One of the most mysterious creatures of the deep, splayed out on a table. 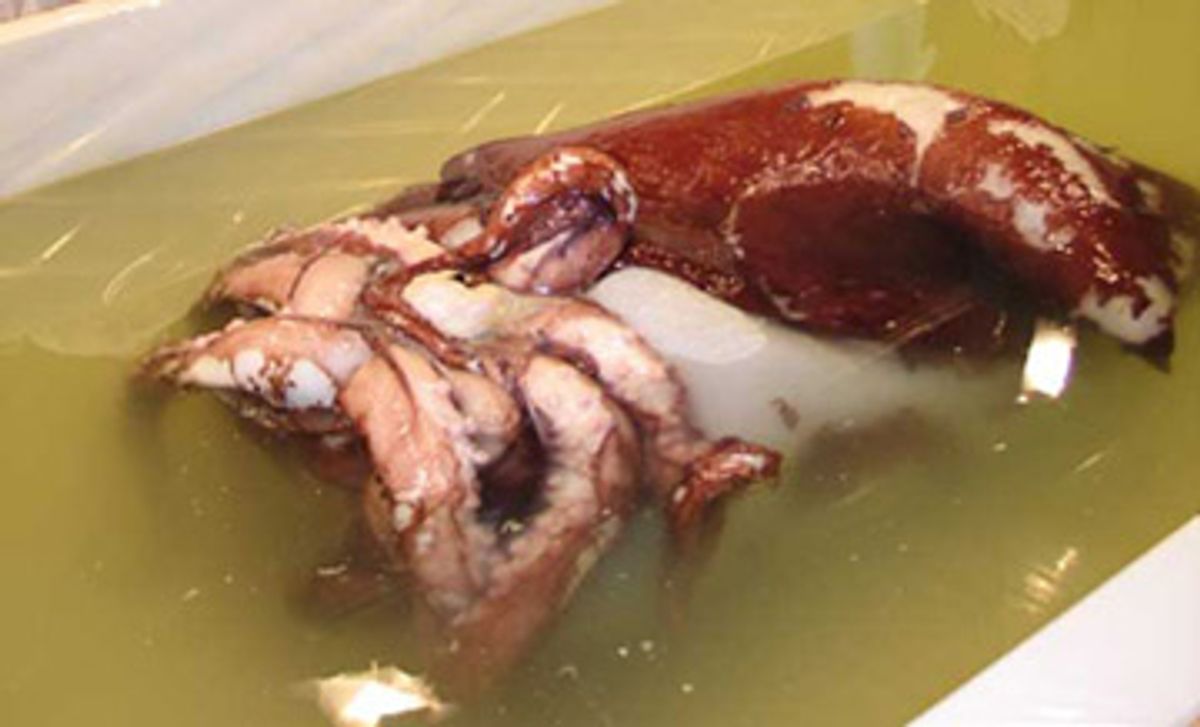 A team of marine scientists in New Zealand is just about to begin examining one of the most mysterious creatures of the deep, Mesonychoteuthis hamiltoni, the colossal squid of myth and legend.

The squid -- which certainly is colossal: 1,089 pounds, 26 feet long -- was caught in Feb. 2007 in deep waters off Antarctica by fisherman aboard the vessel San Aspiring. The fishermen were after Patagonian toothfish, also known as Chilean sea bass, and it turned out, so was the squid -- it was caught in a net, eating a toothfish. The fisherman brought the squid aboard and froze it.

Now the squid is at New Zealand's national museum, Te Papa Tongarewa, where scientists are preparing to examine it in an effort to learn more about how the rarely encountered creatures roll.

As the Associated Press notes, no one has ever seen a colossal squid alive in its natural habitat -- its habitat being thousands of feet under water. This specimen is the largest ever caught, and it may be the first male ever caught (scientists have yet to determine its sex).

Scientists will also be examining two other recently caught squids. One is a smaller colossal squid, and another is a giant squid, a different sort of very rare, huge (but less than colossal) squid of legend (famous from the depiction of the squid locked in battle with a sperm whale).

Researchers at the museum have been blogging about their squid thawing and examining venture. They write,


From the measurements taken by the scientists, Dr Steve O'Shea and Dr Tsunemi Kubodera, while examining these specimens, it will be possible to determine just how big this species grows. At 495 kg the San Aspiring specimen is the largest known invertebrate on the planet - the question is: Does this species grow even bigger, do larger squid exist?

Preliminary measurements of the beak sizes, and the size of beaks found in the stomachs of sperm whales suggest that colossal squid weighing upwards of three quarters of a tonne may exist!

The unfolding and subsequent examination -- including removal of the stomach, beak, and mouth -- of the colossal squid begins at 9 a.m. New Zealand time on Wednesday, April 30.

Here are the many feeds available to watch the show live:

Four cameras on the same page

If you miss it, don't fret. The museum says that the Discovery Channel will air a show about the colossal squid later this year.