On "Hard Candy," the 49-year-old disco queen gracefully walks a tightrope between sex, motherhood and aging. 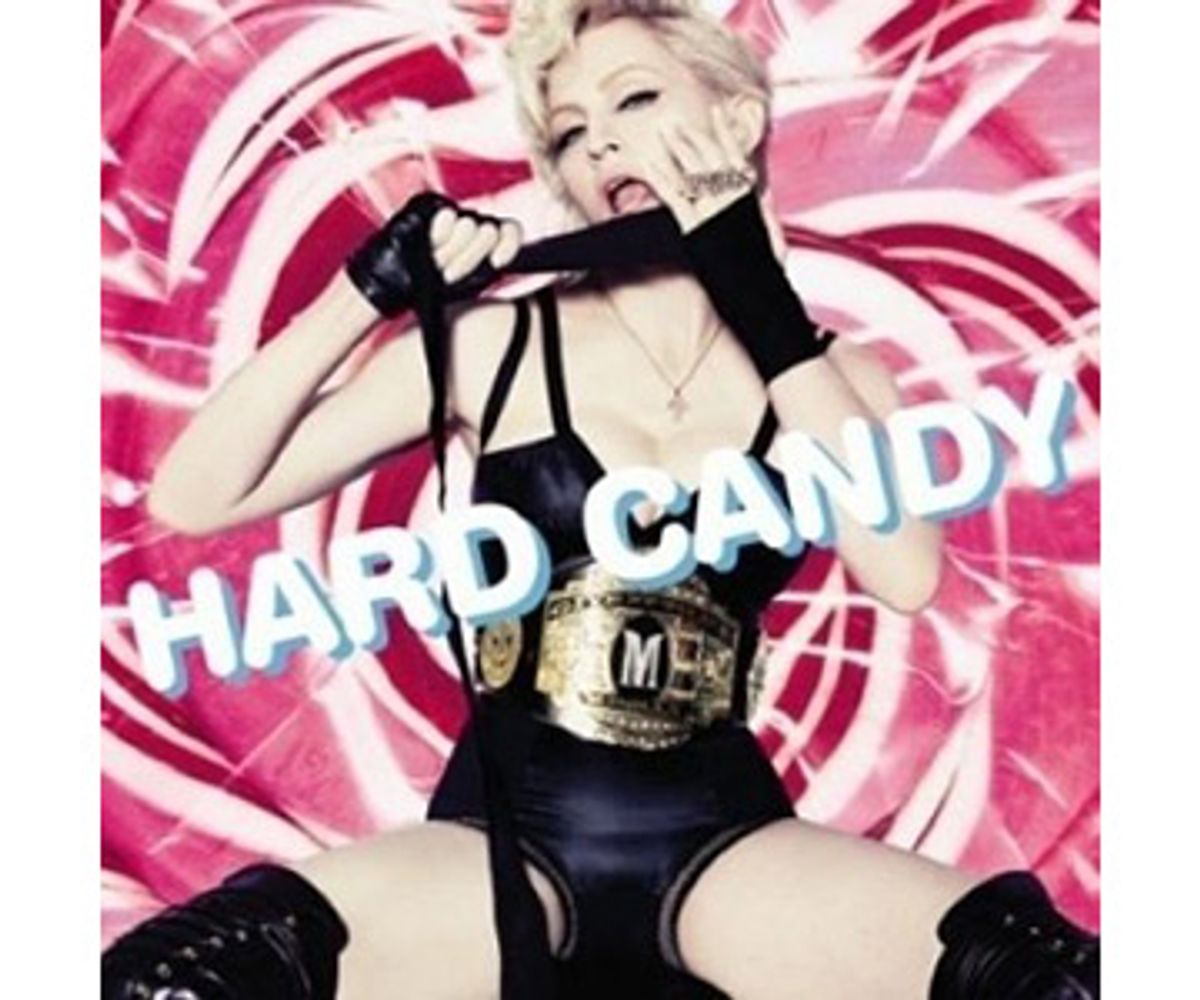 Of Madonna's multiple personalities, the least complex are the best known. But by now, the overly ambitious pop queen and the hands-off sex goddess have become as ho-hum as the insincere crooner of mid-'80s cheeseball ballads was grating. The underappreciated but ultimately more influential Madonna has always been the multifaceted feminist of "Deeper and Deeper," "Papa Don't Preach" and especially "Like a Prayer," who can't control her own desires, doesn't need to control yours, and blames her parents for any faults she cares to admit ("Oh Father").

Vulnerability makes that version of Madonna sympathetic but not weak. She exists in harmony with the one who encourages fans to verbalize their feelings and get down, sometimes simultaneously ("Express Yourself," "Into the Groove"). It's hard not to side with her when she embarrasses herself by trying to go confessional or political, gets too artsy, or reveals too much flesh ("American Life," "Bedtime Story," "Justify My Love," "Sex"), and it's always delightful to see her recover from gaffes that would obliterate someone else's career. Madonna's at her most compelling when even her blunders expand our view of what's possible for women. Now that she has nearly reached 50, becoming an elder stateswoman in a dance-pop world that makes no room for them -- well, occasionally Cher -- her longevity becomes yet another attraction, even if you're only morbidly fascinated. Like those buff bantams Mick Jagger and Iggy Pop, she's a sexed-up wax figure of her former self. How old can a disco queen get?

She must fear irrelevance, but if so, her distress signals remain in the subtext. She has chosen to share writing and producing power with Timbaland, Justin Timberlake and Pharrell Williams/the Neptunes. These guys are all ripe for the production guru scrap heap, not because they've lost their juice, but because they're overexposed. The closest collaboration between Madonna and these three titans on "Hard Candy," the apocalyptic top-10 single "4 Minutes," seems to acknowledge their fear of becoming passé. It has the urgency of an action film climax -- "I'm out of time and all I've got is four minutes," Timbaland informs us -- but without an actual movie tie-in, those four minutes might represent the length of a hit song, suggesting that everyone's 11 minutes of fame have already passed.

"American Life," M's 2003 stab at an overtly political, confessional record, proved her least popular. So for 2005's "Confessions on a Dance Floor" Madonna returned to her disco moppet roots, but with a difference -- she didn't attempt to re-create the past, she only ripped it off. She was never a unitard-wearing, Capezios and feathered-hair chick like the one she plays in the video for "Hung Up." Those types probably grossed her out back then. When some nut spliced together that song and "Grey Gardens," the Maysles brothers' 1975 documentary about Jackie Onassis' cousin Edie (who, to summarize, got stuck in the 1920s), it underscored the point that the joke was not on Madge. "Time goes by/ So slowly," Madonna sang, but only Edie was fooling herself -- not Madonna, who goes on to qualify the statement: "for those who wait."

"Hard Candy" sculpts and buffs the renovated nymphet of "Confessions" to a brilliant sheen. It's like one of those Yoko Ono sculptures made of a bronzed version of one of her old sculptures. If the songs seem straightforward and simple, with titles like "Dance 2 Nite," "Beat Goes On" and "Give It 2 Me," it's because they are. Only a few bother with a metaphor, like "Candy Shop," or tell a story, like "She's Not Me." Thematically, they are in exactly the mode of manufactured disco performers of the late '70s like (you might not recognize so many of these names) France Joli, Rosebud, Taka Boom or Musique. In other words, she's mining her original source material -- the same songs that informed and shaped the Madonna of "Burning Up" and "Physical Attraction." Could be blah, but Williams, Timberlake and especially Timbaland seize on these disco clichés and make them sound remarkably fresh.

For "Heartbeat," Williams swipes the beat from Timbaland and Nelly Furtado's "Promiscuous," and adds retro-sounding Donna Summer/Giorgio Moroder synthesizers, and the occasional cowbell. Over a surprisingly poignant melody, Madonna defends her ongoing, almost visceral commitment to club life: "It may feel old to you/ But it feels new to me," she tells us. "When I dance I feel free/ Which makes me feel like the only one/ That the light shines on." Sounds as honest as she'll ever get. The production's delightfully plastic, as some of her surgery might be also, but Madonna doesn't stretch credibility by trying to sound younger. Aside from using the term "pimp your style," she doesn't jam any rap slang or teen-speak into these songs, nor does she try to fill them with media-ready catchphrases like two of her collaborators did on the way overquoted "Sexyback."

The honesty is important: Madonna has managed to throw parenthood into the mix without losing too much of her edge, or seeming like a bad mother. If the idea of a 50-year-old woman inviting you to try her "raw, sticky and sweet" confections, as she does on "Candy Shop," sounds off-putting, first check your ageism and sexism, then recognize that the song can work in terms of parenting too -- especially, I'd imagine, the adoptive kind. If you came from poverty in Malawi, and Madonna made you her kid, you'd certainly find her candy-shop lifestyle irresistible. This tightrope M walks between sex, nurturing and aging on "Hard Candy" is more than most rock-star parents, let alone middle-aged ones, could manage gracefully. (Hey, Britney!)

Short on philosophy and long on groove, "Hard Candy" might be the friendliest Madonna record since her debut, not including "The Immaculate Collection." The songs about sex and dancing simply invite you to dance and have sex, no dysfunction necessary -- more important, they make you feel like you might actually want to do one or the other, maybe both. The love songs find Madonna in a position of resolute sorrow -- jilted on "She's Not Me," the victim of multitasking on "Miles Away" -- that's all the more convincing because of its ironic understatement. "Uncomfortable silence can be so loud," she observes. You may even learn a few phrases in a foreign language from the moderately goofy "Spanish Lesson."

Fortunately, her Kabbalistic, truth-seeking side doesn't get special treatment on "Hard Candy," despite the fact that Malawi has changed Madonna into Mahatma. She has fused it with the dance goddess. On "Dance 2 Nite," Timberlake helps her upgrade her values without sacrificing a shred of fun. "You don't have to be beautiful to be understood," she finally admits. "You don't have to be rich and famous/ To be good." But evidently it helps.