Forget those parenting books, forget what your friends do. "Opting In" author Amy Richards wants mothers to listen to someone else -- themselves. 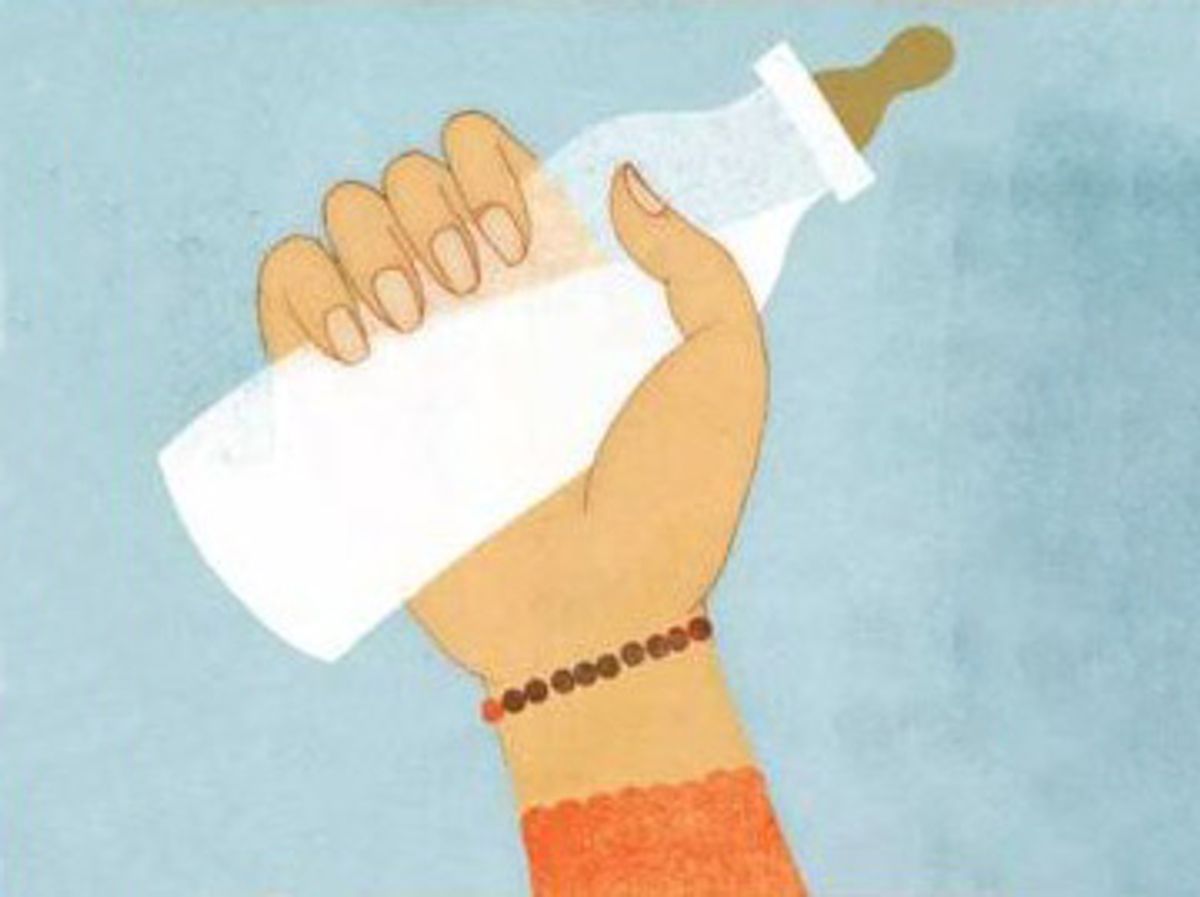 For Amy Richards, as for a lot of women, labor pains began way before her first child came knocking. As she recounts in her new book, "Opting In: Having a Child Without Losing Yourself," she couldn't decide whether to have her son in a hospital, in a birthing center or at home. It was a very personal decision, and yet she nervously cast about for second opinions: "What did 'the books' say? What were my friends doing? And of course, I couldn't escape the celebrity mom aspect; I mean, what did Gwyneth Paltrow do?"

Anxious and confused, Richards decided on a different approach -- she would think for herself. She was, after all, a longtime feminist activist, co-founder of the Third Wave Foundation and coauthor of "Manifesta" and "Grassroots." What she learned from that episode is essentially the message of her book: "Each woman wants different things; thus the feminist goal should be figuring out what you want."

Richards knows that's easier said than done. Mothers are on the receiving end of a barrage of criticism -- from the media, from society, from women's rights groups themselves, often inflexible about what makes "a feminist mom." No wonder they feel so insecure. Unlike in previous generations, most women today expect to go to college, to have a meaningful job and, if not to conquer the world, at least to have a place in it. But motherhood can unsettle them. How can they reconcile their political beliefs with the more "traditional" longings that sometimes accompany motherhood? How do they know what messages to listen to and which ones to tune out?

Those are the questions Richards aims to answer in "Opting In." The title is a play on "The Opt-Out Revolution," a controversial article by Lisa Belkin published in the New York Times Magazine in 2003. The piece argued that well-educated women are increasingly eager to give up prestigious careers to stay home with their children, and it has framed the "mommy wars" ever since, largely confining the debate to one issue -- whether to go to work. But Richards opens up her discussion to a range of parenting challenges -- including fertility, birthing, home equality and her relationship with her own mother. Alternating between memoir, cultural criticism and feminist analysis, Richards encourages women to ignore the messages that make motherhood about absolutes and simplistic dilemmas. If motherhood is going to be a less harried and more equal enterprise, she suggests, it has to be about more than changing diapers. It has to be about changing ourselves.

Salon talked with Richards, the mother of two boys (2 and 4), by phone from her home in New York.

Motherhood continues to be a hotly debated topic. Why is the media so obsessed with what mothers do and don't do?

I think the media sadly is invested in keeping women insecure about themselves. If they're insecure then they're more likely to read the media and be invested in the media's telling them right from wrong. I'm not a terribly cynical person, but the media is sustained by the advertisers, so there is somewhat of a correlation between the products being sold and the stories being told.

Are women more anxious about parenting now than in the past?

I absolutely think women today feel more frozen in their choices. In another era, women lacked choices when it came to parenting. It was just sort of, "This is what you do and this is how you do it." And that felt punishing. But with the greater range of choices today, I think women feel equally imprisoned because there is more of a hierarchy around good and bad choices.

There are so many books written on motherhood. What do you hope to bring to the discussion with "Opting In"?

The main thing I was trying to do was move the conversation beyond women's deliberations about whether to work or not work. When I titled the book "Opting In," I meant to say, opt in to your own life, make yourselves aware of the options that are available to you. Because I think women approach motherhood rather passively and just let it happen instead of seeing themselves as the active agents they are or could be. So I have chapters about our relationships with our friends and mothers, as well as our husbands or our same-sex partners. I'm trying to show how parenting affects all aspects. Assuming it only affects the workplace trivializes how much parenting takes over our whole lives.

Also, I wanted to challenge the way that feminism -- while it prioritized motherhood from the early days of the movement -- hadn't completed that part of the revolution. In recent years, mothers have not been a priority within feminism and have been overshadowed by other issues like the working girl and abortion. I wanted to encourage feminists to revisit some of those issues, and perhaps understand why younger women weren't gravitating toward feminism.

What can the feminist movement do to change course, to challenge the perception that it has failed mothers?

I think the feminist movement has created just as rigid an image of what a mother should be as society has created -- a very different version, but nonetheless it has created a stereotype of who is a good feminist mother. Organizations like NOW, for instance, have a Parenting Bill of Rights that promotes these specific mandates that qualify for feminist parenting. And while I don't want to be misrepresented as watering feminism down, I also want to acknowledge that our choices are never going to be pure.

What stops so many people from wanting to identify with feminism is the belief that they're never going to be able to do it in a pure way. So rather than being judged for doing it wrongly, they don't do it at all. But I want more people to take the risk. Just taking the risk is going to make society look different.

What are some of the risks women can take?

I think a lot of it is the responsibilities in the home. You poll most couples, and women are still -- even if they are working outside the home as much as their husbands -- the primary caregiver in the home and are still primarily responsible for the home. Some of that's because men haven't stepped up to the plate, but some of it is because women haven't pushed for control. And to me it's sad that women don't feel confident enough to own who they are as individuals and thus hold on very tightly to the role of mother.

You have a chapter on diaper duty. What did you learn about that power struggle?

One of the things I've observed with a lot of heterosexual couples is that men often stop doing more because they're tired of being told they do it wrong. So sometimes the way to get men to help is to not dictate how it gets done -- even if it means you go and spend the night at your girlfriend's or mother's house so he knows what it's like to get up and get the kids out of the door to go to school. Also, don't get caught up in superficial things. "You can't put him facing out in the Baby Björn, you have to carry him facing in!" Who says?

I also think that women don't know how to ask for things for themselves. They're so much better at asking for it on behalf of someone else. When you have kids, what you're really asking for is just respect from your partner and help in your life. I think some of the bitterness is born because we're masking our real motivations.

I think for stay-at-home mothers, asking for help can cause tension, because husbands may think, "But you don't help me with my job. Why should I help you with yours?"

But being a writer and an activist affords a lot of flexibility. What do you suggest for women with less accommodating jobs?

I think some women have been surprised when they've gone to their employers and been more honest about their conundrums. They've been able to create unique scenarios. This is not everybody, of course. There are definitely people with employers who say, "No way. Do it my way or you leave." But I think one of the more productive ways to [frame the issue] is not actually "work-family" but "work-life," so you're not creating a hierarchy between parents and nonparents in the workplace in which parents are seen as getting "perks" that other employees don't get. When you couch it in terms of "work-life" it opens it up to the entire workforce. So people will be like, "Yeah, I'm tired of using my sick days to go take care of my mother."

You argue that we often don't take advantage of the laws that are already there. But in some cases -- especially for lower-income women -- the laws still need work. I was surprised to learn that 78 percent of people can't afford to take the parental leave they are entitled to.

And the parental leave in the U.S. only applies to companies that have 50 or more employees. So the laws need to be fine-tuned and articulated. But I do think sometimes the last leap for us is believing in the equality we fight for. I see it so much in mothers who say, "Ugh, asking my employer to pay for my leave is just asking for too much." We need to really believe it, not just argue for it.

At one point, you write, "I've come to measure my success as a parent not in the usual way, by how well-adjusted my children are, but by how well I am doing."

I have an anecdote in "Opting In" where I talk about going to my son's pediatrician after he was born and being shocked that the doctor was always asking about me. And then I realized it is a good measure, because if you're so focused on your kid's every need it is depleting who you are as a person and it is masking something. But if you're doing well, it's likely that your kids are doing well. I also have a line in there where I say I'm intentionally not a stay-at-home mom because I don't want to be blamed for every mishap. When you've made parenting your life, any foible becomes your fault. And women really start to internalize that.

That doesn't mean that I don't deliberate constantly, or that I am not constantly sleep-deprived, or that I don't feel like I make compromises. I think the difference comes back to one of expectations. I never thought parenting would be easy. I just choose to accept my path rather than constantly complain or deliberate about it. I want parents to have an outlet for their frustration and their anxiety, but I also want them to be empowered enough to stop complaining and start enacting.

Ashley Sayeau has written on culture, politics and women for a variety of publications, including the Guardian, the Nation and Salon. She is currently writing a memoir about cultural and class divides in America.