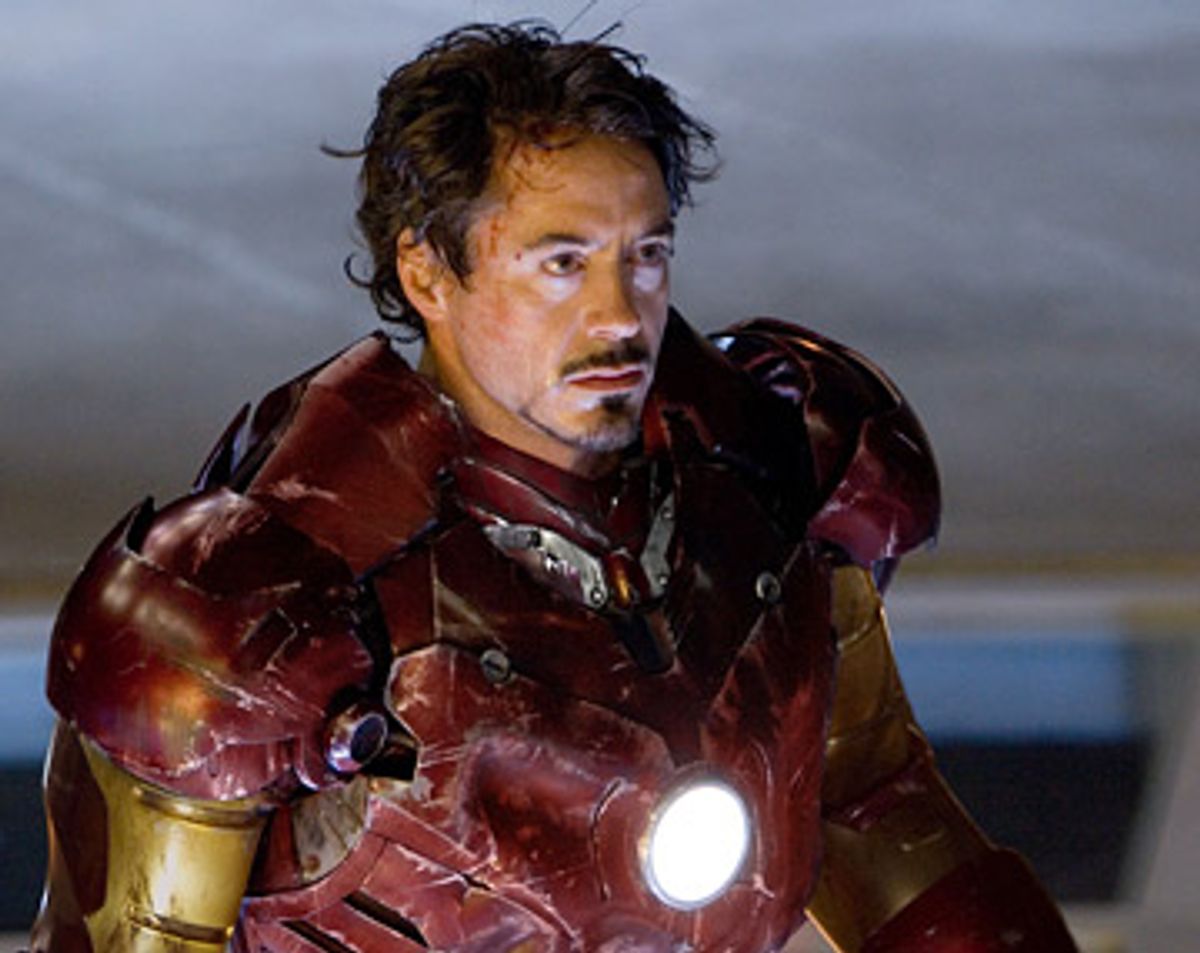 Tony Stark, the human alter-ego of the comic-book superhero Iron Man, isn't a tortured soul but a relatively happy guy: A rich playboy industrialist who's made his fortune off weaponry (Iron Man's creator, Stan Lee, modeled Stark on Howard Hughes), he doesn't have to don a custom-fit suit of armor to overcome past trauma and pain, or to prove his worth either to himself or to the world.

Maybe that's why the casting of Robert Downey Jr. in Jon Favreau's always entertaining and at times inventive "Iron Man" is so inspired. Downey is an actor who can melt hearts with his eyes; why should he bother to melt metal? Iron Man isn't that kind of superhero anyway: He hasn't gained superpowers after being bitten by a spider, and there are no extraterrestrial rocks with the capability to drain his power. Iron Man is a self-made superhero -- he designed and built his protective suit himself -- who, after having a change of heart about how he's amassed his fortune, decides to make amends by fighting evil instead of continuing to build the weapons that allow it to thrive. But there's still something touching about seeing Downey, an actor capable of expressing such intense vulnerability, cloaking himself in an armored, jet-powered suit, one that both protects him from the harshness of the world and gives him the means to alleviate that harshness. Downey's Tony Stark is a symbol of the regular old garden-variety pain inside each of us. Who wouldn't like to retreat, now and then, into a flexible armored shell?

"Iron Man" works well enough as your standard comic-book blockbuster, and it features the usual assortment of computer-generated effects, some of which are quite nifty: When we see Stark perfecting his suit design in his high-tech workshop, his CAD/CAM images spring to 3-D life, wrapping themselves around him as if they were made of fabric and not just cross-hatched lines. But Favreau and his writers (Mark Fergus, Hawk Ostby, Art Marcum and Matt Holloway) still keep the focus on the actors.

The movie opens with Downey's Stark rumbling through desert territory (we later learn it's somewhere in Afghanistan) in a Humvee, accompanied by armed soldiers. The convoy in which he's traveling is ambushed; Stark is wounded and captured. When he comes to, bruised and battered and lying on a dirty striped mattress, he learns that the only thing keeping him alive is the set of wires connecting his heart to an old car battery. A gentle-spirited physician named Yensin (played, beautifully, by Shaun Toub) has rigged this setup to prevent the shrapnel in his body from reaching his heart and killing him.

Yensin has been pressed into service by the group of insurgents who have captured Stark: Their plan is to have Stark build one of his super-duper weapons for their own evil purposes. Stark agrees to meet their demands, but only as a means to escape. And so, with Yensin's help, he finds a way to patch up his ailing heart and build a rudimentary metal suit that will change his destiny.

The other figures in Stark's orbit include his loyal assistant, Pepper Potts (a strawberry-blond Gwyneth Paltrow, outfitted in the kind of slender, dark-hued secretary suits that, in comic books, always mean business); his best friend and right-hand man, military guy Rhodey (Terrence Howard, bringing a dash of class to an undersize role); and his longtime business partner, Obadiah Stane (Jeff Bridges), a jovial chrome-dome who, very obviously, can't be trusted, especially when he realizes that Stark's change of heart is going to be very bad for his bottom line.

Favreau (whose other pictures include "Zathura: A Space Adventure" and "Elf") obviously had some fun with the special-effects sequences, including the one in which Stark test-drives the flight capability of his new suit by shooting through the skies above Los Angeles. (The final version of the suit is a gleaming, futuristic-retro bronze-and-red number that looks invincible, except for the place where Stark's new, improved heart glows through.)

The movie's climactic battle scene is mildly thrilling -- although it's not nearly as exciting as simply watching Downey and Bridges work together. Bridges makes a great villain precisely because he's such a relaxed, affable presence. With his wide, easy grin, and a way of walking that you might describe as an ambitious, calculating amble, Bridges' Obadiah is the kind of guy who'd greet you with a hearty clap on the back -- you wouldn't notice the plastique he'd stuck there until it was too late. Obadiah and Stark have been friends and colleagues for years, and they tease each other in a way that suggests the ragged, comfortable nature of the relationship -- and which makes Obadiah's betrayal that much more painful for Stark.

And although Downey spends a certain amount of screentime inside that suit, his face still carries the movie, giving it emotional weight. At one point, after Pepper has saved his life -- and muttered something about just doing her job -- he gazes at her face as if seeing her for the first time, and says, "I don't have anyone but you." How long does it take a writer to come up with, and type, that kind of line -- a few minutes, maybe? But Downey turns it into an expression of yearning and human frailty that soars beyond the simple capabilities of language. He's airborne, even without the suit.