Even an Air Force colonel who once prosecuted detainees here is condemning military commissions at the prison as politicized and unjust. 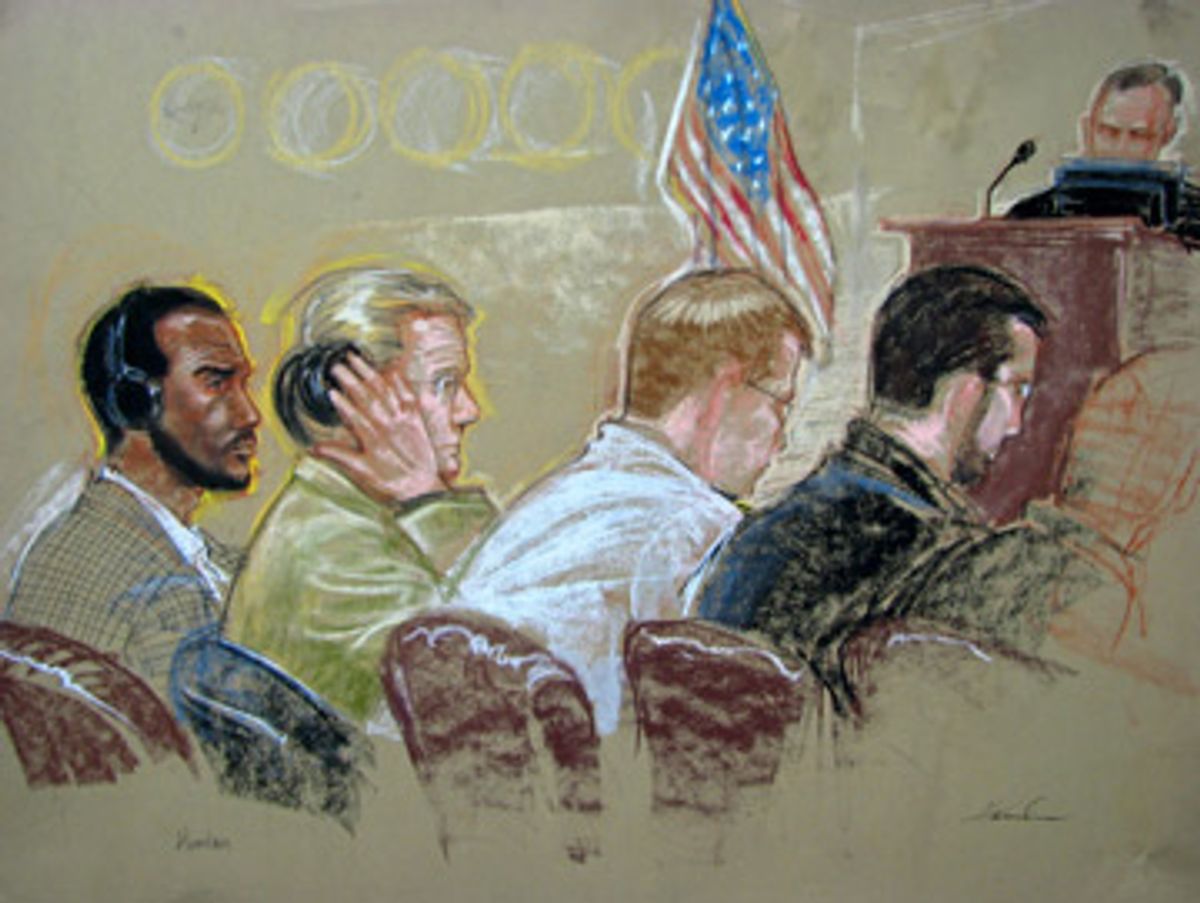 "Everyone tells me the law. But where is the law?" asked Salim Hamdan, in a courtroom here on Monday morning. Hamdan was dressed in his khaki prison garb, his forehead wrinkled and eyes dulled, his shoulders hunched. The 37-year-old detainee's military commissions case once made it all the way to the U.S. Supreme Court, which delivered a powerful rebuke to the Bush administration in Hamdan's favor. But you wouldn't have known it now, nearly two years later.

By Tuesday afternoon, Hamdan had reached the conclusion that there was no law in Guantánamo. Or at least no law that could justify his continued presence at his trial.

The military judge, Navy Capt. Keith Allred, tried to convince him otherwise. "You should have great faith in the law," the judge urged. After all, it was Hamdan's previous court challenge that led the Supreme Court in June 2006 to strike down the first round of military commissions as unlawful. "You won. Your name is all over the law books," the judge said.

But the victory was short-lived. Four months later, Congress passed the Military Commissions Act, authorizing another system of commissions to begin -- and the government charged Hamdan once again.

"You even won the very first time you came before me," Allred added.

And that too was true. When Hamdan first appeared before Allred in June 2007 -- in his second round with the military commissions -- the judge concluded that he did not have jurisdiction over Hamdan and dismissed the case. Whereas the military commissions' authority is limited to cases brought against "unlawful enemy combatants," Hamdan had been determined to be an "enemy combatant" -- a term that encompasses both lawful and unlawful statuses.

Within months, however, Allred's decision was overturned by the hastily assembled Court of Military Commission Review. Hamdan was brought back before the military commissions for round 3. He was charged with conspiracy and material support to commit terrorism based on allegations that he had served as Osama bin Laden's driver and bodyguard and helped transport weapons to al-Qaida.

Hamdan was then rewarded by being moved from a communal living setting to what is effectively solitary confinement. His lawyers say he has suffered a serious deterioration in his mental health as a result, becoming increasingly despondent and embittered as time goes by.

On Monday, an initial attempt to boycott the system in which he is trapped -- Hamdan has now been in U.S. custody for more than seven years -- quickly devolved into the most basic of requests: to be able to use the toilet without being watched.

And to locate the law.

For the next day and a half, Hamdan, now changed into a flowing white robe and a black-and-white checkered suit jacket, sat quietly at his counsel's table, listening intently and waiting for the law to appear. But in a commission system in which the government asserts the right to continue to detain even those who are ultimately acquitted, the law can be hard to find. And the proceedings this week did little to assuage concerns that the rule of law will ever prevail at this prison conceived and continued under the Bush administration.

First to take the witness stand on Monday was Air Force Col. Morris Davis. Once the chief military commission prosecutor, Davis resigned his post in October 2007 in protest and has since become one of the system's boldest critics.

Davis strode into the courtroom with the same confident air he once wielded as a fire-and-brimstone prosecutor. But his message has changed. He took a seat about 10 yards away from the prosecutor's table he'd formerly occupied. Now he explained -- on behalf of the defendant that he once charged -- the many ways in which the commissions system was politicized and unfair.

His first year on the job had been relatively free of interference, Davis explained. But by September 2006, 14 so-called high-value detainees -- including Khalid Sheikh Mohammed, the alleged mastermind of the 9/11 terrorist attacks -- were transferred from secret CIA detention facilities to Guantánamo. Soon, the Military Commissions Act was passed, and presidential elections were on the horizon.

These events conspired against Davis' prosecuting approach. It was like "the train leaving the station before the tracks were built," he said. He said that he butted heads with the Department of Defense's then-general counsel, William Haynes II, and Brig. Gen. Thomas Hartman, legal advisor to the top Pentagon official overseeing the military commissions process. Neither of them could understand why he was taking so long to put together the cases, why he would refuse to introduce evidence obtained through waterboarding (or other approved torture techniques), and why he insisted on declassifying evidence so that trials could be held in open proceedings.

In August 2007 he reportedly was told that he better get cracking on the high-value detainees before the 2008 presidential campaign got too far under way. It was a clear attempt to railroad cases to trial and get convictions, without regard for principles of fairness and transparency. The underlying theme, Davis said, was that 9/11 suspects had better be charged soon, to make it hard for the next president to stop the process.

When Davis was put directly under Haynes' chain of command, he finally quit. "I would not take direct orders from a guy who said waterboarding was A-OK," Davis said, glancing sidelong at his successor and former colleagues who had stayed on the job.

On Tuesday, Hamdan's lawyers tried to suppress the use of statements taken from Hamdan by law enforcement officials (far from any battlefield), without ever informing Hamdan of his right against self-incrimination. Under virtually any other legal regime -- the court-martial system, federal criminal law, state criminal law, the Constitution and international law -- these statements would be deemed inadmissible.

Lawyers for the Bush administration, however, insisted that was irrelevant. True, these statements from Hamdan might be suppressed under a different legal system, they acknowledged, but not here. Not in the special courts designed solely to try alien, unlawful enemy combatants. In these courts, the only law that mattered was the Military Commissions Act, and its protections against self-incrimination did not apply to any statements made before the trial began.

After a break, Hamdan changed out of his formal wear and returned to the courtroom in his prison garb. He was ready to call the process quits. He apologized to the judge. He praised his lawyers. He smiled and even laughed and joked a little. But he had made up his mind.

"The law is clear. The Constitution is clear. International law is clear," he said to the judge. "Why don't we follow the law? Where is the justice?"

Hamdan pleaded for a fair trial, reminded the judge of his Supreme Court victory, and questioned why the U.S. government then proceeded to change the law and keep him locked up. "Is it just for my case?" he asked.

The judge listened intently and patiently. He thanked Hamdan for expressing his frustration. He promised to do everything in his power to give him a fair trial. He promised Hamdan a chance, after seven years' confinement, to finally hear the evidence against him. He told Hamdan he would finally be able present his own side of the story.

But Hamdan's central question remained: "By what law will you try me?"

The judge responded with the only answer he could: The military commissions law passed by Congress in 2006.

"But the government changed the law to its advantage," Hamdan replied. "I am not being tried by the American law."

And Hamdan left the courtroom, having made clear that he would no longer participate in a commissions system unmoored from American criminal law, the Constitution and international law.

The court closed down for the night. It reassembled in the morning and went straight into scheduling. But its star figure was missing. A trial date was set for June 2. With or without Hamdan.