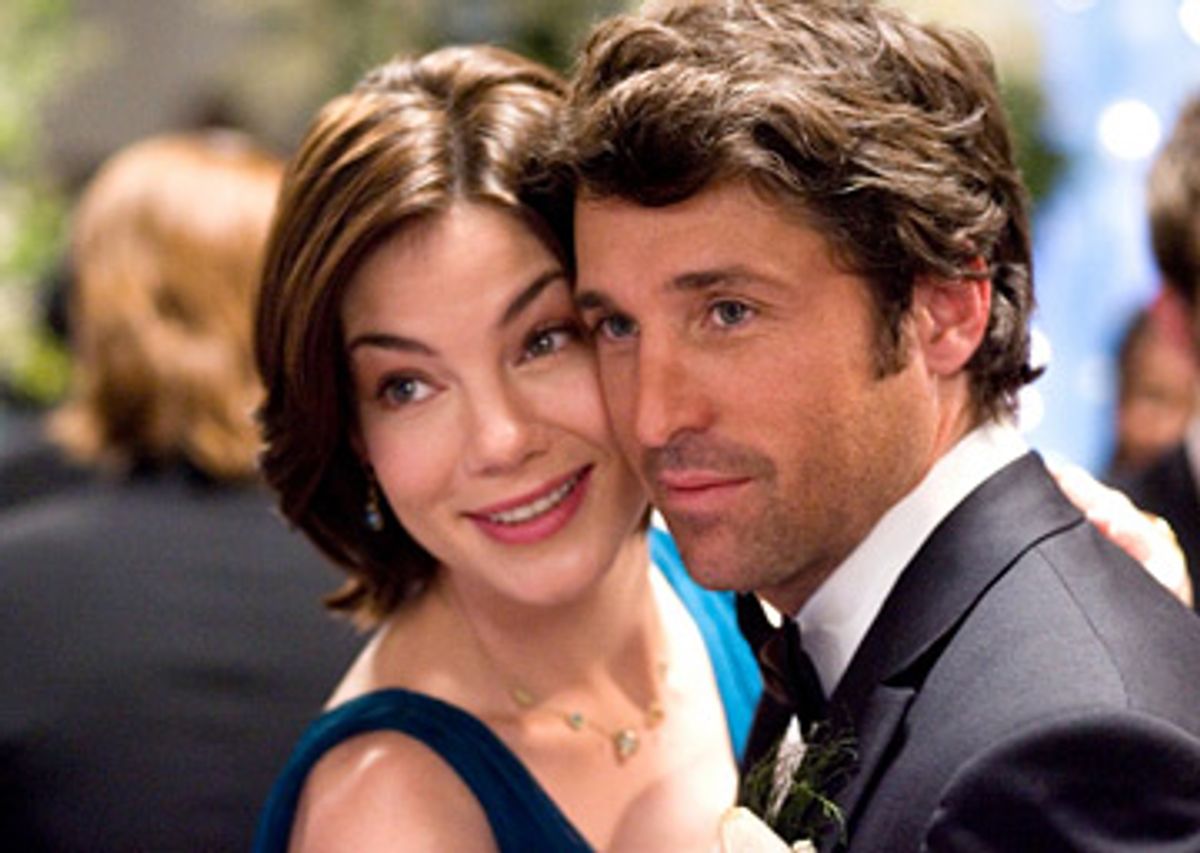 Faces -- interesting ones, attractive ones, expressive ones -- have always been a major part of what draws us to the movies, and it's clear that the big selling point of "Made of Honor" is the raffishly semishaved mug of Patrick Dempsey. Dempsey plays Tom, a playboy millionaire who professes to be perfectly happy dating his way through New York. This supposedly carefree life is circumscribed by certain strict rules, which he observes as if they'd been handed down from Moses himself: He refuses, for instance, to see the same woman two nights in a row, and when he reminds a comely blonde of this fact (he's on his way out the door after having spent the night with her), she responds with a sultry pout. The suggestion is that Tom's revolving assortment of girlfriends don't mind playing by his rules: Mostly, they're just thrilled to have been given a toss by a rich, allegedly gorgeous and supposedly charming rapscallion. And did I mention that he's rich?

But the one woman Tom really loves -- he just doesn't know it yet -- is his best friend from college, Hannah (Michelle Monaghan). He can talk to Hannah about anything. She's smart, vivacious and adorable. They dash around the city as if it were their personal playground, sharing plates of cake and doing lots of movie-montage-style shopping for antiques. It doesn't dawn on Tom that Hannah is perfect for him, until she leaves town for a six-week business trip to Scotland, where she falls in love with -- and becomes engaged to -- a rugged, titled gent named Colin (Kevin McKidd). She asks Tom to be her "maid" of honor, and he accepts, for the sole purpose of using his bridesmaid status to steal her for himself.

You can tell exactly where "Made of Honor" is headed in the first five minutes, although that's not the major problem with it: Sometimes smart writers and a director with a crisp sense of timing can make even the most tired premise sing. But there's no energy, no spark, in "Made of Honor." Even its clichés -- including a dashing rescue on horseback -- are trotted out with bland indifference. The director is Paul Weiland, who made "City Slickers II," as well as numerous episodes of the British TV show "Mr. Bean"; the script is by Adam Sztykiel, Deborah Kaplan and Harry Elfont, from a story by Sztykiel. Almost nothing in this movie clicks in an emotionally satisfying way. Monaghan is a mischievous, appealing actress -- she played a devilish pixie of a femme fatale in Shane Black's underappreciated 2005 "Kiss Kiss Bang Bang" -- but she's given almost nothing to do here except twinkle appreciatively.

Maybe that's because the star of this very dismal show is Dempsey, the "Grey's Anatomy" actor who goes by the nickname "Dr. McDreamy." I don't happen to get Dempsey -- there's something calculating about his so-called boyish charm that turns me off -- but I could probably tolerate him if the movie around him at least pretended to be about something other than his supposed good looks. He has one lovely moment in which he kisses a Scottish dog on the lips, but he can't forge as believable a connection with any of the human actors around him.

I was relieved when Sidney Pollack showed up in a small role, as Tom's father: He's about to be married for the sixth time -- or is it the seventh? Not even he can keep track, and it's clear that his brides keep getting younger. Pollack is given some crude jokes (there's a particularly loathsome gag in which he's trying to negotiate, through his lawyer, a prenup agreement with his bride-to-be that details how many times per week she's required to have sex with him), but he navigates this essentially thankless role with his usual élan and grace. He has a superb scene in which he reflects fondly on the only woman he ever really loved. That woman is Tom's mother, of course, and the dialogue Pollack has to deliver is straight out of the cliché playbook, but none of that matters. "Made of Honor" is a movie that feels made to order. For just a few moments, Pollack gives it a soul.