A reporter flies over the Iraqi capital on her 10th reporting trip, and sees empty swimming pools, kids playing on a grassless field, entire houses buried in trash. 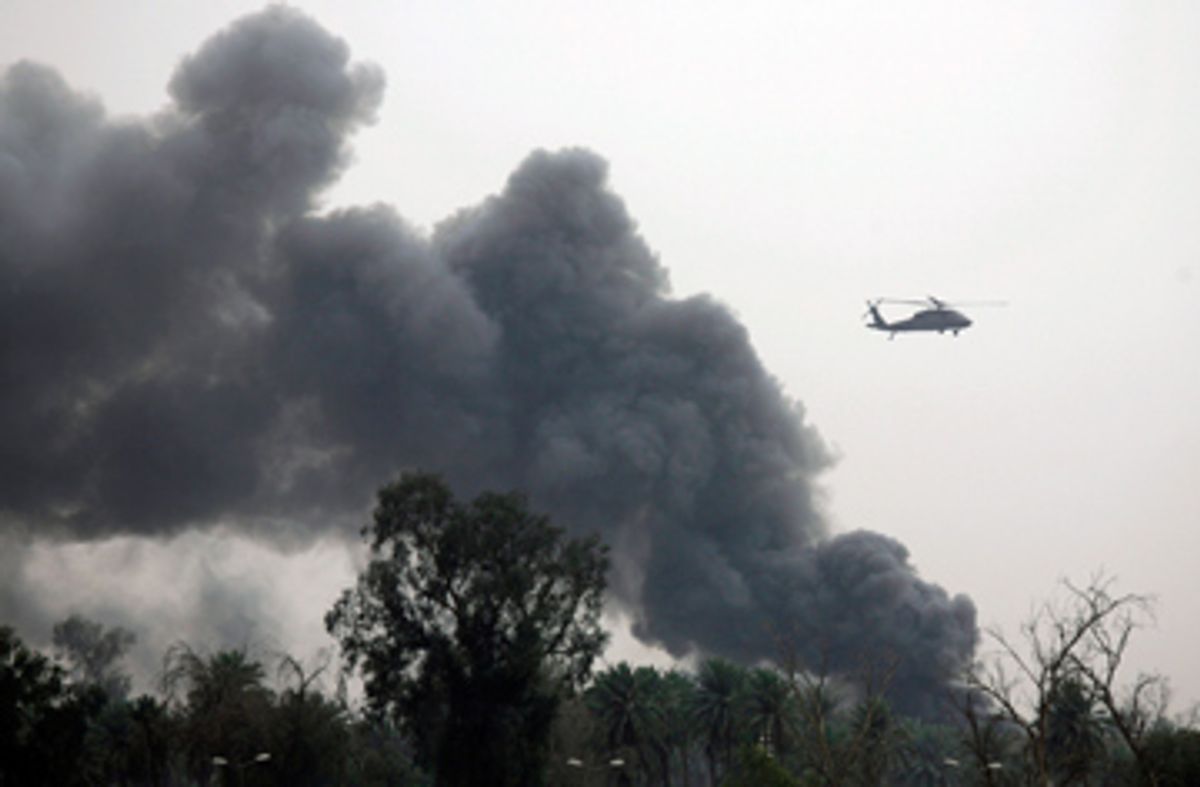 I am on board a big-bellied C-17 military airplane headed for Baghdad. A member of the crew tells me and my fellow passengers that we are about to take off, and instructs us how to use the oxygen masks. Mine, disconcertingly, is a bag that I'm supposed to put over my head and then tie tightly around my neck -- sort of the opposite of what I'd expect to do if I wanted to breathe, but the Air Force guy promises that "the air will flow." Then he warns us to stay in our seats, with our seat belts fastened, for the duration of the flight, because most of it will be "over the combat zone." An Iraqi man sitting across the aisle from me opens the palms of his hands and mouths a silent prayer.

I examine the people around me. They are U.S. State Department officials, defense contractors and Iraqis who work for the Defense Department and for the U.S. Embassy in Baghdad. A gray-haired man is wearing a baseball hat emblazoned with the words, in English and Arabic: "Danger. Stay back." Another man has brought along his Martin acoustic guitar -- solid rosewood sides and back. There is an Iraqi woman, probably a contractor, with three kids, and for a moment I think: "Now here's something to remember -- flying on an American C-17 as a child." Then I realize that they, like all of us, are flying into a war that has ravaged their homeland. They will have childhood memories, and most of them are not going to be nice.

When we land, I get a text message on my cellphone. It is from my Jordanian network provider, Zain, which also operates in Iraq. "Zain JO wishes you a pleasant stay in Iraq," it reads. "Enjoy One Network Services with Zain IQ and feel at home."

This is my 10th reporting trip to Iraq since the war began, and my fifth trip as an embedded reporter. My last trip was in 2006. When I land in Baghdad, I think I am familiar with the travel routine: I will catch a Black Hawk ride from Baghdad International Airport, where I arrived, to the Green Zone, where I will get my accreditation and continue to the 4th Infantry Division, the unit with which I will be embedded for the next 18 days. As I wait on the landing strip for my ride, I notice that since I was here last most helicopter crews have given their Black Hawks names and written them in large black letters on the helicopters' hulls. There's the Dark Angel, all covered in dust. There's the Hillbilly Deluxe. I get to ride on the Nomad, with two Iraqi employees of the U.S. Embassy.

The crew leaves the doors of the helicopter open, and the stench of decomposing garbage pours into the cabin as we fly low over Baghdad. I see kids playing soccer on a grassless field, swimming pools empty of water and entire courtyards and rooftops of abandoned houses covered in trash. Behind the green curve of the Tigris I see the landing strip where I'm supposed to disembark, LZ Washington.

The helicopter lands, but the rotors are still going and it's too loud to talk. I show the helicopter gunner three fingers, like a "W," for "LZ Washington," to ask if this is my stop. He nods. The two Iraqis get out first. I am about to get off, too, but all of a sudden the gunner is yelling at the Iraqis to run and waves violently at me, throws my bags back into the cabin and jumps in, and we take off again, rising sharply and turning. I see a plume of black smoke rising in the air several blocks away. Mortar.

"Lately we've been hit at least once a day, at different times," explains one American soldier when my Black Hawk finally lands and I'm allowed to step out. A siren goes off soon after I arrive, and a male voice, pumped through invisible speakers, announces: "All clear. All clear." The soldier smiles. "Sometimes you hear a siren and then you hear: Boom! It's not a siren, it's a rocket."

American troops blame Shiite militias for lobbing mortars and rockets into the Green Zone, a heavily protected enclave that houses the Iraqi Parliament, much of the Iraqi government and the U.S. Embassy. The shelling has intensified in recent weeks, and in the past month the attacks have killed more than a dozen people, including at least three Americans.

The military press office in the Green Zone is essentially a cluster of air-conditioned metal trailers inside a bunker. Here, I will spend a night under a ceiling of solid concrete. I drop my bags in a large room with Internet access and a few bunk beds and step outside to chat with the Peruvian guards who stand watch here. It is dusk, and the orange glow of the setting sun makes the 15-foot Jersey barriers and dusty camouflage netting overhead look oddly pretty.

"Listen," one guard tells me. I listen. Swallows are shrieking overhead, hunting for flies. I hear generators hum.

"Escucha," the guard insists, shaking his head, and then continues, in a mix of Spanish and English. "Simply escucha. Every day they" -- and he imitates the trajectory of a rocket with his hand -- "Pow!"

An hour later, as I'm checking my e-mail inside the press office, the siren goes off again. "Duck and cover. Duck and cover. Incoming," the voice intones. My stay in Baghdad has begun.