Death and the D.C. Madam

Call girls speak out about the suicide of Deborah Jeane Palfrey and the complicated truths it reveals about their lives. 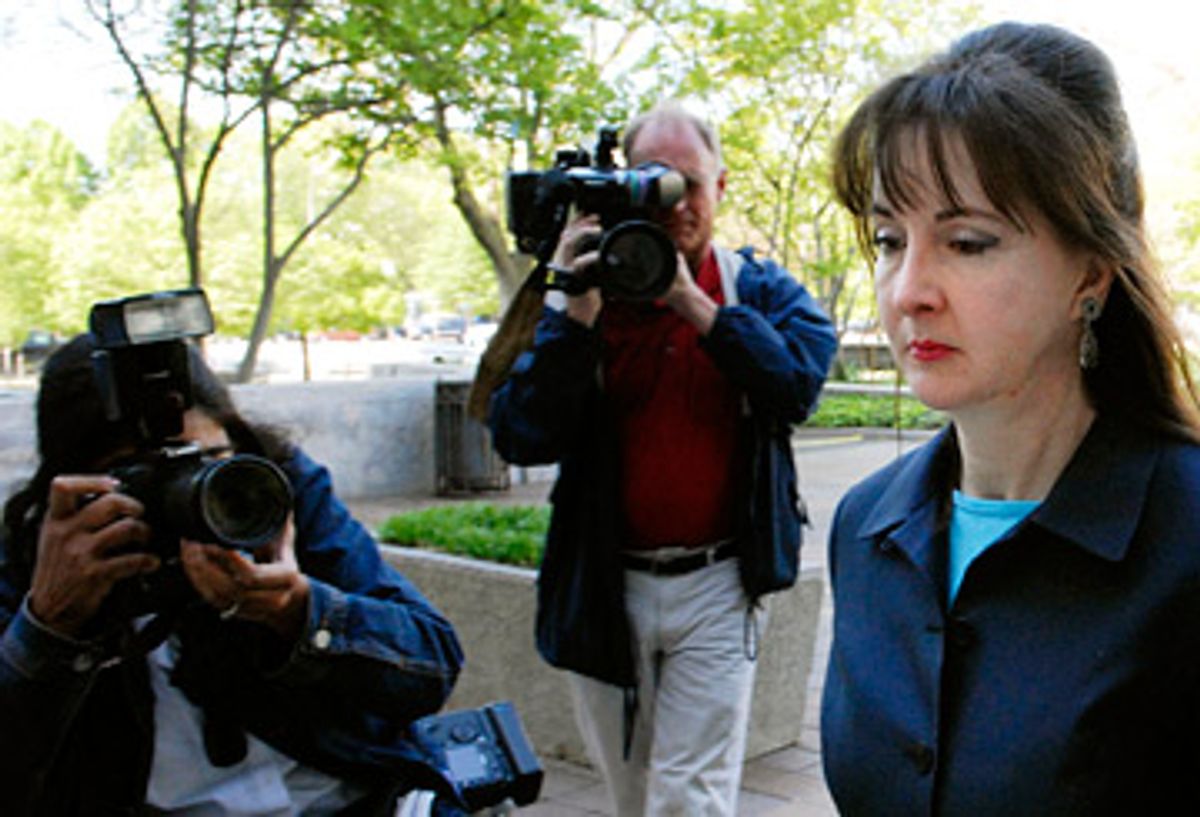 On May 1, Deborah Jeane Palfrey, better known as "the D.C. Madam," was found dead in a shed located behind her mother's Tarpon Springs, Fla., mobile home. Apparently, Palfrey, 52, hanged herself from a metal beam with a length of nylon rope. When her 76-year-old mother, Blanche Palfrey, called 911 just before 11 a.m., the emergency operator asked if her daughter was still hanging from the rafter. "Yes," said the madam's weeping mother, who had regularly accompanied her daughter to court the month previous, "I can't move her. I'm 76 years old."

Palfrey's was one of a recent spate of high-profile political sex scandals, from Idaho Sen. Larry Craig's toe-tapping routine to the fall of New York Gov. Eliot "Luv Guv" Spitzer. It was also another chapter in our ongoing fascination with prostitution -- that mysterious and yet still little-understood profession. (Palfrey entered the business as an escort. Later, she became a madam, claiming she was "appalled and disgusted" by the way women in the sex business were treated.) Sex may be everywhere these days -- heck, adult movie star Jenna Jameson's autobiography, "How to Make Love Like a Porn Star: A Cautionary Tale," was a New York Times bestseller -- but what life is really like inside the American sex trade remains a mystery. Mostly, Americans have been fed one of two myths about sex workers: the "Pretty Woman" story about a hooker with a heart of gold, or the Jezebel tale about a woman who leads moral men astray by virtue of her sexual wiles.

In more recent years, thanks to a growing number of call girls, strippers and other sex workers using blogs to tell their stories in their own words, we've seen a more complex and nuanced tale. And it's one we don't seem to be able to get enough of. HBO and Showtime are launching competing series focusing on working girls -- "Sex and the City" creator Darren Star is turning Tracy Quan's "Diary of a Manhattan Call Girl" (which began as a column on Salon) into a dramatic series for HBO, while Showtime will begin airing the U.K. series "Secret Diary of a Call Girl," based on the blog turned book by Belle de Jour, next month.

Though Palfrey's death is complicated, not to mention controversial, it does offer us some insight into the experience of sex industry workers, who bear the burden of a double life and the toll of secrecy. I contacted three women, currently chronicling online their past and present lives as sex workers, to speak to them about their reactions to Palfrey's harrowing tale and how sharing their own stories might keep them from a similar kind of darkness.

Melissa Gira is a San Francisco-based sex worker and Valleywag reporter who last year co-founded Bound, Not Gagged, a group blog written by and for sex workers, because of the Palfrey case. Tired of so-called experts speaking for sex workers in the mainstream media, Gira created the site as a forum where working women could express their opinions, reactions and frustrations. The day the blog launched, Gira found Palfrey's phone number, called her and spoke with her briefly about the project. "I was shocked she picked up the phone, she knew what a blog was, and she wasn't immediately distrustful," Gira says.

Upon hearing of Palfrey's death, Gira felt a jumble of emotions: confusion, anger, sadness. "Her story represented our story," she says.

Gira is angry about the way female sex workers are vilified when stories like these go public, while the men involved "go back to their job or they quietly leave." From among the 15,000 names in Palfrey's potent little black book, only three boldface names surfaced: Louisiana Sen. David Vitter, a married Republican and father of four who apologized for his "very serious sin" and kept his job; U.S. ambassador Randall L. Tobias, who as Bush's "AIDS czar" had publicly denounced prostitution and resigned after his outing; and Harlan K. Ullman, a retired Navy commander known for developing the shock-and-awe doctrine and who told Brian Ross of ABC News that he had gotten only massages from the women involved, not had sex with them, and stated that the experience was "like ordering pizza."

"If I was in her position I would have papered the walls of that shed with the sheets of my client list," says Gira.

Although Gira is frustrated by the media's relentless representation of sex workers as victims, she is also suspicious of the circumstances surrounding Palfrey's death. It has been a question circulating since: Did Palfrey actually kill herself? In fact, Palfrey had stated in numerous interviews with members of the press that she would rather commit suicide than return to prison. Washington, D.C., writer Dan Moldea, who got to know Palfrey while considering writing a book about her, told reporters that Palfrey had told him, "I am not going back to prison. I will commit suicide first." At the time of her death, she was awaiting her July 24 sentencing, and authorities in Florida have reported that several suicide notes were found at the scene. Either way, Gira says, Palfrey's death has had a "chilling effect" on at least some sex workers, who, now fearing for their own lives, are more reluctant than ever to reveal themselves.

Another sex worker I spoke with, who writes online about her call girl experiences but requested anonymity for this story, was pained by the news of Palfrey's death as well as the related older news of the death of University of Maryland professor turned call girl Brandy Britton, 43, who killed herself in January 2007 while awaiting trial on prostitution charges. Britton was a one-time employee of Palfrey's; after Britton was found hanging in her living room, Palfrey pronounced, ironically: "I guess I'm made of something that Brandy Britton wasn't made of."

The call girl I interviewed was struck by the emotional stories behind these public deaths. "The first thing I thought about was the incredible isolation that both of them probably felt," she said. "Because you're doing something that's perceived to be so morally wrong that you're immediately outside society, as a prostitute or a madam. You've got this secret life or a compartmentalized life, and then to be pushed out there and villainized -- I can only imagine the incredible isolation they must have felt."

As a sex worker, she went on, you live a "double life." A madam whom she worked for before she went freelance was intensely paranoid, "crazy," prone to anxious late-night phone calls. "It got to her. She would call me up and panic, thinking they were out to get her. It was the psychology of sex work, the fear of being outed."

When the call girl I spoke with worked at an agency, she says, she was kept isolated from other women. Then, when she started writing online about sex work, all that changed. "I know the moment I started blogging about it at length, I started connecting to other women online. It made a huge difference. I stopped feeling alone. I stopped feeling like I had to hide everything from anybody. It felt as though I had a connection to the outside world that I didn't have before." After all, sex work is not easy. "You have these very intimate connections, but you're totally disposable with clients. You're a ghost moving through their world."

Palfrey's story, she says, is "heartbreaking," but at its core, she believes, Palfrey's final act reveals more about America than the madam. "It's sort of unsurprising that somebody like Palfrey could feel driven to suicide -- because of the shame of being in the sex work world."

Bree Daniels, a former call girl who named herself after the prostitute who helps a private detective catch a call girl killer in the 1971 film "Klute," blogs at One Shady Lady about the three years she spent as an escort in New York and California. Or at least she blogged until recently. (Her boyfriend isn't crazy about her blogging in the present tense about her past life.) She launched her site after the Spitzer story broke because she was sick of the way sex work and sex workers were being depicted in the media. "I think I was feeling extremely angry at all the misinformation and the double standard that it's acceptable for boys who will be boys, but women who do this are basically like the devil's minions." Instead, she says, "I wanted people to understand more about the business from someone who had been in the business." Daniels worked in the corporate world before getting into escorting for the money. "I think there's a misconception that women in the business are all sexually louche, and that we're damaged. When I started I'd had sex with eight people." In high school, she could have been voted least likely to become a call girl. "Most people always said I looked like a librarian."

When Palfrey was indicted, Daniels wrote her a letter. "I wrote to her when it all broke out last year, just saying if you hadn't made a copy of your records, you should leave them with everyone you know, just in case." The dangers inherent to sex work are very real, Daniels underscores. "You can lull yourself into a false sense of security, and then when something happens, you realize that you're totally expendable, that nobody cares. You feel so powerless. And I think a lot of women just choose not to think about it -- because it's the only way that you can get through it and do the job." In the beginning of her escort career, before setting out on her own, Daniels worked for a madam. "I came to two realizations," she says about that experience. "I could do what she was doing myself and keep all the money. And the second thing was if I turned up dead, she would be calling up her Mafia buddies to have my body dumped in Jersey. She didn't care about me."

Madams -- who are, essentially, female pimps -- can be "the most mercenary individuals on the planet," she says. She adds, however, "Not all of them are that way."

In the end, Daniels quit the business because she was "burned out." Sometimes, she misses the camaraderie among the women she worked with in the sex business. "They say there's no honor among thieves, but there's a lot of honor among these women. And that to me is the best thing that I take away from all this."

Melissa Gira, for one, is optimistic that one day Americans will see sex work as real work and sex workers as real people. After all, she says of Palfrey's death: "I don't think this was a suicide of concession. If anything, it's 'You're not going to take me alive.'"