As a racing fan, I've learned to accept injuries as a consequence of a sport. But I also understand the revulsion at the filly's destruction. 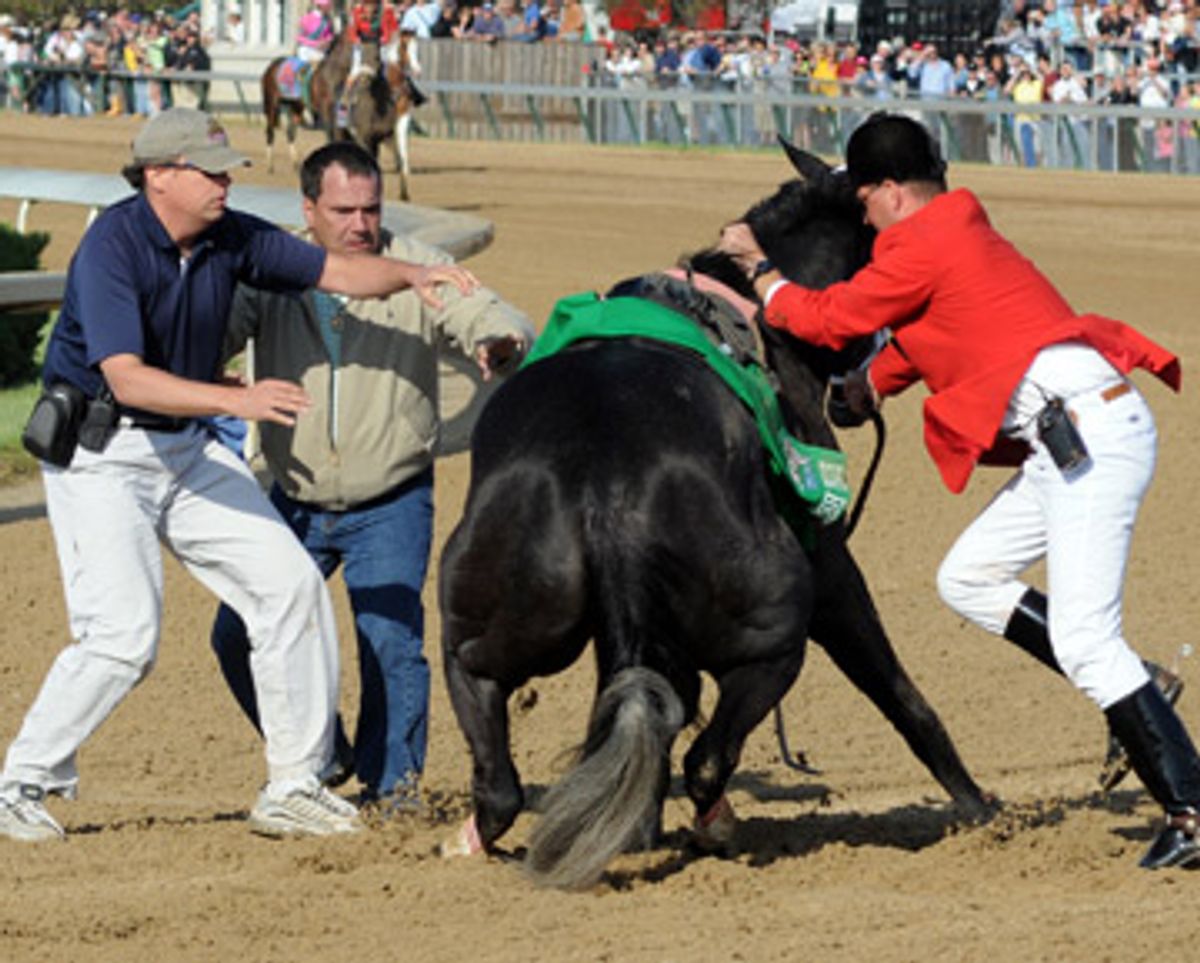 The worst horse racing injury I've ever seen wasn't Eight Belles in Saturday's Kentucky Derby. It was Landseer at the 2002 Breeders Cup. I was sitting in the stands at Arlington Park, behind the turn. As the horses wheeled past for the stretch run, one of Landseer's hind legs snapped in two. His pastern hung by a tendon as he hobbled forward on three legs. I turned away from the gruesome sight, looking back only to see Landseer loaded into an ambulance. Minutes later, he was put to death.

As a racing fan, I've learned to accept injuries as a consequence of a sport in which spindly-legged animals sprint at high speeds. Horses are fright-and-flight animals, instinctive runners who sometimes run themselves to death. It happens in the wild, and it happens on racetracks. But I also understand the revulsion of sports fans who tuned in to the Kentucky Derby -- probably the only horse race they'll see all year -- and watched it end in a filly's destruction.

In the first half of the 20th century, when racing was one of the most popular sports in America, most fans had ridden horses on farms, or seen them pulling carts and carriages down city streets. They understood the animals' weaknesses and were not as shocked by death on the racetrack. It's more difficult for modern audiences to bear.

The loss of Eight Belles, just two years after Barbaro's breakdown in the Preakness, has reinforced the arguments of horse racing's harshest critics, who consider the sport a barbaric animal exploitation spectacle. One writer even compared racing to bullfighting. That's extreme. Horses are sent onto the track to run, not to be killed. Eight Belles was one of the few who ran fatally hard.

As Eight Belles galloped out after the race, her forelegs suddenly collapsed, and she pitched her rider, Gabriel Saez, into the dirt. The filly had suffered condylar fractures in both ankles. Unable to stand up, she was euthanized on the track. "It's a complete freak injury," says Dr. Celeste Kunz, a veterinarian with the American Association of Equine Practitioners. "It's shocking."

A specialist in racetrack injuries, Kunz saw nearly 200,000 horses race in a decade. In her experience, only two horses have broken both legs at once. Kunz thinks Eight Belles' injury may have begun when she "switched leads" during her stretch run. (When a horse is running on the backstretch, it leads with its left leg. Once it turns into the stretch, it changes its gait, leading with the right leg.)

"I watched the replay, and when she switched leads to her right front and landed awkwardly, under fatigue, that was the beginning of the catastrophic injury," Kunz says. "Once she sank into the right ankle that was fractured, and then switched her weight to the left front leg, the excessive pressure and velocity caused that ankle to dislocate, and that's when she collapsed."

Eight Belles didn't die because she was a filly, running over her head in a race against colts. Just last year, the filly Rags to Riches won the Belmont Stakes. Eight Belles died because horses are oddly designed creatures. They have no muscles below the knee, and their hooves are essentially nails. One thoroughbred owner I know says horses "run on their middle fingers." Thoroughbreds are especially fragile, carrying enormous bodies on legs as spindly as a Kenyan marathoner's. Compare the stocky legs and platter-size feet of a Percheron or a Clydesdale, and you'll see why racehorses are so easily broken.

"Thoroughbred racehorses are 1,500 pounds, and they're landing on probably 4 inch-by-4 inch hoofs, one foot at a time," Kunz says. "So, the fact that we don't see this often, and this is actually a rare injury, is just a testament to their anatomy."

During a race, thoroughbreds accelerate to 40 miles an hour, and at that speed, one misstep can be the last. "Horses are poorly constructed creatures and sometimes put their feet down the wrong way," says Steven Crist, editor and publisher of the Daily Racing Form, the sport's leading newspaper. Crist believes Eight Belles' injury was "a freak accident, the racing equivalent of being struck by lightning."

But People for the Ethical Treatment of Animals thinks it's a normal consequence of an exploitative, inhumane sport. After Eight Belles died, PETA called on Kentucky racing officials to suspend Saez for whipping the filly in the stretch. (Saez whipped Eight Belles with his left hand, to guide her away from the rail.) PETA wants to ban racing altogether, but failing that, the group would like to see a ban on 2-year-old racing, since a horse's knees don't fuse until age 3 and a half. "Eight Belles was too young," says PETA spokesperson Lisa Lange. "Her joints and her bones were not fully formed."

In fact, Eight Belles ran five times before her third birthday, more than all but one other horse in the Kentucky Derby field. As long as there's a Triple Crown, there will be 2-year-old horses racing. Racing that young is essential preparation for the Derby. The last horse to win without running as a 2-year-old was Apollo, in 1882.

Andrew Beyer, an acclaimed handicapper, blames the breeding industry for churning out horses who are swift but susceptible to injury at an early age. "Because buyers want horses with speed, breeders have filled the thoroughbred species with the genes of fast but unsound horses," Beyer wrote in his Washington Post column. "As this change in the breeding world took place, the sport was allowing the use of pain-killers and other medications that are forbidden in most other countries. They allow infirm horses to achieve success, go to stud and pass on their infirmities to the next generation." Eight Belles' grandsire, Kentucky Derby winner Unbridled, has a record of fathering flash-in-the pan horses who run blazing times as 3-year- olds, then are never seen on the track again.

Horses that delicate may require more forgiving footing. The thoroughbred experts were far ahead of PETA in calling to replace dirt racetracks with softer, synthetic surfaces. In 2006, my home track, Arlington, was the scene of a horrific string of horses dying during or after races. In one case, groundskeepers brought a screen onto the track, and held it in front of an injured horse while a veterinarian administered a fatal shot. The carcass was winched into a van and carted off.

The next year, Arlington plowed up its dirt track and replaced it with Polytrack, a synthetic racing surface composed of polypropylene fibers, rubber and silica sand, all beneath a wax coating. It's much more forgiving on a horse's joints. In Arlington's first season with Polytrack, the number of fatal injuries dropped nearly 50 percent. Other tracks have seen more dramatic improvements. Turfway Park, which put down the first synthetic surface in North America, saw fatalities drop from 24 to 3. California racing officials were so impressed they mandated rubberized tracks across the state.

"California had a problem with catastrophic injuries on a dirt track, and we were looking for an alternative to make racing safer for horses," says Dr. Rick Arthur, equine medical director for the California Horse Racing Board. Since California adopted synthetics, breakdowns have been cut in half, Arthur says. The surfaces "absorb more energy. In other words, they have more bounce to them." Since June 2007, synthetic tracks have averaged 1.47 fatalities per 1,000 starts, compared with 2.03 for dirt.

But the Triple Crown races are still run on dirt, the traditional surface, and tradition dies hard at Churchill Downs. The Kentucky Derby is the world's most prestigious horse race. Winners command six-figure stud fees. (Horses who raced on Polytrack performed poorly in this year's Derby. Monba and Adriano, winners of important Derby preps, finished 19th and 20th. Colonel John, a California horse who had never before run on dirt, went off as one of the favorites, but came in sixth.) As long as the Derby is run on dirt, trainers will prepare their horses on dirt, as Eight Belles was.

But don't blame the surface for Eight Belles' accident, says Crist of the Daily Racing Form. She was the first fatality in the 134-year history of the Kentucky Derby. "There is no proof that there is a lower incidence of breakdowns on synthetic tracks than on well-maintained dirt tracks, which includes Churchill," Crist says. "Maybe the synthetics will prove marginally safer in time, but if tracks had spent half the money fixing their dirt tracks as a handful have spent on $10 million synthetic installations, I'd bet those dirt tracks would be safer too."

I can understand why the sport's backers like Crist sound defensive. At its best, horse racing is the most thrilling spectacle in sports. Watching Big Brown break loose from the pack in the Kentucky Derby was a way to, vicariously, break loose from our sluggish, two-footed humanity. We were tearing down the stretch with him, faster than we'll ever run in real life.

But at the same time, I understand why horse racing is seen as cruel. It's a sport with agrarian roots, a product of an era when we had a different relationship with animals, when it was acceptable to ride a horse into battle, or work him 12 hours a day pulling a plow. The horse racing industry is far more humane than it once was. Infirm horses are rarely shipped to the slaughterhouse these days. But no matter how many horses it saves, they won't be enough to erase the picture of Eight Belles, trying to stand up on shattered ankles.