Why can't I stop watching the bleakest show on television? Because it's the only way I've found to cope with my mother dying. 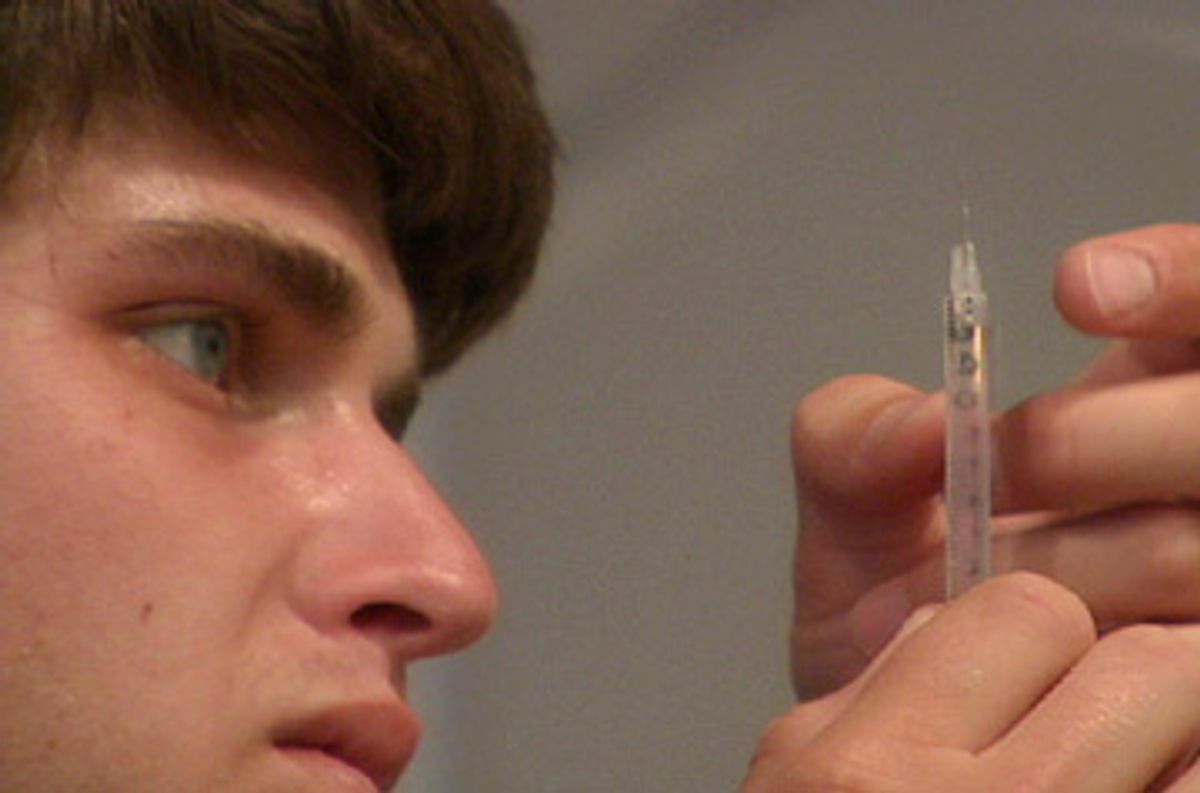 In one of the darkest moments of A&E's bleak reality series "Intervention," Tim, a crack addict squandering a promising career in music, tries to flee the camera, first by wading through a marsh, then by squeezing himself into a storm drain. His girlfriend has just called it quits. In a shallow stream of dirty water, he curls into a fetal position and sobs, making high-pitched, nearly incoherent noises for about 30 minutes. He says he wants to die so often that one of the producers has to cross in front of the camera to make sure he isn't really on the verge of a suicide attempt. Tim is slight and cute in a Mouseketeer sort of way. It's like watching someone torture a puppy. Worse -- it's like watching a puppy torture itself. And I'm at the edge of my love seat, covering my mouth, tears spilling out from my eyes.

My name is James. J-A-M-E-S. And I am addicted to a show about addiction called "Intervention." A lot of people find "Intervention's" gut-wrenching one-hour tragedies too difficult to take. My partner, who loves shows like "The L Word" and "Melrose Place," finds "Intervention" unbearable. He protests vehemently if I turn it on in his presence. It is "too depressing." But I need to watch something too depressing, because I'm facing an even less hopeful situation. A few weeks ago, my mother, DeLora, entered the final stage of Alzheimer's -- the one in which you forget how to eat and starve to death. Recently I went to visit her; her eyes were dull, she slept through most of my time with her. She no longer speaks or reacts to anyone. A recent brain scan confirmed that, as my Uncle Larry put it, "there is almost no activity evident."

DeLora has had Alzheimer's for 13 years. A former radio reporter, she always encouraged my brother and sister and me to think independently and develop creative skills like writing. It was no doubt her influence that drew me to my career as a cultural critic in the first place. I have a difficult time writing about my mother in the past tense because she isn't dead, but her mind is hardly functioning anymore. She's gone, but not gone.

While millions of people have faced, and are going to face, the same difficulty, I know of no one who has figured out an acceptable way to grieve the loss of a mind. For people like my family, who value intellectual curiosity, wordplay and mental interaction, Alzheimer's seems worse than death -- a slow, fatal disease that makes you forget everything and everyone you know, and reduces you to a childlike and finally vegetative state. As if Alzheimer's weren't sufficiently agonizing, my mother's condition came about after what doctors call a group of "mini-strokes," one of which hobbled her left hand -- the one she used to write.

I've come up with a lot of ways to describe the excruciating feeling of losing someone special without having to bury them: It's like white noise, or an impacted wisdom tooth that never gets pulled, or being spit-roasted over a very low flame. What I haven't figured out is a way to alleviate some of that grief as it stretches further over my life. Mostly I cope by dealing with it indirectly. I have made sure that my mother gets good care. I avoid thinking of her as she was in the past. Once, while driving, one of her favorite songs, Stevie Wonder's "As," came up unexpectedly on the CD player, and it triggered a memory of her playing the vinyl version on our record player on a summer day while we waited for guests to arrive for a cookout. Stevie's gospel-tinged song features a "Hey Jude"-size coda in which he wails, a bit absurdly, about exactly how eternally he will love -- "Until the dolphin flies and parrots live at sea/ Until the day that I am you and you are me!" I really should have pulled off the road and wept, but by then I had established a pattern of moving forward despite any emotional flare-ups. I stepped on the gas.

I'm not a weepy guy. I care about a lot of things, but I don't get choked up over many. My mother is partially responsible for this stoicism. As a recently divorced mother of three in the '70s, working and going to journalism school, she did a lot of emotional prioritizing. When my brother and sister or I came to her with a grievance she considered trivial, she'd dryly ask, "Is somebody gonna die?" That benchmark might explain why the stuff that gets my eyes wet leans toward nonfiction, in which real people's lives may be at stake. Fiction's veil of invention creates a natural distance that I find pleasurable, but very rarely does it overwhelm me. What I want is for a work of art to move me on as many levels as possible -- I want it to split my sides, blow my mind, and break my heart -- but I don't think that happens often for anyone, especially not a cultural critic. "Intervention" might not be art, but it always makes me a blubbering fool.

"Intervention" has been running on A&E for four years, but in case you've never seen it, there's an element of deception in the show's premise: The producers lure addicts into providing full access without revealing that their families have planned an intervention. The closest members of the addicts' social network are in on the ruse, and the show intersperses their confessional interviews with scenes of addicts plunging needles into their forearms.

For its bait-and-switch techniques, the Boston Globe called "Intervention" "vile" and "an exercise in fraud." In theory, my favorite show sounds like a hideous and possibly exploitative premise for prime-time fare. (Or worse, an opportunity for wet-eyed earnestness and psychobabble.) The show would not be possible without the ruse, however -- no addict would agree to be filmed. And, for me, "Intervention" serves a higher purpose than entertainment. It has provided a safe outlet for the intense, bottled-up grief and anger I have felt for the last 13 years. "Intervention's" editors leave in only the most intense, private moments of grief -- mothers sink to the floor in fetal positions, sisters wrap their arms around homeless alcoholic brothers. Grown men cry -- usually fathers driven to the brink of their composure. Nothing quite so cathartic has ever appeared on television before. Call it Television of Cruelty.

The show always makes me worry that someone's gonna die, but here's what gets me. I find that as I watch, I care more about the addict's family members than for the addicts themselves. There aren't many substance abusers on "Intervention" who are likable -- constant dosing makes you a pretty boring, obnoxious person, it turns out. But most of them are squandering some kind of potential -- they've forgotten who they are. Tressa had a shot at Olympic gold until she started doing meth; Trent, homeless and doing smack in a culvert, once worked as a four-star chef; Lacey became a millionaire in a divorce settlement. During the intervention, their families and friends remind them of the experiences, values and ambitions that used to guide their lives. Each member of the addict's social network reads a written note designed to remind her who she used to be, and shock her into grabbing a chance to resume a fulfilling life.

The notes are clumsy -- formulaic even -- but heartfelt. The miracle (perhaps because, for me, sloppy prose should have no effect at all) is that this living eulogy generally works. Very few addicts on the show ever reject a tearful offer of a cushy rehab center on the California coast or the Arizona desert, even if, like Laurence, they don't stick with the program and end up drinking themselves to death.

It is also a miracle to me because I would love to do exactly the same thing for my mother. DeLora has forgotten who she is, but no amount of memories and dreams I write down will remind her of that and jar her into resuming her old life. My whole family and our combined writing skills couldn't do that. "I want you back," family members almost always tell the addict on "Intervention." I want my mother back too, but no one ever returns from Alzheimer's. Instead, I get whatever solace and catharsis I can from watching other families remember who their mothers and fathers and brothers and sisters used to be and bring them back into their lives with the delicate power of words and tears.