Hillary's reckless exploitation of racial division could split the Democratic Party over race -- a tragic legacy for the Clintons. 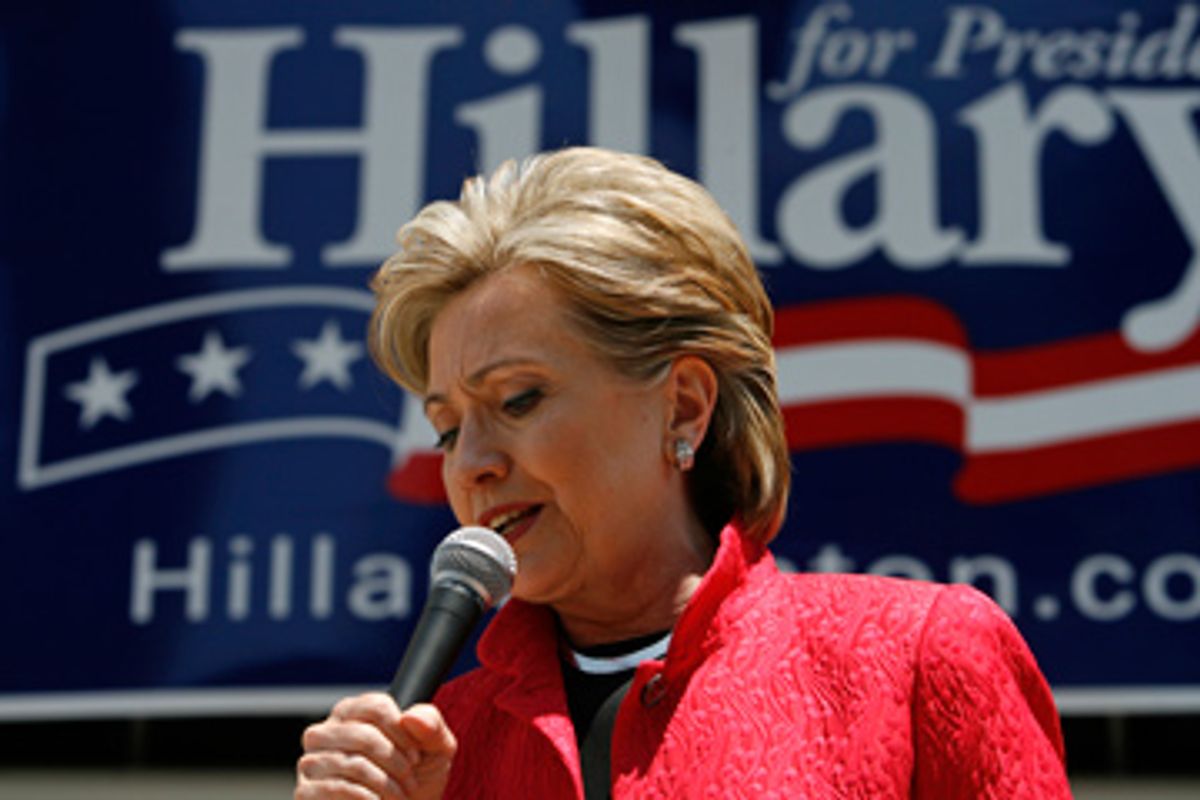 As long as Hillary Clinton is willing to spend the money and energy needed to continue her campaign, she certainly can ignore the pundits who insist that the Democratic nominating contest is over. What she should not ignore, however, is the damage that her increasingly reckless behavior is inflicting on her reputation and that of her husband -- especially when she starts to sound like a reincarnation of the late George Wallace.

When Clinton blathered on about "totally obliterating" Iran in the event it made a nuclear strike against Israel, and then reiterated that same statement last weekend, she made what was, until then, the single most ill-considered comment of the campaign. But now USA Today has published an interview in which she explained again why she regards herself as a more viable general-election candidate than Barack Obama -- except that this time, she crossed a bright white line.

Citing an Associated Press analysis "that found how Senator Obama's support among working, hard-working Americans, white Americans, is weakening again, and how whites in both states who had not completed college were supporting me," she went on to say: "There's a pattern emerging here."

There is indeed a pattern emerging -- and it is a pattern that must dismay everyone who admires the Clintons and has defended them against the charge that they are exploiting racial divisions.

As Sean Wilentz and others have argued, there was no ugly subtext to her innocuous remark about the different roles of Martin Luther King Jr. and Lyndon Baines Johnson in the civil rights crusade, although several prominent Obama supporters promoted that smear. And if Bill Clinton's comparison of Obama and Jesse Jackson was badly timed and clumsy, that too fell within the bounds of acceptable commentary. Indeed, the discussion of ethnic and racial voting preferences is not only fair but unavoidable and utterly mundane in American politics.

But this time she violated the rhetorical rules, no doubt by mistake. It was her offhand reference to "working, hard-working Americans, white Americans" that raises the specter of old Dixie demagogues like Wallace and Lester Maddox. Was she dog-whistling to the voters of Kentucky and West Virginia?

While I still cannot believe she actually intended any such nefarious meaning, she seemed to be equating "hard-working Americans" with "white Americans." Which is precisely what Wallace and his cohort used to do with their drawling refrain about welfare and affirmative action. This is the grating sound of Richard Nixon's Southern strategy, even though Tricky Dick would never quite stoop to saying such things in public.

Of course, Nixon enjoyed a more commanding position politically than Clinton must now endure. She has been reduced to extolling her support from hardworking white folks -- especially those who have "not completed college" -- in an effort to prove that she can build a "broader coalition" in November than Obama.

On the merits of that argument, she could be correct. Despite Obama's appeal to a substantial number of independents and a dwindling number of Republicans, her chances to build an Electoral College majority may well be better than his are, owing to his difficulty in attracting white working-class voters. Yet the chance to make that case where it counts, in the ballot box and the caucus room, expired many weeks ago, when Obama's skillful operatives were organizing circles around the incompetent Clinton team.

It would be awful to see the Clintons depart this campaign with the stain of racial division among Democrats as their legacy. Over the past several months they have found themselves standing against the ambitions and talents of the first black American who could become president. In a situation that demanded sensitivity and caution, both they and their associates have too often spoken and acted carelessly. That the same charge can plausibly be made against the Obama camp does not absolve them.

The tragedy is that neither Clinton carries even the slightest racial animus, as their many African-American friends and colleagues would testify, no doubt. Bill Clinton's first and most dedicated political adversary in Arkansas was "Justice Jim" Johnson, a Klan-backed Democrat turned Republican who was that state's version of Wallace. The Clintons spent years working to defeat Johnson and everything he represented, and he repaid them with years of plotting, scheming and smearing as a cog in the Arkansas Project. He hated them, first and foremost, because they represented the Democratic Party's rejection of white supremacy in the South. As governor, it was Bill Clinton who erased the last vestiges of Jim Crow from the Arkansas Constitution.

So the Clintons probably understand the essential evil of racism better than most white politicians. They have certainly done more than most of today's white politicians to combat that evil. That is why, as they contemplate the conclusion of this campaign, they deserve better from themselves than to encourage doubt about their decency and character.