With a fictional universe of astonishing cleverness and complexity, this is one of the smartest video games ever created. 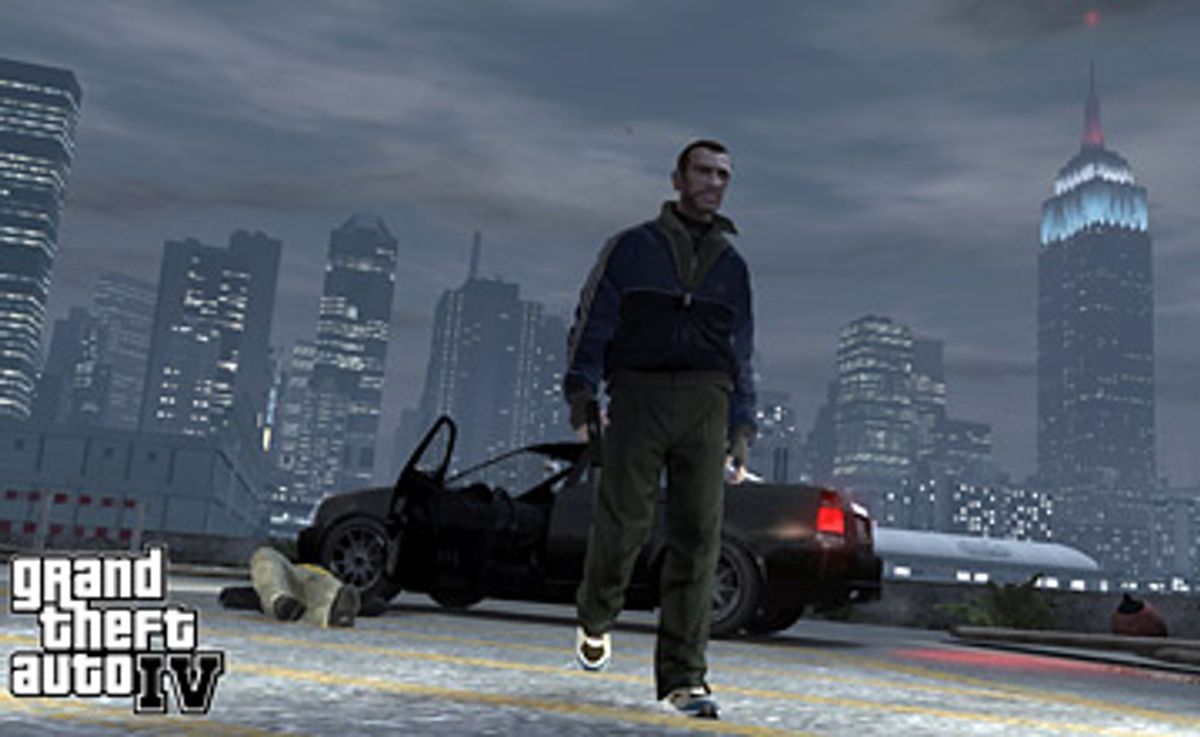 "Grand Theft Auto IV" wears its reputation on its sleeve, most likely in an ambidextrous shoulder holster with a double-mag pouch. Fans of the series come to this latest game, which has already set sales records since its release last week, with high expectations: that its landscape will be lush and flexible, offering endless opportunities to wreak havoc over a tyrannized virtual populace -- but also intricate and clever, stamped with in jokes, futuristic absurdities and wry references to pop culture and politics.

Detractors, too, keep a checklist handy for any new "GTA" release. In a game that aims to re-create the underside of urban life, there'll be guns and crooks and prostitutes and sex and drugs and booze. The combination, under the thumbs of 14-year-olds and re-created in high-def right in your living room, has proved a recurrent boon to the nation's concern industry.

What's beautiful about "Grand Theft Auto IV" is how grandly it both fulfills and tweaks these expectations. This may be the darkest, most realistically violent game in the series, and if you go looking for sin -- as many players do -- you'll find dozens of sequences that'll provoke outrage on the late local news. "GTA IV" allows you to hire prostitutes and then murder them -- need any more be said?

On the other hand, as several reviewers have pointed out, the graphical and narrative realism of "GTA IV" serves, unexpectedly, to diminish a player's blood lust. The game's story line is so absorbing that you aren't really moved to murder random passersby. Its fictional universe is unendingly deep, far more complex than what came before -- not to mention than much of what one finds on TV or at the movies.

This new dimension elevates "GTA" from mere entertainment into something that can credibly, if a little self-consciously, demand to be called art. The more you play "GTA IV," the more real everything in it feels. And it won't be long before you're calling it the smartest video game ever created.

"GTA IV," like previous versions, sets you up as an outsider in the city, where you gain status and notoriety by embarking on a series of missions (murder, robbery, mayhem) for a variety of friends and associates. But unlike the other "GTAs," this one gives each of your associates unique, fully fleshed personalities and characteristics.

The fellow you play, Niko Bellic, is an Eastern European immigrant scarred by unnamed strife in the motherland, and his actions hew to a moral code born of that conflict. Others have odder quirks: the wife of a gang leader who can't stand the monster her husband has become. The ex-con who feels the press of suicide as he adjusts to life outside the can. The girlfriend who's a clean freak, and who, during some off-screen activity that one presumes is sex (the controller vibrates knowingly), ecstatically compliments your conversational skills.

But it's not only that the people you encounter are interesting -- it's also that there are so many of them! I was often struck, while immersed in "GTA IV," at its resemblance to another fictional universe I love, David Simon's in "The Wire." The similarity is not narrative, but rather structural -- understanding the game's world depends on your learning and navigating a web of sometimes mysterious social connections.

As much as it is a driving and shooting game, then, "GTA" is also a puzzle game. The puzzle concerns social relationships: You're working with and for several characters at once, and what you do for some of them affects how you get along with others. In a game known mainly for carjacking, it's surprising how much time you're asked to spend building and maintaining friendships and romantic liaisons -- going on dates to bowling alleys and comedy clubs, hanging out with your pals at bars and pool halls, keeping up with a surfeit of text messages and e-mail (even deleting Nigerian spam).

Where "The Wire" tries to present the modern American city as it is, "GTA IV" gives us the city as it might become. The city here is called Liberty, a stylized riff on New York, but the name's ironic: There's no liberty in Liberty City. Officials pump up terrorism fears, crime is rampant, ethnic tensions are high, and everyone is rude.

It may be too much to say that "GTA" has a message, but it certainly has a vision: It's the dystopian near-future, something like the world of "The Children of Men" (there are no kids here, either).

The vision is pushed by the media your character encounters -- the radio stations, the TV networks, the astonishingly deep in-game Web (with parodies of Craigslist, Fox News, Match.com and other sites, which you access at Internet cafes called TW@).

As you pass through the city, you learn about the end of reading as a pastime, or the new market in selling babies over the Internet, or the extremely elevated terrorist threat -- "Liberty City is now officially on Charcoal 8 Alert, more serious than the Red High 7 Risk Alert, but not as serious as the recently created Black Severe 9 Alert," the game's Fox News analogue, Weasel News, warns.

Crucially, your aim here, unlike in many games, is not to set right what's wrong with this place. I haven't finished the game -- it could take weeks -- but I get the sense that once Niko Bellic has achieved all he can in Liberty City, it will still be the pits.

Win or lose, the world goes on without you.