Guns and water coolers in Iraq

U.S. soldiers drink water, lots of it, in scorching hot Baghdad. Plus, patrolling the streets with a less than disciplined Iraqi army squad. 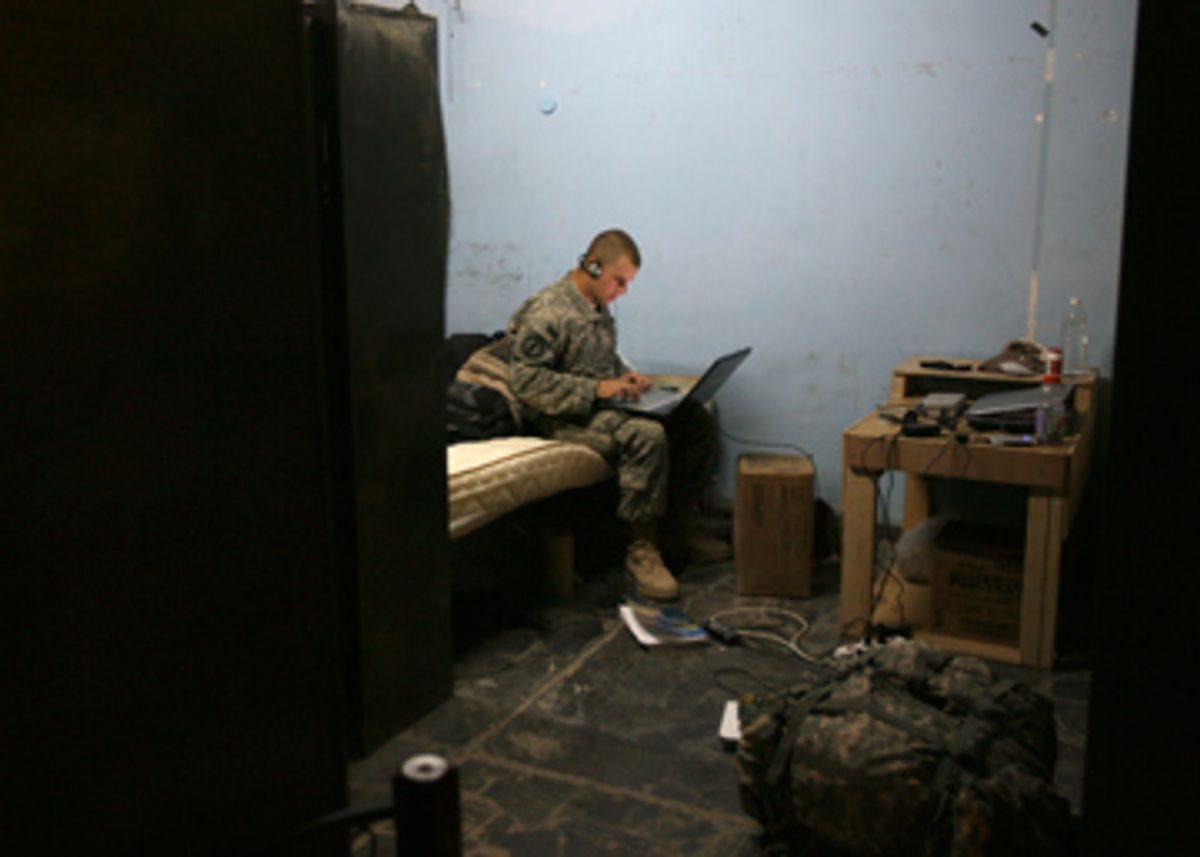 May 7: Guns at the ready (well, mostly, anyway), soldiers of the Iraqi army Muthana Brigade knocked on the door of a two-story house. "Iraqi army!" they shouted, in Arabic. A few moments later, a woman in a full-length dress and a tan scarf on her head opened the door, and the soldiers, on a routine patrol of the southwestern Baghdad neighborhood of Saidiyah, poured in and began searching the house.

Two of the soldiers walked up the tiled stairs to the second floor. Another asked the woman if she kept any weapons in the house. Another asked if he could have a drink of water. One soldier walked into the empty living room where the TV was on, slumped down on the couch, and stared at the screen, his mouth slightly open.

"They're clueless," spits out U.S. Army 1st Sgt. James Braet, who trained Iraqi troops in Baghdad during his previous deployment, in 2005, and who interacts with them during joint patrols here now almost daily. "They are worse than the ones we trained. They don't hold their weapons right, they don't have the discipline."

For three years, the White House has been repeating like a mantra that the ability of the American troops to cut their presence in Iraq depends on the readiness of the Iraqi forces to handle the Sunni and Shiite militias. As the Iraqi army stands up, American commanders and officials like to say, American forces will be able to stand down.

But five years after the Iraqi army was disbanded by the coalition forces and then put together again, from scratch, the Iraqi forces are far from ready to stand up. During the ill-fated attempt of the Nouri al-Maliki government to pacify the Shiite militias in the southern port of Basra, 1,000 Iraqi officers and enlisted men deserted their posts. A Time magazine article recently described how an Iraqi army unit that was supposed to go on a joint patrol with U.S. troops simply slept through the link-up time with their American counterparts. All despite the $20.4 billion Congress has spent on training and building up the Iraqi security forces since 2004, and despite the fact that the Iraqi army has graduated from driving around in pickup trucks and using decades-old Kalashnikov rifles in 2005 to having armored Humvees, helicopters and planes today.

Even the statistics on the strength of Iraqi security forces is unreliable, according to Stuard Bowen, the special inspector general for Iraqi reconstruction for the Defense Department. Iraq says it has 530,000 people in its security forces, including 160,000 in the army. But Bowen said that many of those have been wounded or killed or gone AWOL.

When 1st Sgt. Braet trained Iraqi soldiers, he said, "We lived with them. I personally took them to the range."

But today, he said, "They are trained by the Iraqi army. They have no NCO [noncommissioned officer] structure. The officers are OK, more or less, but the enlisted men don't know anything."

At the patrol in Saidiyah today, the two Iraqis returned from the second floor and declared the house clear of weapons. The thirsty soldier and the soldier who was talking to the woman thanked her and turned to go. And the soldier in the living room kept watching TV until somebody called him and told him it was time to go to the next house.

May 6: In the middle of our interview in an air-conditioned conference room of Alpha Company's outpost, Capt. Andrew Betson says:

"I'm gonna get it before it gets you."

Then he stands up, walks over to the wall behind my chair and steps on a cockroach the size of my thumb.

Just another day in the life of COP 821, a combat outpost in Baghdad's southwestern district of Saidiyah.

COP 821 is one of the 60 or so outposts created by Gen. David Petraeus, the top American military commander in Iraq. The purpose of these outposts, scattered throughout Baghdad's neighborhoods, is to help U.S. troops monitor city life more closely than before, when the troops made forays into the streets from their vast U.S. military bases. This one, occupied by Apache Company of the 4-64 Armor Battalion of the 1st Brigade, 3rd Infantry Division, houses about 100 men, a bunch of dusty armored vehicles and a dog named Goodie. Goodie is a mutt the company adopted and named after Cpl. James Gudridge, one of Apache's soldiers who was killed in January by an explosively formed projectile that cut his body in half.

"Small victories," Betson says, taking a swig from a bottle of cold water. "I'm glad we got these fuckers."

The soldiers don't know for sure what was in much of the compound before Apache Company moved in. Some say the giant hangar, which now hosts windowless sleeping quarters and a gym, was a warehouse; others say al-Qaida used it to store materials its members used to make explosive devices. The large mess hall, which has power sockets that stick up precariously from the floor, was said to have been an Internet cafe, but when the troops arrived here it was filled with rubble.

In the paved courtyard there are some pull-up bars and a basketball hoop. The gym has an infrequently used ping-pong table, weights and two treadmills. The treadmills were bought in Iraq and no one uses them, maybe because in order to plug them in the soldiers would have to unplug the water cooler.

Water coolers are everywhere, and a leaflet in the company tactical operations center reminds the soldiers to rehydrate all the time. Summer temperatures in Baghdad can reach 130 degrees, but this week the weather is mild: 100 degrees, partly cloudy.

Also, unlike bigger military bases in Iraq, which open their mess halls to the troops only at certain hours, COP 821 allows its soldiers to rummage through the mess hall any time they want. Granted, there isn't much to eat: a hot breakfast of scrambled eggs (from a packaged powder), pancakes and sausage, and a hot dinner. Today was meatloaf and rice pilaf. For lunch most soldiers subsist on potato chips and power bars, although sometimes they go to a new Iraqi restaurant that opened a couple of blocks away, Sun City Foods. The hamburgers there are legendary.

Behind the mess hall is a gravel-strewn yard with showers and latrines: plywood cabins with wooden seats over metal barrels. "We call them burn shitters," explains 1st Sgt. Jim Braet. When the morning comes I understand what he means. A half-dozen barrels stand in the middle of the yard, their contents aflame, and tall clouds of black smoke billow above the compound.