You know a movie's heading nowhere fast when even its monkey doesn't make you laugh. 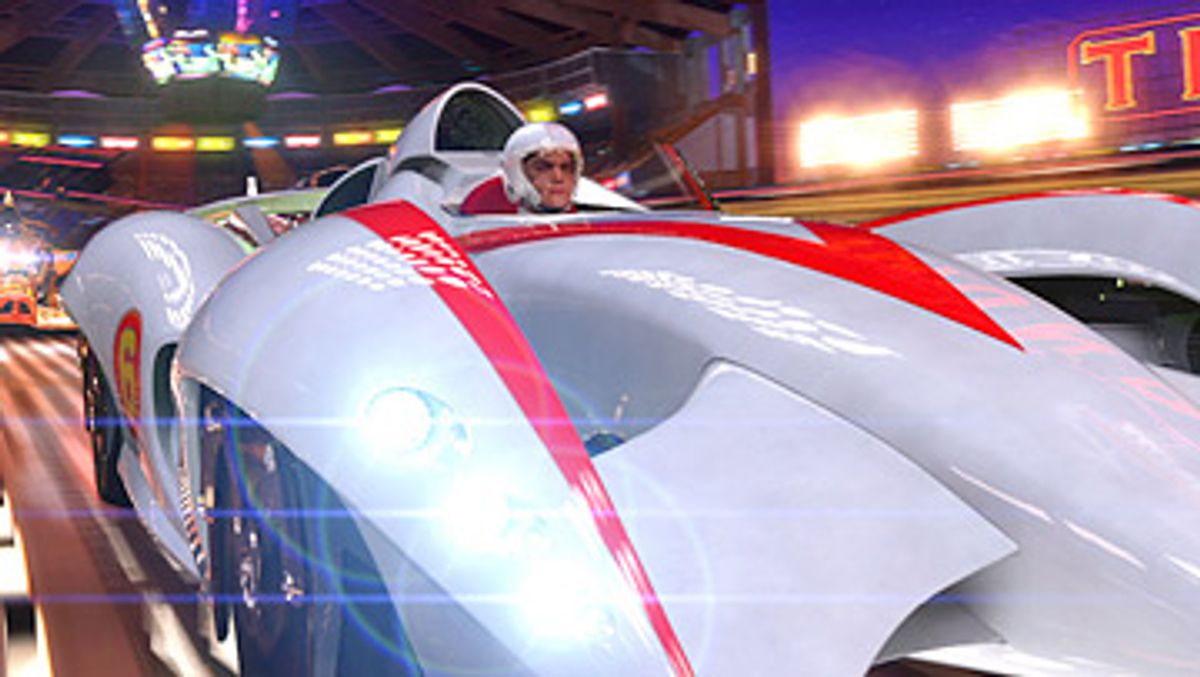 Every once in a while I'm hit with a movie whose existence I find impossible to comprehend. Who is this movie for? Did anyone involved take the time to have an actual thought -- even just one -- before investing time, care and money into this thing? Andy and Larry Wachowski's "Speed Racer" is so bereft of intelligence, style and excitement that I can't figure out who in the world it's supposed to appeal to: baby boomers nostalgic for the old Japanamation cartoon on which it's based? Parents who want to cultivate ADD in their kids? The picture is bankrupt in terms of everything but color, and even then, its palette suggests not careful selection but no selection: There isn't a single neon-jellybean or retro-flower-power color that isn't represented in "Speed Racer" -- if a color is bright, it's in there. That's not visual boldness; it's cowardice -- and that's only the beginning of the picture's problems.

The plot of "Speed Racer" -- its alleged script was written by the Wachowskis, who also produced the movie -- is exceedingly simple, so simple that it apparently has been piled high with extraneous details to make it more, you know, Matrixy. Speed Racer (the expressionless Emile Hirsch, looking even more 2-D than usual) is a fearless driver on the track, partly because there's racing in his blood: His dad, Pops Racer (John Goodman), builds race cars; his older brother, Rex Racer, a supremely gifted driver, has coached Speed from an early age.

But Rex disappears one day; he later dies in a big race. Speed's ambitions are fueled by his brother's legacy, and for a brief time, at least, he seriously considers a lucrative sponsorship offer from greedy captain of industry Royalton (Roger Allam), the head of a big race-car manufacturer. When Speed ultimately rejects the offer, Royalton vows to destroy the Racer family business. The rest of the movie is filled with tedious video-game-style racing and Speed's ever-so-gradual discovery that there are crooks out there who are fixing races; stopping them requires him to join forces with his former rival, Racer X (Matthew Fox), a slim, masked exclamation mark of a guy in a leather suit.

At one point Racer X (in that aforementioned leather suit) turns to Speed (who's wearing a pastel polo shirt with a scarf tied jauntily around his neck) and says stiffly, "I thought we made a good team today," to which Speed replies with boyish eagerness, "It felt like we'd been doing it for a very long time." That kind of dialogue is representative of the Wachowskis' smirky knowingness, their "Let's throw in a few campy, homoerotic jokes for the hip grown-ups!" approach to screenwriting. The filmmaking in "Speed Racer" lives down to the feebleness of the writing: The racing sequences are garish and sloppy, but in a deceptively sleek way -- they're so heavily computer-generated that they bear no resemblance to reality whatsoever. Even the original "Speed Racer" cartoon had some visceral immediacy, as well as a sense of glamour and fun. The Wachowskis do borrow some of the series' stylistic touches, including a wipe effect in which events unfold behind a character as his or her image glides across the screen. The effect is clever the first time it's used, tedious the following 999.

The Wachowskis made dazzling sci-fi entertainment with "The Matrix," even if the subsequent pictures in the trilogy made the first movie's vibrance seem like a fluke. But especially after suffering through "Speed Racer," I can no longer wrap my brain around the idea that the Wachowskis are the same guys who made the smart, sexy noir thriller "Bound." Some of the supporting actors desperately try to add the human touch here, among them Susan Sarandon and Christina Ricci, both of whom appear more alive than anything else in the movie. (For the most part the actors' skin looks unreal, like latex.) Paulie Litt, as Speed's pudgy little brother, Sprittle, is so annoying I kept wishing he'd go play in traffic. Not even his mascot, Chim Chim (played by two chimps, Willy and Kenzie), is funny, and you're in trouble when your movie doesn't even get laughs with a monkey.

"Speed Racer" is so arrogant about its so-called stylishness and energy that it feels like punishment, the equivalent of being trapped at a dinner party between two guys who feel compelled to inform you, in long-winded detail, how great they are. This isn't a picture filled with wonder and a sense of fun; it's so jaded and crass that I almost wonder if it's a highly unscientific experiment designed to gauge how little audiences will settle for these days. Manic and multicolored, "Speed Racer" is an excess of nothingness.