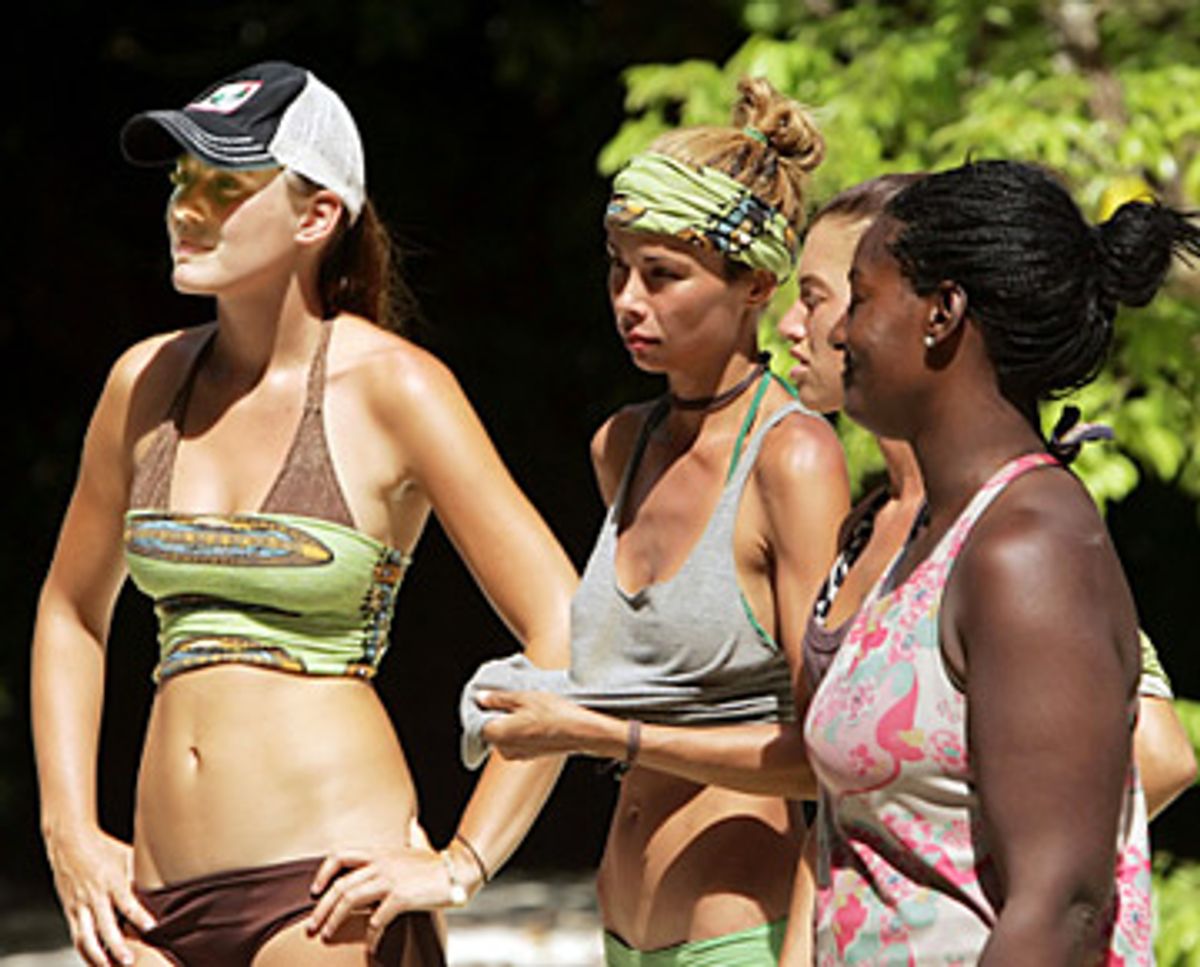 On most seasons of "Survivor," there are surprises. Players are seriously injured. Feelings are hurt. Major alliances crumble. Rainy nights incite depression and anguish. Former smokers go into withdrawal and lash out. Former happy-go-lucky optimists cry snottily into their hands and want to quit. And almost every female player, at one point or another, lays down on the ground next to another female player and has a long, detailed discussion about fudge brownies.

For diehard "Survivor" fans, fans who haven't missed a single season since Richard Hatch so memorably trotted around on the beach naked, double-crossed everyone and still took home the million-dollar prize, these "surprises" are part of the "Survivor" formula, as predictable as the part on "Law & Order" where the gas station attendant suddenly recalls the details of a customer who came in the night before, acting "kinda strange" and like he'd just "been spooked by something." Nervous breakdowns, injuries, trickery, secret friends, secret enemies, lovers, manipulated wannabe lovers, betrayed former friends -- we've seen it all.

So when I state without reservation that "Survivor: Micronesia -- Fans vs. Favorites" is the best season of "Survivor" ever, hands down, I do so with 16 seasons of the show under my belt, most of which were well worth the time. Whether the players were working out complicated psychosocial dynamics from their childhoods or unknowingly reenacting major portions of Werner Herzog's classic film "Aguirre: The Wrath of God," "Survivor" has always been dependably entertaining, intelligently edited and addictive beyond reason.

Even so, this season blew every other season of the show out of the water completely. "Survivor: Micronesia" was so unpredictable, so brutal, so funny and so bizarre that by Sunday night's finale, you had to assume that whatever you might predict would happen, the exact opposite was sure to occur.

And that's exactly how it played out: After the Favorites and the Fans battled it out for weeks, devious manipulator Parvati, who giggled and smiled widely as she mercilessly dismissed a long string of players (including her former friend and ally Ozzy) beat out honest, nice-girl Amanda, who took pains not to piss anyone off. This was the least likely ending imaginable: Amanda was sweet, she was blameless, and her boyfriend (Ozzy) was on the jury. At the last tribal council, Ozzy basically told Parvati that he'd never speak to her again, then he told Amanda that he was in love with her. The writing was on the wall -- or on the folded-up piece of paper, at any rate.

Not so fast there, my friend. As it turns out, Amanda's sad-dog eyes and bland earnestness lost her the million-dollar prize, just as it did on "Survivor: China" when she was up against the two most devious manipulators of the game, Todd and Courtney.

But it's fitting, really, that schemer Parvati should win it all, given the fact that this is the best season ever and legendary deviant Richard Hatch won the first season of "Survivor" with the same flavor of heartless, self-satisfied flair. While Hatch scoffed at the other contestants like they were pathetic children, it was obvious that his insecurities were what drove him. Parvati, on the other hand, pursed her lips and rolled her eyes like a mean popular girl straight out of a John Hughes film from the minute she set foot on the beach. She quickly aligned with James and Ozzy, two of the most physically dominant and physically attractive Favorites. She cuddled up to James, buttered up Ozzy and palled around with Amanda. Parvati had found her "in" crowd.

Maybe the others found it flattering, even as they distrusted their self-serving, flirtatious friend. And even though ever-lovable, charming, quick-witted nurse Cirie helped to mastermind most of the moves Parvati took credit for, Parvati not only managed to intimidate those who weren't on her side but charmed those who were. And to her credit, her rah-rah, you-go-girl, screw-the-guys spirit led to an all-female final four for the first time in "Survivor" history. Sure, there were a few fights followed by tears, but mostly the women seemed to have one another's backs (except for maybe Alexis and Amanda, who distrusted and disliked each other all along because they both seemed to like Ozzy).

Meanwhile, the men on this season of the show were pretty doomed. Two of them -- Jonathan and James -- had to be evacuated because their injuries became severely infected. Ozzy's strength at every challenge made him a marked man from the start, and Jason and Erik were -- how do I put this delicately? -- perhaps the most gullible players ever. First Jason was sure he'd found the immunity idol when Ozzy carved a face onto a stick and left it for him where the idol once was, then the group convinced Jason not to play the real idol once he found it (and promptly voted him out when he obliged). Finally, Erik gave his immunity necklace to Natalie, only to get voted out by the others (including Natalie).

This season, there was a lot of acting at tribal council, followed by a lot of evil giggling. Yes, this was a female-dominated "Survivor" all right, and for those of us who've dreamt of such a thing for years, it was tough not to get caught up in the spirit of it all, even as we were tired of Parvati's chipper arrogance. By the time Ozzy proclaimed his love for Amanda in front of everyone, and dreamy James pouted to show Parvati just how betrayed he felt, and, with a wink and a sly smile, Parvati convinced everyone that she deserved to win, and then James won a separate $100K fan-favorite prize and Ozzy and Amanda admitted that they were still smitten with each other? It was just like watching "The Breakfast Club" all over again, except with more cash prizes.

Because for all the surprises in the history of "Survivor," this season was truly, unbelievably surprising -- and unforgettable. (Cue "Don't You [Forget About Me]" by Simple Minds; fade to black.)