Hip-hop is no longer cooler than me

It's a sad day when a farm boy from Iowa can say that about a musical genre he once loved. When will the awful dance crazes end? 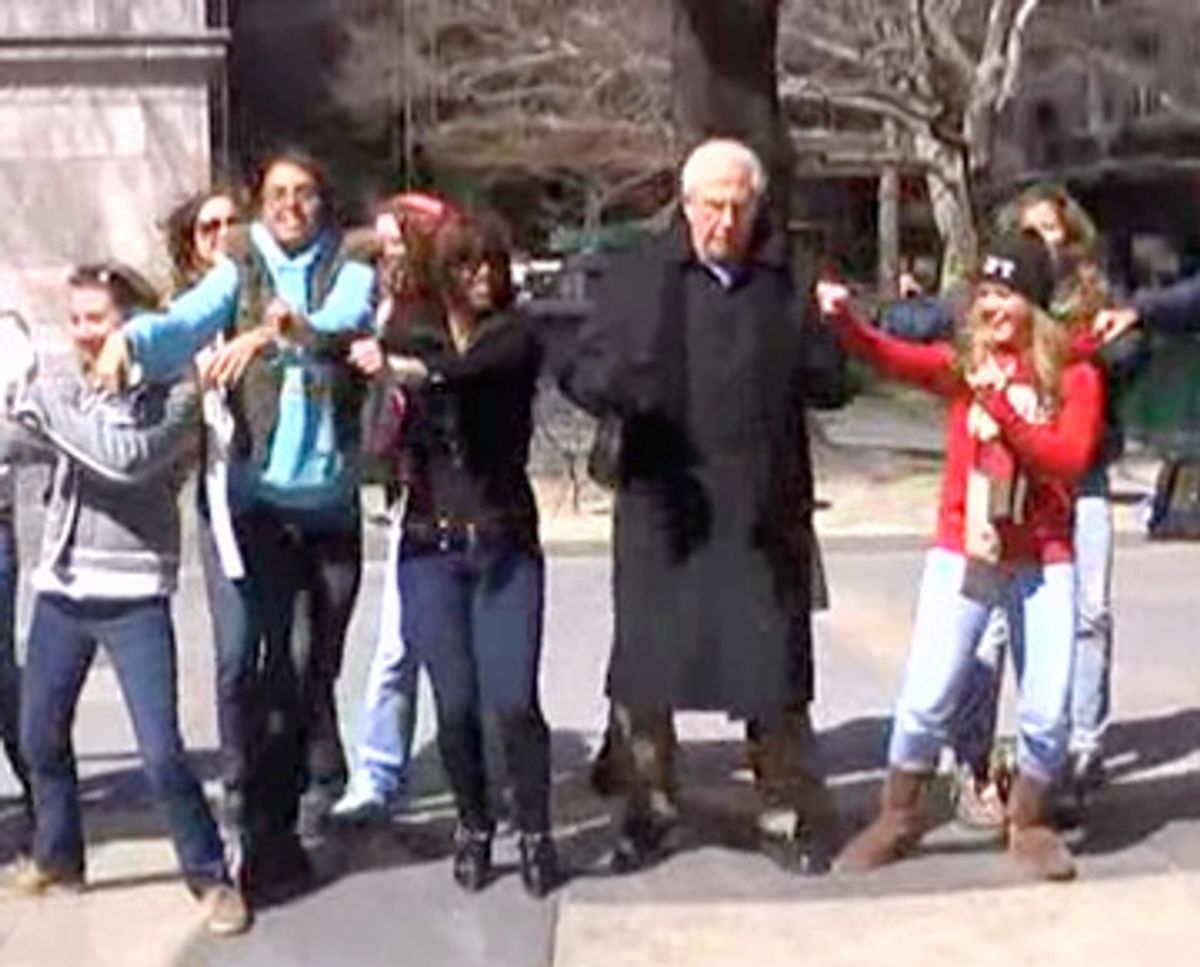 I must have been 8 when I heard N.W.A.'s "Fuck tha Police." That seems about right, because us Iowa farm kids heard everything of cultural significance a year or two after it was important, and I remember being in third grade (this was 1989) when my life changed for the better. I was on the bus, with an older fat kid everyone called Speed sitting the row in front of me. Speed and I had a special bond: We were perhaps the only kids in central Iowa to love rap. "Listen to this," he said, discreetly sliding me his cassette player and mix tape. It wasn't just the swear words, though at first that was a big part of N.W.A.'s appeal. It was Ice Cube's anger, and Eazy-E's bemused inventiveness, and Dr. Dre's beats. As I grew up, N.W.A. led me to Snoop Dogg's "Doggystyle," which led to the oeuvre of Biggie, and the life and times of one Shawn Carter. But what I loved about hip-hop -- what I still love about it -- is its brashness. The uncouth bravura of Wildean M.C.s is intoxicating.

This brings us, inevitably, to the problem with hip-hop today. A genre whirled out of the grist of urban pain and worn as a low-slung hat and baggy jeans has somehow slipped on clown shoes and taken up night classes in pantomime. Its dances are silly, its beats infantile, its rhymes lazy. I am sorry to report this, but hip-hop is no longer cooler than me. I've known it to be true for some time but dared not acknowledged it -- until I saw Bo Ryan do the "Soulja Boy." Bo Ryan is the men's basketball coach at the University of Wisconsin. He is old, he's white, and he should have nothing to do with pop-cultural relevance. And yet there he is, online, dancing the Soulja Boy, an ongoing craze among young aficionados based on the song "(Crank Dat) Soulja Boy" by an artist of the same name. Soulja Boy's Internet sales of his 2007 self-titled album have exceeded 3.3 million copies, the most ever on the Web.

The problem isn't that Ryan fails inexorably in his attempt at the Soulja Boy. It's that he nails it. The slight bend of the knees and cross step, the rednecky hop and flip of the wrist, the goofy Superman in flight -- it's all, alas, straight-up Soulja Boy. In fact, if you compare Ryan's rendition with the original, you, too, might find yourself preferring the subtlety of Ryan's moves. (His cross steps aren't as aggrandized, for one.) Are these not trying days when a 60-year-old Wisconsinite improves "the game," when even Democratic presidential candidate Mike Gravel tries his hand at the Soulja Boy?

We are witnessing nothing less than the Macarena-zation of a genre. Because of Soulja Boy's success, industry execs now demand that new artists have dances at the ready to accompany their albums. The dances help drive up sales, that fast-disappearing commodity. And so the airwaves and Interwebs are still filthy with song-and-dance numbers, like Pop It Off Boyz' "Crank Dat Batman" and last year's "Chicken Noodle Soup" song, which accomplishes the impossible by being dumber than it sounds but remains great fun for 50-year-olds in middle management.

Or at least that's one popular theory. But I think this theory is ludicrous. Hip-hop has sought commercial viability since the mid-'90s. Jay-Z has built an entire career out of finding listeners like me, and you'd be hard-pressed to say his music suffers because of his pandering. I think, instead, today's young M.C.s are given too much credit, as if they're choosing to dumb it down. The problem with the dances of hip-hop -- and with the genre as a whole -- is that these artists are in fact choosing to do what they're capable of. This is their best, people. And I say that because the only thing more insipid than the dances are the songs themselves.

It's an amorphous thing, to chronicle hip-hop's decline, but I trace its genesis to the sound every fan loved: Atlanta at the turn of the century, repelling what New York and Los Angeles did, finding its own way with krunked-out beats and slurred lyrics. Atlanta (Outkast and Ludacris mostly) begat the Cash Money Millionaires of New Orleans (think Juvenile and "Back That Ass Up." The music then evolved, except that T.I. and his ilk in Atlanta and Lil Wayne and his in N'Awlins were neither as clever with the rhymes as Ludacris nor as adept in the production as Outkast. A sound that was already simpler than what Dre out west or Puffy out east would have allowed became lazy, less crisp, and the lyrics were all that much harder to decipher, hiding behind drawls and weighed down by bling. Then the music shifted again in, roughly, 2006. Things got so dire that Nas, one of the great New York rappers, released an album called "Hip-Hop Is Dead." The new sound's beats were as simple as the rhymes were unnecessary. And into this void, exemplifying it, stepped Soulja Boy. His hit is a three-note wonder seemingly played on a xylophone. Now, Dr. Dre used to spend up to 100 hours perfecting a beat. Soulja Boy? He sees what's hot at the nearest elementary school and calls it his own.

In his defense, Soulja Boy operates in the "snap music" subgenre of hip-hop, which will never be accused of musical complexity. Snap music is big because radio stations tired of the sluggish tempos coming out of Houston last year. (A shame. I love the Houston stuff.) The difference here is that the Houston guys -- Slim Thug, Paul Wall, Mike Jones et al. -- could rap; the near stasis of the backdrop only brightened the glare of the M.C.'s spotlight. Here's Paul Wall, from his 2005 hit, "Grillz," an ode to the diamond or gold mouthpieces rappers love(d) to wear: "I got da wrist wear and neck wear dats captivatin'/ but it's my smile dat's got these onlookers spectatin'/ My mouth piece simply certified a total package/ Open up my mouth and you see mo carrots than a salad/ My teeth are mind blowin, givin everybody chillz/ Call me George Foreman cuz I'm selling everybody grillz."

Now that's funny. It just is. And it's an example of hip-hop going light but not going easy on the lyrics. That took Paul Wall some time to think up. By contrast, here is "(Crank Dat) Soulja Boy": "I'm bouncin' on my toe/ watch me take to Areab/ And he gonna take it up for sho/ Haterz want to be me/ Soulja Boy, I'm the man/ They be looking at my neck/ Sayin' is them rubber bands man?" No. 1: He's not trying to be funny. It just sounds that way. No. 2, and this is kind of obvious: He's not really trying at all. I mean, listen to the song and it actually sounds like he's a first-time freestyler, the rhythm is so off. It's as if even he can't wait to get back to the chorus. And the chorus! My God, the chorus. "Superman dat ho" is a sexual euphemism that's not really all that illicit, as most sexual euphemisms go. It's just ... infantile.

The most depressing part is that Soulja Boy is not alone in lacking creativity. Webbie, Lil' Phat and Lil Boosie sometimes don't know what else to say, so they literally start spelling words. Lil Wayne, under the influence of a talk box, has made a hit out of saying "lollypop" over and over. And Fat Joe's latest, "I Won't Tell," succeeds only because J. Holiday has a good voice -- which is still better than Fat Joe's 2004 hit "Lean Back," a dance song for people who don't dance, who just, you guessed it, lean back. These three tracks -- Webbie's, Lil Wayne's and Fat Joe's -- currently reside on Billboard's Top 50 hip-hop list, and Lil Wayne's song is No. 1.

Look, I'm not confused or annoyed by hip-hop, like older rock fans are by, say, Fall Out Boy. More than anything I'm embarrassed. Since when did young black men, heretofore the arbiters of pop culture, become so lame? And since when did the citizens of that culture not know the difference? One Saturday not long ago, my wife called me into the living room. MTV had on some dance competition show, and an earnest group from Philly did the Soulja Boy. My wife and I watched, stunned, as the crowd and apparently all of America cheered on the group's shuffles. Iterations were involved, but it was a largely faithful piece. The kids in the crowd had to be quieted. I wish I could have been there, a cassette player and a 20-year-old mix tape in my clenched fist. I would have handed it over to any kid who looked like he needed it, much as Speed once passed it to me. And I would have said, simply, "Here. Let this guide you."

Paul Kix is a senior editor at Boston magazine. His writing has also appeared in the Chicago Tribune and ESPN the Magazine.