Never mind the sex-tape rumors. "The Hills" ends another soapy season with a nod toward love. 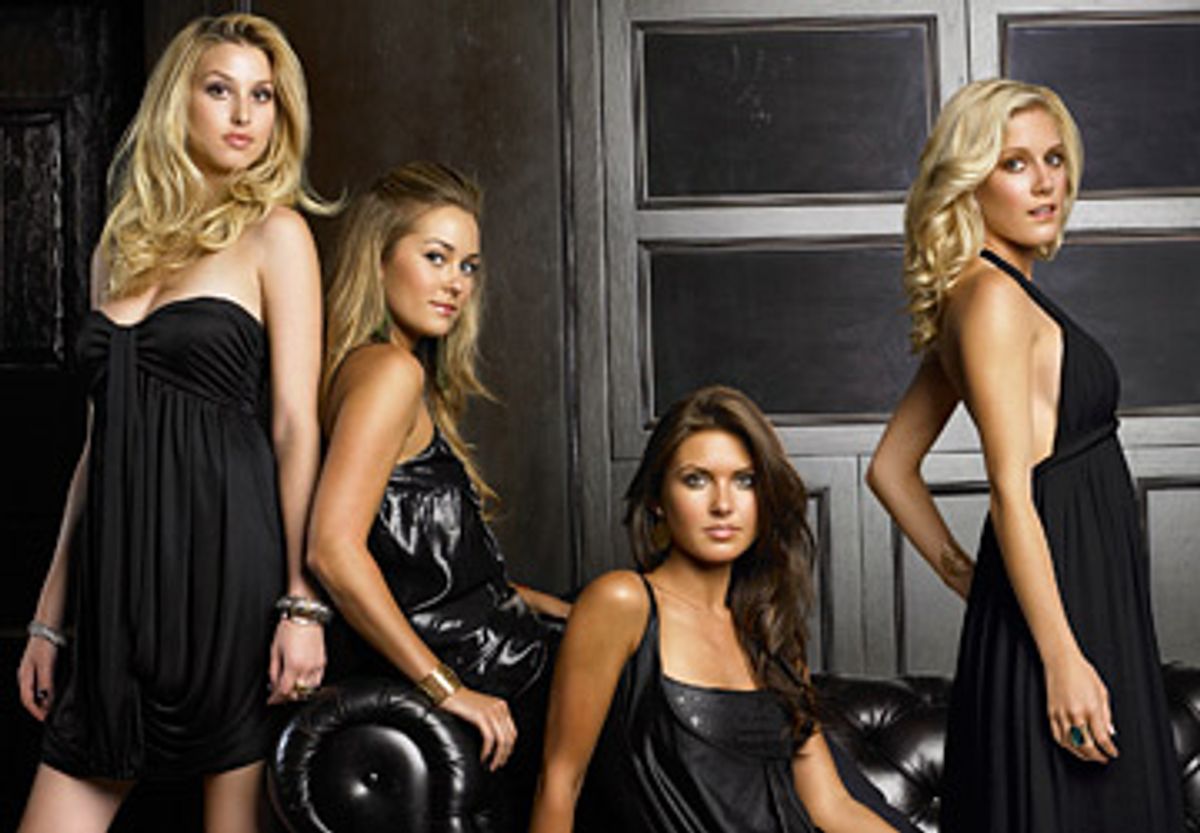 I don't have many vices, but watching "The Hills" is one of them. And until a few months ago, I never felt guilty about it.

Previous seasons were so packed with luminously lit soap-operatic drama and (inadvertently) hilarious dialogue that each half-hour episode flew by, a pleasurable bonbon with fewer calories than a rice cake. The show pivots around Lauren -- the ultimate reality-TV It girl, so transparent you can barely see her at all. An apple-cheeked Teen Vogue intern, Lauren has for three seasons bravely brooked betrayal by boys she crushed on and by ex-best friend Heidi and her sinister boyfriend, Spencer, who (in case you've been squatting in a cave) supposedly spread word of a sex tape of Lauren to the media . Lauren's true girlfriends rallied round her -- in an endless series of beautifully filmed West Hollywood cafes, boutiques and clubs -- and bucked up her confidence. Not that it ever flagged for too long, because there was always her dalliance with boys like Brody Jenner (who starred in his own short-lived reality show, "The Princes of Malibu," with his ex-best friend Spencer) to keep her aflutter. And for comic relief, there was Lauren's sidekick, the strangely blank Audrina, and her unlikely love interest, a motorcycle-riding lunk considered trash by Lauren's friends, who nicknamed him Justin Bobby.

Somehow it all went sour this year. Perhaps it was the gluttonous decision to extend the season, but when the show returned for extra episodes in 2008, "The Hills" had lost its luster. The semi-unreality of the series had always been one of its main selling points; after all, isn't TV more exciting than real life? But it wasn't until recently that I started obsessing over the show's fakeness. Where once I just allowed myself to steep in the "Hills"-ness of it all -- the pleasant sensation of wafting through the California sunshine with wispy young things, the shock of recognition at the tiny emotional tensions and treacheries that eat away at female friendships -- now I find myself wondering how they did every scene.

When Lauren sits in a packed classroom gossiping with Spencer's sister, I wonder whether they were given an outline of topics and how much they had to pay the fashion school to let the show film there. (Is it a real class? Are the girls even enrolled there?) When Lauren and her viperish friend Lo decide to rent a house together and to leave Audrina out of their activities, I wonder whether the plotline was dictated to the girls ahead of time -- and if so, did Audrina know? Did she agree to be made into the lonely girl, triangulated until she had no one left but the newly returned Justin Bobby, who is now her white knight sagely counseling her to break away from Lauren and Lo and their "bad vibes"? When Lauren confronts her about their waning friendship, the slightly pained twitch on Audrina's face in the finale -- as close as she gets to high emotion -- suggests she probably wasn't in on the script meetings.

Then again, Heidi and Spencer have forged a joint career out of looking slightly pained on-screen on "The Hills" (and then, once off-screen, grinning like maniacs for any tabloid photographer within 150 feet). This season Heidi kicked Spencer out of their apartment, part of her supposed attempt to win back Lauren's friendship. This should have been hugely rewarding, but it turned out to be a tedious development resulting in repetitive discussions about "moving on" and a lot of scenes with Spencer bumming around his sister's apartment looking bored and rueful. For the finale, Heidi decided to move on literally -- by taking a business trip to Vegas with her nightclub maven/hotel developer boss -- and Spencer chose to follow her. In one of the stagiest, most perfunctory scenes ever to appear on "The Hills," he shows up at a nightclub where she is schmoozing with her colleagues and demands to see her. "You gotta get that under control," Heidi's boss snaps at her. The (artificial) choice here is clear: It's Spencer or her career. Her pick is revealed in the next scene, when she misses her morning appointment with the boss and instead appears on Spencer's arm. Just as in previous seasons she chose boyfriend over best friend, Heidi has put her dickhead partner-in-crime above all else. She knows better than anyone that Spencer is her career.

MTV likes to surround "The Hills" in a halo of hype and celebration. It threw a huge party for the fake ending of the third season -- which meant it had to go even bigger for the real finale Monday night. So it crammed a Hollywood chateau full of festive activity (Usher sings! Whitney walks in 5-inch heels without toppling! Fans bring gifts for Lauren and Lo's new puppy!), with members of "the cast" breathlessly rehashing their conflicts -- but not too much because, as Audrina points out, they can't give away too many details of Season 4. And so go the days of their so-called lives.