As voters head to the polls, the Clinton and Obama campaigns roll out their spin for the night ahead. 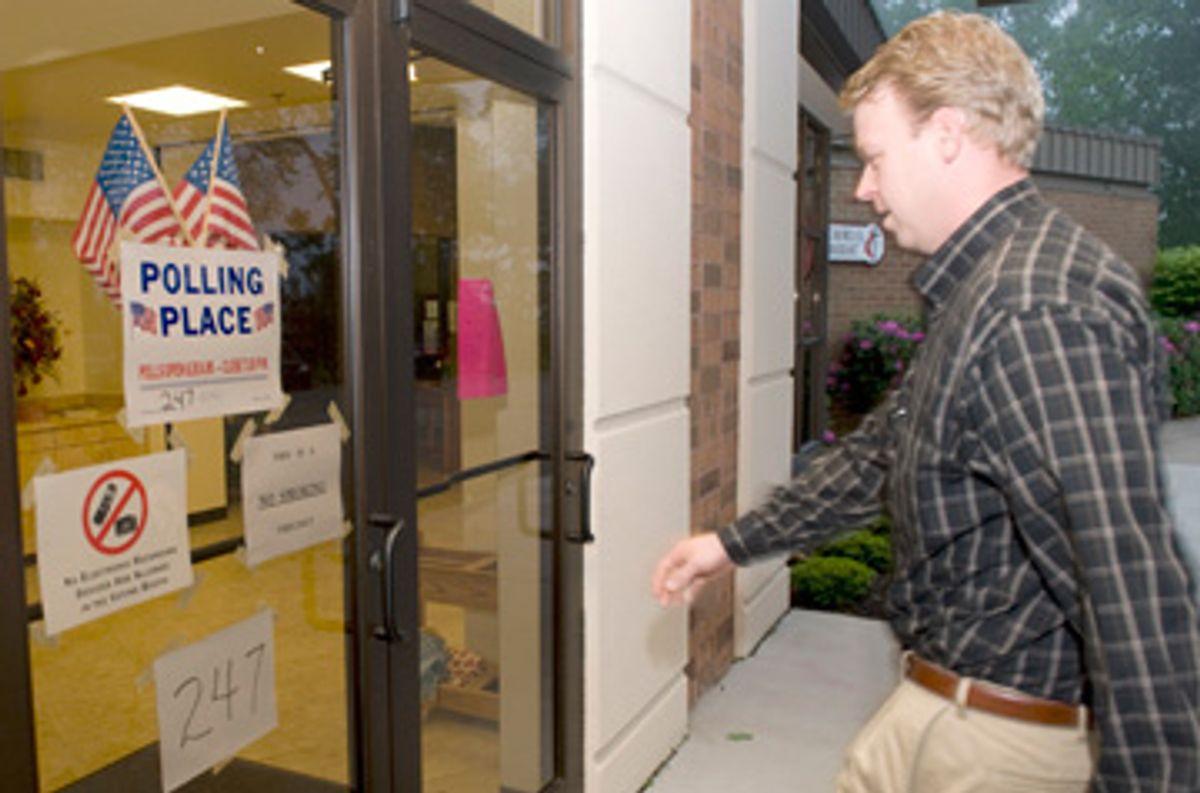 West Virginians are heading to the polls today and voting in, among other things, their state's Democratic presidential primary. Hillary Clinton is widely expected to win in a walk -- Barack Obama himself conceded as much, and polls taken this month have shown her with a lead of between 29 and 40 percent. (Polling places are scheduled to close at 7:30 p.m. EDT; we'll be covering the results here in War Room.)

But the Clinton campaign is having trouble finding people who will take her anticipated victory seriously. Obama's campaign is already focusing on the general election, and with more superdelegate pickups every day he's coming ever closer to making his lock on the nomination, which already seems assured, a numerical reality.

So on Tuesday afternoon, the Clinton camp put out a memo titled "Why West Virginia Matters"; it's a rehash of many of the campaign's arguments, and a preview of the message we'll presumably be hearing from Clinton surrogates and maybe even the candidate herself after the results start coming in. It's worth noting, though, as ABC News' Jake Tapper did in a post on his blog, that Obama's superdelegate pickups over the past week will almost certainly negate the pledged delegates Clinton nets from West Virginia.

The Obama campaign has also put out its own memo, in which it preemptively dismisses Clinton's victory and makes its case for Obama as a strong candidate heading into the general election. Both memos appear below. (Unfortunately, I've had to cut off the second half of the Obama camp's memo, in which it lists "five myths about Obama's support." Given the way the campaign structured the polling data it cites in that section, it would be a difficult, time-consuming task to code that half so it would be legible here, as you can see from this attempt Time magazine's Mark Halperin made to post the whole thing.)

With a record turnout expected in today's primary, West Virginia Democrats will make clear who they believe is the strongest candidate to take on Sen. McCain in the Fall.

The Mountain State is used to picking winners. Every nominee has carried the state's primary since 1976, and no Democrat has won the White House without winning West Virginia since 1916.

Democrats carried West Virginia in 1992 and 1996, but lost the state -- and the White House -- in 2000 and 2004. Hillary has predicted victory against Sen. McCain in West Virginia based on the strength of her economic message.

Given the attempts by our opponent and some in the media to declare this race over, any significant increase in voter turnout, coupled with a decisive Clinton victory, would send a strong message that Democrats remain excited and energized by Hillary's candidacy.

In the face of grim poll numbers, the Obama campaign has attempted to dismiss today's outcome despite the fact that Sen. Obama has outspent us on advertising, has more staff in the state, and more than double the number of offices.

He has also benefited from the support of the most high-profile endorsers in West Virginia -- Sen. Jay Rockefeller and Congressman Nick Rahall. By every measure, the Obama campaign has waged an aggressive campaign in the Mountain State.

Despite being the so-called "presumptive nominee" and benefiting from these advantages, Sen. Obama has been unable to close a significant gap in the polls.

Sen. Clinton has already won Ohio, Pennsylvania, Florida and Michigan. With a win in West Virginia, Sen. Clinton will have once again proven her greater ability to win in the key swing states.

West Virginia
There is no question that Senator Clinton is going to win by huge margins in the upcoming primaries in West Virginia today and Kentucky next weeks. She has poured resources into both states and she, former President Clinton, and Chelsea Clinton have all campaigned extraordinarily hard there.

The Clinton campaign has already been touting their margins in these states -- In fact, Bill Clinton said that Hillary can win West Virginia with 80 percent—and the West Virginia Senate Majority Leader said Clinton needs to win by "80-20 or 90-10." And in keeping large margins in perspective, it is worth noting that, while Senator Clinton will win big in West Virginia, Barack Obama won neighboring Virginia by 29 points.

But with 49 contests behind us and only six to go -- including several states where we expect to do well -- Barack Obama leads in pledged delegates, contests won, and superdelegates. And for perspective, while 28 pledged delegates are up for grabs this evening, Obama has won the support of 27 superdelegates in the course of just the last week putting him less than 150 total delegates away from clinching the Democratic nomination.

Obama's Strong Position in the Race Ahead
Nationally, Obama is running stronger among Independent voters than any winning Presidential candidate since 1988 and is significantly outperforming Sen. Clinton among these voters as well in general election polling.

To understand a potential general election match-up between Obama and McCain, the only analysis and data that should be considered valid are the current head-to-head National polls rather than extrapolating irrelevant assumptions from exit poll data in Democratic primaries.

And, on the issue of Democratic unity in the Fall, analysts need only consider that in April of 1992, on a night when Bill Clinton won four primaries and was the presumptive nominee, 6 in 10 Democratic primary voters said they wanted another candidate in the race. Despite this, five months later, Democratic voters were unified behind Clinton and he won his first of two terms in office.