Want to watch tough female rappers shake their booties in a lesbian bar? VH1's "Miss Rap Supreme" proves no one is immune to reality TV's degradations. 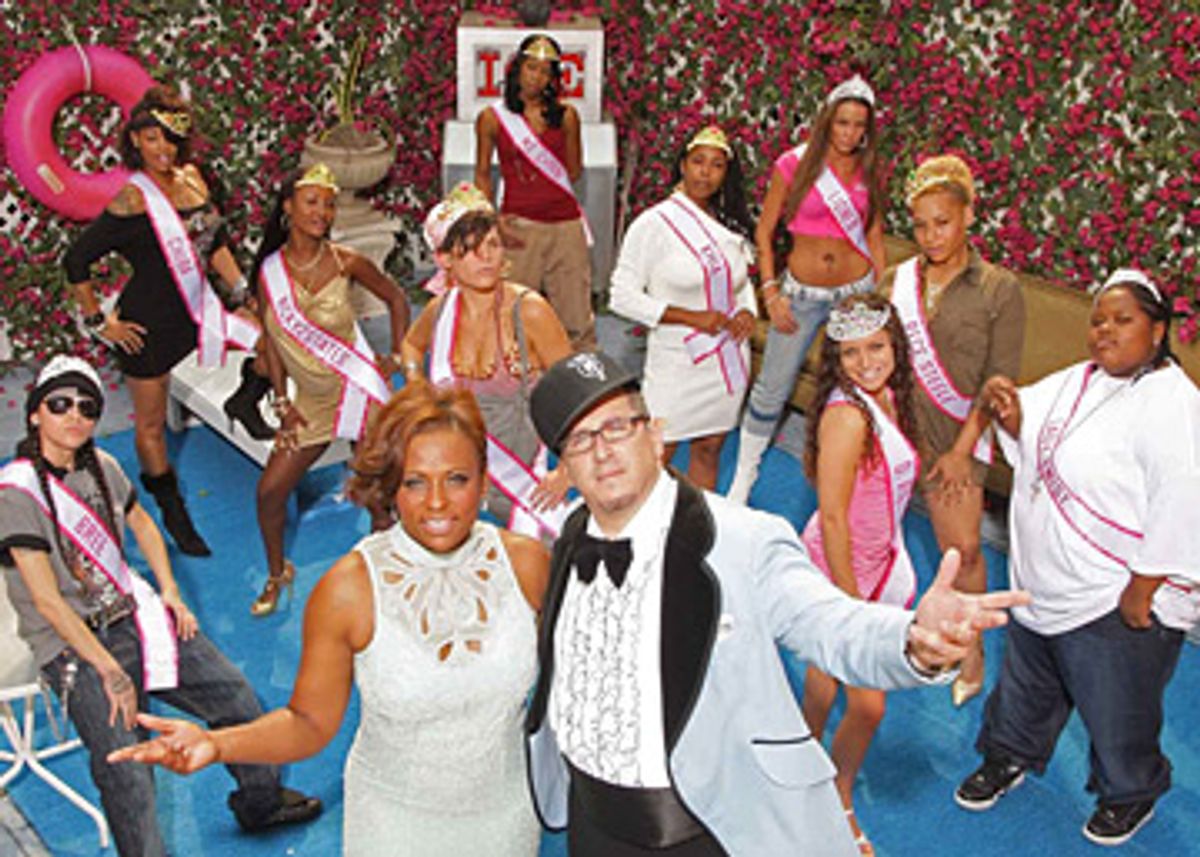 About four years ago, a sardonic group of hip-hop writers of color who had put out a zine called Ego Trip in the late '90s, reinvented themselves as reality-TV producers. Their first project was VH1's "The White Rapper Show," a battle royal for 100 G's in which 12 Caucasians cohabitated in a low-class crib in the South Bronx and tried to prove their skills at free-styling, writing 16-bar verses and living a thug lifestyle to the fullest for a variety of unresponsive, usually black audiences. The Ego Trip crew made "The White Rapper Show" a deliberately low-budget affair, and sent up the glam pretensions of reality TV by making the show look chintzy. Instead of the fashionable digs of "The Real World" or "America's Next Top Model," the crib was a barely converted warehouse dubbed the "White House" and furnished with bunk beds. "Big Brother" contestants get cryptic messages in alphabet blocks, but the Caucasian M.C.s got video messages from the show's host -- white rap impresario and former 3rd Bass frontman MC Serch -- through a TV screen embedded in a giant mayonnaise jar.

Part of what gave the show its edge was the chip that Ego Trip have always carried proudly on their shoulders. The creators seemed, in designing the show, to have stacked the deck to prove that white people can't rap and they look stupid trying. The minuscule odds of an explosion of Eminems aside, the idea that "culturally black" skills are confined to literally dark-skinned people is as ridiculous as the converse notion, that people with dark skin can't think abstractly, play tennis or keep a hacky sack in the air. By making fun of white people, Ego Trip flipped the script for a hearty laugh, but the script really needs to be recycled.

The group's latest effort, "Miss Rap Supreme" (10 p.m. EDT Mondays on VH1) does to female rappers what "The White Rapper Show" did to Euro-Americans. The competition remains the same, as does the 100K reward, but this time the show takes place in Los Angeles, in a jazzed-up warehouse dubbed the "Fembassy Hotel." For satirists of color, Ego Trip have a pretty conservative bent when it comes to black culture, women and hip-hop. Though the show makes fun of the trappings of reality TV, it doesn't do anything to challenge anyone's bad impression of women in hip-hop -- the loudest, most combative, profanest and most unintelligent get the most airtime, and even the quieter ones want to seem rough. In case we thought Lionezz, a tall, Teutonic M.C., was the exception, she declares, "I'm from the 'hood! There's a 'hood in Germany!"

Ego Trip are equal-opportunity offenders, the reality TV equivalent of Sarah Silverman, for whom no sacred cow or vulnerable demographic can escape an outrageous joke. The Fembassy, like the White House, is a tacky parody of the state-of-the-art homes created for "The Real World" or "America's Next Top Model," with each of its rooms dedicated to a different female rapper. The show's challenges are designed for maximum shame: They require the women to spit rhymes for white sorority girls (who are relieved that they don't get robbed). Contestants are shuttled to a convent, where they are instructed to create community with some "real sisters." MC Serch and co-host/lady rapper Yo-Yo ask them to write and perform a seductive rap song in a club; what the contestants don't know beforehand is that the club is a lesbian bar.

It's hard to forget that Ego Trip are a boys club; there are far too many pageants and challenges that emphasize seductiveness or femininity. "Y'all need to quit that," Lady Twist exclaims at another announcement that it's "Pageant Time!" To write their rhymes, the girls are herded into the "Make-up Room." During certain challenges, and the elimination round, they must wear sashes emblazoned with their rap names. (Serch hoists the loser's sash onto a flagpole at the end of each episode.) At one point, they were even asked to cross-dress as famous male rappers in order to channel "male swagger" -- a requirement for success in the hip-hop industry, according to the Ego Trippers.

But these are not poised debutantes, to say the least -- and that's why we're supposed to laugh at them. Before the first episode ends, a catfight explodes between Miss Cherry (who is rumored to be Kanye West producer T-Pain's baby mama) and recording artist Khia, whose 2002 hit "My Neck, My Back" demanded more than just cunnilingus. Cherry ends the confrontation by yelling "One-hit wonder!" at the haughty star, whose presence angered and confused all the other contestants who haven't recorded hit singles. Later, Khia gets kicked off the show for plagiarizing ... herself. An even stranger rift develops between Russo-American tomboy Byata and Chiba, a model who turned to rapping after her eye was disfigured in a car accident. During the first episode, they share a homoerotic kiss; by the fourth installment, they're accusing each other of being the devil without a shred of irony.

The longer you watch, though, the more you begin to notice something interesting going on. As a counterpoint to the show's chauvinistic foundations, the women frequently manage to restore some of their dignity by refusing to take the contest entirely seriously -- most of them, anyway. On "The White Rapper Show," Persia, a tough-talking girl from Rockaway Park, kept choking during her challenges, though early on she had provided that show's realest rap moment by winning an improvised rhyming battle on a South Bronx street. But after a while, it appeared that she could feel the show making her look bad, and that prevented her from fully committing. It makes you wonder -- shouldn't this show occasionally prove its presumptions wrong? Would "American Idol" have made it past Season 2 if it didn't deliver actual American idols?

The next Lauryn Hill aside, the women of "Miss Rap Supreme" have figured out how to rise above the degradation in different ways: First, they nail a few of the challenges. They put MC Too $hort, famous for dissing hos, in his place during the "He Said, She Said" challenge. The ladies who consistently do well, like Byata and Rece, are, if not in on the joke, willing to go there for the goof. In contrast, Chiba's inflexibility and dead seriousness about a show that clearly aspires to be second-rate hurt her as much as her irrational beef with Byata.

In moments like the rap drag-king show and the lesbian bar bump-and-grind, the cast's complete lack of homophobia flips the lack of a script on the producers and transforms the show into something like a prototype for a working-class version of "The L Word." While a couple of the women express surprise at having to shake their booties in a dyke bar, none of them balk at the prospect, and at least two, Bree and Lady Twist, who are openly lesbian, have most likely done so before. These aren't the gay-for-pay porno dykes you'd expect a team of male producers to encourage, either -- Lady Twist is a solid block of butch.

Outside the all-queer Logo Network, there's no other show that gives us even this much of a glimpse of working-class lesbians of any color, and even though both of the women who are out of the closet have now been eliminated from the show, the Sappho-friendly undertones of "Miss Rap Supreme" still represent a complete reversal from "The White Rapper Show," which had no sexual anything about it whatsoever -- homo, hetero or in between.

While the lesbian theme running through the first episodes of "Miss Rap" adds an unexpected level to the proceedings, it may do more to inflame the stereotype of female rappers, let alone lesbians, as coarse and unfeminine than it does to change any minds about the ability of women to rhyme with the swaggering boys. It turns out yet again that the price of craving representation is that no demographic can escape being reduced and degraded by the media. When the women of "Miss Rap Supreme" have to come up with a 16-bar rhyme about what it would be like if women ruled the world, Bree's last line declares, "If women ruled the world, there'd be a lot of lesbians." While that's certainly debatable, "Miss Rap Supreme" could rack up even more subversion points -- and maybe even find a female rapper worth the world's time -- if women ruled Ego Trip.