Edwards announces his support for Obama

In a decision Democrats had been waiting to hear for months, John Edwards endorses Barack Obama at an opportune time for the likely nominee's campaign. 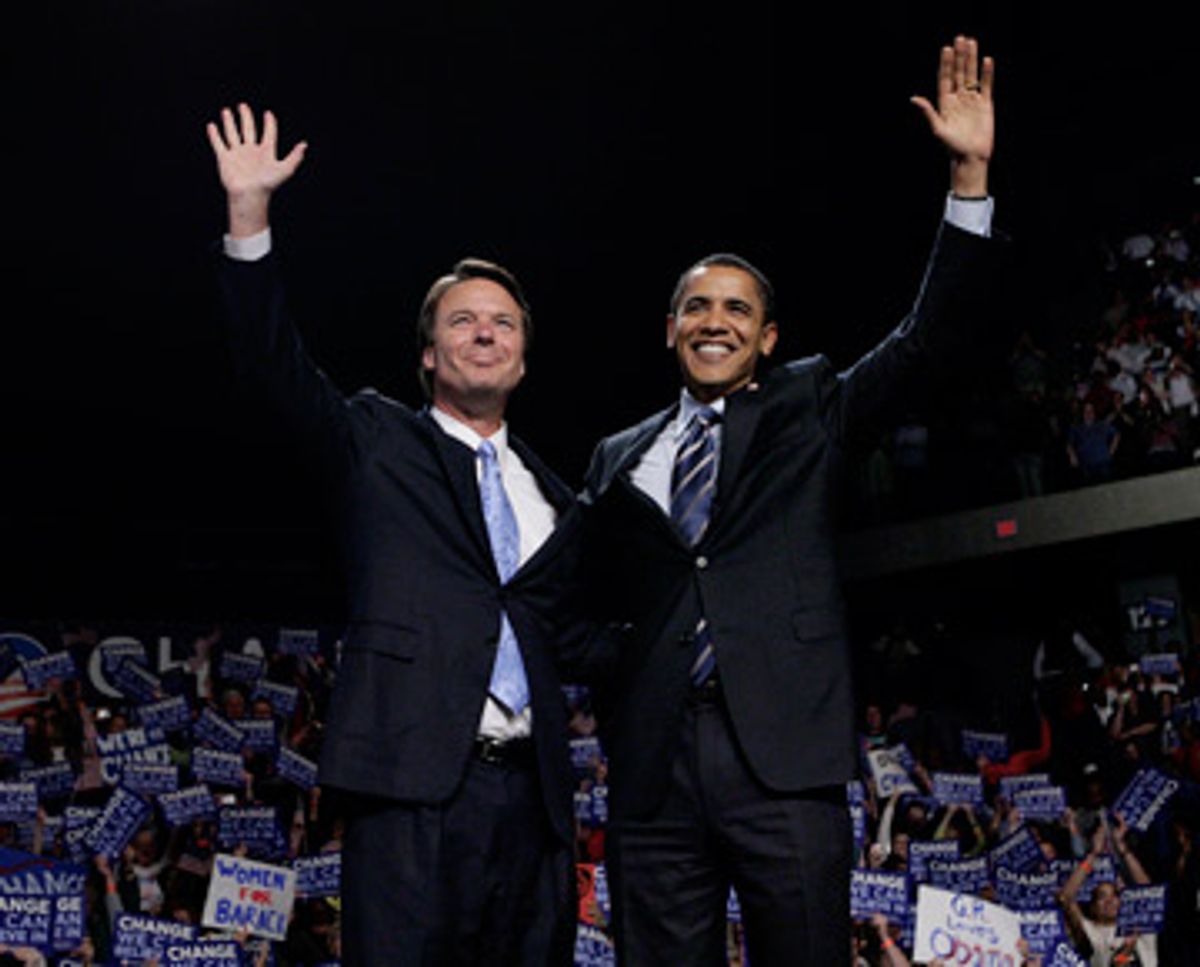 Sen. Barack Obama, right, is joined by former Sen. John Edwards at a rally in Grand Rapids, Mich., on Wednesday.

Speaking before a raucous crowd in Grand Rapids, Mich., on Wednesday, John Edwards finally delivered the endorsement Democrats had been waiting on for months and announced his support for Barack Obama. And the crowd -- which the Obama campaign estimated at 12,500 people, some of whom had begun to line up practically at the crack of dawn on Wednesday -- loved just about every minute of it.

Obama even got to make a joke out of the endorsement, and the dispute over Michigan's primary and its delegates, as he introduced Edwards. Referencing the fact that he, like the other Democratic candidates, did not campaign in Michigan before the primary there because the state broke party rules about the timing of the contest, Obama said, "I felt guilty about not campaigning. And so, as a consequence, I decided that I would try to give you something special. I decided that on my first full day of campaigning in Michigan, I wouldn't be fooling around, that I wasn't going to just do the same old thing, but I decided that I was going to bring out one of the greatest leaders we have in the Democratic Party." With that, Edwards took the stage, to the strains of Bruce Springsteen's "The Rising."

What the crowd didn't love, at least not at first, was one early section of Edwards' speech, in which he praised Hillary Clinton. "During the course of this presidential campaign, I've gotten to know the candidates ... very, very well ... We're down to two amazing candidates. And before I get too far, I want to take just a minute and say just a word about my friend and your friend Sen. Hillary Clinton," Edwards said. When he mentioned the name of Obama's rival, the crowd responded with a mix of cheers and boos, which Obama, seated on a stool next to Edwards, made a little attempt at waving off. From then on, the audience seemed willing to hear Edwards' praise for Clinton. Strangely, though, in some ways Edwards' words about Clinton as a candidate and person were actually more positive than anything he said about Obama.

That said, however, Edwards' praise for Clinton ultimately came in service of saying that she has no chance of winning the nomination, that Obama has it locked up. Edwards continued:

In the past few months and past few weeks, I've gotten to know Senator Clinton very well ... What I've learned during that time, and I've gotten to know her very well, is that she believes with every fiber of her being that America can be a better place and that we need change to make America what it's capable of being. It is very, very hard to get up every day and do what she's done. It is hard to get out there and speak up when the odds turn against you. And what she has shown is strength and character, and what drives her is something every single one of us can and should appreciate ...

She is a woman who is, in my judgment, is made of steel. And she is a leader in this country not because of her husband but because of what she has done, because of speaking out, because of standing up. And we, when this nomination battle is over -- and it will be over soon -- brothers and sisters, we must come together as Democrats and in the fall stand up for what matters for the future of America, to make America what it needs to be.

When he moved on to Obama, Edwards' message wasn't as much about the senator from Illinois as a person as it was about the issues Edwards discussed throughout his campaign and Obama's ability to carry out the changes Edwards wants to see in the U.S. Edwards hit repeatedly on his familiar theme about "two Americas" -- a rich one and a poor one -- and told the crowd Obama could bring them together into one. "What brought all of us here?" Edwards asked, going on to answer his own question:

What brought all of us together is the profound belief that we can change this country, that there are servicemen and -women serving in Iraq who can come home starting today, that our kids deserve to go to better schools than we went to, that we can run our cars on something other than oil, that we have good jobs that can fill these empty factories and that the anxiety that all of our people face every day can change when we finally make two Americas one America for every single one of us ...

And the reason that I am here tonight is because the Democratic voters in America have made their choice, and so have I. There is one man who knows and understands that this is a time for bold leadership. There is one man who knows how to create the change, the lasting change, that you have to build from the ground up. There is one man who knows in his heart that it is time to create one America, not two, and that man is Barack Obama. This is not gonna be easy; it's gonna be the fight of our lives. But we're ready, because we know that this election is about more than the tired old hateful politics of the past. This election is about taking down these walls that divide us so that we can see what's possible ... Barack Obama understands that to his core ...

We've been in this kind of place before ... We will meet this challenge again. This is who we are. This is our moment. This is our time to take down these walls, to close our divide and build one America that we all believe in. If you want that, if you believe in that, then join me in helping send Barack Obama to 1600 Pennsylvania Avenue because what all of us believe is in this America that we love so much. No matter who you are, no matter who your family is, and no matter what the color of your skin, none of those things will control your destiny. That one America that I've talked about is not only possible but it will be achieved under Barack Obama.

Noticeably absent from the event was Edwards' wife, Elizabeth, who was a visible presence during his campaign and has influence on her own, especially within the Democratic Net roots. She has come out previously in favor of Clinton's health plan over Obama's, and has seemed to lean toward Clinton generally recently. According to the Associated Press, Elizabeth Edwards "did not travel with [her husband] to Michigan and is not part of the endorsement."

The question on many people's minds now is what kind of weight this endorsement will carry. My standard disclaimer about the actual value of endorsements in moving voters applies here, I think -- after the era of machine politics, it's not clear that any endorsement makes a truly significant difference in that regard.

But Edwards' endorsement, and the timing of it, have some real potential for strategic importance to the Obama campaign. Clinton won a big victory over Obama in West Virginia's Democratic primary on Tuesday, and Clinton was scheduled to be all over the evening newscasts, to which she had given interviews, on Wednesday night. The Edwards endorsement took the wind out of those sails and the narrative away from Clinton -- and, importantly, from discussion about the potential weaknesses Obama would have as the Democratic nominee. Edwards' base was in the white working-class voters Obama has had trouble wooing and who went against him on Tuesday; whether he can actually help bring those votes to Obama may not matter as much, for the moment, as whether the political world and political media assume it will and go off to discussing other topics. The endorsement was also one more potent image of a party whose establishment continues to coalesce around Obama as the likely nominee.

Edwards also carries with him what the Associated Press estimates to be 19 pledged delegates. Like every other elected delegate at the Democratic Convention, they're not really bound to vote for the candidate they're pledged to, and they're not required to vote for Obama because of Edwards' endorsement either. Still, it seems fairly safe to assume that at least some will jump to Obama.

Edwards reportedly did not inform some of his senior advisors about his decision in advance; according to the AP, he wanted to tell Clinton personally first. That likely didn't ease the sting for the Clinton campaign. In a statement released to reporters, Clinton campaign chairman Terry McAuliffe said only, "We respect John Edwards, but as the voters of West Virginia showed last night, this thing is far from over."