"The Chronicles of Narnia: Prince Caspian"

Grand battles! Dazzling special effects! But where are all the people? 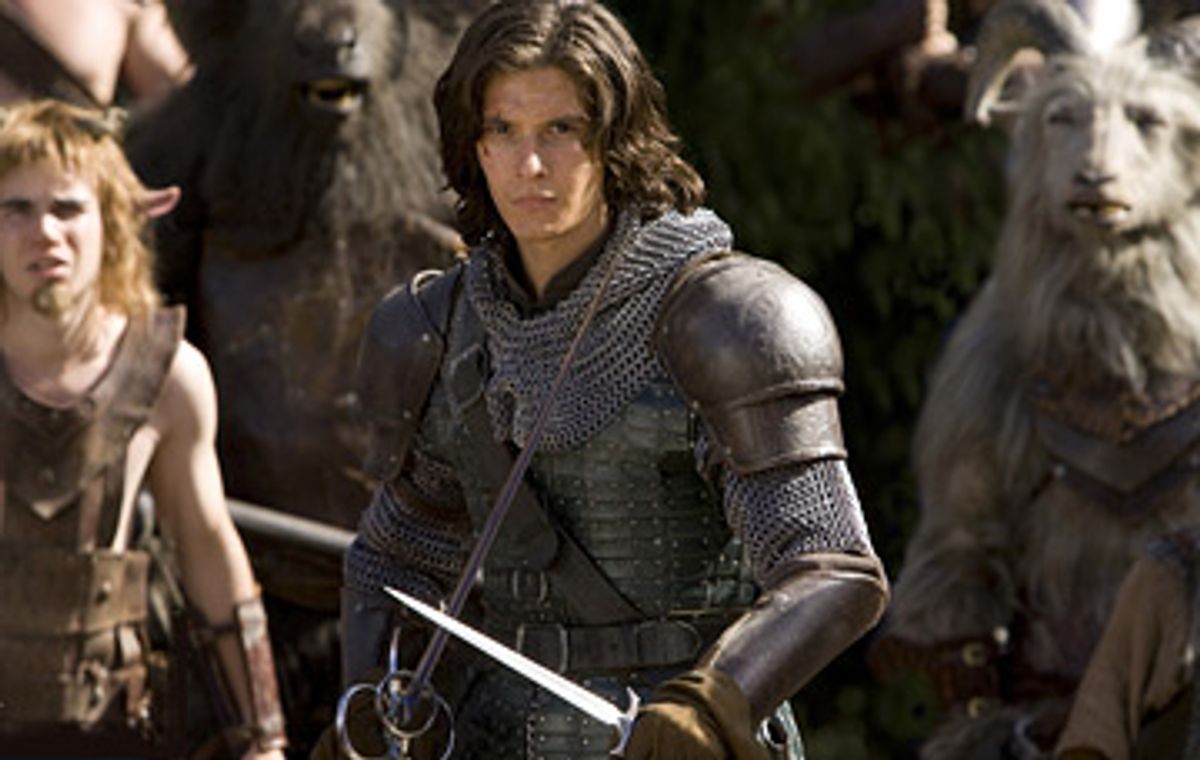 In the computer-manipulated universe of fantasy-film franchises, we've gotten to the point where filmmakers automatically assume that more is better. A grand spectacle is inherently superior to a quiet moment of visual awe; an overlong picture that's bloated in the middle isn't just boring, it's prestigious and thoughtful, worth every precious minute of our already-stretched time; and battle sequences always thrill audiences -- so why not throw in a few extra ones, just because you've got the budget?

Andrew Adamson's "The Chronicles of Narnia: Prince Caspian" is a much more elaborate, ambitious picture than the 2005 "The Chronicles of Narnia: The Lion, the Witch and the Wardrobe," and it adds up to far less. The earlier picture, based on the first book in C.S. Lewis' well-loved Narnia series (although some Lewis fans insist the series begins with a later book, "The Magician's Nephew"), was graceful and sturdy, and Adamson didn't seem to feel the need to wring a sense of wonder out of us. Most of the effects -- including the image of the talking lion, Aslan, with his lush, wind-rippled mane -- dazzled quietly. As beautiful as the movie was to look at, it also felt a little rough around the edges, giving the sense, at least, of an object that had been hand-made with care. And it presented us with a haunting villain in Tilda Swinton's White Witch, whose bluish-pale skin looked like nothing that could possibly be found in the human world.

But in this latest Narnia installment Adamson has lost his way. "Prince Caspian," which is based on Lewis' "Prince Caspian: The Return to Narnia," published in 1951, features a few inspired touches, and the four principal child and young-adult actors of the earlier picture -- just a little older now -- reprise their roles here. Yet the human characters come off as afterthoughts, figures that are moved around clumsily in the thicket of the movie's sprawling narrative. They barely exist in the context of the movie's battle sequences, which are designed to be elaborate and dazzling but instead feel simply overworked. There's very little real magic in "Prince Caspian," unless you're talking about the desperate kind of wizardry that chiefly involves waving around a checkbook.

At the beginning of "Prince Caspian," the four Pevensie children have returned to their rather ordinary lives in World War II-era London, a significant adjustment after having spent time as royalty in Narnia. Peter (William Moseley) and Susan (Anna Popplewell), the two oldest, along with the sullen-but-handsome Edmund (Skandar Keynes) and the luminous, openhearted Lucy (Georgie Henley), are waiting on the tube platform, ready to return to school, when they find themselves whisked off to a gorgeous beach that they soon recognize as their old stomping grounds in Narnia. But this isn't the same Narnia the Pevensies knew before -- 1,300 years have passed, and the country's golden age is over. Narnia no longer belongs to talking animals and mythical beasts, as in the past; it's now a troubled land ruled by the Telmarines, a race of baddie humans led by the evil Lord Miraz (Sergio Castellitto). The Pevensie children's mission, as they'll discover, is to help the rightful heir to Narnia's throne, Prince Caspian (Ben Barnes), regain the kingdom. And because it has been 1,300 years since the children were last in Narnia, most of their old friends are gone. (That means, sadly, that the jaunty faun, Mr. Tumus, played by James McAvoy in the first picture, doesn't make an appearance.) But they do make new friends, among them a surly, red-bearded dwarf named Trumpkin (Peter Dinklage), a fierce fighter whose gruff temperament masks a soft and loyal heart.

Adamson -- who wrote the script, along with Christopher Markus and Stephen McFeely -- has lost (though perhaps "jettisoned" is a better word for it) the elegant simplicity of the structure of Lewis' book. He doesn't just flesh out certain details, as is any filmmaker's right; he makes top-heavy additions that break faith with the source material. The climactic battle scene of "The Lion, the Witch and the Wardrobe" felt vital and thrilling, possibly because it had something of a ragtag quality. But the giant battle sequence that caps "Prince Caspian" is so polished, and so super-enhanced, that it comes off as nothing more than an effort -- a failed one -- to top the wow factor of the battle scenes in the "Lord of the Rings" movies. In an earlier sequence, Adamson takes some care to give us an emotional understanding of the weight of warfare: There's a horrific moment in which a number of the good guys are left behind by their comrades, doomed to death, and it's one of the few sequences in "Prince Caspian" that has any real dramatic power.

But later in the picture, that kind of subtlety is forgotten, or abandoned: Adamson apparently believes we're supposed to get excited by throngs of CGI soldiers in shiny armor, but the action isn't compelling; it's just noisy and overwrought. And a one-on-one sword fight that ought to be magnificent is too overloaded with computer fakery to have much resonance.

It didn't have to be that way. There are a few marvelous touches that fulfill some of the promises made by the first movie, particularly an early sequence in which the mosaic tiles decorating the wall of a London tube station fall away, gradually, to reveal bits of the gorgeous natural greenery of Narnia, a lovely visual metaphor for the idea that civilization must never cease to look to nature for inspiration. And, like the earlier movie (and like the "Lord of the Rings" pictures), "Prince Caspian" does recognize that a fantasy world is much more compelling when it incorporates elements of the natural one: The movie (shot by Karl Walter Lindenlaub) gives us lots of sparkling water and feathery green forests that look both real and otherworldly.

But where are the people in "Prince Caspian"? The camera spends too much time gazing adoringly at Barnes' Caspian, who's perfectly good-looking in an early-'80s Rick Springfield kind of way, but who doesn't give much back to the camera. The young actress Georgie Henley, as the littlest Pevensie, Lucy, once again gives the best performance of the ensemble: She navigates this new, more dangerous Narnia with a sense of lightness and resolute, childlike bravery. And yet there just isn't enough of her. "Prince Caspian" is elaborate filmmaking, all right. It's the magic of the human touch that's missing.