The "straight talker" has trashed anyone who dared suggest a withdrawal date. Now he's floated one of his own. 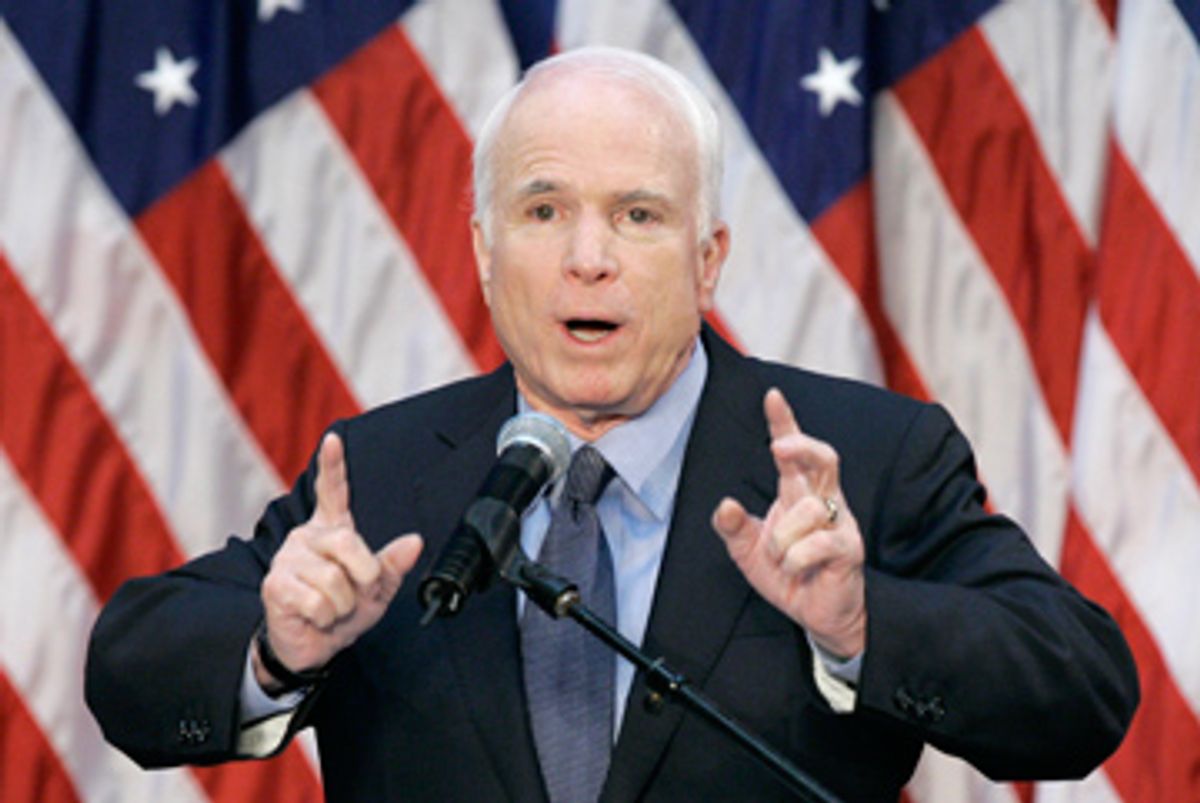 For a straight-talking maverick, John McCain certainly knows how to parse and pander. During this year's campaign he has already flipped and flopped on such major issues as taxation and immigration to pacify the Republican base -- but now he has executed a stunning reversal of position on Iraq war policy, which he has often touted as the symbol of his political steadfastness.

The man who scorched poor Mitt Romney because he once alluded to a timetable for the withdrawal of U.S. troops promised on Wednesday to bring them home by January 2013, or less than five years from now. We will have "won" by then, so why not?

The Columbus, Ohio, speech into which McCain tucked this convenient guarantee was a happy description of the utopia we will inhabit following his first term as president. Most of these assertions are hardly worth arguing over, since the candidate provided little or no explanation for how he hopes to achieve drastically reduced healthcare costs, vastly improved public education, or any of his other enticing promises.

But Iraq is a different matter, because McCain has attacked both Democrats and Republicans repeatedly for daring to suggest a date for withdrawal. Ever since the last time he discussed how long he expected U.S. troops to remain in Iraq -- when he made the mistake of mentioning a hundred years as a possibility -- his campaign has complained bitterly that his remarks were distorted. To avoid anything like that happening again, here is what he said in Columbus on the subject of Iraq, in full:

"By January 2013, America has welcomed home most of the servicemen and women who have sacrificed terribly so that America might be secure in her freedom. The Iraq War has been won. Iraq is a functioning democracy, although still suffering from the lingering effects of decades of tyranny and centuries of sectarian tension. Violence still occurs, but it is spasmodic and much reduced. Civil war has been prevented; militias disbanded; the Iraqi Security Force is professional and competent; al-Qaida in Iraq has been defeated; and the Government of Iraq is capable of imposing its authority in every province of Iraq and defending the integrity of its borders. The United States maintains a military presence there, but a much smaller one, and it does not play a direct combat role."

He then went on to predict that the Taliban, too, would be largely defeated in Afghanistan, while we will be mopping up "the remnants of al-Qaida," with the help of the Government of Pakistan, which presumably also helped us to kill or capture Osama bin Laden and deny any safe haven to the terrorists.

What McCain omitted from his uplifting address were any details concerning how he expected to achieve these brilliant results, which sound fantastically remote from the actual facts on the ground at present. In Afghanistan, for instance, the NATO coalition is barely holding the line against the Taliban, as the new government in Pakistan seeks negotiations rather than confrontation with the Islamist militants in its frontier regions. And in Iraq, the notion of a "professional and competent" security force or even a real government remains as distant as when the surge urged by McCain began last year.

Perhaps the Columbus speech was merely what corporate public relations specialists call a "vision statement." Certainly there are enough mountebanks, phonies and professional lobbyists surrounding the straight-talker to convince him that this would be a good idea. These smooth advisors presumably expected everyone to forget that their candidate has denounced as appeasers and worse anyone who dared to suggest a target date, a benchmark or a timetable for getting out of Iraq.

What is most insulting about this ploy, obviously designed to insulate McCain from public discontent over the war, is that he must know how fraudulent it is. He knows that even under optimal conditions we cannot bring "most" of the troops home in less than 16 months. If he can do the arithmetic, he knows for that level of withdrawal to occur by January 2013, the victory he touts would have to be achieved within two years after he takes office. Many analysts think that the conditions he sets forth will never be achieved, period; nobody believes they will be achieved within the next 30 months.

McCain also knows that the troop levels undergirding the surge cannot be sustained much longer, let alone for another two or three or five years. This war has already inflicted grave stress on the readiness of the Army and Marines, which will take a long time and a large investment to repair.

Instead of chanting "flip-flop" like the Republicans did to John Kerry, maybe we should look on the brighter side of McCain's latest somersault, and simply accept his decision to reduce the occupation's prospective duration by 95 years. At this rate, by November he will be promising that the war will be won and the ponies will magically appear just as soon as he is inaugurated.