A band of gold

And it's still the dream we hold, even if our marriage is -- for now, anyway -- legal. 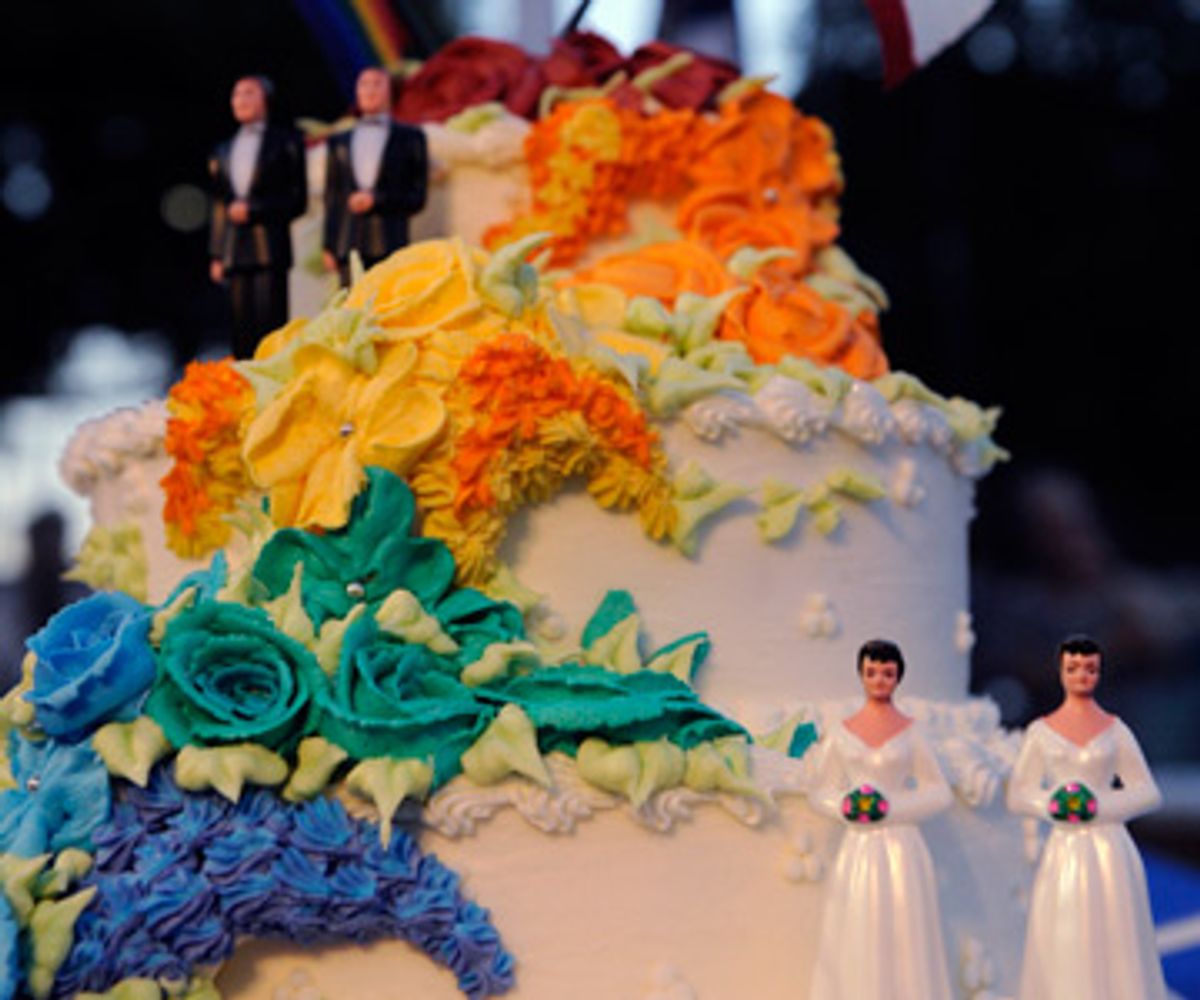 I never bothered taking off the ring.

A little over four years ago, I swung by a jeweler and bought a $40 gold band, rushing to an event I'd never expected would happen -- my wedding. Martha and I, who had been together for 11 years then, were married, with our daughter as witness, at San Francisco's City Hall, in the great Valentine's Day uprising of affirmative civil disobedience.

Along with 4,000 other couples, we received what many of us hadn't known we were looking for: legal families, a laundry list of new rights and obligations, and the teary, cheering welcome of our fellow citizens.

Strangers kissed us and thrust carnations into our arms. A little girl, on the steps of City Hall, shyly gave my bride a handwritten note, in pink magic marker, reading "Congratulations on your marriage." My mother was so happy she almost wept when I called her with the news. My sister yelped with joy. My brother's voice cracked. "Oh, Sara," he said. Then, "I guess we're gonna have to buy you a kitchen appliance, now that you're legal."

But our next-door neighbor, Isabel, who was 6, looked confused when her parents ran into our backyard whooping congratulations. "I thought Sara and Martha weremarried," she said.

Of course we were married, in any real sense of the word. We'd supported each other in sickness and health, raised a child, shared a home and a bank account, joy and disappointment and stupid arguments. We used the word "wife" to describe one another, and everyone from our employers to my church knew we were married.

But our child was technically a bastard. Our family did not legally exist. And though I could casually pick up a $20 form from the county clerk giving me the right to officiate at the marriage of our heterosexual friends, until that day at City Hall I had no idea I'd ever wear a wedding ring myself.

The law is not always an instrument of sufficient subtlety to be capable of codifying the truth, not to mention common sense. Just a few months after the San Francisco weddings, the courts pronounced all 4,000 marriages unlawful, "void from inception," and they were annulled with a wave of the judicial hand. I fell back on Isabel's interpretation: We were married. I had a spasm of rage at the injustice of it all, but I continued to introduce Martha as my wife -- even though, in a fairly kinky turn of events, she was now, officially, also my ex-wife.

So I'm very happy about Thursday's California Supreme Court ruling that all citizens, without exception, share the right to marry and be part of an "officially recognized and protected family." But it's hard to summon up too much excitement about remarrying -- especially as the court decision could itself be invalidated in November. Conservatives have gathered more that a million signatures for a ballot measure that would amend the California constitution to make same-sex marriages illegal. I'm not sure I can stand to have my marriage to my wife annulled one more time.

For now, I'm just going to keep wearing the ring.