Eccentric scholar Joseph Needham devoted his life to documenting the brilliant innovations of Chinese civilization -- and the mystery of why the West eclipsed it. 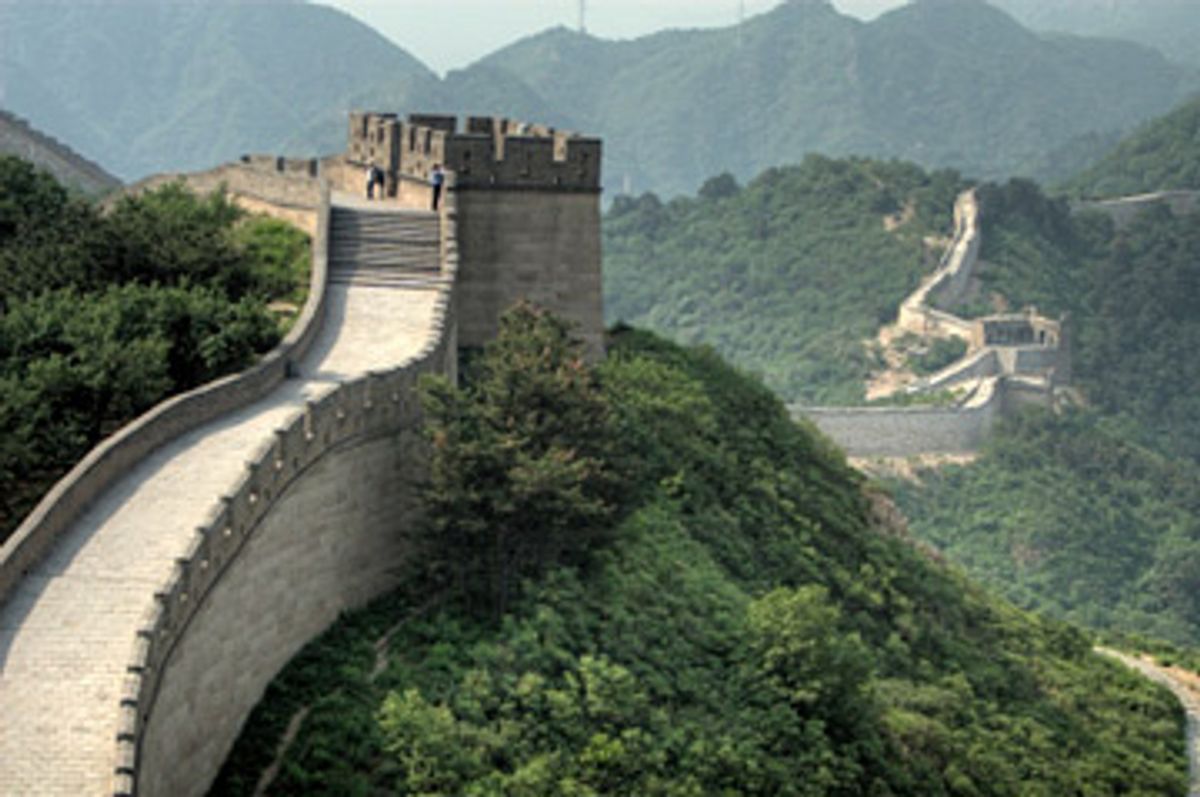 For reasons lost to history, my late uncle decided at some point in the early 1970s to purchase, one by one, volume after volume of Joseph Needham's magisterial work, "Science and Civilisation in China." My uncle was no China scholar, never visited Asia, and rarely discussed what he had learned from perusing Needham. I don't even know for sure that he did read the books, though perhaps, like me, the eventual inheritor of the volumes, he dipped in from time to time to dabble in the industrial uses of bamboo during the Tang Dynasty, or to freshen up on the techniques of porcelain manufacture in the kilns of Jingdezhen, or to marvel that the Chinese invented the wheelbarrow a full thousand years before the Europeans got around to the job.

Or perhaps, also like me, my uncle hoped that if one day he did manage to read Needham's epic from start to finish, he would learn the answer to the famous "Needham question": How did it come to pass that a civilization with such an astounding history of inventiveness and scholarship and intellectual curiosity failed to make the leap into the modern world of science? Where did China go wrong? Why did the industrial revolution take off in Europe, and not China?

Or maybe all that was required was a casual glance at one of the many fulsome blurbs on the back cover of Vol. I, "Introductions and Orientations" -- "Perhaps the greatest single act of historical synthesis and intercultural communication ever attempted by one man" -- and my uncle decided that no home library could be complete without such a masterpiece. In any event, a failure to read every word of the 15 volumes that my uncle ultimately assembled is understandable: "Science and Civilisation in China" is a work so massive and so detailed it is almost impossible to imagine reading all of it, much less writing it, even if it does rank, as Needham biographer Simon Winchester writes in "The Man Who Loved China," "among the great intellectual accomplishments of all time."

Those 15 volumes, plus another that I purchased myself (918 pages on ceramic technology!), now sit in my bedroom occupying pride of place on their own dedicated bookcase. Because while my uncle never displayed much in the way of overt sino-philia, my own story is different. I began studying Chinese in college and headed to Asia a few months after graduation. I have spent countless hours tracking down the elusive secrets of the Chinese written language through scores of dictionaries, and fallen into equally deep infatuations with Ming Dynasty Neo-Confucian poet-sages and the spiciness of Sichuan pork slivers stir-fried in "the style of fish."

I feel a kinship across the decades with Dr. Needham. I believe I can imagine exactly what it was like for the esteemed biochemist to disembark from "a battered old Douglas C-47 Skytrain" in Chongqing in March 1943, and feel instantly, passionately overwhelmed by a culture equal parts alien and entrancing. I believe all the outsiders who have become fascinated with China can relate. There's a brilliance to the first part of the title of Winchester's biography -- "The Man Who Loved China" (let's ignore for now the ungainly subtitle, "The Fantastic Story of the Eccentric Scientist Who Unlocked the Mysteries of the Middle Kingdom") -- because even as it implies that this one man may have loved the civilization to an extent greater than the vast majority of the rest of us, the words still strike a chord with anyone who has been bitten by the Asia bug. We all savor that taste -- Needham just took it to the next level. I've been known to haunt used bookstores looking for obscure out-of-print China-related gems. Chinese acquaintances of Needham's sent him, unsolicited, priceless encyclopedias of Chinese history and culture totaling thousands of volumes. I taught myself how to cook Sichuan food. Needham taught himself the entire history and philosophy of Chinese science.

In Winchester's account of the creation of the Oxford English Dictionary ("The Professor and the Madman," 1998) he demonstrated a facility for profiling odd scholars. In "The Man Who Loved China," Winchester hits the eccentricity jackpot. This came as a surprise to me. Call me prejudiced, but I presumed that a Cambridge don who devoted half a century to compiling a history of Chinese science might have been a bit fusty. I did not expect to learn that he was an avid nudist, a wild Morris dancer, "an accordion player, and a chain-smoking churchgoer" and a supporter of gay rights who was a participant in an "open" marriage that allowed him to carry on a wife-approved decades-long affair with the love of his life, a Chinese woman named Lu Gwei-djen. I also had no idea of the extent of his radical left-wing politics or of his embarrassing role in a McCarthy-era contretemps over whether the United States used biological weapons in the Korean War. His efforts as a diplomat on behalf of the British in World War II to ensure that Chinese scientists received the necessary resources to keep the fires of intellectual inquiry alive even as Japanese bombers flew overhead were a complete revelation.

So there is much to learn from "The Man Who Loved China," an enjoyable, breezy read, well suited for reading on the chaise longue, gin-and-tonic in hand. But there is also a telling, unresolved paradox running through Winchester's tale. After an early and hugely successful career as a biochemist, capped off by being named a member of the ultra-prestigious Royal Society at the tender age of 41, Needham devoted the remainder of his life to, on the one hand, documenting how technologically far ahead China had been for millennia when compared to the West, and on the other hand, striving to understand why Europe suddenly jumped in front -- a monumental tectonic shift that dominates the reality of globalization to this day.

That, again, is "the Needham question," and the great irony is that despite the 24 volumes, 15,000 pages and 3 million words written by Needham and his collaborators and successors, we still don't have a satisfactory answer to that question. It could be that very indeterminacy that explains why Winchester devotes far more time to telling us about Needham's rambunctious, irrepressible love life and his freewheeling socialist politics than he does to teasing out the implications of this central conundrum. If Needham was baffled, what hope for a mere biographer? But that's a shame, because the Needham question is a challenge that forces all students of China, or, for that matter, students of the history of science, or of history in general, to wrinkle their brow. A truly satisfactory appraisal of Needham's life would make "the Needham question" a central theme, rather than sequester it off in a few paragraphs in an epilogue.

But Winchester appears more comfortable immersing himself in the particularities of a peculiarly British way of academic life than he is in tackling such hard questions. When Winchester writes, of Needham's life in Cambridge, "He could come whenever he wished to the fellows' oak-paneled combination rooms to take a usually indifferent sherry or rather better claret beneath paintings of forgotten divines of noble antiquity," it's not so hard to see Winchester himself wrinkling his nose at the indifferent sherry. He's a little less sure-footed when discussing the evolution of, for example, China's meritocratic Confucian bureaucracy.

In the epilogue, Winchester asserts that the consensus opinion of current Sinologists is that "China, basically, stopped trying." That's too facile a summation when one is writing a biography of a man who devoted his entire life to understanding why China failed to capitalize on thousands of years of scientific and technological innovation. Winchester then skips through the main contending theories that attempt to explain China's failure: China's bureaucracy siphoned talent away from a potentially entrepreneurial merchant class, China did not have the spur to competition that Europe's many warring states inflicted on each other, China's totalitarian government quashed initiative.

But Needham himself, writes Winchester, "never fully worked out the answers." (Although he did propose, halfheartedly, a variation on the bureacracy thesis in his essay "General Conclusions and Reflections," a portion of which is online.)

Perhaps it was because he was too close to the topic, seeing many trees but not enough forest. And though he makes an attempt at offering up some answers in his final volume, he never seems fully convinced of his own arguments, and never fully explains his reasons. It has been left to others to take up the challenge in his place.

There is a poignancy to Needham's unfulfilled quest that evokes a classical drunken Chinese poet lamenting the transience of spring or the unknowability of the Dao. Joseph Needham dedicated so much prodigious brainpower to answering one transcendent question, and created a work of immense, lasting genius, but he never arrived at an answer! One can almost hear the original Daoist master, Zhuangzi, chuckling. Foolish indeed are they with the hubris to believe they can understand how history unfolds.

Needham's futility makes a mockery of Winchester's subtitle: Needham did not "unlock" the mystery of the Middle Kingdom -- if anything, he boosted the intensity of the paradox by establishing just how incredible and vast China's technological achievements were, before "progress," to all intents and purposes, halted.

It could well be, as Winchester proposes, that in another century the "Needham question" will be moot. Fewer and fewer people regard China today as intrinsically backward, or incapable of innovation. On the contrary -- by all available indications China is gearing up for a big stretch run that will make the fumbling of the Qing Dynasty seem like just a bad early morning daydream. Measured against the great scale of Chinese history, the last few centuries may just be a bump in the road.

So what does that mean for Needham's legacy?

Nothing to worry about. The glory of "Science and Civilisation in China" is that the big unanswered questions are ultimately irrelevant in the sheer, astonishing face of the glories of China's past so painstakingly documented. Those books, lined up together by my bedroom window, don't need to explain China; they are China. I find them immensely reassuring -- even if China is thousands of miles away from me and my own Chinese has rusted away to the point of uselessness, all I need to do is pluck out a volume at random, and I am there.

Before long, of course, the humanistic Renaissance curiosity about all exotic things asserted itself strongly in the West, but this was an old Chinese tradition too which had been very powerful, for example, during the Tang period. Said Huang Sheng-Tseng:

Amid the thundering billows and surges rearing mountain-high, helped by their flying masts and labouring oars, now with their cordage tightly strained and now under loosened sails, the envoys journeyed many myriads of li, and in their voyaging to and fro spent well-nigh thirty years ...

Then, their vessels filled with pearls and precious stones, with eagle-wood and ambergris, with marvellous beasts and birds -- unicorns and lions, halcyons and peacocks -- with rarities like camphor and gums and essences distilled from roses, together with ornaments such as coral and divers kinds of gems, the envoys returned.

Needham went to China and came back with pearls and precious stones beyond measure, loaded down with more eagle-wood and ambergris than most mortals could hope to contemplate. And then he shared it all with the rest of us.