Obama's "Appalachian problem" is a symptom of his party's larger "rural problem." But a new poll offers hope for the fall -- provided the Democrats show rural voters some respect. 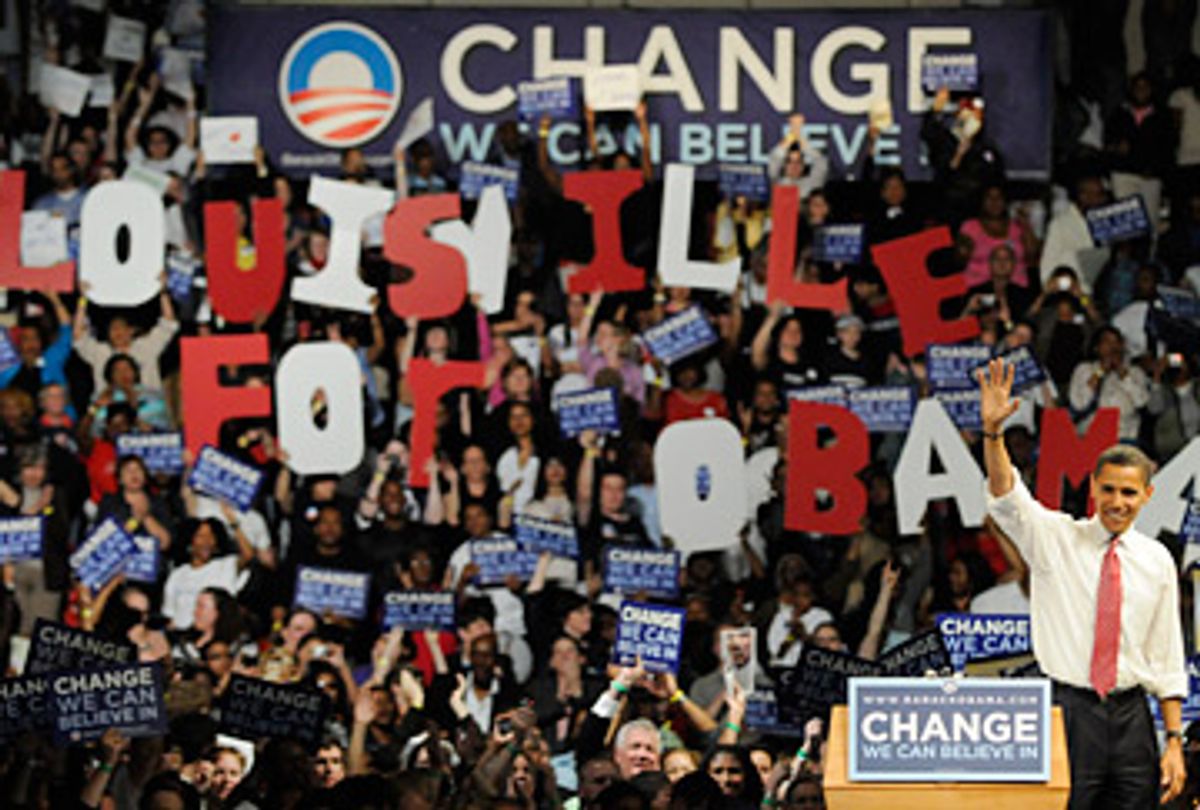 In analyzing the returns from last week's West Virginia Democratic primary, a phalanx of reporters and commentators have explained Hillary Clinton's landslide victory by pointing out that West Virginians are a special set of Democrats, white, low income and undereducated. Some, like Josh Marshall of Talking Points Memo and Jonathan Tilove of the Newhouse papers, have linked the lackluster performance of Barack Obama in West Virginia to a larger Appalachian problem. These writers connect the presumptive nominee's defeat in West Virginia, his previous losses in Ohio and Pennsylvania, and an anticipated poor outing in Tuesday's Kentucky primary, to the historical, geographic and cultural imperatives shared by Appalachian mountain people.

The legions of pseudonym-laden online posters who follow in political punditry's wake are less restrained in describing the shortcomings of Sen. Clinton's Appalachian supporters. They suggest it has to do with her voters being racist, toothless, shoeless, and prone to marrying their cousins. In short, they characterize these "special" Democrats in much the same terms they used in quieter times to describe Republicans.

Mountain people have long been considered exotic. The eminent British historian Sir Arnold Toynbee described the residents of Appalachia in 1947 as "the American counterparts of the latter-day white barbarians of the Old World -- Rifis, Albanians, Kurds, Pathans, and Hairy Ainus." They have also served as a sort of Rorschach test for the rest of America. When the country needs iconic war heroes like Alvin York or Jessica Lynch, mountaineers fill the bill. If, periodically, this rich nation needs people to pity, poverty-stricken hillbillies make excellent poster children. And if backers of the Democratic Party's presumptive nominee need to explain why their preferred candidate is not connecting with downscale, rural voters -- a demographic that was once key to Democratic electoral success -- Appalachia can again answer the call. Obama supporters and members of the media can place the blame for his poor fortunes not on the candidate or his message, but on the moral failings of those benighted mountain people.

However, the unnerving truth for the erstwhile party of Jefferson may be that Appalachia, for all its legend and lore, is not that different politically from the rest of the small-town and rural parts of the country where 60 million of us live. And that could mean trouble for the fall.

The primary in West Virginia, a very rural state, was a blowout. Clinton won it by 41 percent, and she won all 55 counties. Similarly, in rural Ohio she beat Obama by 33 percent. In Pennsylvania, a much more metropolitan state, she won 56 of the state's 63 counties, including Allegheny, Appalachia's most populous county, where Pittsburgh is located. Her margins in the rural Appalachian counties of western Pennsylvania were West Virginia-size.

Still, when you look at the earlier aggregate rural vote on Super Tuesday, the preference for Clinton is clearly not confined to Appalachia. Combining the results from 22 diverse states in the Northeast, South, Midwest and West on Feb. 5, Clinton beat Obama 55 percent to 38 percent among rural voters, according to an analysis in DailyYonder.com, the news Web site of the organization I head, the Center for Rural Strategies. Those aren't West Virginia margins, but they aren't close. They shine a light on a vulnerability that Democrats have shared through the last several election cycles.

Nationally prominent Democrats have often come into the mountains of eastern Kentucky, where I live, to see and to be seen. Perhaps that's because the idea that government should keep an eye on people who were not prospering was once part of the essence of the Democratic Party. Or perhaps it's because they know there are votes here.

LBJ came to Martin County just before announcing his War on Poverty in 1964. In 1968, Sen. Robert Kennedy made a fabled tour of small Kentucky coal towns shortly before announcing his own candidacy. In 1988, Jesse Jackson brought out thousands of mountain people for his presidential campaign rally in Hazard. Sen. Paul Wellstone reprised the RFK tour in 1998 while exploring his own presidential prospects. And last year long before the primaries John Edwards brought his "two Americas" tour to the mountains to attempt to engage the press and the greater public in a conversation about income disparity. I know that he was moved and concerned by what he saw in Kentucky, because I was driving him around. I listened to Edwards try to discuss Appalachian poverty with several reporters from the national press. They were far more interested in the size of his house and the price of his haircut.

But lately, other than Edwards, we haven't had many visitors. Maybe the party that once welcomed Appalachian coal miners and hillside farmers has moved on. The national Democratic Party has become younger, richer, hipper and far less interested in preserving an identity forged in the Great Depression. Who really wants a political party full of poor mountaineers? Perhaps, in the minds of some, "Coal Miner's Daughter" has been supplanted by "Deliverance."

That the Democrats have all but abandoned rural America in policy and practice during recent presidential election cycles may have to do with a faulty demographic map -- a lack of awareness of what it really takes to win a presidential election -- or it just may have to do with their candidates' comfort level out beyond the sprawl. Still, it says something about who wins and loses in the fall. Democrats should not be surprised when rural voters drift toward those institutions that stick around, like the churches, which often reinforce socially conservative ideas, and when rural voters prefer those politicians who actually ask for their votes.

A new bipartisan poll of rural voters in battleground states (conducted by Greenberg Quinlan Rosner for my organization) shows that Barack Obama is in a similar position to that of John Kerry five months before the 2004 election. Obama trails John McCain by 9 points. Kerry trailed Bush by 9 in the rural battleground in June 2004.

For all the good it will do her, Clinton is dead even with McCain. She must know by now that any margin she receives from Kentucky Tuesday will be written off as too little, too late, and a regrettable reflection of Obama's problems with the Hairy Ainu of Appalachia.

In 2004, Kerry lost the rural battleground by about 20 percent and with it a close election. The rural vote was particularly telling in the pivotal state of Ohio, where a massive Democratic get-out-the-vote effort in cities and suburbs was more than offset by increased Republican success with rural voters. Many of those rural voters were Appalachian and blue collar, people who back before the name-calling were reliable Democrats. They gave Bush a second term.

Yet there is plenty in the numbers to give Obama heart, starting with the 9-point deficit that he and Kerry have in common five months out from the general election. When Kerry was down 9 in rural counties, he had a commanding lead nationally. And that was before he was Swift-boated and before a campaign that advocated almost nothing for rural communities other than the Democratic Party's reflexive support for farm subsidies, which largely benefit corporate farms. (Only 1 percent of rural Americans earn their primary living on farms, but Democrats don't know this.)

Surprisingly, Obama has already achieved the same standing in the polls that Kerry enjoyed when things were going well. And for Obama, this comes after weeks of relentless news coverage of his ex-preacher and after the senator's own costly "those people" moment when he was caught at a private fundraiser using broad stereotypes to characterize small-town and rural voters. (They are bitter. They cling.)

What our polling also shows is that rural communities are experiencing measurable economic distress, especially with the out-of-control price of fuel. Rural voters express concern over the mounting cost of healthcare and of the Iraq war. They are also measurably displeased with the country's direction. On the issues, there is clearly prime territory for Obama to seize.

Democratic pollster Anna Greenberg says that this year the presidential election could be up for grabs in rural parts of swing states. "This competitiveness reflects the ongoing problems facing the Republican brand, as well as the deep economic anxiety rural voters feel. Concerns about the cost of living are intense, particularly gas prices in a part of the country where many drive long distances to work. Moreover, we see real ambivalence about all three presidential choices -- each candidate has a real opportunity to define the race on his or her terms."

Yet if things do go according to Hoyle and Obama takes the nomination, he still faces the steepest climb of the three candidates in rural America. Bill Greener, the poll's Republican consultant, says, "Obama faces a real challenge in proving that he can attract support from the diversity of voter groups outside his base that he will need to win. As of now, it would appear there is a cultural divide between Obama and these voters that resembles what we have seen in the past for a variety of Democratic presidential candidates, including George McGovern and Michael Dukakis."

How Obama fares in rural America may, in the end, have to do with whether he shows up. In politics not showing up and losing are kissing cousins. Obama made three visits to West Virginia. In Kentucky, he limited himself to appearances in the state's two biggest cities, Louisville and Lexington. He didn't come to my part of the state, or try to make any friends in rural areas.