Lots of parental angst, sure. But where was all the teen sex? 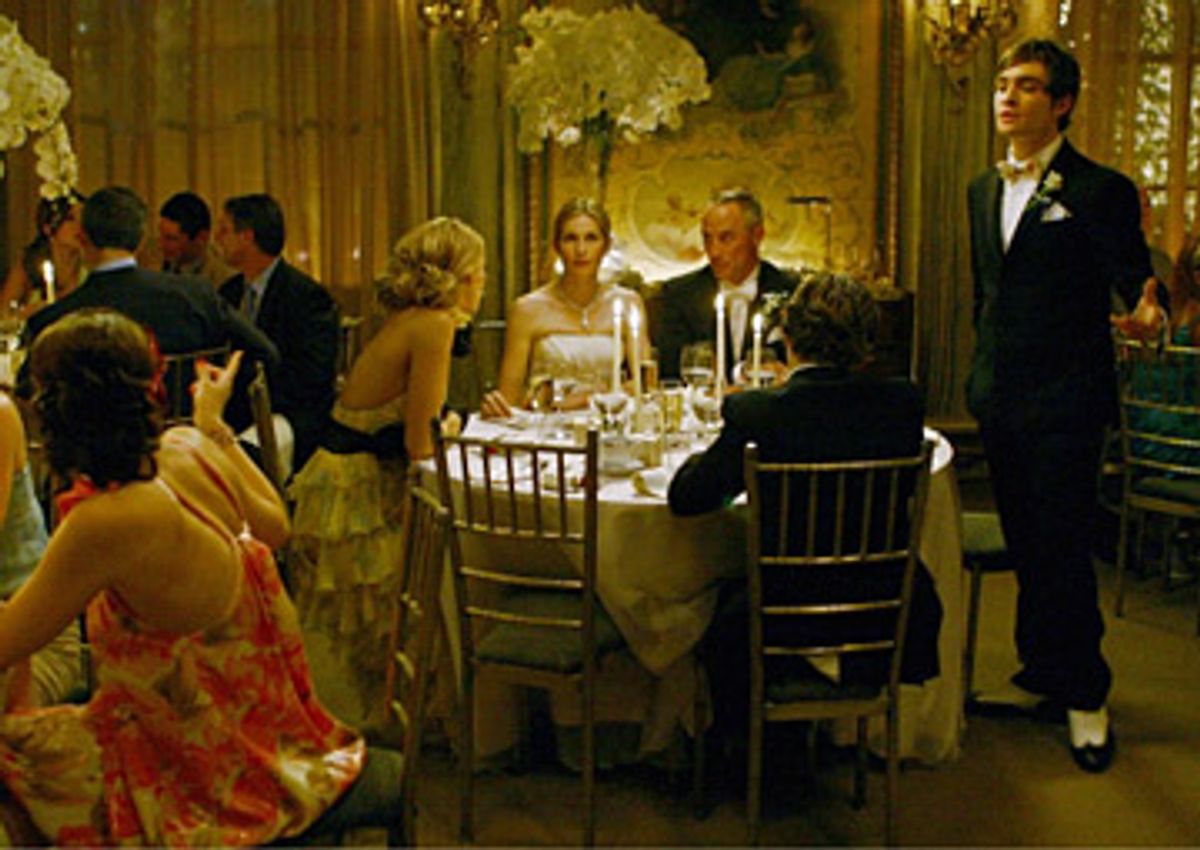 If there's anything that America's teenagers will take away from Monday night's "Gossip Girl" season finale, it's a reaffirmed conviction that parents are lame. Watching the CW show, it would be hard to argue otherwise; the parents on "Gossip Girl" are lame. They have the crappiest puns. They don't stab each other in the back. They don't trade their show ponies for cocaine, or screw in a limo. That, in the "Gossip Girl" universe, is what teenagers do, and that's why the parent-centric season finale was such a crushing disappointment. It needed a whole lot more teen sex and a lot less parental angst.

It's especially maddening because, since its return from the writers' strike, "Gossip Girl" had been in consistently fine form. The show had seemingly perfected its half-sincere, half-satirical tone; the writing had been snappy, and the plotlines had been delightfully dark and twisted. It had also been on the verge of setting a new world record for most names dropped in a prime-time television show.

For much of the second half of the season, Blair Waldorf (Leighton Meester), the show's conniving bitch, had been fighting it out with Brooklynite Jenny Humphrey (Taylor Momsen) for the position of queen bee at their Upper East Side private school. It was a battle fought with snappy barbs, underhanded subterfuge and dinner reservations -- finally won by Blair with the outing of Jenny's boyfriend. It's the story arc that finally made me a true believer in "Gossip Girl," and the focus on Blair -- who is the best thing about the show -- gave the writers the chance to break out their best snark.

In the most recent episodes, the show managed to one-up itself once again with the introduction of Georgina Sparks (Michelle Trachtenberg), a childhood friend of Serena's (Blake Lively) with a penchant for drugs and blackmail. Trachtenberg was pure, delicious evil -- clad in oversize sunglasses and shiny leggings, and doing her best impression of Sarah Michelle Gellar in "Cruel Intentions." Georgina sent Serena dirty gifts, drugged her on the night before her SATs, blackmailed her with an incriminating videotape and, finally, seduced her boyfriend, Dan (Penn Badgley), while pretending to be an out-of-town stalker victim. None of this was believable in the slightest, but dang if it wasn't fun, and when Serena revealed that her videotaped transgression was a, gasp, murder, the show couldn't get any more salaciously awesome.

Unfortunately, as last week's episode and Monday's finale proved, it really couldn't. The plummet began last week with the revelation that Serena's "murder" was more like an "accidental drug overdose" and the reintroduction of the parental love triangle among Rufus Humphrey, Lily van der Woodsen and Bart Bass. As the finale began, Serena and Dan were on the outs (due to Georgina's meddling), Georgina had managed to seduce Dan, and Rufus and Lily had rekindled their romance on the eve of Lily's marriage. The parents -- particularly Rufus -- have always been the weakest part of the show, useful only as wooden foils for their sassier children, so it wasn't a good sign that the blowout finale would be premised around Lily and Bart's wedding, and the episode proved to be as plodding as could be expected.

Before the parents took over entirely, the early part of the show provided an unsatisfying resolution to the Georgina story line, which sputtered and stalled before coming to an unmerciful end. Serena arrived at Dan's apartment to discover that Georgina had spent the night with him -- but the long-awaited showdown never came. Instead, Georgina snuck out of the room, and Serena spilled her secrets to a quiet and seemingly understanding Dan. His unlikely response: "I get it. 'I killed someone and I'm being blackmailed by a crazy girl pretending to be someone else' doesn't exactly roll off the tongue."

Then Dan -- having learned the truth about Georgina -- allied with Blair to plot his revenge, and the tables were once again set, with a sneaky meeting in the park, for a dramatic payback involving feisty takedowns and a satisfying public implosion. But instead Georgina's parents were parachuted in to Central Park to take her away. Blair and the parents chastised her for stealing credit cards and leaving rehab (setting up the episode's one good line: "At least I lasted longer than Lohan!"), before packing her off to reformatory boot camp. It was an ungraceful end to a most memorable character.

With Georgina gone, the rest of the episode was filled with plodding parent-centric story lines, all clustered around Lily's nuptials and devoid of any pretense of fun. In the end, Lily rebuffed Rufus' advances and decided to go through with her wedding (meh), Nate's dad ran away to Dominica to hide from his embezzlement charges (ugh), and Rufus' mediocre band went on tour with the Breeders (huh?). All of which was conveyed with a frustratingly high level of sincerity and none of the usual insidery New York dialogue that's been so actively educating the show's teen audience about Page Six and the Waverly Inn.

That said, there were a few bright spots in the final moments. Dan's final breakup with Serena was a sincerely touching moment, with a cringe-worthy, if slightly hokey, aftermath. The two were forced to dance together one last time for the sake of the wedding photographer. Once the photographer left, Serena said, "He's gone. You can let go." "I don't want to," he answered, and she leaned into his shoulder. It was a painful and surprisingly affecting moment, in an episode without any others.

With the wedding over, and the teenagers preparing for their summer vacation, things built toward a series of pat and irritating endings. Serena and Nate seemed to be drifting back together, as were Dan and his best friend, Vanessa. In a mildly surprising twist, Blair and Chuck reunited and planned to spend the summer together in France. Chastening those two characters with a monogamous relationship would have destroyed the funnest aspect of the show, and laid some unfortunate groundwork for the second season.

But luckily, in the episode's final moments, Chuck came to his senses and abandoned Blair at a heliport; Blair helicoptered off without him. The season may have ended chastely, but Blair and Chuck give us hope for next season. Fingers crossed, there's a lot more bad behavior to come.