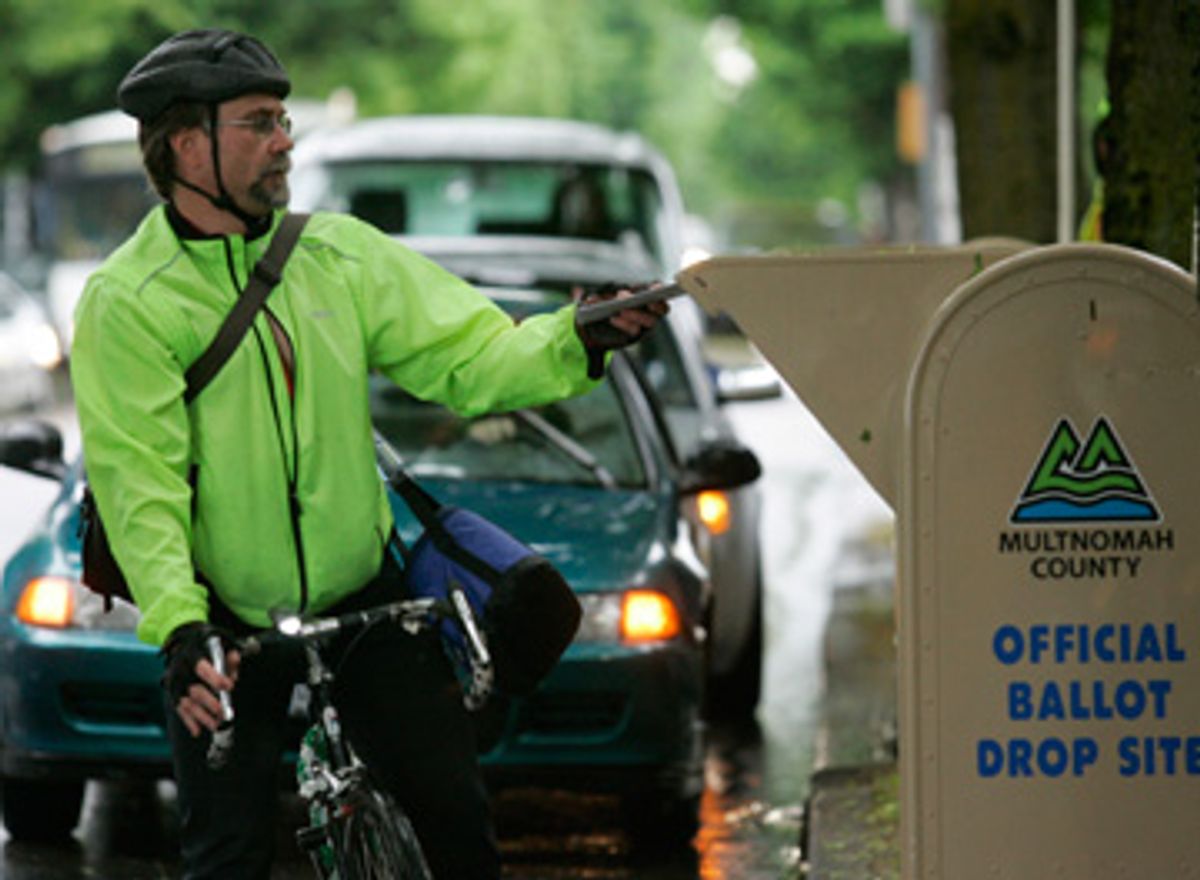 Tuesday's Oregon Democratic primary will not determine the Democratic presidential nominee, but it will be another kind of test: Whether Oregon's unique mail-in voting system can handle a national political contest that's provoked the kind of enthusiasm the Democratic race has this year.

Oregon is the only state in the nation that has 100 percent mail-in balloting for all of its elections. Sitting in the comfort of their home, voters fill out ballots and then drop them in mailboxes to return them to the state. The appeal of not having to slog through the rain to get to a polling place is obvious, but state officials say the system also reduces the costs of elections and increases voter turnout.

However, Oregon's system has never handled a primary quite like today's race.

"There's very high intensity and interest, a huge volume of calls, more interest than we ever have seen in a primary election," Annette Newingham, the county clerk in Lane County, told the Associated Press last week. She predicted voter turnout might exceed 75 percent.

As of Sunday, more than 727,000 voters, or roughly 36 percent of the electorate, had already returned their ballots, according to state officials. Oregon began mailing out ballots on May 2. The deadline to send in ballots is 8 p.m. PDT Tuesday, and election officials say they will post initial election results shortly afterward. The tallies will be updated through the night as counting continues, but a final official tally won't be available until after primary day. It will be a late night for political junkies on the East Coast.

Of course, this assumes everything goes smoothly. And as the recent Indiana primary showed, that's not always a sure bet. There's already been one snafu. The Portland Oregonian reported that Secretary of State Bill Bradbury was "hugely concerned" after officials mailed out two ballots apiece to 33,500 voters. The voters had changed their party affiliation too close to the April 29 registration deadline. The state had already prepared ballots with their previous party affiliation, so voters got one with their old registration and one with the new. State officials say the mail-in voting system has enough safeguards in place to ensure no one votes twice.

Elections experts don't expect the double balloting to cause major problems with the Democratic contest. "If this is a problem and they administer it improperly, it's much more likely to affect the down ballot races, where hundreds of votes would truly make a difference," said Richard L. Hasen, a professor of law at Loyola Law School in Los Angeles who specializes in elections.

Nevertheless, the Obama and Clinton campaigns are watching the balloting closely. And if the battles over voting in caucuses in Texas and Nevada were any indication, there could be fireworks if things go wrong.

Update: As readers point out in comments, this is not the first time Oregon is using the system. An earlier subheadline that said this was an editing error. The post itself has been updated to clarify that Oregon's system is being tested because it has to deal with what will likely be an abnormally large volume of votes, not because it's the first time it's being used. Also, to clarify, the post says that the deadline to send in ballots at 8 p.m. PDT -- any ballots still outstanding must be put in official drop boxes.