The GOP mastermind is billed as a top campaign analyst for the cable news network. But he has his fingerprints all over John McCain's White House bid. 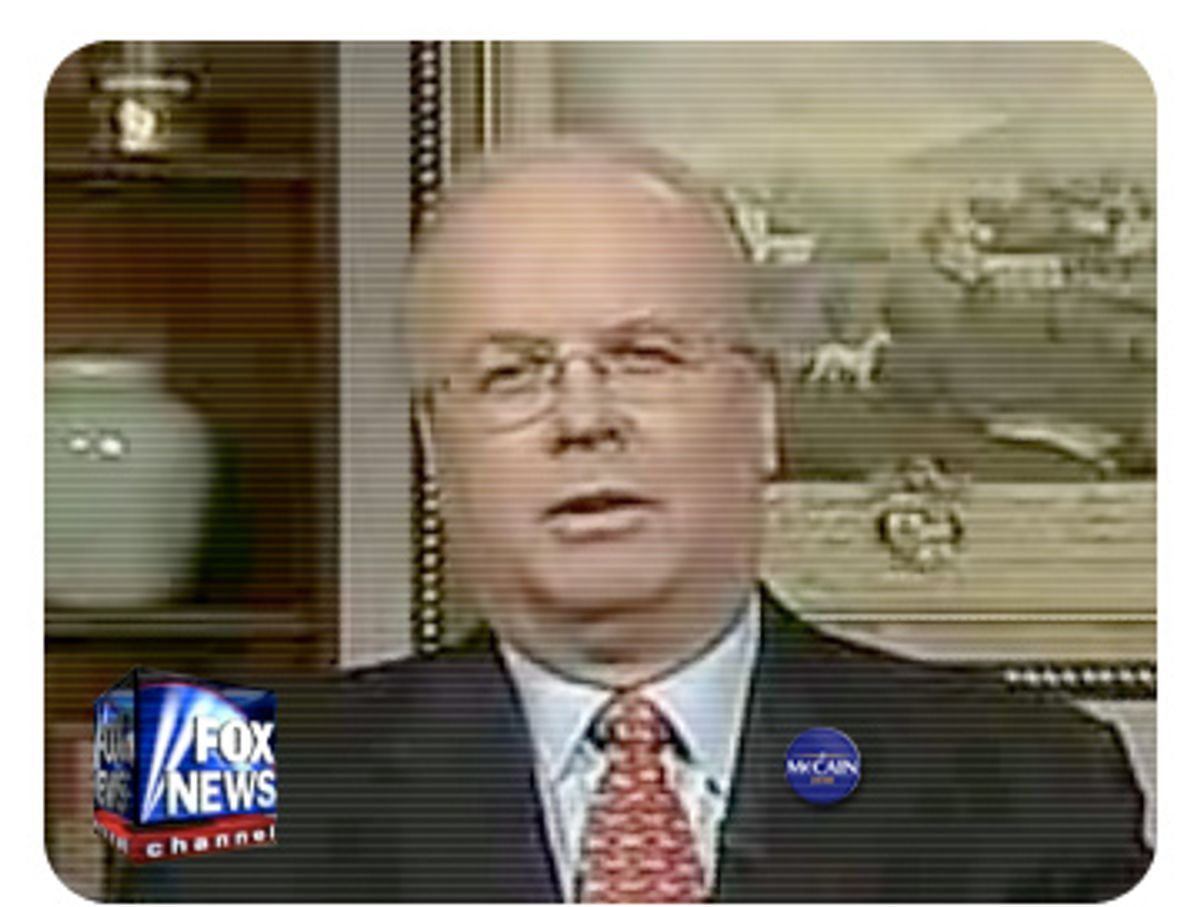 It has now been more than three months since Karl Rove first appeared on television as a Fox News political analyst on Feb 5. In no fewer than 57 appearances, he has increasingly been welcomed into the Fox News fraternity, even joking that the "Hannity & Colmes" show should be renamed the "Colmes & Rove" show. After departing from a Bush administration in political tatters last August, he has reemerged to hold forth at length on the 2008 presidential race. And he may have plenty of seasoned political wisdom to offer Fox's audience. Rove, however, is playing a strategic role that he and the network refuse to reveal to viewers.

Fox News hosts routinely introduce Rove as a "former senior advisor to President Bush," "the architect," a "political wizard" and a "famed political consultant." But never has he been introduced as he should be -- as an informal advisor and maxed-out donor to John McCain's presidential campaign.

To political news junkies, a disclosure of Rove's relationship to the McCain campaign may seem unnecessary. But whether the public simply assumes that Rove supports McCain isn't the point. The "most influential pundit" in America, as Fox likes to trumpet, should have to play by the same rules as other high-profile political analysts. For example, Paul Begala and James Carville are regularly identified as supporters of Hillary Clinton when they appear on CNN. But Rove has been able to act as an independent observer while criticizing Clinton and Barack Obama, McCain's likely general election opponent.

There is nothing shocking about Rove's attacking Democrats, of course. And his operating with a duplicitous air of independence probably isn't going to make or break Fox's claim to "fair and balanced" coverage. But will the greater public catch on?

In a May 7 Washington Post online chat with Karl Rove, the news organization correctly introduced the pundit as an "informal advisor to the McCain campaign." The Post's media reporter, Howard Kurtz, has also endorsed disclosing that Rove is a "maxed-out donor" to McCain.

And with good reason. On Feb. 7, two days after Rove first appeared on Fox News as a contributor, he donated $2,300, the maximum legal amount, to McCain's campaign. According to the New York Times, Rove's donation was part of a symbolic effort by Bush's allies "to unify the Republican Party behind its presumptive nominee."

The next day, reporters from Fox News asked McCain if he would accept advice from Rove. McCain responded enthusiastically: "He has a very good, great political mind and any information or advice and counsel he could give us I would be glad to have."

A month later, after Rove had made 14 appearances on Fox News, Politico reported that soon after donating to McCain's campaign, Rove "had a private conversation with the senator." A top McCain advisor also told the paper that Rove and Bush-Cheney '04 campaign manager Ken Mehlman were "informally advising the campaign."

Rove has denied that he is an informal advisor, telling Kurtz that "he merely has 'chitchat' with friends in the campaign." He offered a similar line during a recent Washington Post online chat, telling a questioner that he is "not certain" that he qualifies as an advisor to McCain but still has "friends at the campaign who occasionally ask [him] for reactions."

"I hardly think Fox News viewers would be surprised to learn that Karl Rove is helping the Republican presidential candidate," Begala told Salon. "Still, I believe full disclosure is best."

There's no evidence that Rove has a formal role with the McCain campaign. However, it is hard to deny that he has an active, if informal relationship.

For example, the consulting firm he currently heads has been disseminating 2008 electoral map projections to influential media outlets and party operatives. In late March, McCain media advisor Mark McKinnon participated in a public conversation about the campaign with former Bush strategist Matthew Dowd. During the talk, McKinnon displayed maps analyzing the states and their electoral votes; the maps bore the header "Karl Rove & Co." At the end of April, the Washington Times reported that such maps were compiled weekly by Karl Rove & Co., based on the latest state polls. In addition to McKinnon and the Washington Times, the maps have made their way into the hands of Fox News' own Chris Wallace. (Just yesterday, Rove's firm put out a new round of maps making a case in Hillary Clinton's favor.)

There are other ways in which Rove appears to have influenced McCain's campaign. At the beginning of April, McCain embarked on a biography tour to introduce himself to the public. According to the Atlantic's Marc Ambinder, the tour may have been Rove's idea. In an April 4 blog post, Ambinder noted that Rove had laid out the idea for such a tour during a Feb. 20 appearance at the University of Pennsylvania. Suggesting that McCain "should take a biographical tour to the places in the country that have made him who he is," Rove proceeded to list the very locations that McCain would eventually visit in April. (Although, as Ambinder pointed out, McCain actually spoke in Prescott, Ariz., rather than Rove's suggested Sedona, Ariz.).

Rove has also admitted to meeting with Sen. McCain recently. On April 22, while doing on-air coverage of the Pennsylvania primary for Fox News, Rove let slip that he "saw Senator McCain recently at a private gathering" where the general election campaign was discussed.

Rove's reluctance to directly admit a relationship with the McCain campaign may be out of concern for staying on the right side of election laws. Aside from all informal advising, he may also be coordinating the efforts of independent political groups and former Bush donors in an attempt to rekindle the type of Swift Boat Veterans for Truth strategy that many analysts believe helped sink John Kerry's campaign in 2004. Rove has one of the most expansive rolodexes in Washington, which he's been putting to use for the 2008 election: According to the National Journal's Peter Stone, Rove has been calling up old friends like Texas oilman T. Boone Pickens and casino mogul Sheldon Adelson, and convincing them to spend millions of dollars on outside right-wing groups, known as 527 and 501(c)(4) entities. An unnamed GOP consultant who "has met with Rove a few times this year" told Stone that "Karl is up to his eyeballs in this." The Washington Post has also reported that Rove is working with outside groups who aim "to influence the outcome in November."

According to Federal Election Commission rules, coordination between a 527 group and a presidential campaign -- such as discussing the content or timing of political ads -- is illegal (if difficult to prove).

Fox News is not the only media outlet that has failed to disclose Rove's ties to McCain. Whenever Rove writes for the hardcore conservative Op-Ed pages of the Wall Street Journal, the paper identifies him only as "the former senior adviser and deputy chief of staff to President George W. Bush," even though he has usually written about the Democratic presidential candidates. Similarly, Newsweek, where Rove is a contributor, simply calls him a "former senior adviser for President Bush."

CNN's treatment of Begala and Carville offers a sound model for Fox News. Both Begala and Carville have donated to Clinton's presidential campaign and remain close friends and trusted confidants of the Clintons. Like Rove, neither is formally advising the Clinton campaign, although Carville sent out a fundraising e-mail in 2007.

"I have no role in her campaign, save as a donor and voter," confirmed Begala.

CNN executives initially resisted identifying their commentators' political ties, for which the network drew fire. "Would it kill CNN to disclose that James Carville is a partisan Clinton supporter when talking about the presidential race?" wrote DailyKos founder Markos Moulitsas.

Eventually, however, the network did some soul-searching and realized that its critics were right. While Begala and Carville were not on Clinton's payroll, they were "on the Hillary bandwagon, and that should be disclosed as much as we can," CNN president Jonathan Klein said. "I wasn't comfortable with it myself as I watched it." CNN now regularly identifies Begala and Carville as Clinton supporters and typically pairs them with an Obama supporter in conversation.

Fox almost never puts another talking head in with Rove, generally hosting him as a solo guest.

In 2004, it was Republicans who were raising conflict-of-interest complaints. "It seems highly irregular that CNN would tolerate two employees' openly working and advising and appearing on behalf of the John Kerry for President campaign," Steve Schmidt, then a spokesman for President Bush's reelection effort, said of Begala and Carville, according to the New York Times. (At the time, the two CNN commentators were serving as unpaid advisors to John Kerry's campaign.)

Schmidt is now working for McCain's campaign. Not surprisingly, he has not voiced any complaints about Rove's arrangement with Fox News.

Another conservative indignant over Begala and Carville's dual roles in 2004 was Fox's opinion maker Bill O'Reilly. According to MSNBC's Dan Abrams, O'Reilly complained then that their arrangement was the "collapse of CNN's ethical standards." Furthermore, O'Reilly claimed, if he had "signed on with Bush-Cheney 2004," then "the media mob would have stormed the Fox castle."

Since Super Tuesday, Rove has appeared on "The O'Reilly Factor" 13 times. Not once has O'Reilly revealed his guest's relationship to the McCain campaign.

Despite Rove's undisclosed dual role, media critics have been quick to praise his performance as a Fox News analyst. Ten days after Rove's first appearance on the network, Slate's Troy Patterson announced that on-air, Rove offers "clarity, concision, humility, good humor, good posture and dispassionate analysis." In March, after Rove had made 15 appearances on Fox, the New York Times' David Carr said the pundit is "one of the best things on television right now." Carr called him "graceful, careful and generous," adding that he is unlike "the real Karl Rove."

But it may just be the real Karl Rove dressed up for broadcast. Take, for instance, his frequently misleading recitation of Obama's reaction to controversial statements by his former pastor, the Rev. Jeremiah Wright.

On March 13, ABC News published a 2003 video of Rev. Wright saying "God damn America" during a sermon. The network reported that earlier in the month -- before these comments had been revealed -- Obama had said, "I don't think my church is actually particularly controversial."

On at least five occasions, however, according to a Lexis-Nexis search, Rove has altered Obama's comment about his church to make it seem as though the senator was commenting specifically in response to Wright's comments as publicized by ABC. For instance, on the April 25 edition of "America's Election HQ" on Fox, Rove claimed that "on the 13th of March, [Obama] came out and said, 'There's nothing particularly controversial in Reverend Wright's statements.'"

Rove's distortion here is subtle, but in making it, he is able to imply that at one point Obama explicitly endorsed Wright's comments. In fact, Obama has said he was not present when the comments were made, and both denounced and rejected them once they became public.

Repeated attempts by Salon to contact a Fox News spokesperson about why the network refuses to identify Rove's ties to the McCain campaign brought no response. Inquiries to Rove directly also went unanswered.

Rove's conflict of interest is problematic now, but will become increasingly so in the general election. He will be commenting on McCain and his Democratic opponent, whom Rove will be working to help defeat. Still, the network has given no indication that it intends to start disclosing Rove's ties to the public at that time.

Amanda Terkel is managing editor of the blog ThinkProgress.org and deputy research director at the Center for American Progress Action Fund.

Matt Corley is Assistant Editor of the blog ThinkProgress.org at the Center for American Progress Action Fund.