Indiana Jones and the kingdom of fat kids

With childhood obesity at alarming rates, movie tie-ins to fast food are irresponsible. An open letter to George Lucas and Steven Spielberg. 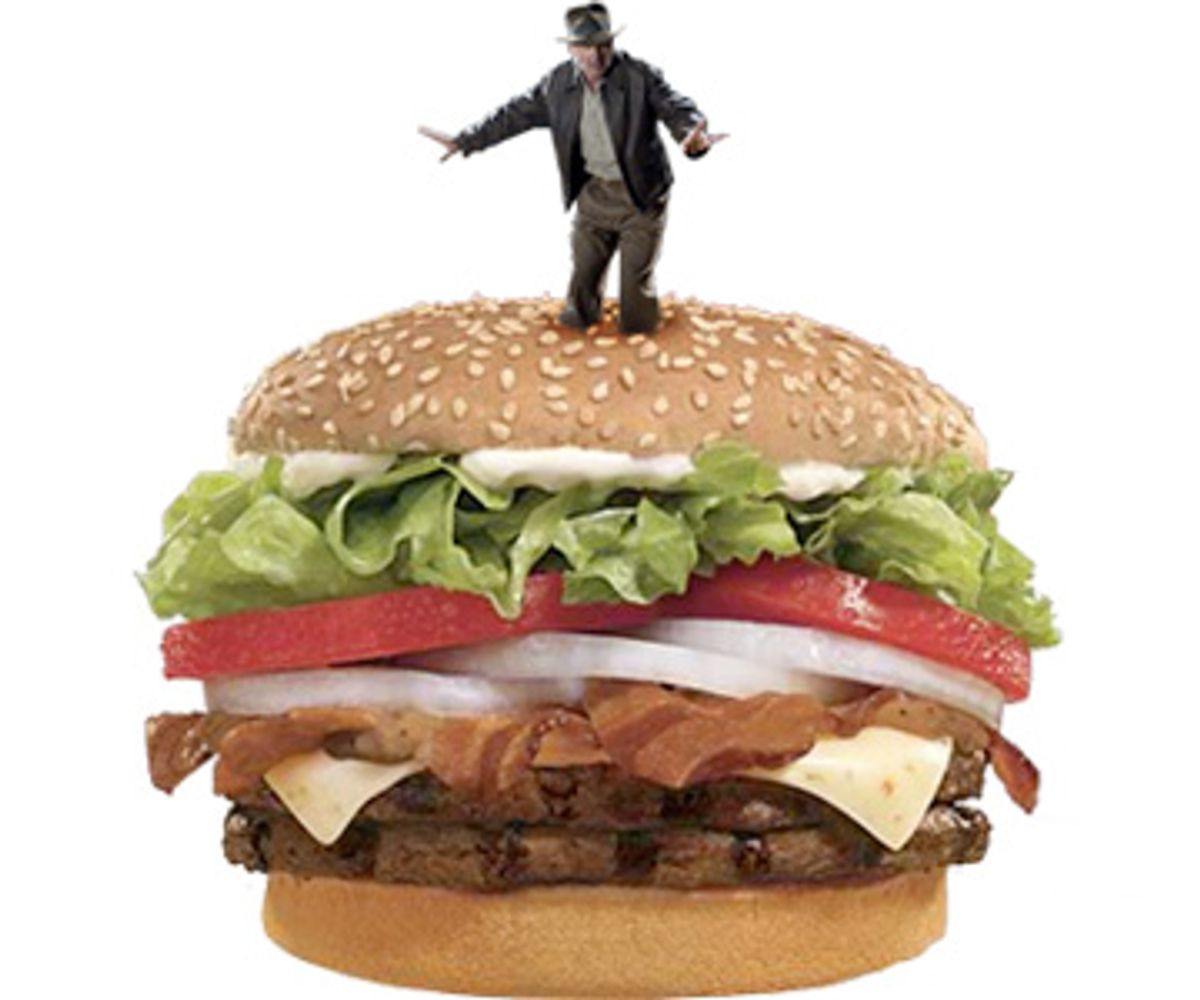 When I was a kid, your movies were a big part of my summers. So were all the goodies that came with them -- "Star Wars" action figures, Indiana Jones trading cards, Reese's Pieces (E.T.'s favorite candy). Somewhere in my parents' house, I think I've still got a box of treasures with all of those memories. Among them are souvenirs I picked up at Taco Bell and Burger King, like a "Return of the Jedi" soda glass with a portrait of the menacing Darth Vader painted on it.

A generation later, I still eagerly anticipate your movies. My friends and I lined up hours in advance to see "The Phantom Menace" in 1999, and I weaseled my way out of a family obligation with the in-laws so I could catch "Attack of the Clones" in 2002. A couple of weeks ago, I hopped online to check out the trailer for the new Indiana Jones movie, "Indiana Jones and the Kingdom of the Crystal Skull," and I'm looking forward to buying the first three films on DVD.

In the 30 years since you've started making movies, one thing that hasn't changed is a kid's (or in my case, a grown man's) imagination and wonder. And who sparks that better than you?

But a lot of other things about kids have changed. Their health is one of them. Today, almost one in four kids is obese, putting them at risk for, among other things, diabetes and cardiovascular disease. The epidemic of obesity is serious enough that we're predicting that this current generation won't live as long their parents and grandparents. That's incredible if you think about it.

Which brings me to why I wrote this letter. I'm a pediatrician, and every day I see overweight kids coming into my office. Getting families and kids to change how they eat is an uphill battle, and it doesn't get easier when big studios like yours wheel and deal with companies that peddle junk food and fast food.

You tied "Star Wars" to Pepsi and Frito-Lay, plastering Yoda and Obi-Wan over 2-liter bottles and Doritos bags. Recently I was watching CNBC and saw the chief marketing officer of Burger King unveil the Indy Whopper, a mammoth, juicy burger with pepper jack cheese and jalapeño sauce (to give it "adventure," the CMO pointed out), a tie-in to "Indiana Jones and the Kingdom of the Crystal Skull." I see you also got Mars to manufacture a Snicker's Adventure Bar with coconut and chai that has Dr. Jones' face on the wrapper.

Besides the fact that none of these foods is healthy, one has to ask if they're what your characters would eat. Would Lord Vader chug down a Pepsi before he wielded his light saber? (If he did, would he drink it with a straw or take off his entire mask?) Wouldn't Indy, now a senior citizen, have more than just a little bump in his cholesterol if he had scarfed down his namesake burger with fries and a soda? How could he be fit enough to chase down ancient relics while dodging boulders and outwitting Nazis?

You may think I'm playing the blame-the-media-and-Hollywood game. But an increasing body of medical evidence shows that child advertising and obesity are correlated. Take a look at a study by the Kaiser Family Foundation. According to the report, each week American kids spend a full-time job's worth of time in front of the TV, on the Web and playing video games. They will see about 40,000 ads per year, and two-thirds of those ads are for junk food and fast food. Studies show that what kids see on TV is what they tell their parents they want for supper. No doubt the Indy Double Whopper -- with bacon! -- will be flying off the greasy grill in short order.

It's not all the media's fault. Parents need to take charge of what foods they're buying and how they're preparing those foods. Many families, especially poor ones, get a whole lot for their hard-to-earn dollars when they buy cheap, processed and calorie-dense foods. Fresh fruits and vegetables are more expensive, don't last as long and take time to prepare -- time that's hard to find if both parents work full time to pay the bills. This gap between the waistlines of the rich, middle class and poor is only going to get worse with rising food prices. It's also a crime that many hospitals, like shopping malls, now contain a McDonald's, where patients with Type 2 diabetes, cancer and other serious illnesses can gorge on fast food before and after they get treated for those very diseases.

So I'm asking you: Why do you still tie in your movies with junk food and fast food? I know that you and your corporate partners make millions from deals with conglomerate food companies and fast-food chains. But do you really need the extra cash at this point? Wouldn't it be better, in a corporate crusader kind of way, to change course? Stop these deals, or partner with somebody who thinks a little healthier?

I don't want to single out just movies. There's a ton of companies that use characters and celebrities to peddle junk food. Check out this summary from the Center for Science in the Public Interest. Being a sports fan, my favorite is the one about Jason Giambi, who endorsed Pepsi by saying that drinking several a day really "lifts him up." (Actually, I think it's safe to say that it was more than Pepsi that lifted Jason's batting average during the 1990s.)

On the other hand, you are two of the most powerful and influential people in the media today. Mr. Lucas, you've even been called the forefather of the movie tie-in. So if you change, and do so publicly, others may well follow suit. About two years ago, Disney backed out of its long-term partnership with McDonald's in part because of the issue of childhood obesity. Would you both be willing to do the same?

If not, then perhaps a little truth in advertising, or in cinema, is in order. You should show us how your characters would look if they ate the food that you helped peddle. In that vein, you got Jabba the Hutt right. But Princess Leia in her skimpy steel bikini with cellulite? Indiana Jones having to hit the brakes during a car chase and find a glass of water so he can take his Lipitor? Now that I think about it, wouldn't Viagra have been the best tie-in for the new movie?

Humor aside, I ask you to consider the reality of childhood obesity. It's a serious problem; it needs serious solutions. Doing your part would help more than you might imagine.