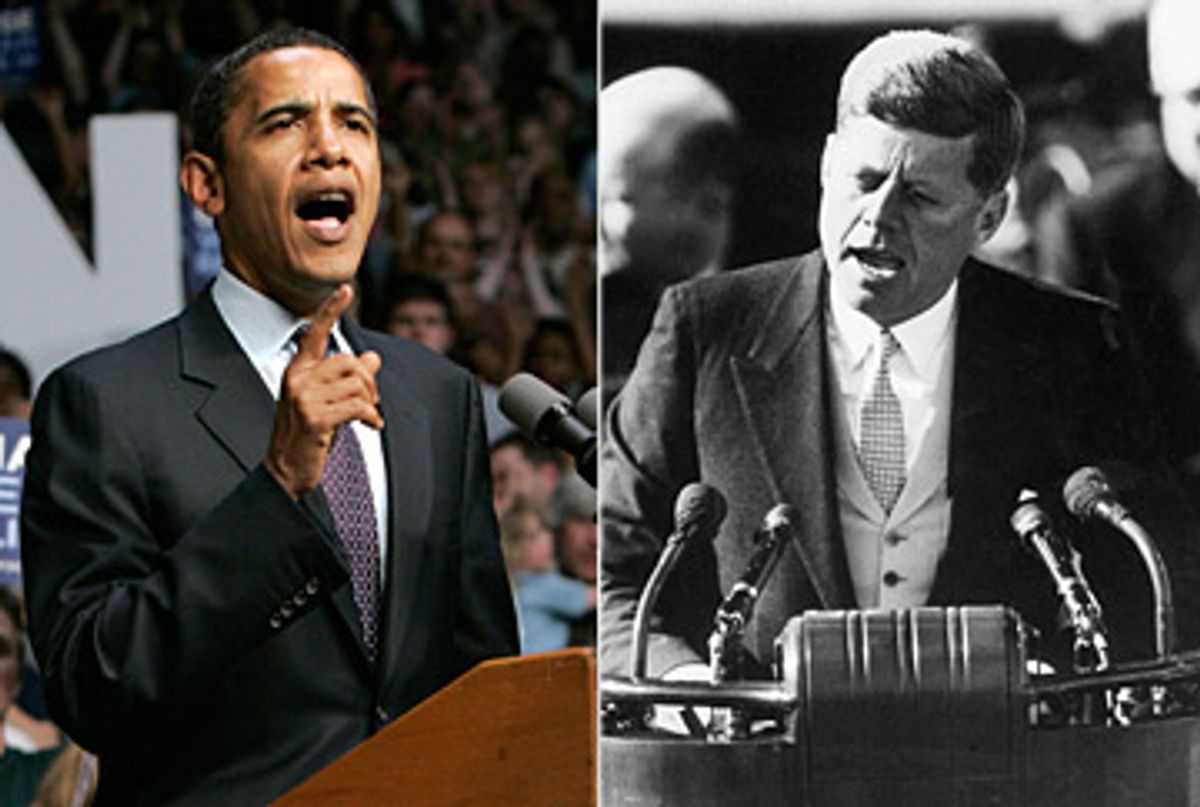 That was driven home again this week when the Obama and McCain campaigns squared off over the question of whether the United States should negotiate with its enemies. Obama said this kind of diplomacy is a sign of strength. "Strong countries and strong presidents talk to their adversaries," the Democratic candidate told a rally in Oregon on Monday.

To McCain, however, this kind of talk demonstrates Obama's naiveté and "reckless judgment." Bush himself jump-started the latest round in this fracas, suggesting that Obama's calls for diplomatic engagement amounted to "appeasement" of the forces of terror.

Is talking with our enemies a sign of strong and intelligent -- or weak and deluded -- leadership? This debate is shaping up as one of the major themes of the 2008 campaign -- just as it was in the 1964 presidential race before JFK was shot down in Dallas in November 1963.

Obama clearly understands this historical parallel and has often invoked JFK's inaugural address to support his calls for diplomacy, reminding Americans that Kennedy said we should "never negotiate out of fear, but ... never fear to negotiate." This was a controversial idea during the deep chill of the Cold War -- after years of bellicose propaganda that demonized Communist leaders as evil and untrustworthy foes who only understood force. And it is equally controversial idea today, after the Bush-Cheney regime's endless war on terror.

By 1963, John Kennedy had developed the courage and vision to directly challenge the Cold War -- the state of permanent fear and tension that had nearly led to the end of the world in the Cuban Missile Crisis. Kennedy knew that his opponent in his upcoming re-election campaign would likely be champion of the rising right, Senator Barry Goldwater, and he knew the battle lines between them on questions of war and peace would be starkly drawn. JFK predicted, in fact, that peace would become the major theme of the 1964 race.

Goldwater -- who was idolized by a future senator from Arizona, John McCain -- saw the Cold War world through the eyes of the Pentagon commanders who were constantly clashing with President Kennedy during his presidency. Like these military chiefs, Goldwater thought war -- even nuclear war -- with the Soviet enemy was inevitable, and he characterized Kennedy's efforts at diplomacy as "weak" and "soft."

But JFK, who had seen and felt the horrors of war, was determined to avoid a nuclear holocaust. He told his defense secretary, Robert McNamara, that he wanted his epitaph to read, "He kept the peace."

Working with his poetic speechwriter, Ted Sorensen -- a young, Unitarian conscientious objector - Kennedy would craft the most eloquent pleas for world peace ever delivered by a modern president. (There's a neat, historical symmetry in the fact that Sorensen is now working for Obama.) The language of these speeches, which JFK delivered in the summer and fall of 1963, from American University to the Mormon Tabernacle -- and of the speech he was to deliver at the Dallas Trade Mart -- still has the power to shock and inspire.

Imagine a president who believed in talking with and even trading with our enemies, and rejected bluster and swagger? This was Kennedy, in a September 1963 speech before a conservative Mormon audience in Salt Lake City: "We must realize that foreign policy in the modern world does not lend itself to easy, simple black and white solutions. If we were to have diplomatic relations only with those countries whose principles we approve of, we would have relations with very few countries in a very short time ... If we were to treat foreign policy merely as a medium for delivering self-righteous sermons to supposedly inferior people, we would give up all thought of world influence or world leadership." The Utah audience greeted Kennedy's speech with a loud burst of sustained applause.

Imagine a president who acknowledged the common humanity of our enemies, and the right of their children to live in peace. That is what JFK did at American University in June 1963, when he said, "We all inhabit this small planet. We all breathe the same air. We all cherish our children's future. And we are all mortal."

And imagine a president with the fortitude to travel into enemy political territory, a Dallas seething with anti-Kennedy resentments, to deliver this speech: Americans must stop listening to the voices of "nonsense" that blared "peace is a sign of weakness." The most effective way to show our strength was not by strutting belligerently around the globe -- it was to live up to our democratic principles, "practicing what (we) preach about equal rights and social justice."

We will never know how his Dallas audience would have responded to these provocative remarks, because Kennedy was cut down in his limousine on the way to deliver this speech.

But in a strong sense, Barack Obama has resumed delivering this message to America, about who we are and who we must be to reclaim a place of respect in the world. The 2008 presidential race is turning into the debate over war and peace that President Kennedy and Senator Goldwater never got to hold.

A 71-year-old former military man is clearly not the leader America needs at this moment in its history. We need a leader who recognizes "that the United States is neither omnipotent or omniscient, that we cannot impose our will upon the other 94 percent of mankind, that we cannot right every wrong or reverse each adversity, and that therefore there cannot be an American solution to every world problem." A president who understands that "equating negotiations with appeasement and substituting rigidity for firmness" is "the pathway to war."

This was President John F. Kennedy. And it could be President Barack Obama.