The senator's indictment of the Democratic Party is just as dishonest as his failure to discuss his own evolution as an ally of McCain's. 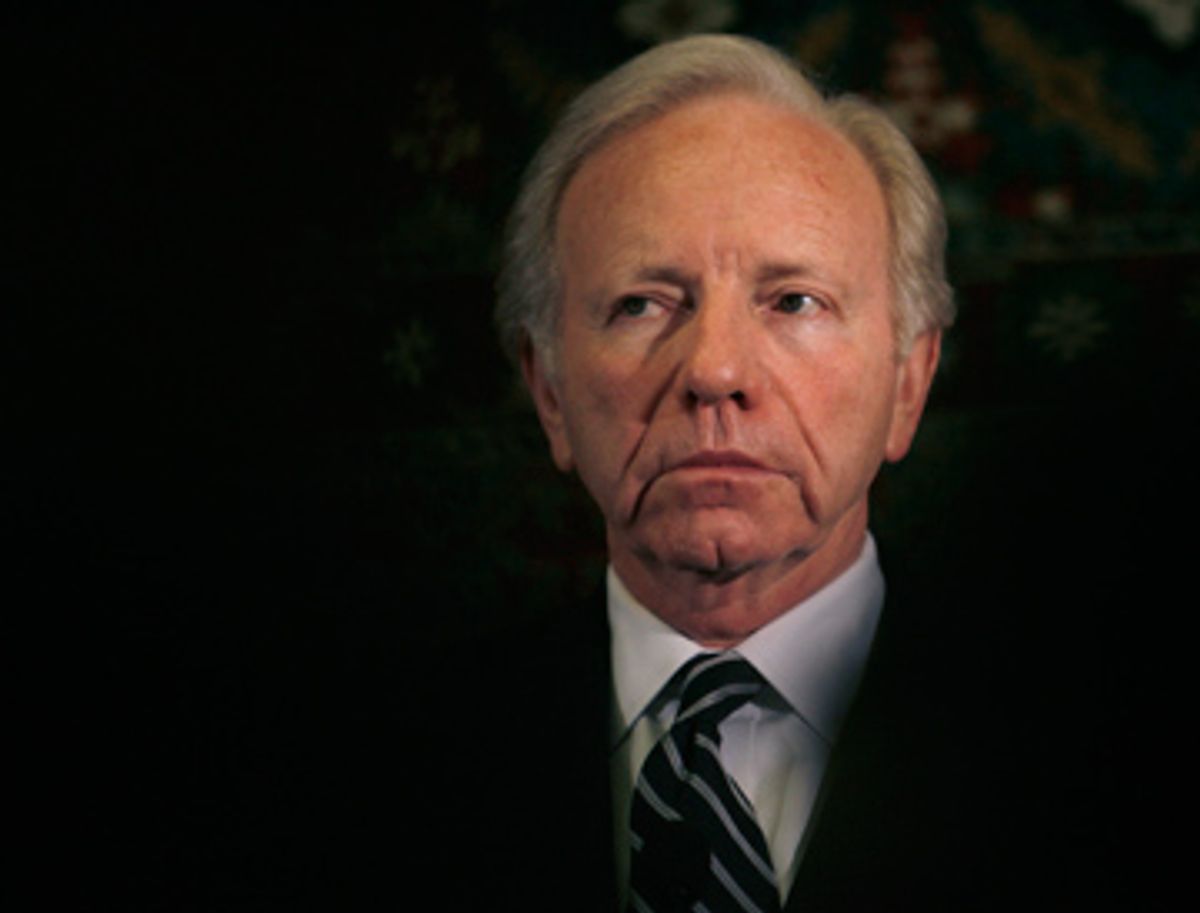 Despite his boundless pretensions, Sen. Joe Lieberman is not and has never been a font of foreign policy wisdom. His opinions derive as much from expedience and vanity as any consistent worldview. He will say whatever serves his ambitions at a given moment.

Running against antiwar Democrat Ned Lamont almost two years ago, for instance, he promised Connecticut voters that we were on the cusp of victory in Iraq. "I am confident that the situation is improving enough on the ground that by the end of this year, we will begin to draw down significant numbers of American troops," he said in October 2006, "and by the end of the next year more than half of the troops who are there now will be home." Within weeks after winning that election, of course, Lieberman was joining with Sen. John McCain, his friend and ideological ally, in support of sending 30,000 additional American troops to Iraq -- and bringing exactly none home.

Was he lying when he offered that false but comforting assurance in the heat of a Senate campaign? Was he simply unable to distinguish between reality and his own propaganda? A similar set of questions confronted readers of a Lieberman essay on foreign policy and the Democrats that appeared Wednesday in the Wall Street Journal, where we can expect the "independent Democrat" to appear often during the coming months as a turncoat surrogate for McCain -- because today he evidently hopes for appointment as a token Democrat in a Republican Cabinet, or even a second nomination as vice president, on the Republican ticket.

Lieberman's theme in the Journal essay, excerpted from a speech he delivered at an event sponsored by Commentary magazine, the leading neoconservative journal, is easily summarized and utterly unoriginal: Democrats were once patriotic and strong on defense, when Harry Truman and John F. Kennedy led the party, but they have lapsed (again) into weakness and vacillation during the Bush era. And Lieberman pillories Barack Obama for suggesting that he would sit down and talk with the leaders of Iran and other adversarial regimes and for failing to stand up to the party's overbearing liberal wing.

For someone who once considered himself a history scholar, Lieberman shamelessly falsifies not only the diplomacy of past and current administrations but also, by omission, his own political pedigree. His Journal essay opens with a lament about the condition of the Democratic Party and an idealized glance back at the "principled, internationalist, strong and successful" foreign policy of Roosevelt, Kennedy and Truman.

"This was the Democratic Party that I grew up in -- a party that was unhesitatingly and proudly pro-American, a party that was unafraid to make moral judgments about the world beyond our borders," he writes. "It was a party that understood that either the American people stood united with free nations and freedom fighters against the forces of totalitarianism, or … we would fall divided." (The nuances of Roosevelt's alliance with Stalin and Kennedy's missile deal with Khrushchev escape Holy Joe, but then nuance always does.)

"This worldview," he continues, "began to come apart in the late 1960s, around the war in Vietnam. In its place, a very different view of the world took root in the Democratic Party. Rather than seeing the Cold War as an ideological contest between the free nations of the West and the repressive regimes of the communist world, this rival political philosophy saw America as the aggressor -- a morally bankrupt, imperialist power whose militarism and 'inordinate fear of communism' represented the real threat to world peace."

Which Democrats does Lieberman think represented this dubious worldview? Was it George McGovern, decorated veteran of World War II? Was it Jimmy Carter, the former Navy submarine officer who stood against the Soviet invasion of Afghanistan? Or was this ideological changeling in fact Lieberman himself, now projecting his own former views onto the party he has abandoned?

It's a fair question to anyone who remembers Lieberman's debut in public life, which he would apparently prefer to forget. During the turmoil over the Vietnam War, a disastrous venture that Lieberman mentions only in passing, he became a leading peace activist in his home state -- a political stance that happened to comport nicely with his own ambitions at the time. He was a founding member of the dissident, antiwar Caucus of Connecticut Democrats, which supported the Rev. Joe Duffey's liberal primary challenge in 1970 against conservative Democratic incumbent Sen. Thomas Dodd, a Vietnam hawk. The young Lieberman, who had escaped the Vietnam draft with student and family deferments between 1961 and 1967, ran and won a seat in the state Senate that same year as a dovish liberal.

Many politicians who once opposed the war in Vietnam (or avoided military service) later adopted neoconservative positions when that became more fashionable. But Lieberman went considerably further in 1970, when he also happened to publish his now-forgotten first book -- an excursion into Cold War history titled "The Scorpion and the Tarantula." Ironically enough, that obscure tome was dug up and excoriated eight years ago on the Wall Street Journal Op-Ed page, when the Republican operatives who control that paper's editorial pages wanted to smear Lieberman, then running for vice president with Al Gore, as weak and unreliable.

Reviewer Ira Stoll, who now edits the right-wing New York Sun, described Lieberman's book as a "masterpiece of moral equivalency," which contended that Cold War tension between the United States and the Soviet Union was not "a case of the wicked against the virtuous," but a sad story of rivals caught in an "irreducible dilemma." Back then Lieberman saw the failures of arms control resulting as much from American and Soviet paranoia as from any ideological conflict. "One of the primary causes of the failure to achieve international atomic control and the concurrent failure to prevent the cold war was the inability of America's statesmen and people to see through the avalanche of Communist rhetoric and deal with Soviet foreign policy as something shaped by Russia's unique history and guided by the Russians' conception of their national interest," the young Lieberman wrote. "In this more accurate light, Russia's goals are seen to be more limited and less in conflict with America's."

Those sentences sound naive now, even to those of us who believe that neither side in the Cold War represented pure good or evil -- and who think that every president, from Kennedy to Reagan, achieved his finest hour by seeking to reduce nuclear proliferation and avoid the catastrophe of war.

The Democrats have struggled over foreign policy since Vietnam, although Lieberman's indictment of a party that abandoned the president after 9/11 is just as dishonest as his failure to discuss his own evolution. Democrats stood in lock step with Bush when he invaded Afghanistan, and only began to break with him over Iraq, a ruinous war that was based on lies.

As for his complaint against Obama's willingness to engage with various dictators and despots, let's not forget that American leaders have done so whenever that suited their objectives -- whether secretly, as Ronald Reagan did with Iran, or openly, as George W. Bush has done with Kim Jong Il and Moammar Gadhafi.

But speaking of appeasement, nobody in this debate, including Obama, has ever praised Louis Farrakhan as unctuously as Lieberman did in 2000. Back then, when he was trying to win black votes, he said he looked forward to sitting down with the Nation of Islam leader -- and he set no conditions for that meeting.