Irony alert! But does this prove LifeLock's a scam? 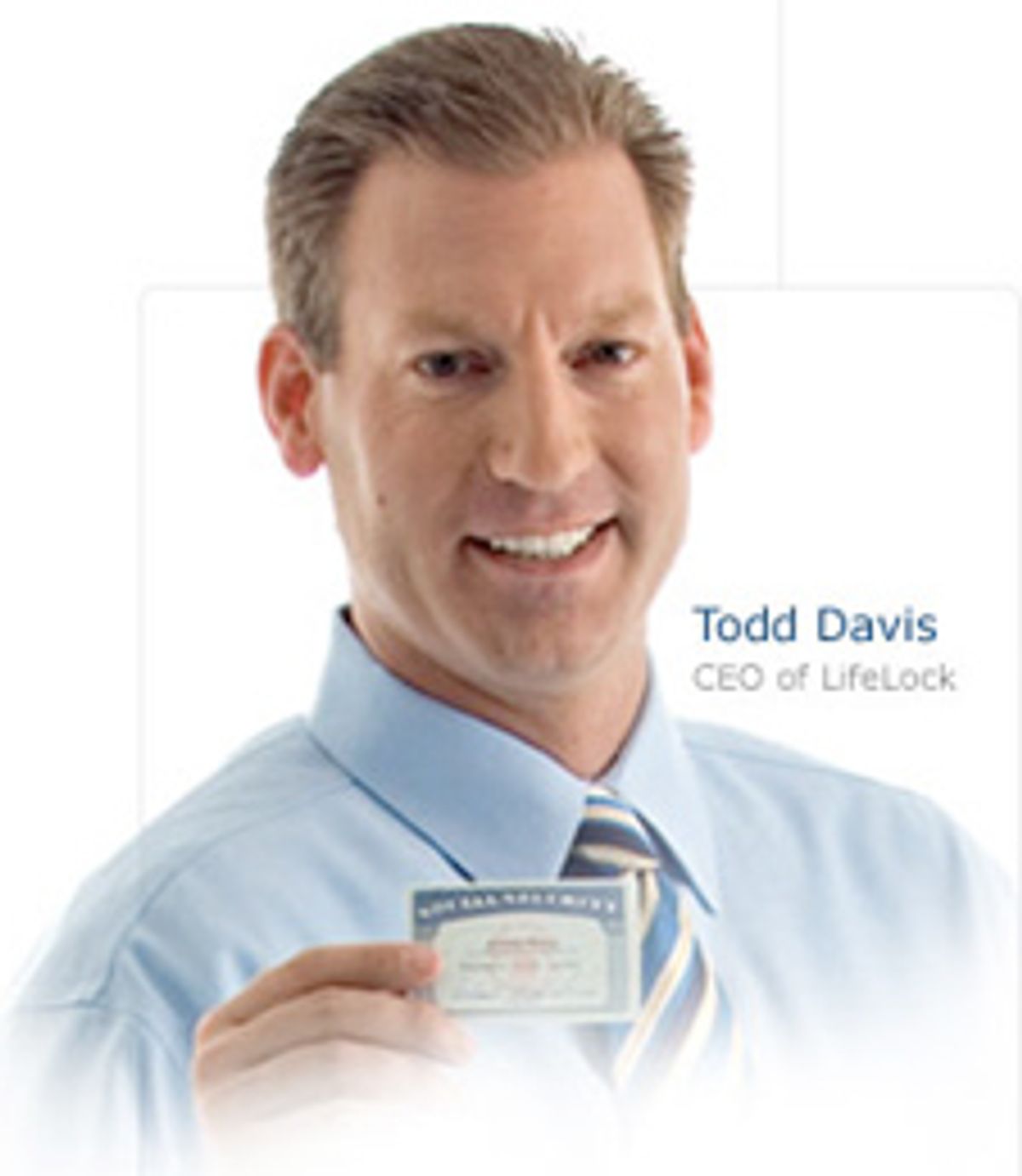 Todd Davis, the CEO of LifeLock, one of a slate of venture capital-backed start-ups that aim to protect you against identity theft, is fond of sharing.

For two years, LifeLock has run ads on TV, radio, newspapers, and billboards that broadcast Davis's most intimate details.

This was a kind of advertising bravado. LifeLock claims to safeguard your I.D. by setting up a series of alerts to let you know when, among other things, someone applies for credit or a change of address with your info, or when your data appears on credit-card trading sites.

The company acknowledges that you can do much of this stuff for yourself, for free -- but for $10 a month, LifeLock takes care of the whole process for you. It also backs the service with a guarantee. If your I.D. is stolen, the company says it will pay to set things right:

Sounds good, yeah? Thing is, LifeLock faces lawsuits from customers in Maryland, West Virginia, and New Jersey who claim that the company's advertisements are false.

Another lawsuit filed in Arizona charges that the company's guarantee is bogus. To top it off, Experian, the credit-reporting agency, is suing LifeLock for deceptive practices, pointing out that the firm doesn't offer people any more than they can get for free from Experian itself.

As the primary exhibit of LifeLock's possible bogosity, the plaintiffs point to this inconvenient truth: After putting his SSN on the air, CEO Davis was himself defrauded. A man in Texas used Davis's numbers to obtain a $500 payday loan.

Davis acknowledges this irony. But on the "Today" show this morning -- see video below -- he argued that the attack only proves that his system works. Huh?

Yeah, the logic's tough to follow, but basically Davis's saying that if he hadn't been using LifeLock, he'd have been scammed for a lot more. After all, his I.D. is everywhere.

Well, but Matt Lauer countered, it seems that Davis has been scammed for more

"We went to our database and it appears that dozens of people are using your Social Security number -- including a guy named Joe Blow in Carson City, a man on 123 Fake St., and Jabba T. Hutt," Lauer pointed out.

But Davis explained that those instances prove LifeLock's for real. "Those are attempts -- those are some of the 87 people who tried to use my identity, and the system worked exactly the way it was supposed to. They were turned away. They were not able to turn it into money."

Davis stressed that his service does not guarantee that your I.D. won't be stolen. Rather, it aims to reduce the likelihood that your I.D. is stolen, and if it is, LifeLock promises to fix the problem.

Of over a million subscribers, Davis said, 105 of his customers have been defrauded. "They're some of our biggest advocates because we do fulfill that guarantee," he told Lauer.

Critics of LifeLock point out that it's got a shady history. Its founder, Robert Maynard, once spent a week in jail on fraud charges. He was not convicted, but he did resign from the company. Kleiner Perkins, one of Silicon Valley's most influential venture firms, says it was aware of Maynard's background when it funded the firm.

Consumer advocates are critical because the company is charging people for something that they say credit agencies should be doing for free, like automatically extending fraud alerts (currently, credit agencies make you renew your alerts every 90 days).

That seems a reasonable argument, but it's also a little misplaced. You can't blame LifeLock for credit agencies' shortcomings.

And if it's offering a valuable service now, why shouldn't folks take advantage of it? For more than a million people, apparently, $10 a month is a small price to pay to be free of I.D.-theft worries.

Correction: Due to a stupid error, I originally called Todd Davis Todd Bishop. He is not Bishop; he's Davis.