Trying new things has its costs, whether you're trading partners on CBS's "Swingtown" or trading lives on FX's "30 Days." 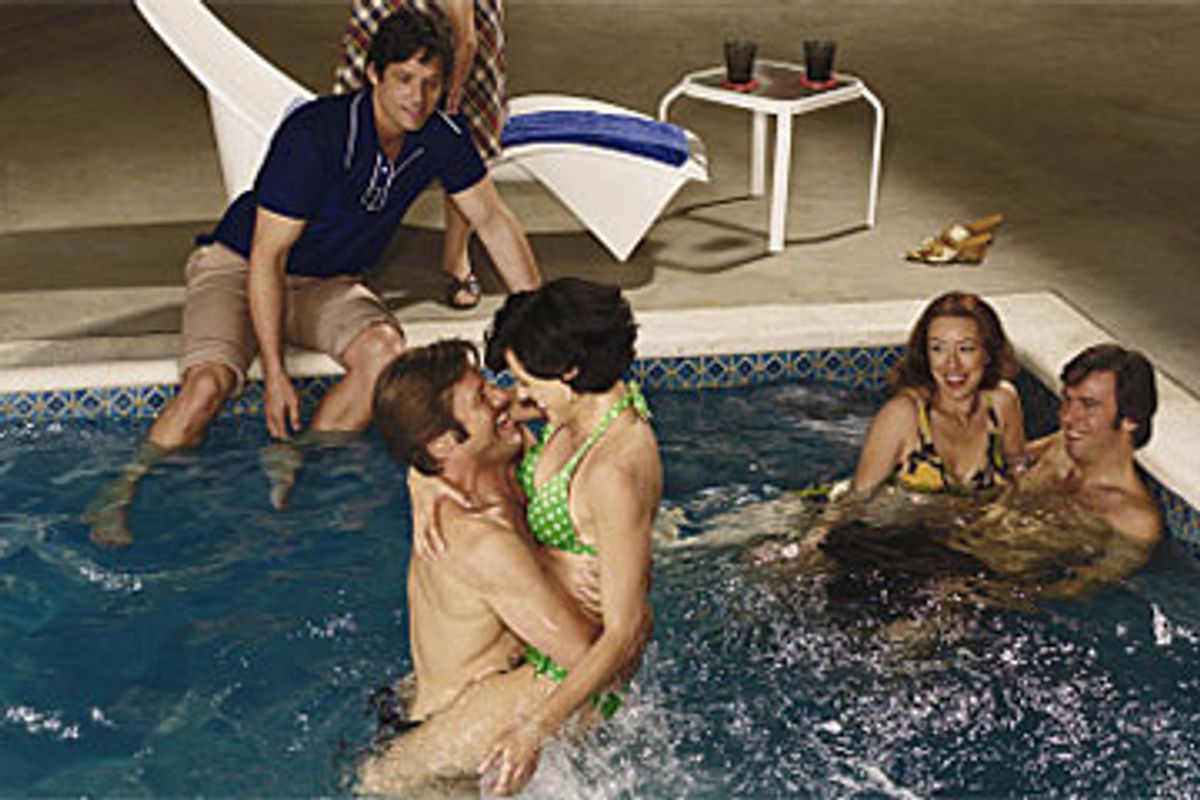 Trying new things is great, as long you have adequate insurance coverage. Eating new things can be fun, as long as you don't stumble on some deadly food allergy in the process. Traveling to new places can enlighten and invigorate you, as long as you don't pick up an exotic disease or get thrown into an overseas prison. Having sexual experiences with a new person can be exhilarating, as long as you stop in the heat of the passion to inquire about the person's sexual history, then ask to examine their supply of condoms so you can check the expiration date.

It's important to be spontaneous in life (it'll keep you young!) as long as you take the proper measures to beat every last remaining drop of spontaneity out of each new situation (it'll keep you alive!). This is the carpe diem paradox: You can seize the day all you want, as long as it doesn't involve risking your life or tapping into your retirement savings.

Maybe if we didn't need so much complicated paperwork and so many high-priced consultants just to live responsibly in this modern world, it would be possible to stop and smell the flowers. But to stop and breathe in the sweet scent of floral blooms without calculating the tax ramifications, the subsequent loss in income and the potential damage you'll incur to future earnings isn't just irresponsible -- it's downright reckless.

Nonetheless, once you've done the research and completed a thorough cost-benefit analysis and examined the rare (but extremely dangerous) risks involved and made sure that your insurance covers all the possibilities, thereby preventing any impact on the long-term well-being of either you or your family, then trying new things is awesome!

Swinging it
It wasn't always like this. Just look at the carefree married couples of "Swingtown" (premieres 10 p.m. Thursday, June 5), the drama that CBS hopes will take it from the geriatric realm of "Touched by an Angel" and "Ghostwhisperer" (aka "Touched by a Titty") to a hipper, younger, more impulsive universe where everyone has lots of disposable income to spend on luxury mid-size SUVs.

Yes, incredibly enough, throwing a show on the air that seems (at least on paper) like it's racy enough to belong on "Showtime" (aka the Bare Ass Channel) or HBO (aka the Full Frontal Channel) may be the best way to court rich young viewers. And make no mistake about it, in this challenging global economy, CBS cannot sustain itself on demographic undesirables who would still watch "Murder She Wrote" and "Matlock" reruns if they had the option.

Thus do we find ourselves among the '70s-sexy married couples of Chicago, highly attractive and successful men and women who would be tossing back pints of beer and flirting with bedheaded rocker boy-toys and whoring sea donkerellas if this were a few decades later. Instead, these couples started dating in high school, and many of them feel a little trapped, not so much in the Betty Friedan sort of way, more in the stash-a-dog-eared-copy-of-"The Hite Report"-in-your-nightstand sort of way. Susan Miller (Molly Parker), for example, feels a little winsome and wistful over the fact that her somewhat simple-minded husband, Bruce (Jack Davenport), thinks "foreplay" is some kind of an illegal forward pass in basketball. When she tries to talk about "wanting more" with her neighbor and best friend, Janet (Miriam Shor), Janet blurts out, "All these years, I had no idea you were so unsatisfied!"

But everything changes when Susan and Bruce (Best. Seventies. Names. Ever.) move to a more expensive neighborhood and across the street from Trina (Lana Parrilla) and Tom Decker (Grant Show), two sexy swingers who regularly lure single women and couples into their bed for making the love. Trina and Tom spot Susan and Bruce early on and resolve to get them in the sack pronto, despite Tom's assessment of the couple as something of a challenge.

Tom: A little bit straight and narrow. Might be kind of a tough sell.

Looking both boring and easy, Susan and Bruce show up at a party at Trina and Tom's house, cast a quick glance at the hip swingles in the mix, and are immediately glad that they tried something new for a change. When Tom starts rubbing Susan's shoulders and Trina beckons them both to bed, the couple exchanges a look that says, "Hey, it's not like it's going to be the '70s forever" and follows them into the bedroom. Sadly, though, we viewers at home, don't follow them into the bedroom. Instead, we come to our senses and realize that this is CBS -- which is a little like interrupting your make-out session to hear the harrowing epic tale of your potential partner's sexual history.

Meanwhile, neighbor Janet, who has never owned a copy of "The Hite Report" in her life, wanders into Trina and Tom's groovy basement and discovers a writhing mass of naked bodies (although, this being the Touched By An Imaginary Titty Channel, all we see is one man's face). Janet freaks out and insists on leaving the party, much to her husband Roger's chagrin.

Let's see, what else? Susan's teenage daughter has a crush on her sexy teacher, Susan's son has a crush on the girl next door whose mom appears to be a wanton coke whore, there's another nostalgic '70s hit song every few seconds ("Love, love will keep us together!"), and people actually say things like, "Who's up for a Harvey Wallbanger?" Basically, the whole thing is stylish and '70s-sexy but also shallow enough to feel like a less funny, hollowed-out combination of "The Wonder Years" and "Boogie Nights" -- which is exactly what the show's creators told the New York Times they were aiming for (without using the words "less funny" and "hollowed-out" of course). Every story line seems to lead down the same sexy, sexy sex path, but the carefully drawn characters and overriding sense of foreboding of, say, "Mad Men" are clearly missing from this picture.

Whether or not "Swingtown" will move past its easy-breezy-"Desperate Housewives" zaniness and "Ooo, family life is hard!" Judy Blume tone, at least it should prove unsettling to the "Murder She Wrote" crowd. Personally, I think this show needs both a little more darkness and more of a sense of humor. Take out some of the "Wonder Years" and throw in more "Dazed and Confused." Then we can really reminisce about the good old irresponsible '70s, when packs of unvaccinated dogs roamed the neighborhoods along with packs of long-haired hippie kids, who spent most of their time getting high and bashing in mailboxes with baseball bats. Those were the days!

Supersize-mologist
Thankfully, today we live within the safe confines of the unspontaneous, fear-addled new millennium, so we know that we should always look into potential tax liabilities before we leap. I guess this is what lends an unpredictable edge to Morgan Spurlock's docu-reality series "30 Days," which returns for its third season next week (10 p.m. Tuesday, June 3, on FX). With each episode, we watch someone try something new and completely unfamiliar as the cameras roll. Nine times out of 10, the experience is at once frustrating, informative and touching.

Spurlock starts things off by working in a coal mine for 30 days, an experience that, even for Spurlock, who grew up in West Virginia, is utterly unfamiliar and bewildering. As he rides more than a mile into the mine and the ceilings get lower and lower and the world becomes pitch black, it's tough not to feel sorry for him. Eating Big Macs for a month is one thing, but testing the bounds of your own sanity and claustrophobia is another.

Although Spurlock's observations are sometimes a little simplistic, he's openhearted and always finds ways to connect with the new people he meets. The coal miners he meets seem suspicious of him at first, but eventually they open up to him. "All you need to be a coal miner is a weak mind and a strong back," one fellow worker tells him.

This season of "30 Days" consists of only six episodes, but each one is worth watching for different reasons. The episode that focuses on a traditional mom who lives with a gay couple with four adopted kids is a little frustrating, because unlike Spurlock, the woman is neither all that insightful nor all that flexible. She's defensive, humorless, judgmental, and does a pretty bad job of connecting with her host family -- not the best choice for that particular challenge, in the end.

Of course, it would be easy enough to throw an open-minded, neutral person into these situations, but don't forget the words of Trina Decker: Easy is boring! The show's producers choose a former pro football player to sit in a wheelchair for a month because they know he'll have a particularly difficult time with it. And when they send a gun control advocate to live with a man and his son who are both armed to the teeth, they know it's going to get emotional and strained. But this isn't "Wife Swap" -- when the woman tries to go skeet shooting, but breaks down and cries instead over her murdered friend (a therapist who was shot by her patient), and her gun-loving host mumbles that they're just shooting at clay pigeons? At that moment, we're pulled into the very heart of the gun control debate in this country.

But my favorite episode is the last one, in which Spurlock lives on an Indian Reservation in the Navajo Nation for a month. This may be the least dramatic of all of the experiences portrayed on the show this season, but Spurlock offers such a thorough and heartfelt peek at Native American culture that the episode is unforgettable. Even on the reservation, Spurlock is respectful without pandering, curious without fawning unnecessarily. Conditions on the reservation are rough and there are plenty of problems among the population there, but he discovers a closeness among the family members and a shared connection to the land that he senses is missing from urban life. When he (somewhat tearily) leaves his host family at last, he seems genuinely worried about how he'll continue to foster that connection to a more simple, present existence when he returns to his regular life.