The forgotten kid of Guant

A teenager captured in Afghanistan and shipped to the U.S. prison remained unknown to the world for five years. Now he's being tried as an adult. 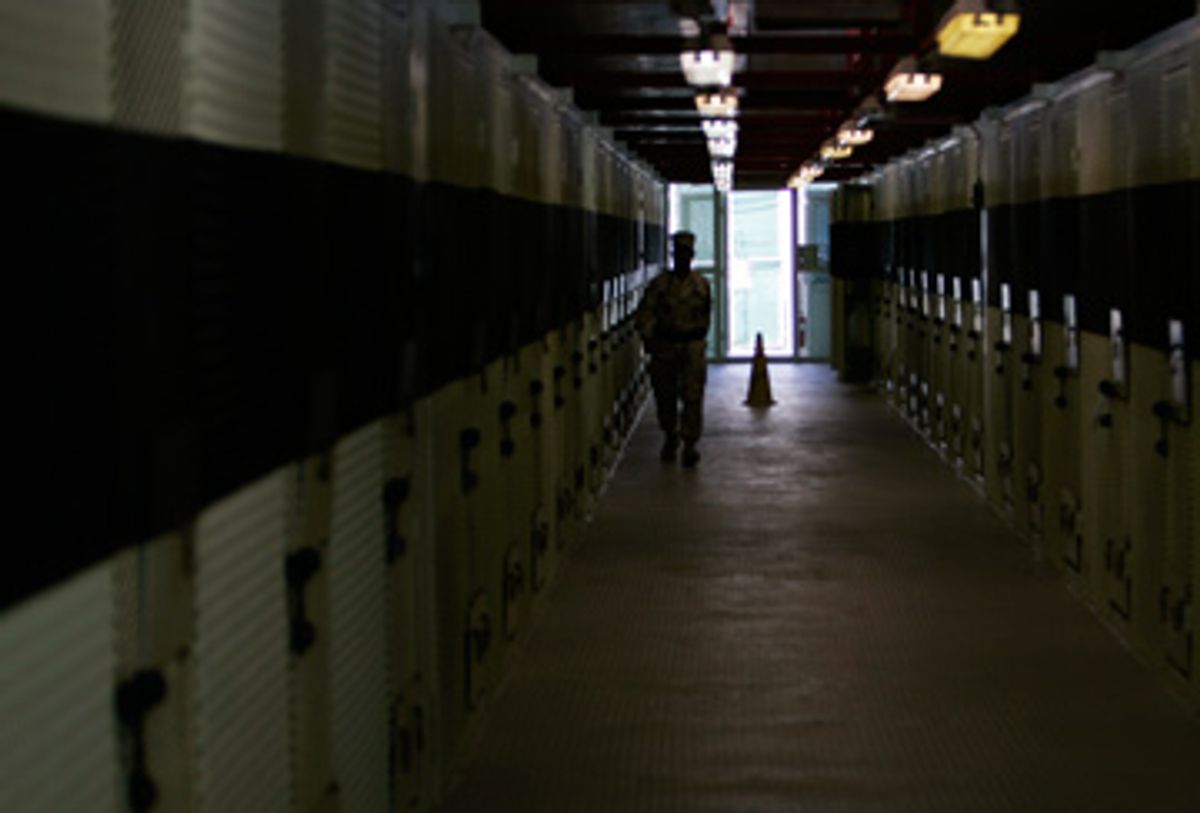 When Mohammed Jawad, a 23-year-old Afghan detainee, was summoned to appear before the military commissions at Guantánamo Bay for his arraignment in March, he told his military handlers that he would not go. After being held for more than five years here, he didn't believe he could get a fair hearing from the U.S. military.

But appearing at arraignments at Guantánamo is mandatory, so as has been done with others, military personnel forcefully extracted Jawad from his cell and brought him to court in shackles. Sitting before the judge in his orange jumpsuit, the color reserved for uncooperative detainees, Jawad buried his face into his hands and announced that he would boycott future proceedings -- a right the commissions allow.

So this month, when Jawad was scheduled to appear at the courthouse for another pre-trial hearing, nobody expected him to show up. But as a cluster of journalists, observers from nongovernmental organizations (including me, as a representative of Human Rights Watch) and military personnel gathered in the courtroom, Jawad, now dressed in khaki, a color reserved for more cooperative detainees, was escorted inside by two guards and quietly took a seat beside his defense counsel and an interpreter. Although he appeared uneasy and nervous, he was markedly calmer than at his arraignment.

Jawad put on the headset that would allow him to listen to a translation of court proceedings (something he refused to do during his March hearing) and politely asked the military judge, Col. Peter Brownback, if he could turn around to look at the audience in the courtroom. The judge agreed, and Jawad turned around to face us, revealing a wispy beard that only partly covers his post-adolescent acne.

The U.S. government claims that Mohammed Jawad is an unlawful enemy combatant who tried to murder two U.S. soldiers and their translator in Afghanistan by tossing a grenade into their vehicle in December 2002.

But Maj. David Frakt, his military-appointed attorney, argues that Jawad -- who was a teenager of 16 or 17 at the time of his alleged offense (Jawad doesn't know his birth date) -- is a victim. He says Jawad was a homeless teenager who was drugged and forced to fight with Afghan militia, then abused by the United States, which transported him halfway around the world and imprisoned him at Guantánamo for five years without charge and is now using him as a guinea pig to test a new system of military justice with no regard to his initial status as a juvenile.

When Frakt arrived at Guantánamo to meet Jawad, he said he found a profoundly disturbed young man who was reluctant to talk. "Jawad is in an extremely fragile mental state," Frakt said in an interview following the hearing. "He has been here for so long -- he has essentially grown up in Guantánamo. He has lost track of time, lost touch with reality, and suffers from severe depression. And he doesn't believe he can get justice from the military commissions."

Both U.S. and international law requires governments to provide children with special safeguards and care that take into account their vulnerability and culpability as children. They are supposed to be housed separately from adults, allowed to contact family members, provided with educational opportunities, and given prompt legal assistance.

The United States has acknowledged holding eight teenagers at Guantánamo, but although some of them were given special housing and educational opportunities and were eventually released, the U.S. has ignored Jawad's status as a juvenile.

Jawad's decision to attend commission hearings this month appears to owe much to his newly appointed military defense counsel, Maj. Frakt, a law professor in the Air Force Reserves who was called up from Western State University in California to represent the young detainee (now 22 or 23) just a few days earlier. (Jawad's previous defense counsel left after his reserve duty ended in late March.) With the help of an Afghan interpreter -- an elderly man from the same tribe as Jawad who managed to establish a rapport with the detainee -- Frakt was able to persuade Jawad to appear before the court so that he can "challenge the legality and legitimacy of the military commissions" and possibly argue for an improvement in the conditions in which Jawad is being held.

Jawad is not the only detainee at Guantánamo to be charged before the military commissions for an offense allegedly committed as a juvenile. Omar Khadr, a Canadian charged with throwing a hand grenade that killed a U.S. soldier, was 15 at the time of his alleged crime. Khadr's story has made headlines in newspapers and magazines around the world. He is even the subject of a new book, "Guantanamo's Child: The Untold Story of Omar Khadr," by Michelle Shephard. Lawyers in Canada have sued the Canadian government for access to documents on his case, and child rights groups have embraced his cause.

But Jawad is an illiterate Afghan from a poor Pashtun family with no ties to the Afghan government. According to Frakt, Jawad's father died during the Soviet occupation of Afghanistan. His mother remarried, and the family fled to Pakistan. Jawad spent his childhood years in a refugee camp and was educated at a local madrassa where all the teaching is conducted orally. He never learned to read or write.

Frakt says that when Jawad was 13, his family kicked him out and told him he needed to find a job. He spent much of those years hanging around a mosque looking for work. Sometime in 2002, Jawad was told he could have a job helping eradicate land mines in Afghanistan, so he returned to his native country. Once he arrived, however, Frakt says he was recruited by the local militia, drugged and forced into combat. Soon after, he was arrested by the Afghan police and handed over to the Americans.

Unlike most of the detainees at Guantánamo, Jawad was never provided a "habeas counsel," that is, a civilian lawyer to file a petition of habeas corpus on his behalf. Until he was charged this year, he was virtually unknown to the world.

Frakt said that his meetings with Jawad have been difficult, in part because Jawad doesn't understand the legal process, and in part because Jawad doesn't trust anyone in a U.S. military uniform, which Frakt is obligated to wear when he visits his client. "It is difficult to establish a trusting relationship with a detainee who has suffered so much and been detained by the U.S. military for five years," Frakt said. "He has a natural distrust of me, and he is not sure that I am here to help him."

For now, Jawad has agreed to allow Frakt to represent him in a limited capacity -- to challenge the legality and legitimacy of the commissions. Frakt hopes he will be able to persuade his client to allow him to give Jawad a more complete representation in a case that points to crucial questions about American justice in the war on terror.

From the government's point of view, Jawad's is a seemingly straightforward case. The prosecution has located eyewitnesses who claim to have seen the Afghan teenager throw the grenade. In addition, it says it has a signed confession from Jawad.

But Frakt says the case isn't nearly as straightforward as the government alleges. He says that the prosecution chose to prosecute Jawad because it viewed his as a "sexy" case -- Jawad is a defendant with "blood on his hands," in the government's view, which is something the American public understands better than something more abstract, like charges of material support for terrorism.

While Frakt acknowledges that the prosecution has witnesses who saw his client throw the grenade, he says the defense has also located witnesses who say the teenager appeared to be drugged at the time. As for the confession, Frakt says it is in Farsi -- a language Jawad does not speak. And the "signature" on it is in the form of a thumbprint, because Jawad does not read or write.

Frakt hopes to be able to make these arguments on Jawad's behalf if or when the case goes to trial. In the meantime, Frakt says has serious reservations about Jawad's ability to aid in his defense because of his fragile mental state -- something that was evident when Jawad himself addressed the court this month.

When the judge asked Jawad if he would like to make a statement, the young man spoke for about 20 minutes, saying that he didn't understand why he was at Guantánamo and why he was being punished. As he described his ordeal -- of being flown from Afghanistan to Guantánamo, locked in a steel cage, moved from cell to cell in the middle of the night, and sometimes being kept in a cell that had bright lights on 24 hours a day -- he said he had lost track of time and couldn't remember when or for how long he was held in each camp. Sometimes he stopped to rub his head and seemed to forget what he was saying in mid-sentence.

When Jawad finished his statement, Frakt requested that his client be taken out of the maximum security facility where he is currently housed -- where he is confined to a windowless cell at least 22 hours a day -- and moved to a "quiet, restful place where he can rehabilitate." He also requested that Jawad be examined by a mental health professional.

The judge told Frakt to put the request in writing and said that he would consider it. But it remains unclear whether the judge at the military commissions has the authority to order military officials at the detention facility at Guantánamo to do anything.

The next hearings in Jawad's case are scheduled for June 24-25. Frakt is hoping Jawad will participate.