The late filmmaker was one of the last to believe in making good mainstream movies for grown-ups. He offered glimpses of what makes us human. 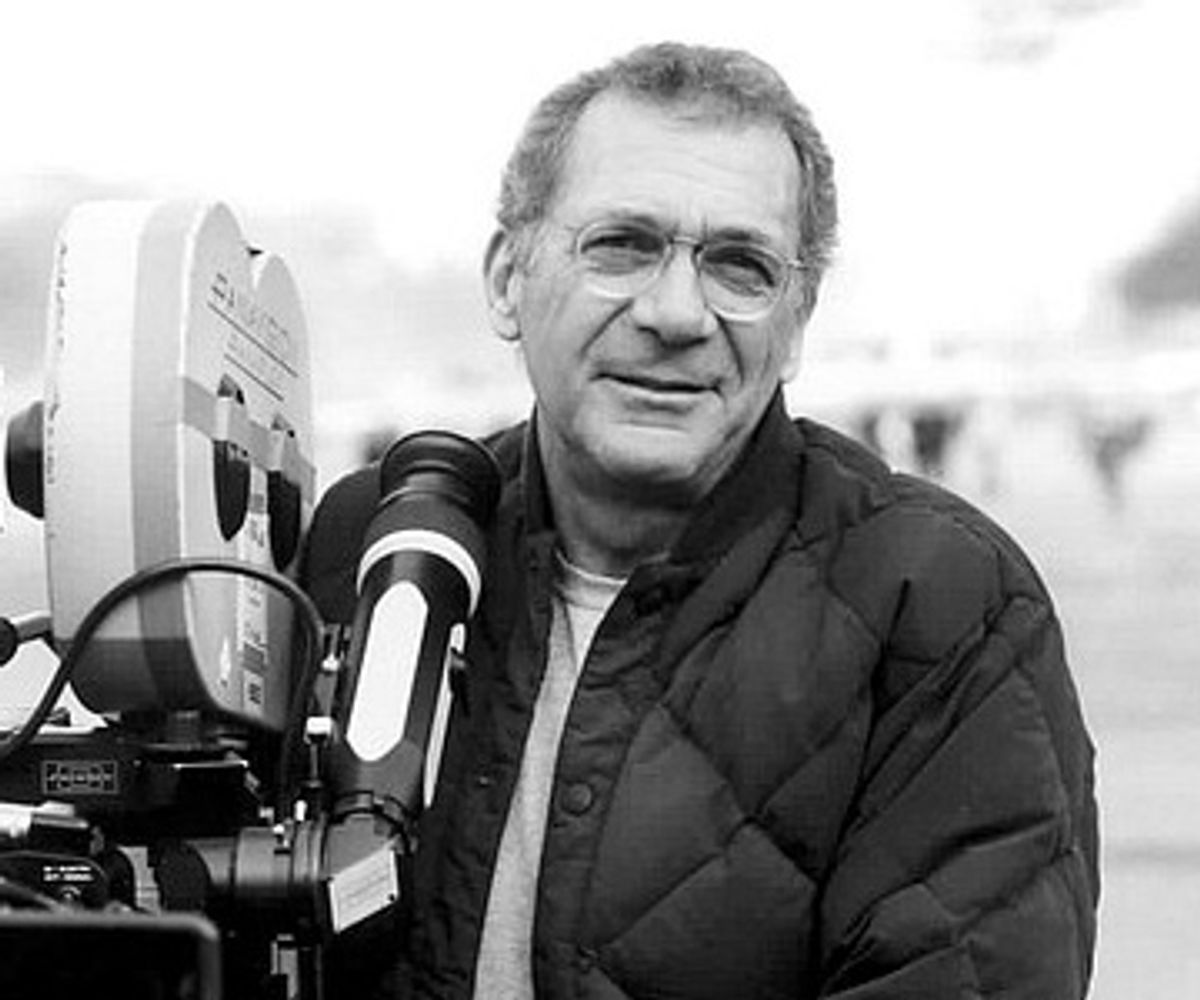 Director, actor and producer Sydney Pollack -- who died Monday, at age 73 -- made some terrific movies and some that were not so hot. But his death represents a loss the meaning of which isn't immediately apparent, at least not until you start fitting it into the context of what mainstream Hollywood filmmaking used to be, and what it has become.

Pollack was a filmmaker who believed, even past the time many others had given up, that you could make a good mainstream movie about a serious subject, and he believed -- right up to his last few fiction features, the highly imperfect but well-intentioned pictures "The Interpreter" (2005) and "Random Hearts" (1999) -- in making movies for grown-ups, pictures that at least attempted to tell adult stories. Even when it became not just unpopular but almost untenable to do so, he continued to put his faith in the strength of a script and the quality of his actors' performances.

But in the past 20 years or so, Pollack has been a strong presence in the movies even when he wasn't behind the camera. In recent years he's meant more to me as an actor than as a filmmaker, but that's in no way a denigration of his career: Even in a small role (and even in a bad movie) Pollack would often be the guiding spirit of a picture. He'd show up on-screen and, sometimes with just a single line of dialogue, become a flashpoint for everything that makes us human, a way of recognizing bits of ourselves even in a character who may -- we think -- be nothing like us. That's not a negligible contribution to the movies; it's representative of everything that keeps us going to the movies, period.

In the 1950s, Pollack (who was born in Lafayette, Ind., in 1934) studied under the great acting teacher Sanford Meisner at New York's Neighborhood Playhouse School of the Theater. Although he landed roles on television and on Broadway, he realized, as he would say in interviews later in his career, that he wasn't cut out to be a leading man. In the early '60s he began directing for television (his credits include episodes of "Ben Casey" and "The Alfred Hitchcock Hour"); in 1965, he made his first feature film, "The Slender Thread," with Sidney Poitier and Anne Bancroft, edging his way into a filmmaking career that would thrive throughout the '70s and '80s.

In 1985 Pollack made the hugely successful "Out of Africa," and won an Oscar for it. Among his finest pictures were the unsettling Depression-era drama "They Shoot Horses, Don't They?" (1969); "Tootsie" (1982), which set the standard for what modern romantic comedies could be; and the 1973 film "The Way We Were," which satisfied to an almost mystical degree every promise and desire ever instilled in us, the collective audience, by the tradition of the old Hollywood romance weeper. Appearing at the beginning of the '70s, just as so many filmmakers were delighting in breaking the old rules, the film was a reminder that conventions didn't have to be seen as conventional.

But even a picture like "The Firm" (1993), the kind of popular entertainment that doesn't necessarily hold up well for the ages, is worth reviewing just for the way Pollack allows the movie's range of astonishing performances -- from the likes of Holly Hunter, Gene Hackman, David Straitharn and Gary Busey -- to shine through. Even Tom Cruise, possibly the most impermeable, self-involved actor of the modern age, manages a reasonable approximation of believability.

It's true that good actors are often good regardless of the direction (or lack thereof) they get from a filmmaker. But you can usually tell when a director is driven by the impulse to bring out the best in everyone. Pollack had a way of orchestrating the performances in a movie as if he were a conductor placing each instrument to greatest advantage in a piece of music. He could often bring an actor's best qualities to the fore, and make his or her worst ones register as little more than background noise. Not all directors are good actors themselves, nor do they need to be. But Pollack had a way of turning his own intuitiveness as an actor into generosity toward others, the sort of alchemy that should never be taken for granted when you're talking about an industry filled with fat egos.

I didn't love every movie Sydney Pollack made, but I can't remember a single time I didn't feel a rush of joy at seeing him show up in a picture. I recall my pleasure, and my relief, at watching him in Woody Allen's otherwise dismally moralistic "Husbands and Wives," for the way his character defended his relationship with a young, bubble-headed aerobics instructor. Pollack played the character so that his behavior wasn't just your stock human foible -- a mistake that any old dumb, middle-aged guy might make -- but as a thread of a greater mystery, part of the terrifying bundle of impulses that none of us, man nor woman, can ever completely understand. His performance was a salve, a counterbalance to the movie's aggressive finger-wagging and its bile.

In Stanley Kubrick's "Eyes Wide Shut," Pollack should have been scarcely believable as a sleazy zillionaire who runs a sordid sex ring. But even though Pollack is an inherently warm presence in any movie, warmth isn't the same as likability, and his performance in "Eyes Wide Shut" reminds us of that: Pollack has always played people, not qualities (greed, lust, what have you), and even though you or I may not know what Pollack was really like as a human being, it's always been clear that he's found the key to each role deep inside himself: His performance in "Eyes Wide Shut" stings even more because it's Sydney Pollack up there: a man who ought to be considered a monster also has a face you can't help trusting.

The list of wonderful Pollack performances, including his turn as a crusty, seen-it-all lawyer in "Michael Clayton" (which he also produced), is too long to detail. He has often been marvelous in his own movies, including, of course, his performance in "Tootsie" as the agent who keeps the ego of Dustin Hoffman's title character in check. But I feel bereft knowing that he will never again pop up in some otherwise dismal picture, as he did most recently in "Made of Honor," as Patrick Dempsey's addicted-to-marriage dad. Pollack had crummy lines, including some dumb sex jokes, but the performance is ultimately so tender and so carefully shaped (despite the fact that it consists of only a few scenes) that, 10 years from now, I know it's the only thing I'll remember from the movie.

One of my favorite Pollack "movies," which also includes a Pollack performance, is the spot he did for Cingular that used to run in theaters before movie showings, reminding audience members to turn off their cellphones. In this miniature masterpiece, Pollack barges into a kitchen and interrupts the babbling phone conversation of a clueless kid. Pollack berates the guy for his "performance": How are we supposed to believe anything he's saying? He has no conviction, no energy, no soul. The spot is brilliant for the way it parallels the absurdity of a filmmaker directing real life with the annoyance of a ringing cellphone throwing us out of a movie. But the spot is wrenching for another reason that didn't occur to me until after I heard of Pollack's death: It underscores the fractured relationship between the old way, the Pollack way, of making movies (with care) and the new way of watching them (with one eye on your lit-up cellphone, in case your buddy happens to text you from a party or a bar).

Pollack, in his performances and in many of the movies he made or produced, always had faith in what movies, and the people in them, could be. His legacy, dropped in our laps at a time when mainstream filmmaking is in trouble if not in crisis, is a challenge to us not to lose faith. And, at the very least, to silence our cellphones and pay attention to what's in front of us.