How Rock Band saved my marriage

My husband's video game addiction was driving me crazy. Then we found an obsession we could share. 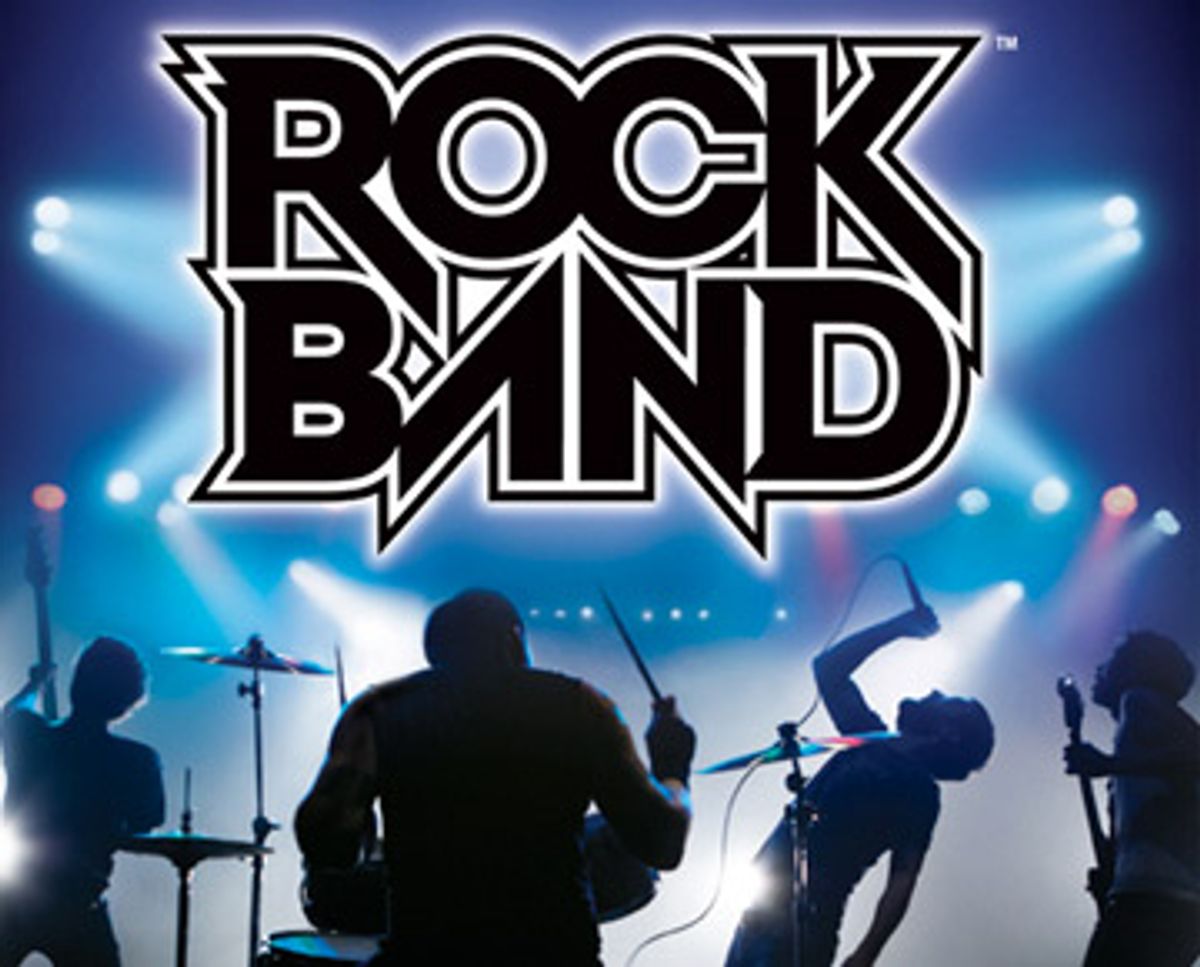 The summer after I graduated from high school, I went on tour with my then boyfriend's rock band. He was the drummer for an outfit that would eventually become disconcertingly well known, and since I was leaving for college in the fall, probably never to return, I was loath to leave him to the freedom of the road and the ministrations of wan indie rock groupies.

It was very hot, one of the worst summers on record. The van was filthy -- crammed with equipment, sleeping bags and unwashed bodies. My boyfriend was sweet and wonderful, but his bandmates (not unfairly) resented my presence, and when tensions between the frontman and me flared into full-scale conflict, causing him to permanently revoke my in-transit bathroom privileges, my parents arranged a plane ticket home. All in all, not the most enjoyable experience, but chock-full of valuable lessons: how to assemble and disassemble a drum kit in record time, that it was possible to survive on a diet of gummy worms and beer, and that sad boys who write sad songs about love are often total jackasses.

Ten years later, I am slumped at my computer, reading an Internet recap of a 2-year-old episode of "Top Chef" that I have seen six times. I have not put on hard pants -- that is, pants with a zipper or pockets -- for four days. The man I married is on the couch in the living room, his eyes glassy as he diddles the control on the Xbox, blowing to smithereens shadowy figures lurching across the screen. We haven't spoken in several hours.

"Ben?" I say. No answer. "Ben? Ben?" I repeat his name over and over again, with increasing desperation, finally culminating in a single, furious shriek. "BEEEEEENNN!"

We live in a two-room apartment. Next door, the neighbor bangs on the shared kitchen wall, the pounding muffled by drywall. "Quiet!"

Finally, Ben looks up. "Sorry, baby. It's the noise-canceling headphones."

Ah yes, the noise-canceling headphones. You could lock Rush Limbaugh, Phyllis Schlafly and Mullah Omar in a room together with a stack of Hustlers and 10 ounces of meth, and they couldn't come up with anything more misogynist. I storm back to my desk and type the phrases "my husband" "addicted" "video games" "HELP" into the search engine. Hundreds of links appear.

I click on the first one, a Christian counseling Web site, where a desperate woman named Tiffany, whose husband plays video games nine to 11 hours a day, is reminded by the nonaccredited Christian counselor that man is master of her dominion and tells her to pray to Jesus to restore her husband's love.

This isn't going to work for me. Besides, I have already prayed to the Jewish God for guidance, and the Jewish God, as he has done for millions of Jewish wives since time immemorial, advised me to rip my husband's headphones off his head and scream at him for never putting his leftovers back in the fridge. This tactic proved less effective than I hoped.

I click on another page, where a forum of concerned women instruct me to regain Ben's attention by walking around the house dressed in skimpy outfits and waggling my hips provocatively. One enterprising poster, aptly named Cyberhottie69, even suggests draping one's naked breasts somewhere impossible to miss -- like the coffee table, or on his head, like a doughy, undulating hat.

The angle Ben is sitting at makes this impossible, but I sit beside him on the couch, unzip my hoodie to reveal the lacy top of my bra, and press my breasts firmly against his bicep.

"Baby!" he swats me away. "I'm killing Nazis here! I'm saving our people!" His eyes are alight with righteous anger.

"No, you're not!" I want to scream. "You're not killing anything! You are pointing a piece of plastic at another piece of plastic and pretending something happens! You are not a fearless teenage hero of the Warsaw ghetto uprising! You are a copywriter on the Upper East Side and you are over 30 years old!"

The most depressing thing about getting older isn't really the reminders of inevitable physical decay -- the gray hairs that pop up in unexpected places, the faint lines beginning to etch themselves permanently in the corner of each eye, the mornings when you wake up with a hangover, even though you haven't been drinking -- but the gradual winnowing of options, as your personal limitations become more and more obvious and eventually start beating you about the head and neck with brutal force. The chasm between who you planned to be and who you are grows wider and impossible to traverse.

We try to make ourselves more interesting. We might take up salsa dancing, or become obsessed with cheeses, or begin to wear a fez in public. When this fails, we begin to take out our hostility on the person we feel trapped us in our inescapable little shell of mediocrity. Whether this hostility is expressed by retreat into a fantasy world in which one is a gun-slinging super-fighter saving the world from totalitarian evil (him) or a plunge into unforeseen depths of pathetic, whining neediness (me), the result is the same. You start to fake-hate each other, and if you're not careful, the fake-hate festers into real hate, and suddenly, ladies at synagogue are clucking their tongues at your mother. "It's such a shame! They seemed like such a nice young couple."

"If you don't stop playing that game right now, I'm filing for divorce!" I holler. He can't hear me. You know, the headphones.

But this was all BRB, Before Rock Band.

For those of you who haven't yet experienced the unmitigated joy of the must-have video game of Christmas 2007, I will explain. Like Guitar Hero for people with social skills, Rock Band is a game in which you pretend you can play instruments: a plastic guitar with color-coded buttons, a microphone and a set of "drums" consisting of four round motion-sensitive pads. A motley collection of preselected, pre-licensed songs from a variety of artists -- Weezer, Deep Purple, Metallica, Radiohead -- have been translated into a series of blinking colored bars that appear on the screen and serve as notes. Hit them, and you are rewarded with stars, fans and new, more challenging songs; meanwhile, sloppy, incompetent playing earns surprisingly real (and traumatizing) jeers of contempt from the tattooed, pierced and computer-generated audience.

Ben bought the game over the holidays, lugging the huge box home on foot through the New York winter slush. I knelt beside it on the floor, brushing the beads of oily precipitation from the damp lid.

"I thought we should have something to do, while we're stuck at home with no one else around," he said.

I had my doubts. Apart from an episode of Tetris-induced mania in 1992 that went on for weeks and could have cost thousands of lives, I have stayed away from video games. I'm not good with technology in general -- my iPod has stayed dormant for years, so terrified am I of unplugging the charger from the computer at the wrong time and accidentally erasing all I hold dear -- and the Xbox and I have been engaged for some time in a cold war based on the doctrine of mutually assured destruction: If I touch it, I'll break it, and then Ben will kill me.

"You like to sing," he says, slinging the nylon guitar strap around his neck and stroking the keys. "So sing."

Singing along to a video game isn't like singing in any recognizable way -- that is, in a way people would want to listen to. No points are given for tone, expression, emotion or the ability to actually carry a tune. All that is required is to make a sound of the correct frequency, for the proscribed amount of time, and you can howl like a German shepherd with a bladder stone. But try to bring a little variation, a little soul to the table, and you get the net.

"Why don't you try the drums?" says Ben, after I am booed off the stage for the fourth time for my rendition of the Rolling Stones' "Gimme Shelter."

"I don't know," I say, discouraged. Can't I ever be good at anything? "I've never done any drumming before. It looks hard. I don't want to mess it up for you."

I often fantasize about sitting down in front of a musical instrument and magically being able to play it, but I have accepted that this would probably require some kind of unusual brain injury, like that episode of "House" in which Dave Matthews gets into a bus accident and becomes a piano prodigy. So I'm not sure what happened, if I had a small stroke or what, but when I sit down at those fake drums something transforms in me. All my fake-hate melts away. I am more than adequate -- I am good. Really good. It's as if all of those nights standing patiently in the corner at gigs, wondering if I was ever going to get to take a shower again, had taught me how to play the drums through osmosis. I know instinctively what to do, and miraculously, so does Ben. Note after blinking colored note on the screen explodes with our rock. The fake crowd roars. I fake drum faster. Our fake band, Sex Baby, embarks on a fake world tour on our fake jet, playing fake stadiums in all the fake capitals of Europe. Our fake selves grace the covers of fake magazines, and our fake fans number in the millions. When our fake manager calls to tell us we've been invited to play the fake Hall of Fame showcase in fake Stockholm, my real husband turns toward me, and smiles.

"I love it," I say, tired but exuberant. "My hands are killing me." Still smiling, he reaches for me, and gently kisses my blistered palm. "Let's take a break."

Ben cocks his eyebrow. "Well, I'm going to bed. I guess you can borrow my headphones if you want."

Life is filled with unpleasant realities. We have to watch what we eat and go to the dentist; we have to control our spending and unplug our electrical devices at night, lest we become obese and toothless, drowning in a sea of consumer debt and glacial melt. None of us can stay 18, and very few of us will ever be rock stars. It's important to acknowledge this; it's healthy. But sometimes we need to escape into a daydream in order to face what we've become, and what we will be. And if once in a while you can escape with someone else, then that's about the best you can do.

I figured Metallica could wait until tomorrow. For the first time in a long time, I had a real live husband who was taking his headphones off. I wasn't going to be the one to put them back on.