In every dream home, a heartache

With its teen sex, meth habits and quarter-life crises, Janelle Brown's addictive Silicon Valley novel shows that in every boom, there's a bust. 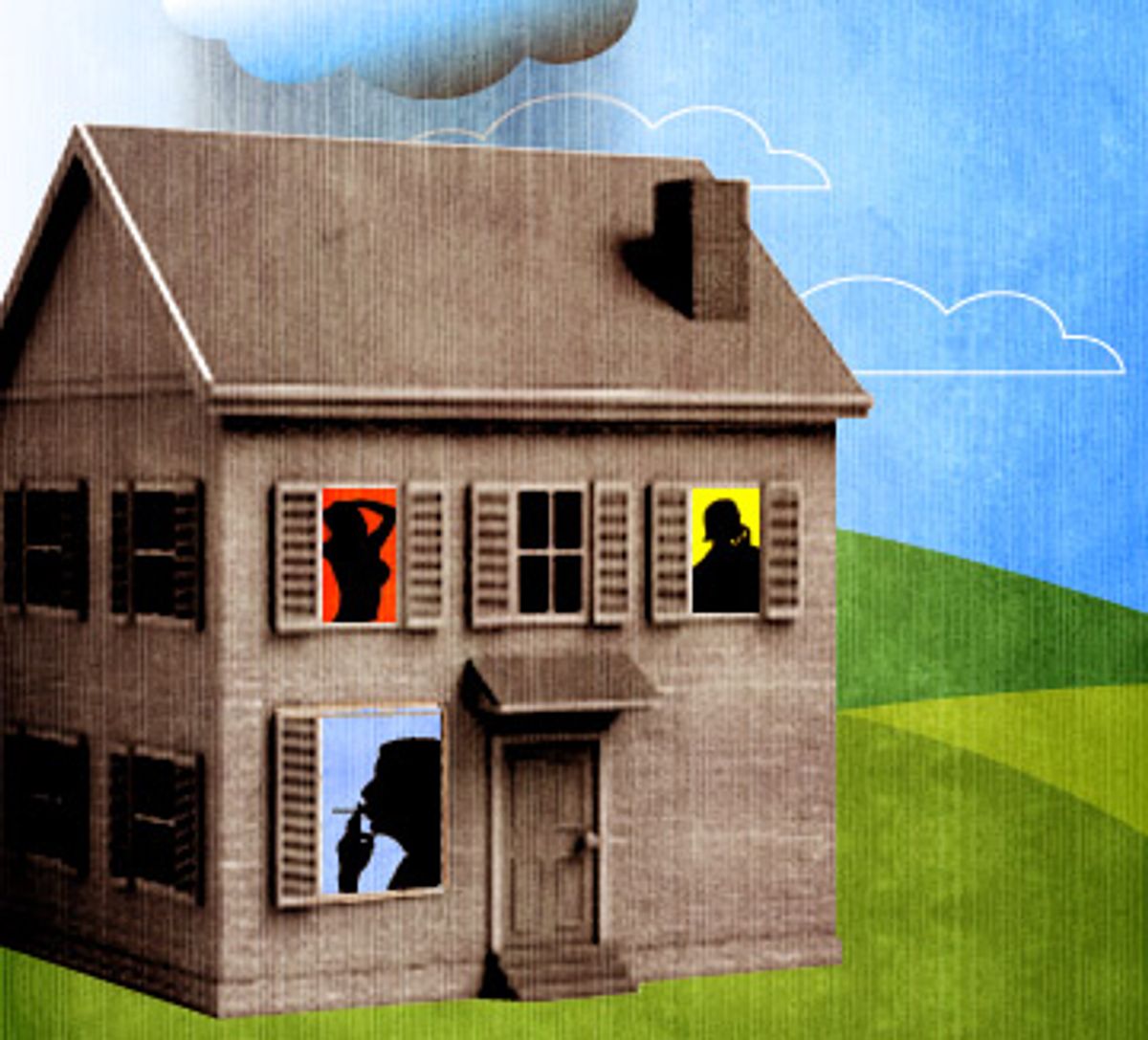 Remember the boom? The seemingly endless sunny days, the IPOs, the stock options, the insatiable appetites for stuff -- food and drugs and money and exposed pipes and stainless steel kitchens? Remember all that hope and greed and youth and bright shining possibility?

Novelist Janelle Brown, a journalist who toiled at California's new media Disney World throughout the 1990s, has made boom-y Northern California -- or a contemporary simulacrum of it -- the star of her debut work of fiction, "All We Ever Wanted Was Everything." (Full disclosure: Brown was a writer at Salon; her tenure preceded my hire; we have, to my knowledge, never met.) In Brown's fictional Silicon Valley, it's as if the fountains of money that gushed over warehouse districts and formerly middle-class suburbs had never been staunched by recession or war or reality. But she does not view this glittering stuff-machine nostalgically. The universe she has created has all the warmth and authenticity of the too-brassy dye job its heroine receives: It's a little too lustrous to be real, too obvious a mask for the gray beneath.

In Santa Rita, Calif. -- described in the first sentence as "perfect, just perfect" in June -- the prosperous Miller family are practically the only residents not yet to have been showered by nearly pornographic wealth. They reside in a 5,200 square foot Colonial, true, with a pool tended by a wiry pool-boy-cum-meth-dealer, and a kitchen in which matriarch Janice prepares aspirational yet vaguely revolting meals that include things like melon puffs and lemon-Ahi crostini.

But the perfect June day on which "All We Ever Wanted Was Everything" opens is the day that the serious money starts rolling in. Janice's husband Paul's new anti-balding pill, Coifex, has hit the open market in an IPO, and shares have quickly risen to more than a hundred by the time Californians have crawled out of bed, making Janice the newest inductee to her tennis-playing, cocktail-quaffing, benefit-hosting friends' half-billionaire club. On paper, anyway.

The Miller family's fortunes have unraveled before dinner. At home chilling the champagne, Janice hears via messenger that her 28-year marriage is over; Paul has taken off with her best friend, and Janice's coping mechanisms leave much to be desired.

The Millers' offspring have their own set of problems. Eldest daughter Margaret, long decamped for Los Angeles to escape her empty-souled and materialistic parents, has just been forced to shutter her feminist zine, Snatch, and been ditched by her loathsome lunkhead of a boyfriend, an actor who has recently made it big and moved on to his nymphet costars. The irritatingly self-righteous and self-deluded Margaret is only occasionally in possession of a mordant sense of humor (she "has never considered herself an optimist -- optimism being for hopeless idealists like Anne Frank"). She is also $100,000 in debt and lives in passive denial about her grim circumstances, hanging up on creditors, and going to pricey dinners with her more successful friends. Since she cannot admit defeat to them (or anyone), she winds up shelling out vast sums of money she doesn't have.

The youngest Miller, Lizzie, has recently shed 37 pounds, her social inhibitions, and in short order, her virginity, achieving her stated goal of figuring out exactly what all her sexually active classmates are talking about. ("She [now] knew from experience, for example, that the male anatomy did not taste like chicken, despite Jennifer Hillbrand's announcement in the girls locker room.") Lizzie loves the swim team, desserts and the sexual confidence she's gained by bedding six boys in one year; she is blissfully unaware of the reputation she's quickly developed among her schoolmates and their catty mothers.

But it's also a sharp, ugly critique -- not simply of the standard American dream stuff. Yes, immaculately manicured lawns sit atop sludgy rivers of unhappiness and rot. In this observation, Brown's book is no more original than any author who's ever put pen to paper in an effort to explore our big fat capitalist consciousness.

Brown seems to be doing more here than simply making a reach for the green light at the end of the dock, though. She's also going after the intellectual (and not simply the power) trade-offs of marriage, the double standards of teen sex, the failure -- both literal and psychological -- of post-feminist feminism, the cutting ways in which women often treat each other and the stomach-turning ways in which they treat themselves in service to the men in their lives. She's also tackling the poisonous influence of all your major opiates: sex, drugs, money, fame, religion.

This is also an unapologetically feminist book. Brown unforgivingly draws out the ways in which the fortunes of the women at its heart have been shaped by their inability to confidently articulate or carry out their own desires without falling victim to the whims of men.

Janice's expensive tastes were formed by eating capers and cornichons pilfered from the abundant pantries of the mansions her mother cleaned. Having earned a scholarship to a good West Coast school, she was about to spend a promising postgrad year in France when she met Paul, a WASP scion. Instead, she simply allowed herself to get pregnant, with a shrugging passivity that foreshadows her own daughter's later unwillingness to pick up a phone and speak to a creditor. The next three decades of her life will be spent in domestic service to her husband, who naturally cuts her out of the IPO fortune she has spent years anticipating.

And Margaret, the woman whose feminist credentials -- including a master's thesis hilariously titled "The Mother Alien: Contemporary Cinema and the Poststructuralist Feminist Cyborg" -- have all been developed and honed in conscious reaction to her mother's shell of a life, has allowed her own life to be derailed by Bart, the stupid Hollywood heartthrob. It's the inability to resist the siren song of male approval that is Brown's most depressing theme. When Margaret first meets the pompous, overconfident Bart -- an inevitable shadow of her hard-driving dad -- she thinks, "she should be repulsed by this man, with his foul mouth and crude ambition and overflowing testosterone, but instead she found herself drawn to him ... She could picture it clearly: a throbbing engine between her legs, sitting behind this cocky man with her arms wrapped around him, holding on for dear life. The ultimate submissive female position ... she was weak, so weak. She needed to go home and reread her Germaine Greer."

But she doesn't go home and read her Germaine Greer; she moves to Los Angeles with Bart. And despite her immersion in an uncompromisingly grrrl-empowered zine like Snatch, she pays no attention to the girl who actually could most use her guidance: her little sister.

It's Lizzie's tale that is the saddest arc of Brown's tale. She charms us with her translucent honesty about her own fears, plans and shortcomings. Lizzie is Brown's most effective creation, bubbling with confusion and energy, but buoyed by her precocious sexual success. Even if the reader senses the self-hatred and sadness behind it, it is impossible not to ride along with her:

"Being with a boy was amazing. She was in love with it all: the significant looks in the kitchen, so dense with meaning and portent. The lingering touch on the thigh, the waist, the hand, followed by the invitation to go upstairs and 'check out the house.' Then, the closed door and the beating heart ... They really liked her, they found her totally irresistible. She bounced from one boy to the next and back, hooking up with each guy for a week or two, maybe a weekend, maybe just a night, before the next would swoop in."

It is a tribute to Brown's ability to get under Lizzie's early teenage skin that reading the passage in which she is finally ushered (by her still-pure and sweet best friend) into the boys' locker room, where she sees on the wall the list of names of the boys who've bedded her, comes as almost as much of a punch in the gut to the reader as it does to Lizzie herself. Even though we knew it all along, it still hurts to learn, at the same time that Lizzie does, that this kind of sex isn't making her powerful at all.

One of the great treats of "All We Ever Wanted Was Everything" is the author's skill in skittering us through a bad day, presenting us with ill omen after ill omen -- unripe melons, a missed tennis game, uncomfortable flip-flops -- yet leaving us ever-hopeful that we have read the tea leaves wrong, that this blue-skied day will not sour.

Brown evokes the powerful fantasy of impending transformation -- just around the corner, things will be different and we will be rich and successful and beautiful and popular and righteous -- even as she takes no pain to disguise the fact that this liminal moment is a sham, making the inevitable yank back to earth crueler. After all, we knew it was coming all along.