Arab-Americans are concentrated in swing states like Michigan, Ohio, Pennsylvania and Florida. And the early signs are not good for McCain. 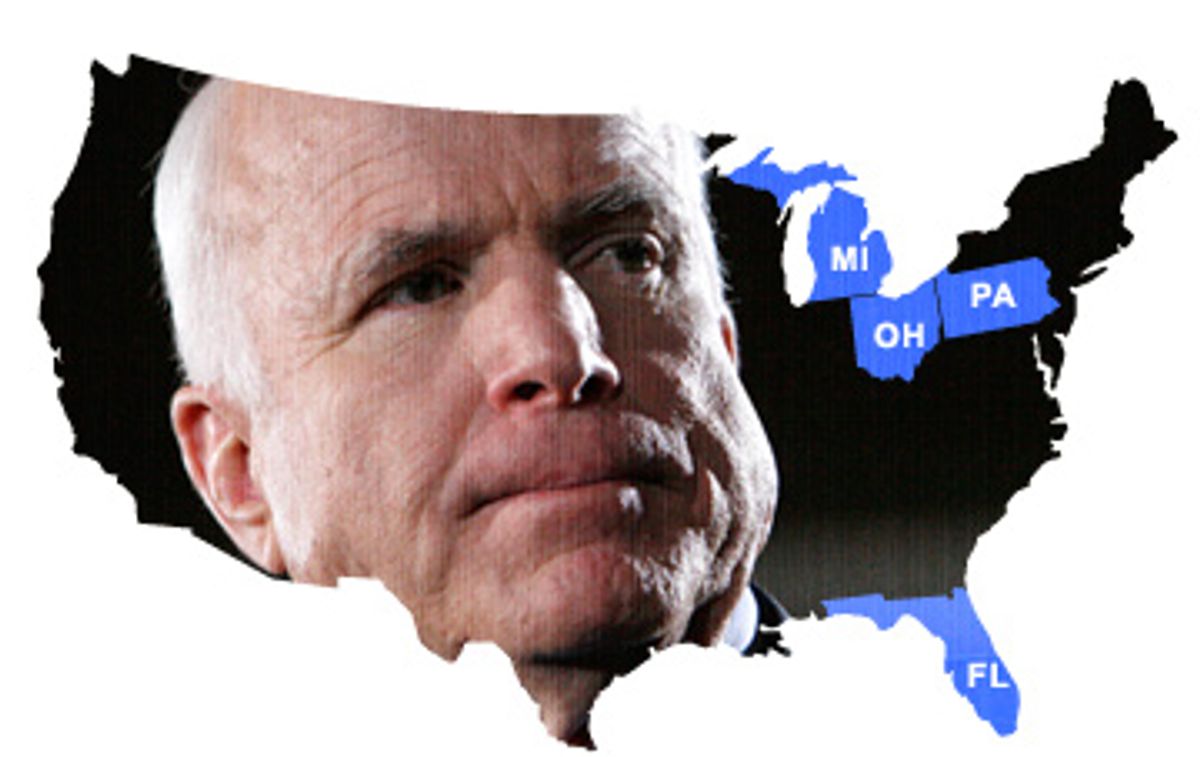 Not long ago, the John McCain campaign dropped a prominent Arab-American businessman from its Michigan state finance committee because of allegations that the man was an "agent" of Hezbollah. The charges, made by a right-wing blogger, were unsubstantiated, but fears of being associated with Arab terror caused Republican knees to jerk, and cost Ali Jawad his position. All politics, even national politics, is local, and Jawad's abrupt dismissal may cost McCain many votes among Southeastern Michigan's large Arab-American community. But more important, Arab-Americans across the country are looking for changes in domestic and international policy that McCain seems unwilling to pledge -- and they are concentrated in swing states that he will need to win this fall. Does John McCain have a problem with Arab-American voters?

Recent polls show a tight race between either Democrat and McCain in Florida, Pennsylvania, Michigan and Ohio, all states where Arab-Americans account for an appreciable percentage of the vote. Such polls have limited utility with November so many months away, but that it will be a close election in those key states seems clear. In a tight election, the votes of a well-placed minority -- Arab-American votes -- can be crucial.

Arab-Americans are a highly diverse group of up to 3.5 million persons, according to Arab American Institute figures. About three-quarters of them are Christian and a quarter Muslim. Eighty percent are U.S. citizens. Many are from families that have been in the U.S. for decades or even a century. They come from all over the Arab world, from Morocco to Egypt and Iraq to Yemen, but the traditional core of the community is Lebanese and Palestinian.

Because of their diversity, Arab-Americans face challenges in organizing as a coherent political force. They tend not to give money to political campaigns in the name of Arab-American causes. One activist in the community estimated that since 1990 pro-Israeli groups have outspent pro-Arab ones on political campaigns by about 60-to-1, with the pro-Arab organizations having given less than a million dollars in all that time.

Arab-Americans do, however, have some distinctive concerns in common. They are more likely to care about the Iraq war and the Arab-Israeli peace process than other Americans. They are also particularly sensitive to racial profiling and assaults on civil liberties.

That has put them at odds with the Bush administration and the Republican Party, and has contributed to a hard swing toward the Democrats. After a plurality voted for Bush in 2000, the community favored Kerry in 2004 and has been increasingly trending Democratic. About 40 percent have been consistently Democratic since 2000, but the proportion identifying themselves as Republicans nationally has fallen in the past eight years from 38 percent to 26 percent.

Arab-Americans are both very likely to vote -- their turnout is 20 percent higher than that of the general population -- and they are concentrated. Two-thirds of them live in just 10 states, including the swing states of Florida, Michigan, Ohio, Pennsylvania and Virginia. In Ohio, Pennsylvania and Florida, Arab-Americans have made up 2 percent of the electorate in recent elections. That sounds like a small proportion, but in a close race it can make a difference. In 2000, Bush won the Arab-American vote over Gore by 7.5 percentage points. Bush took Ohio that year by only 165,000 votes. He and Gore virtually tied in Florida in the popular vote.

In other words, up to 5 percent of Michigan's vote is Arab-American. The Democratic candidate has won the state in each of the last two presidential elections by no more than 200,000 votes. Recent polling suggests that in a head-to-head contest between John McCain and Barack Obama, the two would split the state down the middle. Many analysts believe that the Democrats cannot win in November without winning Michigan.

Prior to the Bush administration and the invasion of Iraq, the state's Arab-American voters had traditionally split their vote, with slightly more voting Republican than Democrat. In 1990, they solidly supported Republican gubernatorial candidate John Engler and may have helped give him the margin of victory. But in this decade, like much of the Arab-American population nationally, they have had disagreements with the Bush administration.

John McCain has now exacerbated his problems with Michigan voters by offending the large Lebanese Shiite community. Ali Jawad, president of Armada Oil & Gas and founder of the Lebanese American Heritage Club, had been invited to a $2,300 a plate fundraiser for McCain in Orchard Lake, Mich., in late April, when alarmed calls started coming in for him from the McCain campaign inquiring about his alleged activities on behalf of Hezbollah, activities that he denies.

The blogger who made the accusations, Debbie Schlussel, did so on grounds of guilt by association. She charged, without proof, that Jawad was a "key agent of the terrorist group in the Detroit area." She said that Jawad had met with Hezbollah party officials on a trip to Lebanon, and had visited Shiite villages like Bint Jbeil and Nabatiya that are politically dominated by Hezbollah. Jawad replied that he had met with a cross section of Lebanese politicians with the knowledge of the U.S. Embassy. Schlussel provided no evidence that Jawad had provided material support to Hezbollah.

Jawad is a native of Southern Lebanon and, like virtually all Lebanese Shiites, sees Hezbollah as a legitimate political party. As a Michigan-based contributing editor at Daily Kos has noted, "Lebanese in Dearborn view Hezbollah with much the same mix of distrust mixed with nationalist pride and identity that Catholic residents or former residents of IRA-controlled neighborhoods in Belfast or Derry view the IRA." Indeed, Hezbollah has large numbers of seats in parliament and will form part of the national unity government under the just-concluded Doha accords. There is a difference between such a stance on Hezbollah's role in Lebanese politics and support for terrorism. Jawad said in 2003, "Killing innocent people -- we reject that ... Hezbollah does not fit this category. It has protected its people." In other words, Jawad, who says it is important to follow U.S. law, rejects terrorism.

When the McCain campaign threw Jawad under the bus, it admitted that it had done so because of the unsubstantiated "Hezbollah rumors." Osama Siblani, president of the Arab American Political Action Committee (AAPAC), reacted angrily to Jawad's dismissal at a recent press conference in Dearborn. "The Michigan Republican Party and the McCain campaign," said Siblani, "need to be reminded that the blood of Arabs is red and the color of their money is green." He emphasized the extensive philanthropy of Jawad, who came to this country in 1976 from southern Lebanon. "We do not want a president," Siblani said, "who makes a decision ... based on false information ... This is an insult to every Arab-American and Muslim-American in the country."

The dumping of Ali Jawad was hardly the first point of friction between McCain and the Arab-American community. The incident demonstrates the way in which the embrace by the GOP of elements of the Zionist right and fringes of Evangelical Christianity have made it hard to hold on to the growing Arab-American and Muslim-American vote. The minority of Arab-Americans who are Muslim have been disturbed at McCain's constant use of the adjective "Islamic" when referring to terrorists. (Muslims use the word "Islamic" to refer to the ideals of their religion, and so might refer to a "Muslim criminal," but an "Islamic criminal" would be a contradiction in terms.) McCain's campaign says he will continue to use the word. (This obstinacy recalls his vow in 2000 to continue to use the word "gook" when referring to the Viet Cong, a term that offended Asian-Americans. At length McCain relented and dropped the slur.)

The Council on American Islamic Relations (CAIR), a major Muslim-American lobbying group, slammed McCain for having said last year that he wanted the U.S. presidency to be in Christian hands, complaining that he was attempting to introduce a religious test for high office. Muslim-Americans were also disturbed that McCain sought the endorsement of evangelical preacher Rod Parsley, and that McCain had referred to him as a "spiritual guide." Parsley has called for Christians to make war on Islam and terms Islam "a false religion." Last week, when McCain repudiated both Parsley and John Hagee over their hate speech, CAIR applauded the Arizona senator, noting that he specifically complained about Parsley's comments on Muslims. Whether McCain's having distanced himself from the two hate-mongering reverends will be enough to repair his strained relations with Muslim-Americans has yet to be seen.

Ultimately, though, issues are more likely to drive Arab-Americans' voting decisions than McCain's missteps with the community. McCain is dedicated to keeping U.S. troops in Iraq and to fighting on until "victory." He displays obvious partisanship toward the Israeli right, making clear his inability to play the role of honest broker in Israel's negotiations with its Arab neighbors. His GOP has become hostage to anti-Arab and anti-Muslim hate-mongers among the televangelists. These considerations disturb many American voters, but Arab-Americans above all.

My own conversations with some Facebook friends suggest Arab-Americans are already looking elsewhere. Hazem Tabbaa, a Michigan native now studying at the Drexel University College of Medicine in Philadelphia, slammed McCain for "criticizing Senator Barack Obama's 'negotiating with the enemy' tactic." He calls McCain a "war first politician." He also has lingering resentments over McCain's willingness to seek an endorsement from Hagee. He views McCain as "pretty much the same" as Bush. Laila Shereen, an Arab-American poet and digital artist, told me, "I think anyone concerned about social justice in the Middle East must necessarily support Obama." Maybe that's why Zogby polling has found that a strong majority of Arab-Americans now favor Obama.