Nintendo's new fitness game keeps making fun of me. But its Balance Board could allow for some amazing video games. 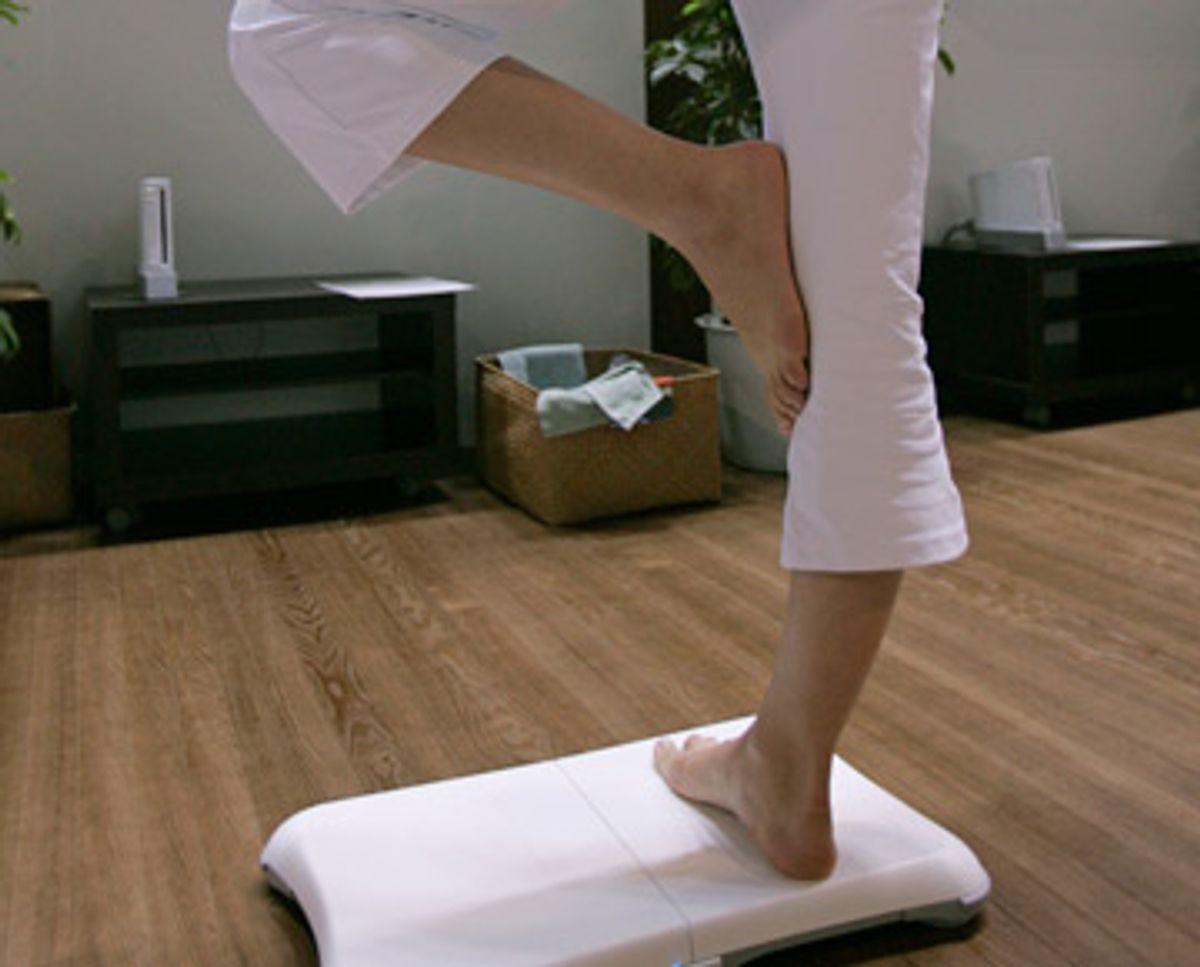 Before I describe my experience with the Wii Fit, Nintendo's new stay-in-shape game, let me ask the nurse to hook up my oxygen tank.

According to the Fit, I'm seriously unfit. Moments after stepping onto the Fit's Balance Board -- a bathroom scale-like device whose happy, curvy proportions mask the undermining Mean Girl lying within -- the system pronounces me underweight for my height.

Then the Fit's animated on-screen Balance Board asks me to stand up straight so that it can appraise my balance. Oh dear, the Fit declares: Turns out I'm a leaner, carrying my weight heavily to one side. This prompts the Fit to wonder, with not a small amount of glee, how I make it through life. Do you frequently trip while walking, it asks? (The game offers no way to shoot back, "I do all right, dipshit.")

After a few more tests, I arrive at the Fit's bottom-line assessment of my fitness, my Wii "Fit Age," which is my real age plus several years to account for my physical disrepair. My Fit Age is 36. I'm relieved -- that's not so old!

But the happiness doesn't last. A few days later, after putting myself through yoga, aerobics, balance games and strength training on the Fit, the system measures my health once again. This time I fail Fit's battery of balance tests with determined flair, the toothpick-like appendages I call my legs shivering under my featherweight frame. The Fit, which calls me "unbalanced" several times, is not pleased. I clock in at the ripe old Wii Fit age of 47.

"Oh," the system says. "Your body is much weaker than it should be." Did I mention that according to my driver's license I'm 29?

In theory, the Wii Fit seems perfect for people like me: Lazy people, folks for whom cracking open the driver's-side window while we're stuck in traffic is plenty outdoorsy, thank you very much. But in practice, the Fit, with its tsk-tsking attitude, didn't do much to encourage me to take up physical fitness. Instead, what really got me juiced was its potential for creating transcendent video games. It's the hardware -- the Balance Board -- not the software-based training routine that's the real innovation here.

I wouldn't want to leave the impression that I'm averse to fitness. Every once in a while, over the years, I've considered taking up some kind of physical activity, but then along came some video game or acclaimed HBO series and my plans went awry. Once, in a fit of self-improvement, I bought an exercise bench, but after two weeks of on-and-off weight lifting (while watching "American Idol") I developed a dull groin ache that I became convinced was cancer. I quit the weights, the pain subsided, and I found that the exercise bench made a great place to stack junk mail.

In retrospect what I thought was cancer was likely only the physical manifestation of boredom. And that gets to the Wii Fit's obvious promise, to turn working out into a fun game.

The Balance Board, after all, is really a very well engineered game controller. When you stand on it, the device captures not only your weight but also the precise, moment-to-moment shift of your weight between each of your feet. It can paint, from this data, a surprisingly accurate picture of your body's configuration -- it can tell if you're holding your hips too high during a push-up, whether your torso is twisting fast enough to keep up a virtual hula hoop, and if your yoga warrior pose is closer to that of a wimp's.

Trouble is, many of the Fit's exercise routines fall into a funny place between beginner and intermediate. People who already work out are going to find the Wii too slow; you've got to wait at least a minute as the software switches between routines, a stop-and-start process that'll convince you to break down and go to the gym already (or just buy a Yoga DVD).

But as a beginner, I found most exercises too hard. I had to reach for my Medic Alert bracelet after trying out the push-up routine (even though I'd set the difficulty to "beginner"). It doesn't help that the Fit is a tough coach: It's constantly measuring, scoring, appraising your efforts. The Fit seems unmoved that you're getting your cream-puff ass off the couch for the first time in weeks and so maybe it's not such a big deal if, say, you're swaying like a wet leaf during that supposedly easy yoga pose. No, the Fit wants to make sure you are aware, just for the record, that even though you're out of breath and feel like you might throw up, you also totally sucked.

It's in the series of balance games that the Fit's potential really shines. In one game, you lean left or right as you stand on the board, head-butting soccer balls coming at you on the screen, or slaloming through a ski course, or tilting an on-screen mini-golf table to slide balls left and right. There's something magical about how the Fit translates the slightest shift of your feet into on-screen actions -- it's unlike anything I've ever felt before in a game, a sensation that I was right there in the screen.

To be sure, many games use non-traditional controllers -- Guitar Hero, for instance, or Dance Dance Revolution, which asks you to push buttons with your feet. What's different about the Fit is you're not pressing anything; it's sensing your full body's movements, and to succeed at it, you've got to master something much harder than hand- or foot-eye coordination.

Every part of your body's got to be coordinated -- and as developers create new games to take advantage of Balance Board, we'll surely see a new class of gamers who'll excel at these.

These people will be far different from today's stereotypical gamers: They'll have grace, poise, style. In other words, they'll be very different from me.

Here's a video demo of my run-in with the Fit: