Will the youth vote win it for Obama this fall?

The likely Democratic nominee has a unique appeal to voters under 30. A look at how a strong youth turnout -- or lack thereof -- could affect this November's results. 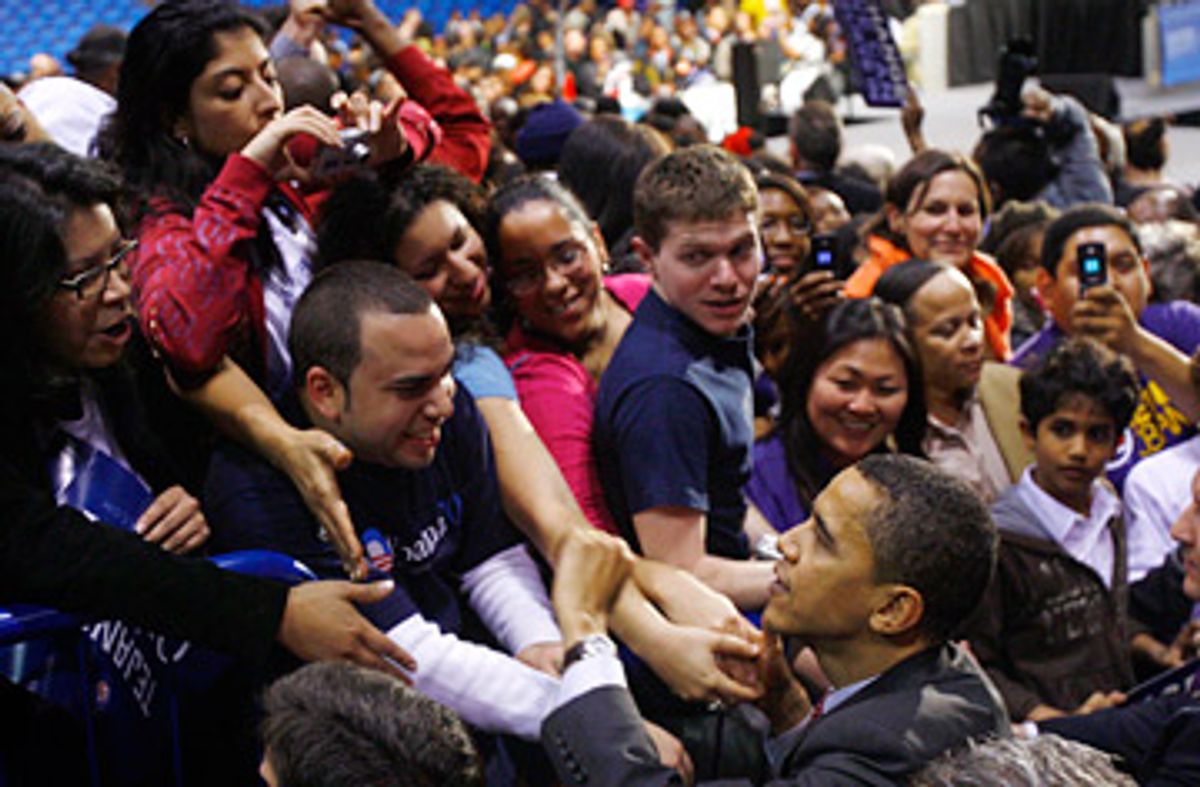 Just who are you, Generation Y? The salvation of Barack Obama and America? Or just more fool's gold in the Democratic search for El Dorado? For as surely as the sun rises in the east, and Tim Russert's Election Night board will focus on one overhyped swing state (Virginia? Colorado?), so have three electability talking points emerged from Obamamania. You, Generation Y, otherwise known as "the youth vote," are one of them.

The creed goes like this: The senator from Illinois (who is just about to put the finishing touches on a victory over the senator originally from Illinois) will inspire record numbers of African-Americans, independents and voters under 30 to go to the polls this November, sweeping away all before him like Peter O'Toole riding into Aqaba.

The African-American part seems pretty solid. The number of black voters will grow, and Obama will outperform previous Democratic candidates among them, perhaps enough to help him by 2 percentage points or more in states such as Virginia and North Carolina and a crucial 1 point -- give or take -- in other battleground states like Florida, Michigan, Pennsylvania, Ohio and Missouri.

The struggle for independents, on the other hand, is just that -- a struggle. Both Obama and his Republican opponent have a natural appeal to unaffiliated voters, and it is far from apparent how their support will ultimately shake out. But surely group No. 3, voters between the ages of 18 and 29, will show up for Obama? The tremendous enthusiasm and crowd support at his rallies, the obvious youthful tenor of an Obama crowd, has already translated into higher turnouts in several key primary states and will give Obama a huge advantage this fall. Won't it?

Not so fast. A few bumps appear in this generational road. There are two major caveats. To begin with, even a large increase in under-30 turnout this year will produce a surprisingly small impact on the actual makeup of the electorate. That small impact, however, could still be decisive if it occurs in concert with better overall numbers from this cycle's Democratic candidate.

Most important is that much, if not most, of the uptick in youth turnout already occurred four years ago. Howard Dean, John Kerry and, to be honest, George W. Bush, have already done most of the necessary work to motivate young voters.

But in 2004, the turnout for 18- to 24-year-olds rose even more than the national increase. Turnout for 18- to 24-year-olds increased to 41.9 percent, and while there are some apples-to-oranges problems with the data, turnout among 25- to 29-year-olds climbed nearly as much. The Democratic candidate's margin grew as well -- Kerry won 54 percent of the 18-to-29-year-old vote to Bush's 45 percent, though much of Kerry's improvement over Gore's percentage could have come from Nader supporters returning to the Democratic fold.

Despite the gains of 2004, however, the net import of all these figures is this: 18- to-29-year-olds supplied a minuscule portion -- only about .03 of a percent -- of Gore's ultimate popular-vote margin in 2000 (and obviously may or may not have supplied the difference in Florida) and couldn't put Kerry over the top, even though their increased turnout and swing toward the Democrats added 1.53 percent to Kerry's popular vote total in 2004.

So one obvious and pretty vital question about 2008 is whether, anecdotal evidence of stadium-size rallies to the contrary, most of the "surge" in youth voting has already taken place. This theory would also contend that the higher primary turnouts evident in certain key states are a result of interest and intensity building over the course of the past eight years, and particularly since the beginning of the Iraq war, and not solely the result of anything unique about the Obama candidacy.

Furthermore, what the god of demographics giveth, he or she might also taketh away. I worked for the Howard Dean campaign in 2003 and 2004, and I have always felt that a big part of his last-minute decline in Iowa four years ago was due to a mostly older electorate engaging in a more detailed consideration of the Deaniacs. Meaning, many of the graying Iowans took a look at the hundreds if not thousands of young out-of-state campaign volunteers who were knocking on their doors, decked out in orange ski hats and claiming to be part of "the perfect storm," and decided they didn't want what the youngsters were selling. Clearly Hillary Clinton has built impressive margins over and over this season among seniors, and I suspect that part of her appeal to older voters stems from a similar backlash at the younger alternative. The more messianic the whole Obama thing seems, the more his brand becomes associated with kids, and perhaps the more aged wine there is for McCain & Co. to sip.

The one other piece of evidence that undercuts the "youth surge" theory is double counting. A lot of those 18- to 29-year-old voters will also be members of minorities. The rapidly growing Latino vote, which will probably lean toward the Democratic candidate this fall, is disproportionately young. If black voters show up in the increased numbers expected, many of those additional voters will be under-30s who heretofore have never or rarely voted. In other words, many young black and Latino Obama voters have already been factored into his margins before the youth vote is counted.

With all that said, increased youth turnout is still a pretty big deal. Generation Y could still wind up as the answer to "Y did Obama win?" Here's a more optimistic take:

Let's assume that overall national turnout rises this year (it was 56.7 percent of the VAP in 2004). Let's project an 8 to 10 percent increase, which would be astounding but certainly within the realm of possibility given all the attention and money this year's campaign has generated. That would make the overall turnout 60 to 62 percent. Let's say that the under-30 turnout rises disproportionately -- and if that doesn't in fact happen, then we are probably experiencing the ultimate "senior moment" and John McCain should relax. But suppose under-30 turnout increases to 50 percent of the 18- to 24-year-olds and 55 to 56 percent of the 25- to 29-year-olds.

The best estimate based on these projections is that 18- to 29-year-olds would rise from 17 percent of the overall electorate to 18 percent. That might seem like an insignificant difference. But consider this: If Obama can increase the Democratic advantage within this group from Kerry's 9 point margin to, say, 15, meaning he'd win the age cohort by 57 to 42 percent -- then his national vote total among all voters will have risen by more than a full point. And in states with more youthful populations, including such swing states as Nevada, Virginia and Colorado, the margin could approach 2 points. If the turnout difference is even more pronounced, then a smaller vote margin among the under-30s for Obama could still give him a point in the overall national vote. With a 57 percent showing among under-30s, he could add 2 points across the board nationally.

Wherever you find it, an extra 2 percentage points in your national margin ain't bubkes. Millions more e-mails, Facebook accounts, YouTube videos and direct new-wave advertising will be aimed at producing just that for the Democratic nominee. McCain will almost certainly attempt to blunt this surge by becoming a kindly uncle or even grandfather figure. Then, when his poll numbers with under-30s don't move, he can always try to compensate by getting a different demographic, one friendlier to Republicans, to the polls. Maybe he'll ratchet up the fear and loathing of young voters to increase the turnout among their opposite -- seniors. Now there's an age group that always shows up to vote.