Be gay, be anything -- just not single!

With same-sex marriage now legal in California, mothers across India and elsewhere are eager to see their gay sons and daughters finally get hitched. 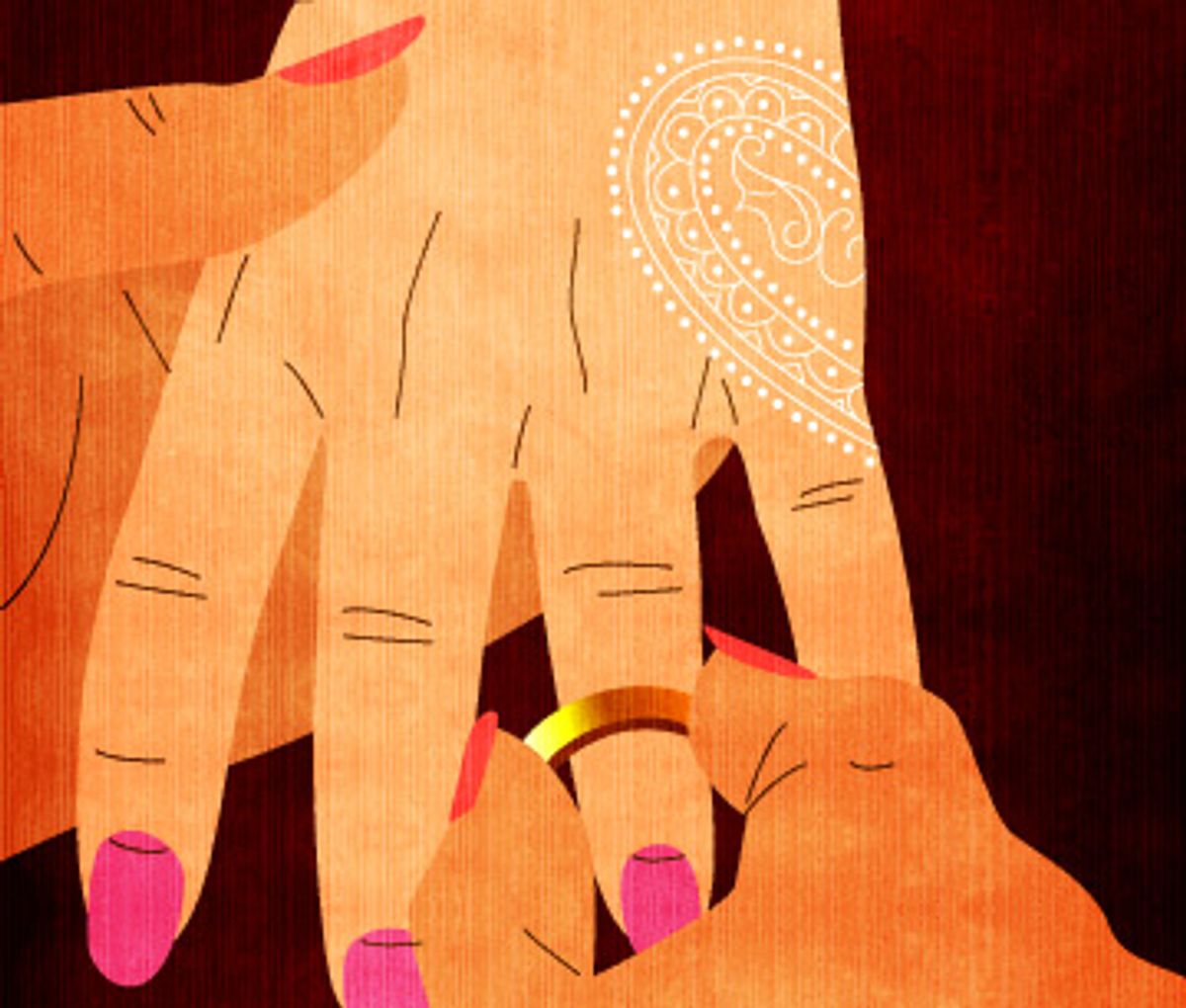 When I left India for America, my aunts worried about who I might end up marrying. "I hope you'll marry another Bengali," an aunt told me. Over the years that relaxed to, "I hope she's a Hindu, even if she's not Bengali." Then it became, "At least another Indian," until finally we reached, "I hope you'll get married to someone before we all die."

She probably didn't mean another man.

But now it might just happen. Same-sex marriage is on a roll in California. First a Republican-dominated Supreme Court said there was no reason gays and lesbians couldn't get married. Now there comes a new Field Poll that says that, for the first time ever, a majority of Californians think same-sex couples should be allowed to marry.

As the pink confetti settles around us, I'm left wondering how immigrants are going to come out anymore. Many of us come from countries that really don't have a word for "gay." India certainly doesn't. There are epithets and some rather technical terms. Coming out in India is usually about marriage, as in, "Mom, Dad, I don't think I am going to get married."

Now the California Supreme Court has yanked that coming-out line away.

Perhaps it's time. After all, the Oxford English Dictionary has apparently had to recalibrate its definition of marriage to allow same-sex nuptials. The Field Poll shows that Californians support the right of same-sex couples to marry by a margin of 51 to 42 percent.

In a state where one in four Californians is foreign-born, that seems to be an astonishing change. When San Francisco Mayor Gavin Newsom started issuing same-sex wedding licenses in 2004, some of the first protests came from Chinese churchgoers. After all, immigrant families are supposed to be socially conservative.

But that might be part of the reason why the tide is finally shifting on gay marriage. (Of course a younger, more socially liberal state helps.)

For my immigrant friends, being gay in California is not much of an issue. Being unmarried in their 30s and 40s is the real issue, the conversation-stopper at Indian potlucks, the thing that makes them stick out at Chinese banquets.

My friend said that when a heterosexual but unmarried Chinese friend of his told his parents that at least he wasn't gay, the parents retorted, "We'd rather you were gay with kids."

Immigrant families just understand marriage, even same-sex marriage, more easily that singlehood. Singleness means you never grew up. It's the biggest failing of parenthood -- the incompleteness of the unmarried child.

It leads to acts of desperation. I've seen the ads for marriages of convenience -- 29-year-old professional Indian gay, 5-foot-9, good job, looking for Indian lesbian facing similar family pressures. There was even a Web site devoted to Assisting Matrimonial Arrangements for Lesbians and Gays from India, complete with a "gaylerry" of posted ads.

In 1993 my friend Aditya Advani went to India with his boyfriend Michael Tarr and complained to his mother that no one would ever come to his wedding. She promptly organized a ceremony. The family priest presided over it. "Openly gay and married in my parents' drawing room at the age of 30," marveled Aditya. "Right on schedule as a good Indian boy should be!"

I recently watched their wedding video at their home in Berkeley while their cats purred on the couch. It still felt like a fairy tale, a lump-in-the-throat act of domestic revolution.

In 2004 when San Francisco started issuing same-sex wedding licenses, Arvind Kumar and Ashok Jethanandani rose at 5:30 a.m. to drive from their home in San Jose to San Francisco to stand in line to get married.

The couple were already married in a sense. Arvind's mother, who had once adamantly rejected her son's sexuality, presided over a Hindu ceremony for the two after they had been together for more than a decade. They are registered as domestic partners in Palo Alto and the state of California. The registration licenses hang on the wall where other couples might have pictures of their children.

Arvind and Ashok couldn't get married in 2004. Despite getting up so early, they were behind 300 other couples in line. They finally got an appointment but by then the Supreme Court had halted the marriages.

At that time Arvind was philosophical. He knew it was going to be a long fight. "We are just fighting to simplify our lives," says Arvind. "I don't want a Palo Alto date, a state of California date, a Hindu ceremony date. I just want one date, one wedding anniversary like everyone else."

Now Arvind and Ashok can get their one date after all. On June 17 California counties will start issuing marriage licenses to couples like them.

The next generation of immigrant gays and lesbians will have to come up with some other coming-out line.

And the revolution will have to find some new frontier.

It might just be time for the gay arranged marriage.