The puzzle pieces fall into place -- and the picture gets stranger -- in the season's last episode. 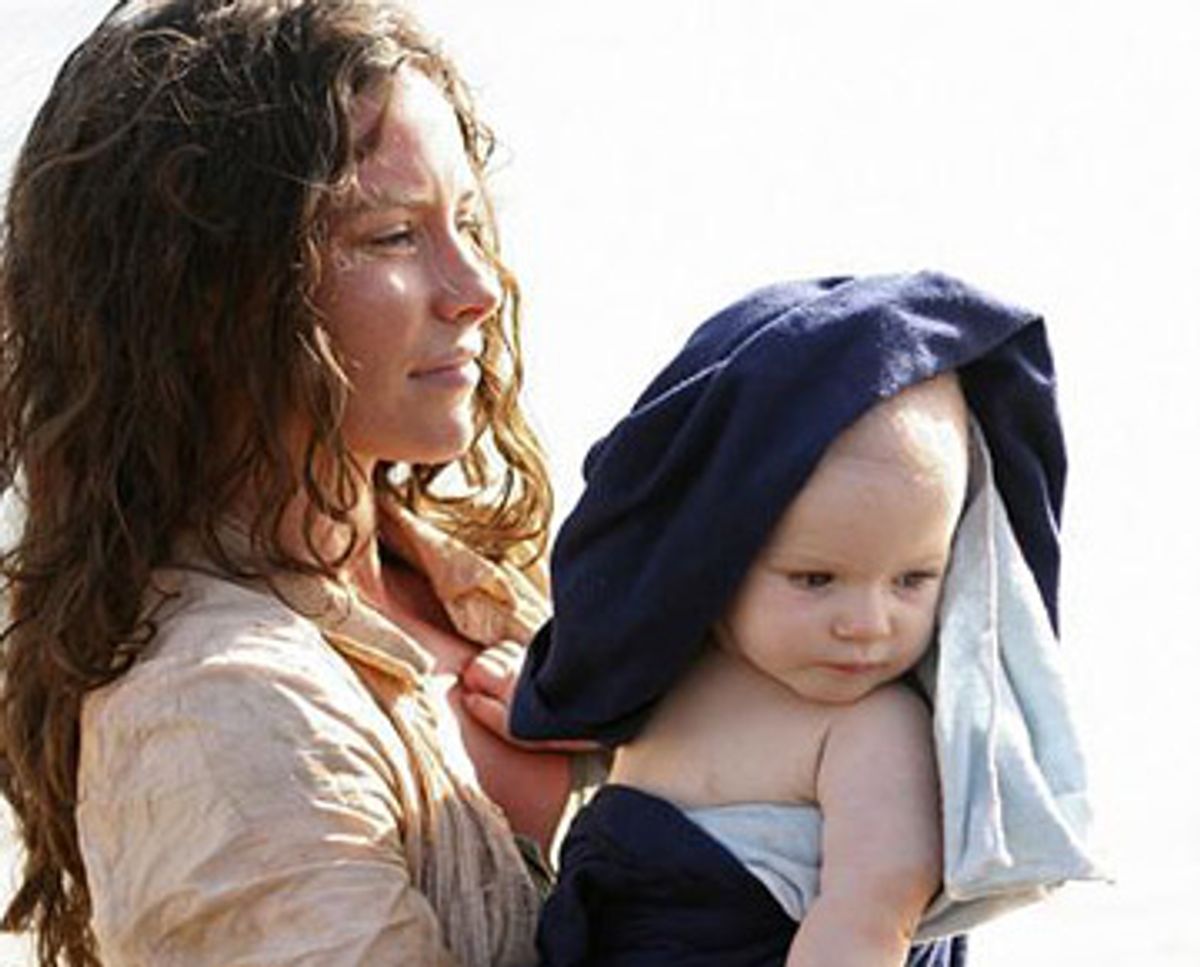 At the end of each season, "Lost" writers face a crucial dilemma: How much can they give away without losing the element of suspense? And how long can they tease us before we give up hope? Not everyone is as excited by tantric sex as Sting, and endlessly delaying satisfaction can work only for so long. Plenty of great series have been ruined by their inability to deal with a show's fundamental tension (Sam and Diane finally marrying on "Cheers" being a classic example) or by their inability to bring their wild scenarios to fruition (file under: "Twin Peaks"). But "Lost" has cleverly avoided this fate so far by creating a show with no real center and no single enigma. So each time a mystery is unveiled, another seems to spring out of it. And even better, this season the show proved that when a narrative device is getting weary -- the character flashbacks used so well for the first three seasons -- it's time to play with a new trick: the flash-forward.

Seeing into the future added a whole new wrinkle in time. Once again, we were disoriented. Each episode taunted us with juicy puzzle pieces, but we could never be sure when events were taking place, or whether they were happening at all. It was as if we were gathering fragments in our skirts and waiting for the moment when we could fit them all together.

The finale was that moment. Sort of. It opened with a flash-forward scene we had already glimpsed -- but so early in the season we couldn't make heads or tails of it -- of a melancholy, drug-addled Jack meeting Kate at an airfield. "We were not supposed to leave, Kate. We have to go back!" So is future Jack suffering from nostalgia for a paradise lost?

The problem is, it's never been quite clear whether the island was paradise or purgatory. Once the possibility of rescue appeared this season, a rift opened up between characters like Jack who wanted to escape and those like John Locke who wanted to stay, who believed the island was their destiny. And when you think about it, it's hard to say why most of them would want to return to reality (Jack's life back home was in shambles, Kate was a convict on the run, Claire was escaping from bad man and bad mojo, etc.), but for those transformed by the island, it seemed like a poignant chance at redemption.

And so, finally, "Lost" viewers got some release -- after enough beautifully choreographed action sequences to satisfy the most hyperactive 13-year-old, almost everyone remaining on the island came together in a violent collision. And somehow, after all these seasons of tribal warfare, the Survivors and the Others collaborated to ward off the psycho commando who had come to destroy them all.

After the dust has settled, Ben's creepy right-hand man -- Anthony Perkins look-alike Richard Alpert -- tells Ben he made an arrangement with Kate: "They help us free you, we let them off the island."

"Fair enough," Ben says reasonably. Which is odd, since Ben is the guy who has been spying on, manipulating and generally terrorizing the Survivors since they crashed. "The helicopter is yours. You and Sayid have a safe journey back," he tells Kate. "So we can go ... off the island?" She stutters. "That's ... it?"

Perhaps he just wanted to get the troublemakers off the island so that he could perform his next maneuver in peace -- because it was a doozy. In order to save the island from the clutches of his malevolent foe, Charles Widmore, Ben would have to take drastic action: As he announced in a previous episode, he would have to move the island. (I assume that all "Lost" skeptics have already lost interest and left the building, so I feel safe telling you that this idea is apparently not as wildly ludicrous as it sounds.)

Ben and his heir apparent John Locke are now in league on this project. In fact, they are 20,000 leagues under the ground, in one of those laboratories left behind by the long-deceased hippies of the Dharma Initiative. "Is this the magic box?" Locke asks with childish enthusiasm, so wide-eyed he looks, um, crazy. "What is all this stuff for?"

"Same things all the Dharma Stations are for: silly experiments," Ben answers disdainfully, handing him an orientation video that explains how the "Casimir effect" allows experiments in space and time. "Great care must be taken to avoid leaving inorganic materials inside the chamber," the voice from the video drones while Ben hurriedly stuffs the chamber in question with metal objects, like a naughty boy messing with a microwave (albeit a microwave that has the power to interrupt time and space).

The idea of disappearing the island to save it seems rather grandiose, but that's pretty much in keeping with the tone of the finale in general, which has a kind of fatal romanticism about it. Ben seems to be doing something noble with this mystical science trick. "Whoever moves the island can never come back," he tells Locke, before exiling himself from the place he loves and has ruled for so long.

The idea of sacrifice is threaded through the episode. Michael stays behind on the freighter to try to defuse a bomb. And Sawyer jumps out of a damaged and fuel-leaking rescue helicopter into the ocean to give Kate, Jack, Hurley and Desmond a better chance at escape -- though he never wanted to leave the island anyway, since it had allowed him to transform himself into a kind of heroic figure rather than the emotionally crippled criminal he was back home.

He may have made a good choice, because in the future things seem to suck for the characters -- dubbed "the Oceanic six" -- who got rescued: Jack is a scruffy-bearded drug addict, Kate is a puffy-faced single mom, Hugo is back in a mental institution, Sun is fixated on retribution, and Sayid is a widower and assassin whose boss is ... Ben. And all of them found that their return home required a different kind of sacrifice: They have vowed to lie about what happened to them, in order to protect everyone left on the island. Wherever the hell it is.

All the timeline tricks created a complicated and satisfying tension over the course of the season: Even though we gradually found out who the six survivors were, it wasn't at all clear how they would survive, and what would happen to separate them from the others. I found myself waiting for each of the not-chosen to perish, and some of them did -- or appeared to. The unreliability of the show's narrative means never having to say goodbye, because there's always a chance that some metaphysical mischief has been played. Maybe Charlie didn't really drown all those months ago? And perhaps Jin survived the explosion of the freighter, and will show up next season in some flash-forward? At least Desmond -- whom I had marked as a dead man -- survived to get his reunion with Penny Widmore, a moment so baited with romantic anticipation I couldn't help warming myself in their cinematic glow.

I'm sure the finale served up endless morsels of arcana for the "Lost"-obsessed. But it is the masterful combination of endlessly unraveling and reraveling plot, engrossing character study and sly humor that keeps me watching. The quips seemed especially welcome in this sometimes-bleak finale. When Sayid visits miserable Hurley in the loony bin, he tells him they are being watched. "Dude, I've been having regular conversation with dead people. The last thing I need is paranoia."

Of course, paranoia is exactly what we need, and get, watching "Lost." And plenty of new mini-mysteries popped up as fodder for next season: Who the hell is that red-headed scientist Charlotte? What happened to Claire, and why is she hanging out in a spooky cabin in the woods with the ghost of her dad? Where did Sun get enough cash to take over her father's corporation? And then there is the deliciously over-the-top final scene, in which Ben tells Jack that he must return to the island -- but there's a catch. "I'm here to tell you the island won't let you come alone. All of you have to come back." He nods to the corpse of John Locke they happen to be standing beside. "We're going to have to bring him too."

This might be the nuttiest final scene ever in a series finale -- the characters spent three seasons trying to get off the island and they're going to spend the next three trying to get back on? But it makes me love "Lost's" writers all the more, this sneaky nod to the supernatural dexterity with which they keep us ensnared in their web, seducing us into making giant leaps of faith, skirting so close to preposterousness but pulling it off each and every time. Here's hoping they can do it again next year.