Text-messaging has made the late-night drunken hookup insanely easy. 2 EZ? 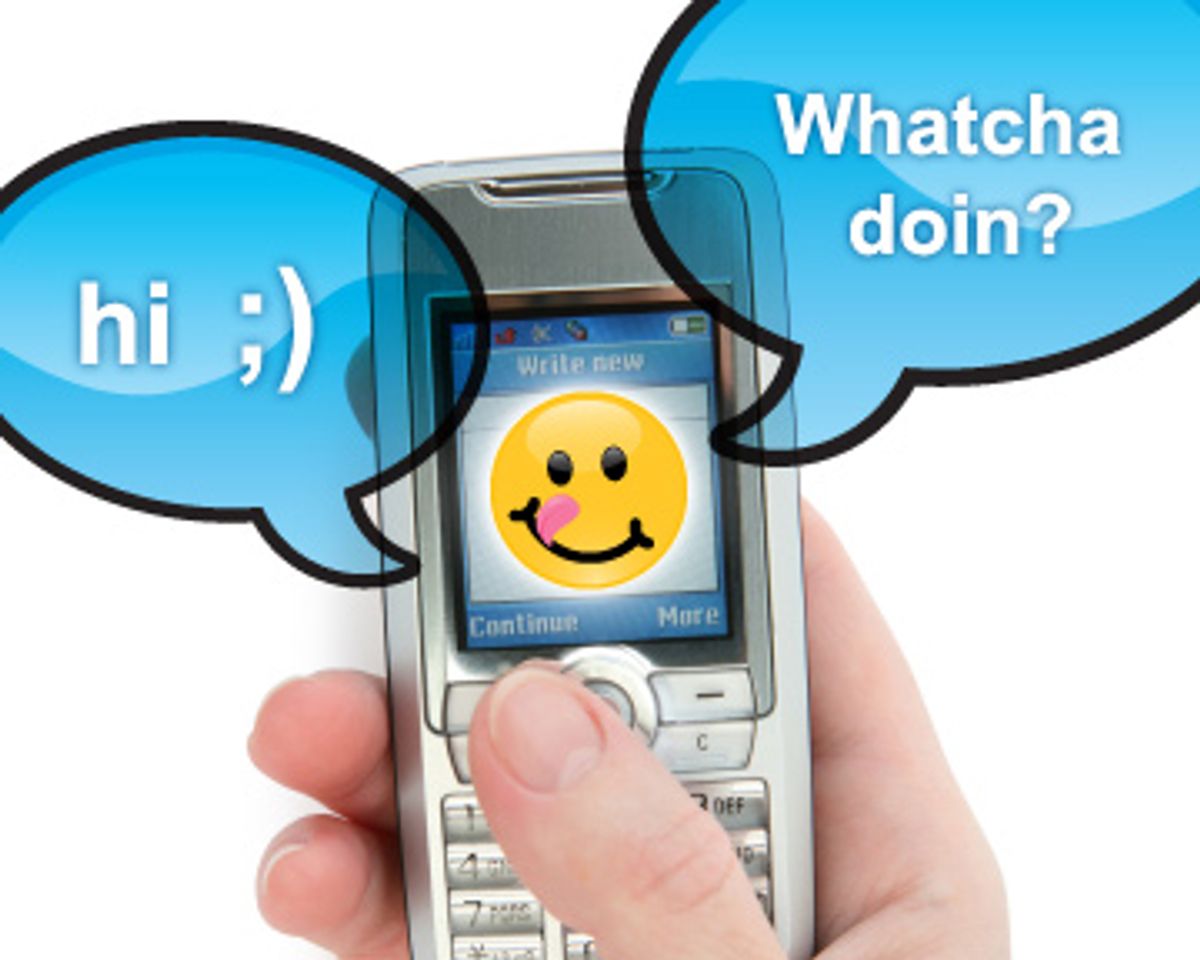 I was seeing this guy who would send me text messages in the middle of the night. This might indicate a few other things about him, his love of booze and booty calls chief among them. It got so that when I heard that little double beep at midnight on a Tuesday, or 3 a.m. on a Saturday, I didn't even check to see who it was. I'd wake up the next morning to find these drunken dispatches from him, a last-call Hail Mary. "Whatcha doin?" "U still up?" All of which were variations on one crucial question: "Can I sleep with you?" I guess I'm old-fashioned; I like a guy to e-mail first.

I came late to text-messaging, and part of me never fully bought the hype. I don't have a BlackBerry, or a Treo, or an iPhone; my cellphone is so old they don't even make replacement parts, and typing out a message can feel a bit like chiseling it in stone. A while ago, I was sloooowly etching out a question to a friend at a bar -- clink, clink, clink -- when someone leaned over my shoulder. "Aww," he said, "did you just learn to do that?"

Part of the problem is that I'm an annoying grammar snoot who refuses to abbreviate. I find it offensive to collapse the English language into emoticons and acronyms. I think text messaging has indulged everyone's worst impulses to ignore spelling and disregard punctuation. I'm a former English teacher; I've had throwdowns about the serial comma, and I used to 86 a guy if he misspelled "a lot." What am I supposed to do with "l8er" and "sez"?

I admit, text messaging has its uses: "5 min. late," "I'm here," "Address again?" -- these are the dispatches that befit such tone-deaf technology. But things have gotten out of control. A few months ago, a 31-year-old friend of mine told me a long story about a guy she was dating, and I swear the only verb she used was "text." Lately, when I'm out to dinner with single girlfriends, many of whom are also in their early 30s, there comes a point in the evening when I am staring at the parts in their hair while they click away on their keypads. By the time dessert is served, they all have dates for later that night.

Sure, it's kind of amazing that you can send flirty messages back and forth from the dinner table without your pork tenderloin going cold. And it's kind of amazing that someone's trousers are buzzing the moment you hit send. It's so easy, so incredibly easy to hook up with someone -- no advance warning necessary, not a single word spoken. Of course, that's the part that bothers me, too. Like, what happened to a date? What happened to calling? To planning in advance? I realize this will open me to ridicule. I realize this is my Andy Rooney moment. Back in my day, you had to walk a mile in Doc Martens to send a fax!

Which doesn't mean I don't text-message men. That takes me back to the guy I was telling you about earlier. Let's call him Scott. About three months ago, I ran into Scott, who is charming and adorable and something of a scoundrel. We chatted and exchanged numbers, whatever, blah-blah. Later that week, I was five pints into an evening with friends and feeling the impatient, irrational call to action of someone who overstayed her welcome on the bar stool. Here's an idea, I thought: I should call Scott! But I was too shy, or too slurry, to actually make a phone call. What I could easily do -- well, what I could do with one eye squinted a bit -- was to type out a note to him and toss it to the satellites. I like to think what I wrote was clever and funny. I suspect it was, "Whatcha doin?"

He was there in less than 30 minutes. Like a pizza.

It was brilliant. So fast! So simple! If only everything in life could be so complication-free. I have always been the girl who wants to keep the party going, who doesn't want to go home when the bar lights cruelly flicker on. I would never dream of calling someone at 2 a.m. -- OK, I would, and I have, and I'm sorry -- but suddenly, with text messaging, I could just send an unobtrusive "You still out?" to the call list and voilà: instant after-party.

A few days later, Scott texted me at 2 a.m., and I redirected my taxi to his place.

So here's the problem: There's a reason why drunk-dialing someone at 2 a.m. invokes shame and embarrassment. It's because we probably shouldn't be doing it. What we should be doing is taking our asses home, drinking half a bottle of Gatorade and crashing into bed. My drunk self really doesn't need new and improved ways to stay out later, to get into more trouble, to do things I will ultimately regret. Maybe it shouldn't be so easy to get into someone's bedroom at 2 a.m.

For weeks after our late-night rendezvous, Scott would text me in the middle of the night. It didn't matter if I never responded; I would still wake up at least twice a week to find some note from him, shot off at 3 a.m. I vacillated between marveling at his persistence and feeling annoyed by it. After a few weeks of this, it began to dawn on me that these texts were not the personalized messages I had once imagined. (Perhaps you figured this out a while ago. Where were you last month, smarty-pants?) They were probably sent out to a rotating cast of women who were drunk enough, or bored enough, to actually respond. Who were these girls? And was the answer really (really?): Sometimes me?

The other day I asked my friend why she liked to text-message so much. She told me she felt nervous and tongue-tied on the phone, and she liked the way text messages allowed her to be quick and flirty and sly. I asked a male friend the same question, and he told me a story about sending a "perfect text." (It involved a sexual double entendre on the Playstation 3.) The text message is all about the zinger, the crack of the quip, which has its own appeal. Sure, maybe my friends hated the emoticon, maybe they learned to dismiss the bad grammar and the crunched, vowel-less nouns, but none of that was the point, really. What they said about text messaging was no different than what I have always said about e-mail, what my mother might have said about the long missives she once sent to my father: It allowed them to be their better selves, the clever/unflappable/devastating people we all want to be in the calamitous first throes of love.

Still, it would be nice if they could do that in proper English.

Recently, I met a guy I really like. He happens to live in another city, so I don't see him much. We've e-mailed. We've text-messaged. We've talked on the phone. I like all of it, frankly, because when you're fond of someone, any word from them makes you smile. But I did something unusual the other day, just for the hell of it. It was something I hadn't done in years. And because I hadn't done it in so long, it felt new and weird and exciting.

I sat down with my legal pad, and I wrote him a letter.