Looking for payoff in Iraq

Winning "hearts and minds" is in some sense like a seduction. But what happens if American largesse here runs out? 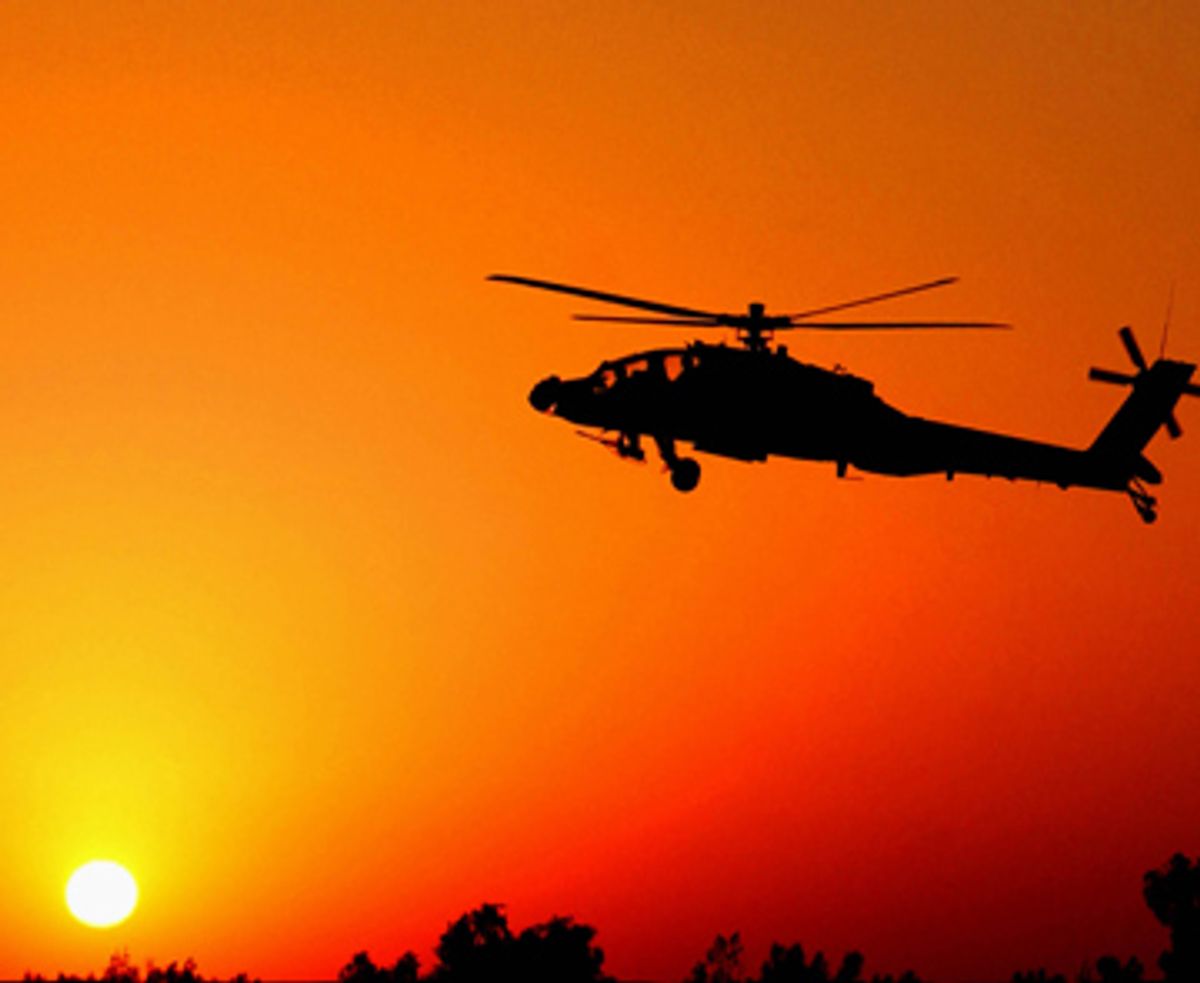 At Camp Taji, about 12 miles north of Baghdad, Capt. Geronimo of the 25th Infantry's 1st Brigade Combat Team tells me: "Tomorrow morning you'll be going to a meeting of Taji's qada. A qada is a kind of county. That means you'll be able to see how we cooperate with the locals. That's what you wanted to see, wasn't it?"

That, above all, I believe, is what the U.S. military wants me to see -- cooperation, progress with reconstruction. But it doesn't matter: Reality comes trickling through everywhere in Iraq. (And it is something I really do want to see.)

In fall 2007 I'd visited Dutch troops stationed in Afghanistan's Oruzgan Province, to see how the process of reconstruction was going there. Despite the threat of a suicide attack, we passed out fliers in the town of Tarin Kowt, calling on the local population to pass along information to the NATO troops concerning the location of IEDs (improvised explosive devices). Back at the base, the major who had accompanied me there the whole time asked: "So, what did you people see?" One soldier answered: "The children took the fliers and tore them up, and some of the grown-ups did too." To which the major replied: "The good news, though, is that they took the fliers."

One morning we leave Camp Taji in an MRAP (mine resistant ambush protected) vehicle; according to the Army, it is the premier armored personnel carrier. Capt. Geronimo comes out to say goodbye. As I crawl into the vehicle he calls out: "In an MRAP, if you hit an IED you've got a good chance of surviving."

The qada meeting is being held in an unobtrusive but relatively well-kept-up building in Taji. The Americans are the first to arrive. The troops outside stand guard over the building.

In the meeting hall itself is a long table still wrapped in plastic, in an attempt, I believe, to win the battle against dust and sand. The Americans don't sit down at the table, but in chairs ringing the table farther out in the room, making it look as though they're the audience that will soon be watching a play put on by the Iraqis.

"That," explains Capt. Bryant, "is because we don't want to intrude."

I'm introduced to a female Iraqi interpreter known as Michelle (not her real name). She's excited; her visa application seems to be coming along well. Soon she will be invited to the American embassy in Jordan for an interview. An American officer she's worked with in Iraq is sponsoring her request for a visa. From what she tells me, I understand that all she needs now is a Western man to marry. In her case, at least, the seduction seems to be going perfectly. The prospect of a U.S. green card or passport works wonders: Of all the 10 or so interpreters I spoke to in Iraq, only one said he wanted to stay in the country, because he felt Iraq was headed for a glorious future. All the others had their sights set hopefully on settling down in America.

Finally, everyone has arrived. About 18 Iraqi men are gathered around the conference table. Extremely sweet tea is served, to the Americans as well.

I'm sitting beside Lt. Col. Wilson, who is from Brooklyn, N.Y. He's carrying photos of most of the Iraqis present. But occasionally he turns to Capt. Bryant and asks doubtfully: "Who was that guy again?" I'm reminded of restaurants in Tokyo where the Westerner, in lieu of a menu, is handed a book of photos and orders by pointing at a picture.

Michelle makes a brave attempt to translate everything that is said but, even taking into account that a great deal gets lost in translation, the meeting seems completely chaotic. After a discussion about irrigation, the subject suddenly jumps to a bridge that must be built, and then another engineer launches into an account of the illegal tapping-off of electricity. The longer the meeting lasts, the more frequently one hears the expression "inshallah," or, roughly, "God willing." Suddenly, one Iraqi calls out: "But we don't have enough medicine for the animals." No one bats an eye.

Could I be the only one who doesn't know which animals or what medicines he's talking about? Something about this reminds me of Ionesco's "The Bald Soprano," which incorporated dialogue taken from an English textbook for beginners. One interpreter explains to the Americans that he can't listen and interpret at the same time, because then he misses important things that are being said. Lt. Col. Wilson asks for no further explanation, but he doesn't look pleased.

Soon the meeting is called to an end. The sweet tea was very good. I feel like I've been watching rehearsals by an amateur theater group, with the Americans doing their best to direct, gently and discreetly.

The next day I go with the 1st Platoon from the JSS (Joint Security Station) Saba al-Bor to the nearby village of Ali Hamed. Boredom and fatigue bubble up among the soldiers. Lt. Mike Kaness, a thickset young man from upstate New York, is being teased by his men. "You could hold a pencil under your tits," one of them shouts. "You got cleavage."

"Don't be stupid," the lieutenant shouts back. "Cleavage isn't under your tits, it's on top of them."

Along with the platoon, we pay a visit to the house of Sheik Hussein Ali Hamid al-Lehebi. First we pass out toys and chocolate to the children. The concept of toys is subject to broader interpretation here; from the box, the soldiers also produce paper-hole punches.

Once all the toys have been passed out, Lt. Kaness asks the sheik what his village needs. "Would you like us to pave the road, for a kilometer or so?" the lieutenant suggests.

"Which side of the road, right or left?"

The sheik thinks about it for a moment. "The right side."

Then the platoon visits all the shops in the village. First a little greengrocer's. "What do you need?" the lieutenant asks. "What kind of things don't you have?"

No reply. "What about new freezers?"

If the lieutenant had instead offered him 200 carrier pigeons, I believe the shopkeeper would have found that an excellent idea as well.

Compared with the way the Dutch go about it in Afghanistan, this is a very different kettle of fish. The Dutch are prone to haggle over giving a flashlight to a police station. Meanwhile, I can't help wondering if there are shopkeepers in America who wouldn't mind being presented with a new freezer as well.

After we've been to all the shops in Ali Hamed, the sheik presents us with a lunch of lamb kebab, chicken, tomato salad and Iraqi pickles. The fare in the U.S. chow hall pales by comparison. From the looks of things, America, at least in this part of the notorious "Sunni Triangle," is pretty good at acquiring love from the Iraqis.

"Do you trust these sheiks -- sheiks in general?" I ask Lt. Kaness.

"Most sheiks are two-faced," he replies.

"Aren't you afraid then that sooner or later your money will end up with the insurgents?"

"So far things are going well," he says.

After lunch we get ready to go back to JSS Saba al-Bor. The Americans thank the sheik, but not very convincingly. It's as though we had a right to a delicious meal after all we'd done for his village.

A few days later Lt. Col. Thomas Mackey and I attend a meeting of all the local sheiks at the "Sheik Support Center."

"What was the turning point here?" I ask Mackey.

"The Sons of Iraq Movement," he says. "Formerly known as Concerned Local Citizens. The boys and men who used to be paid by the insurgents and who fought for them are now Sons of Iraq. They help the Iraqi police, the Iraqi army, or they guard checkpoints. They get paid for it. We've given them an alternative. And they were also tired of fighting."

Just before the meeting starts, an Iraqi comes up to Lt. Col. Mackey. "I want to give you something," the Iraqi says. "Because we're brothers." The man holds up a ring.

"I'm afraid I can't accept that," the American says.

"Don't accept it," whispers an interpreter known as Adam. (Because of the dangers of aiding the U.S., all the local interpreters in Iraq use fake Western names -- sometimes even ones like "Snoop Dogg" or "DJ Quickie.") "This man wants to influence you. Don't take it."

Later, Adam heaves a sigh. He tells me that he thinks Lt. Col. Mackey took the ring anyway -- perhaps because to turn it down would have been an insult to the Iraqi man.

In Iraq, the Americans are not the only ones who pay to win hearts and minds. And until now, the exchange of money and goods for tranquility and peace seems to be working, at least in some areas. But the question remains: What will happen when the payment stops?

"Of course that works," the diplomat continues. "Behind the insurgency there isn't so much ideology. What's behind it is a whole lot of economy."

Translated from the Dutch by Sam Garrett.

Arnon Grunberg was born in Amsterdam and published his first novel at the age of 23. His most recent novel, "The Jewish Messiah," was recently published by Penguin Press. His work (novels, plays, stories and essays) has been translated into 23 languages. Grunberg currently lives in New York. Visit him on the web here.