"Mother of Tears: The Third Mother" 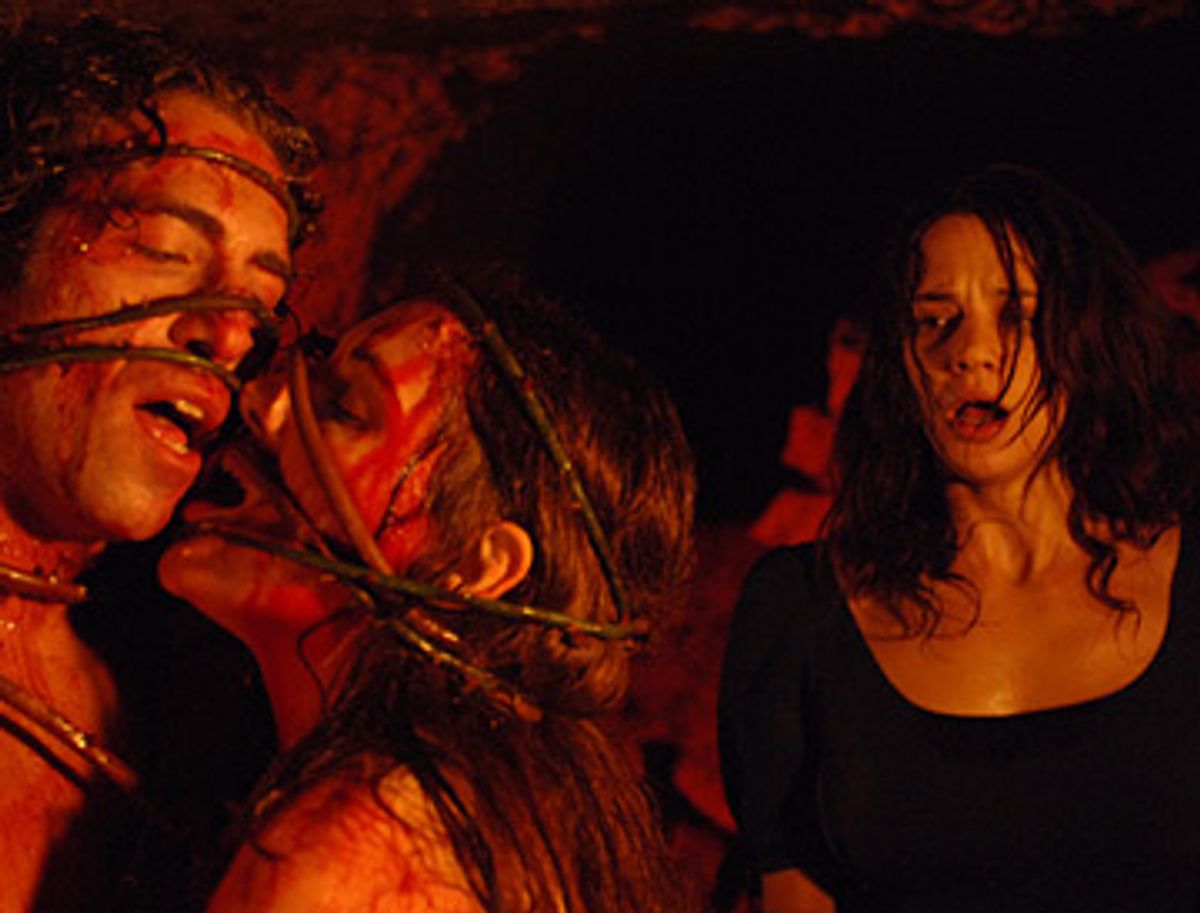 We've lost something in the culture of horror movies when a good, solid evisceration at the hands of slobbery, bloodthirsty demons has come to seem old-timey and quaint, a comforting relic of drive-in gorefests and '70s-era Times Square double features. Dario Argento's "Mother of Tears" features one such evisceration, in the movie's first 10 minutes no less. (The unfortunate victim is strangled with her own entrails, a nutso stylistic touch that's the horror-movie equivalent of tying a bright scarf around your neck to liven up a dull outfit.) "Mother of Tears" features other assorted dashes of sick, twisted ingenuity -- a semi-medieval eyeball-stabbing device; a deep slash of a neck wound that causes the victim's head to flap around as if on a hinge -- that may make you wish you'd hung onto that "Mark of the Devil" barf bag. "Mother of Tears" is depraved, bloody and unrepentantly exploitive, and the plot makes virtually no sense -- it's the sort of movie nobody, save Argento himself, is crazy enough to make these days. It's also so full of life that it dwarfs contemporary horror pictures of the "Saw" and "Hostel" variety. Argento -- who is now 67 and who made his first movie, "The Bird With the Crystal Plumage," in 1970 -- has no interest in nihilism: Instead he goes for the gusto, with tooth and claw.

"Mother of Tears" is the third movie in a so-called trilogy, but it's best not to worry too much about what that means -- Argento (who co-wrote the script with several other writers) obviously didn't. Asia Argento (Dario's daughter) plays Sarah Mandy, a young woman whose life becomes a nightmare when a sealed stone urn shows up at the Rome museum where she works. Even though the urn is addressed to the museum curator, Michael (Adam James), who is also Sarah's boyfriend, a curious colleague can't resist opening it right away, and that's when the trouble begins. Inside are three ugly stone statues and a pagan ceremonial garment, which looks suspiciously like a cutoff sweat shirt trimmed with glitter glue. But this is one powerful piece of workout wear: It will awaken a leggy supermodel named Mater Lacrimarum (Moran Atias), aka the Third Mother, the last of three powerful witches who, for centuries, spread fear, mayhem and destruction around the world. The other two witches gave up the ghost in the previous pictures in this "trilogy": At one point a character makes a reference to a "dancer named Suzy Bannion," the witch-killer played by Jessica Harper in Argento's 1977 Beaux-Arts head trip "Suspiria"; the second mother bit the dust in Argento's 1980 "Inferno." Now that the Third Mother has been awakened from her long beauty sleep, she summons numerous underling witches from around the world. They descend on Rome, decked out in an assortment of '80s-style ruffled skirts and raggedy lace head wraps, and preside gleefully over a city gone mad: Thanks to the Third Mother's rebirth, the citizens of Rome have begun committing terrible and inexplicable crimes, as if they were possessed by the devil himself.

It's Sarah's job to stop this unspeakable evil -- but how? The answer (or part of it), lies in a little gizmo that looks like something you could buy at the Estée Lauder counter at Macy's, but never mind. "Mother of Tears" is packed with clumsy dialogue, and it was filmed in Torino with a budget of about 29 cents. I suspect hardcore Argento fans are hoping "Mother of Tears" will be a return to form, a picture in the style of, say, "Suspiria." That's setting the bar too high: Although "Mother of Tears" is of a piece with other Argento films, particularly in its use of elaborate set pieces, it's not nearly as stylish, fanciful or elegant as the movies Argento made in his glory days, the '70s and '80s, like "Bird With the Crystal Plumage" and "Four Flies on Grey Velvet." "Mother of Tears" is more blunt, more bloody, and possibly more urgent than those earlier pictures. Still, there's an aura of thrift-shop sophistication about it. Shot by Frederic Fasano, the picture has a moody, atmospheric sheen. None of that muted, "Se7en"-style, scratched-emulsion folderol for Argento: When blood flows in "Mother of Tears," it's a rich, vital red. And even though Argento clearly didn't have a lot of money for costumes, you still see flashes of style here and there, in the way a character might drape a scarf around the lapels of her trench coat, or in the sharply tailored suits worn by the stonily handsome Italian detective (Cristian Solimeo) who's been assigned to track Sarah's whereabouts.

I don't want to undersell the gruesome nature of "Mother of Tears": I've seen it twice now, and there are still about 30 seconds of it that I've been able to watch only through my fingers. There's a bloody orgy, and an instance of what one of my colleagues calls "the old pike up the vag" -- but as horrific as it is to watch, it's nothing like the sadistic thrills offered by so many contemporary horror movies, in which we're supposed to half-relish, half-dread the characters' protracted suffering. Argento's violence may be brutal, but it's efficient: He swoops in and gets the job done. Before you know it, he's on to the next thing.

Maybe that's part of why "Mother of Tears" seems retrograde and fresh at once. There are no endangered teens on deserted roads, or sicko rednecks presiding over sheds full of rusty farm tools. Argento prefers the classic push-and-pull of good against evil, of the past against the present. (And, it should be noted, he sure likes nudity.) He casts professional Eurotrash icon Udo Kier as a doomed priest; Argento's former partner (and Asia's mother), Daria Nicolodi, plays the ghost of Sarah's dead mother, who appears to her in a dreamy mist, trying to help her eradicate that pesky last mother. "Mother of Tears" isn't all about gore, and it does have a soul in Asia Argento: Her rubbery, expressive features, and those devastating mood-ring eyes, mark her not as a great beauty but as something much better: an interesting one. This bold, slightly terrifying actress is our guide through "Mother of Tears," with its orgies and its eviscerations, its dutiful priests and its power-crazed witches. When she looks scared, you know things are bad -- but you can bet you'll never catch her peeking from between her fingers.