Democrats, put down your swords

Mourn defeat, yes, but the destruction wreaked by the Bush administration leaves little room for factional fights and identity politics between today and Nov. 4. 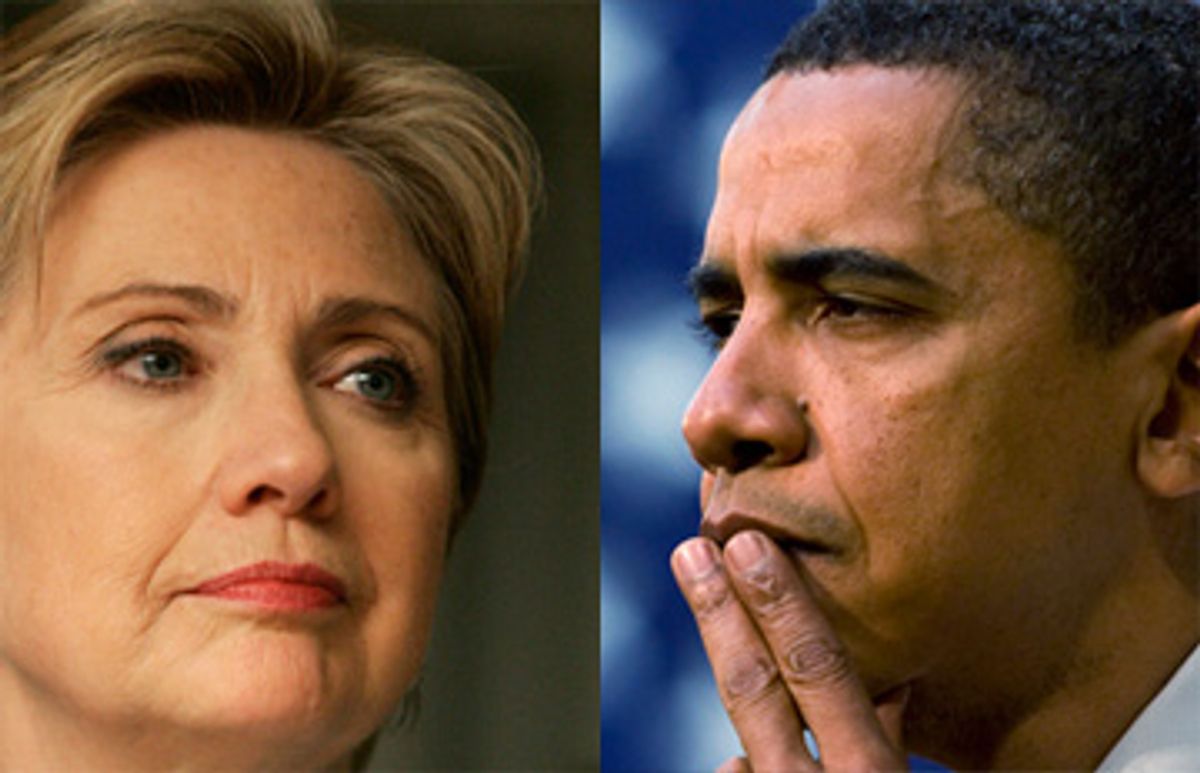 For Democrats of all persuasions, the conclusion of the primaries should encourage reflection rather than recrimination. Now is the time to listen to the calm counsel that cannot be heard amid the roar of combat, and to think.

Hillary Clinton needs to think about how best to preserve the gains of her campaign without spoiling it all. Barack Obama must consider how best to unite his party while making choices, including a running mate, true to his own instincts and style. Meanwhile their supporters can take deep breaths and try to imagine how they will feel on Nov. 5 if John McCain has won the presidency.

Nothing could be more naive than to expect politics to be governed by the golden rule, even within a party whose leaders and activists are supposed to share the same ideals. But as a mental exercise, I suggest that the supporters of Clinton and Obama consider how they would wish their adversaries to behave if their positions were reversed -- if somehow she had narrowly defeated him instead of the way things actually turned out.

It is natural to mourn in defeat. But when the tears dry, there will still be an election ahead with the profoundest consequences for women, minorities, working families of all complexions and creeds and, for that matter, the rest of the world, too. The destruction wreaked by the Bush administration leaves little room for indulgence in factional fights and identity politics between today and Election Day.

Reason begins with recognition that Obama won the Democratic nomination fairly, according to the laws and rules that have governed the party for years and that all the candidates accepted when this cycle began. He raised more money than Clinton -- despite early boasts from her camp that its fundraising alone would ensure her nomination -- and organized his campaign more methodically, more strategically and more effectively than she did. He recognized that the political atmosphere in America had changed, and she didn't, or at least not until too late.

Certainly Obama benefited from the misogyny and churlishness of the recidivist Clinton bashers in the media, and from the broader sexism of our culture. But he can no more be held responsible for their deplorable existence than Clinton can be blamed for the racism that motivated some of her voters. His campaign could have behaved more thoughtfully and consistently at certain moments, but again -- in keeping with our thought experiment -- the same can be said of hers.

If the Clinton supporters must acknowledge that his victory is legitimate and untainted by the bad behavior of others, then the Obama supporters ought to refrain from demanding total and immediate surrender. Assuming that she will concede on Saturday, Clinton should strive to match the magnanimity of Obama's wonderful speech Tuesday evening. And her supporters might as well turn off the counterproductive campaign for the vice-presidential nomination, which only makes that option less attractive and more burdensome. Over the past few days, Clinton seems to have realized that trying to negotiate with her party's nominee only makes her look presumptuous and him look weak.

Still, there would be nothing wrong with Clinton's keeping her delegates intact until the convention, and even going through a roll-call vote that she will lose, simply to record how close a woman came to winning this race -- so long as it is she who then rises to move that the convention nominate Obama unanimously by acclamation. She has earned that honor.

No doubt the most fervent Clinton supporters will feel disappointed and perhaps even cheated by fate for weeks to come. They ought to pick up their heads and look around at a world that is simply amazed at what America has done. They ought to realize that whatever they have disliked about Obama or his campaign is trivial compared with the fulfillment of aspirations that can be traced all the way back to 1872, when Victoria Woodhull and Frederick Douglass ran together on the Equal Rights Party ticket.

The Clintons, along with many of the activists closest to them, are veterans of the civil rights struggle, notably Harold Ickes, the hard-bitten lawyer and advisor who was nearly beaten to death by a racist gang in Mississippi more than 40 years ago while trying to register black voters. What Obama represents is a future for which they fought valiantly before he was born. It is ironic, of course, that the price of that triumph has turned out to be so high for them personally.

But with time they and their friends shall come to realize that as bitter as losing always is, there could be far worse ways to lose than this.