"You Don't Mess With the Zohan"

Despite the bare butts and crude sex jokes -- or because of them -- this Adam Sandler vehicle addresses some of the biggest political problems of our time. 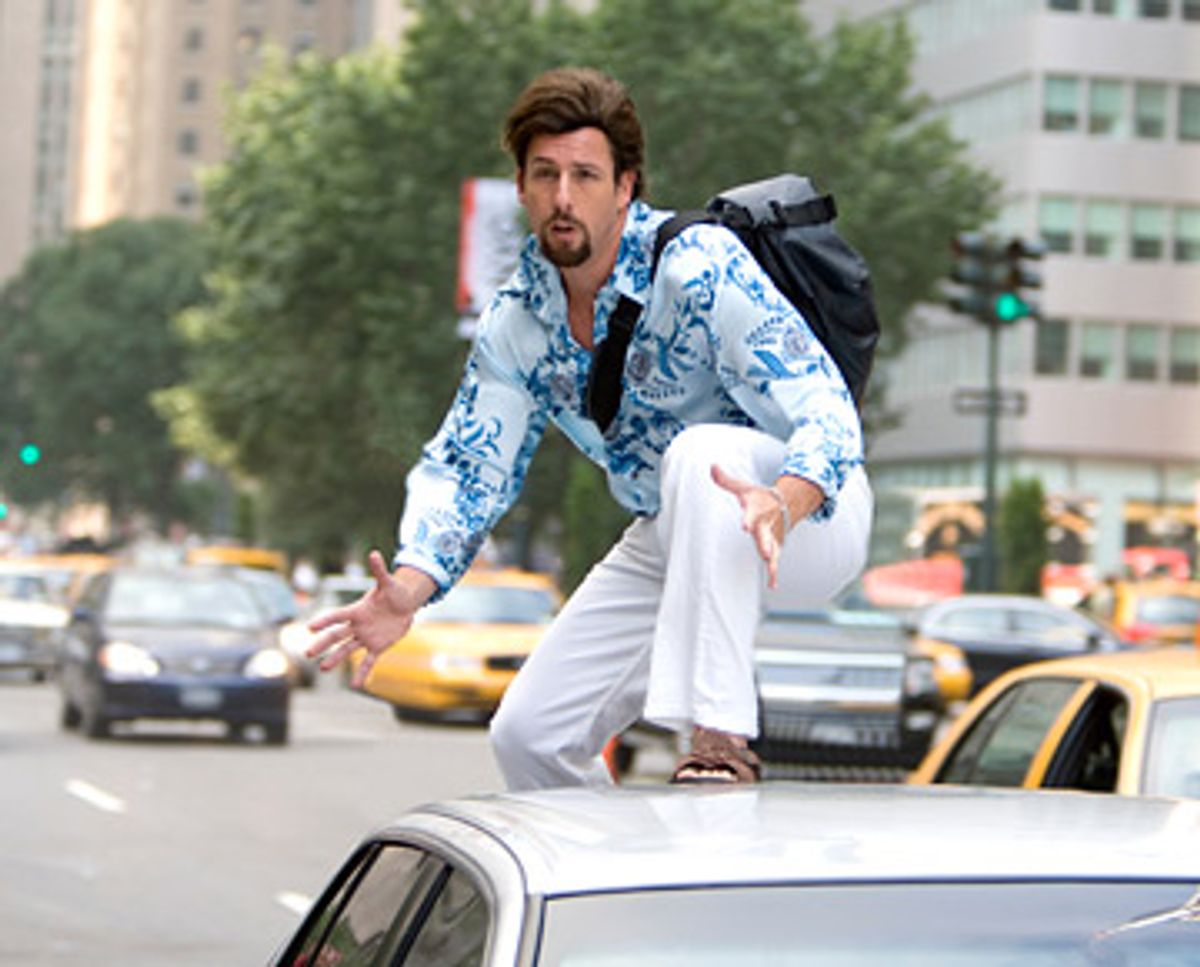 "You Don't Mess With the Zohan" -- in which Adam Sandler plays an Israeli counterterrorist commando whose big dream is to become a hairdresser -- is the movie "Munich" should have been. At the very least, it's got to be the first picture to use smelly-feet jokes as a means of parsing the Israeli-Palestinian conflict. But more than that, it's a mainstream movie that dares to make jokes about the kinds of complex political realities that most of us don't dare bring up at dinner parties. And while it doesn't attempt to offer any viable diplomatic solution (you won't see Sandler accepting the Nobel Peace Prize anytime soon, or ever), it makes a valiant effort to bridge a gap that most of us, dispiritingly, have come to believe is unbridgeable. When Zohan's mother, played by the saucy, sunny Dina Doronne, urges him to stay in the army, she professes to see some light at the end of this very long, dark tunnel: "They've been fighting for 2,000 years, it can't be much longer." The stark reality is that it probably will be.

But that isn't going to stop Sandler from proffering this bold, optimistic olive branch, one that attempts to show that, since Arabs and Jews have learned to get along (at least reasonably well) in New York, their problems in the Middle East can't be unsolvable. No matter where you stand on Adam Sandler -- with his extremely profitable blend of crudeness and self-effacing regular-guy sweetness -- there's no denying the audacity of Sandler's basic idea (he co-wrote the script with Robert Smigel and the ubiquitous Judd Apatow; Dennis Dugan is the director), or the pleasure he takes in poking fun at both sides, even as he extends a degree of sympathy to each one.

"You Don't Mess With the Zohan" opens with the brawny, bronzed, curly-haired Zohan, dressed in stubby thick-soled leather sandals and conspicuously bulging shorts, wowing the babes at an Israeli beach. Possessed of near-superhuman strength and agility, he's a whiz at hacky sack and tug-of-war games; that's because he's not just a beach bum but a highly trained operative in the Israeli army (the movie never utters the term "Mossad," but the implication is there). The unfortunate bummer is that his bosses are cutting his beach holiday short so he can recapture a wily Palestinian terrorist known as The Phantom (John Turturro).

But Zohan is a lover, not a fighter. His parents, played by Doronne and Shelley Berman (who has some absurd, wonderful bits involving dollops of hummus), know how much he really wants to be a hairdresser, a dream they don't fully support -- not least because Dad is certain it marks him as a "fegelah." Zohan won't be deterred. He's spent countless hours studying a 1980s Paul Mitchell hairstyling manual, and even though he's had no formal training, he's fully confident that there's no mullet he can't master. After he finds a way to make it to New York, he realizes his dream isn't so easy to achieve. But he does get a foot in the door at a salon run by a stunning, charming Palestinian woman, Dalia (Emmanuelle Chrigui), and he eventually becomes the salon's most popular stylist, in part because he has so much sexual energy that he happily services all the older ladies -- once he's finished fashioning their hair into weirdly flattering retro-'80s styles.

Zohan learns that he can't escape his past -- or his homeland's past -- just by switching countries. "Zohan" never attempts to simplify the Israeli-Palestinian conflict: If anything, it acknowledges the ways in which that conflict is both political and religious, deeply personal and nothing personal. When one of Zohan's newfound New York friends, an electronics-store employee named Oori (Ido Mosseri), first suggests he try to get a job at Dalia's salon, he notes that it's on the Palestinian side of the street: This is a movie where businesspeople with deep-rooted religious and political differences are symbolically lined up directly across from one another. Zohan resists: "I've already done enough to my parents!" -- a way of acknowledging that old wounds, on both sides, run so deep through so many generations, that it's impossible to accurately trace their genesis. In a later scene, a group of clumsy would-be terrorists led by an embittered cab driver (played by Rob Schneider) sit around a kitchen table plotting Zohan's capture. Their motivation isn't so much political (it can actually be traced to a stolen goat), but still, they tap the expertise available to them by calling a "Hezbollah hotline," where a friendly female voice greets them with the words, "For terrorist supplies, press 1."

Sandler is one of the most popular mainstream comedians working -- and how many mainstream comedians are willing to put Hezbollah gags in their movies? Even the movie's casting reflects a desire to both revel in stereotypes and break them down: In "Zohan," Sandler is a Jew playing a Jew, but we also get another Jew (Schneider), an Italian-American (Turturro) and a Canadian of Jewish French Moroccan descent (Chriqui) playing Arabs. Dugan has also cast a large number of Israeli and Arab actors, among them Mosseri and Sayed Badreya, who plays a cab driver who almost becomes a terrorist, although it's clear he just doesn't have it in him. In the movie's press notes, the Egyptian-born Badreya says that when he came to the States in 1979, the only jobs available to him were roles as terrorists. Because he was "young and fit and too good-looking" to play a terrorist, he grew a beard and gained weight, and got work right away. "Since then, for 20 years, I've had one line in every movie I've been in: 'In the name of Allah, I kill you all.'"

Almost no one I've talked to in the days since I've seen "Zohan" can believe that the thing is any good, and the picture does have some problems: It's badly in need of streamlining -- like so many modern comedies, it sags in the middle, and there are plenty of lesser jokes that could have been easily excised. But the movie's tone is what's most surprising about it: Even though it's essentially sweet-natured, there's some ruthlessness at its heart. Its ultimate plea is that both sides need to cut out the nonsense, once and for all. Sandler's performance here is both ridiculous and winning: Instead of coasting, as he usually does, on his aw-shucks boyishness, he clearly has a good time amping it up as an English-mangling sex god. (He gets a great malapropism with the line, "Stick a fork in the fat lady; it's done! She's eaten.")

No Adam Sandler movie is free of crude humor: Here, that includes numerous bare butts (including a pretty nice-looking one, belonging to Lainie Kazan, whose character is one of Zohan's friends and benefactors) and sequences in which Zohan grinds against the older ladies who make up his clientele (invariably, they squeal with delight). Stupid jokes don't need to serve a higher purpose, but it's possible that the dumb Sandleresque gags here help keep the movie from being too preachy or aggressively earnest.

And there's nothing more offensive in "Zohan" than the sequence in "Munich" in which Eric Bana -- as a Mossad agent who's trying to escape the violence of his past -- makes love to his wife, as flashbacks of the murders of the Israeli Olympic team in 1972 in Munich run through his head. "Munich" was a fictionalized story set against a real-life backdrop of tragedy: Bana plays an agent assigned to avenge the kidnapping and murder of 11 members of the Israeli Olympic team by the Palestinian terrorist group Black September. In "Munich" -- its first half, at least -- Steven Spielberg attempts to wrestle with some morally ambiguous issues, particularly the question of whether violence is ever morally justified, or necessary. But Spielberg tiptoes up to the complexity of those issues only to pull back from the edge. And his conclusion -- "Violence begets violence" -- isn't particularly enlightening or deep.

"Don't Mess With the Zohan" is the braver movie, for the way Sandler uses throwaway humor in the service of a strong point of view. "Zohan" never even addresses the viability of violence as a solution. It posits, from the start, that the only way to solve this seemingly unsolvable conflict is by forging human connections. You can tsk-tsk Sandler's penchant for dumb, crass humor all you want, but there's some meaning behind his madness. Is there nothing more human, more humbling, than the idea of smelly feet?