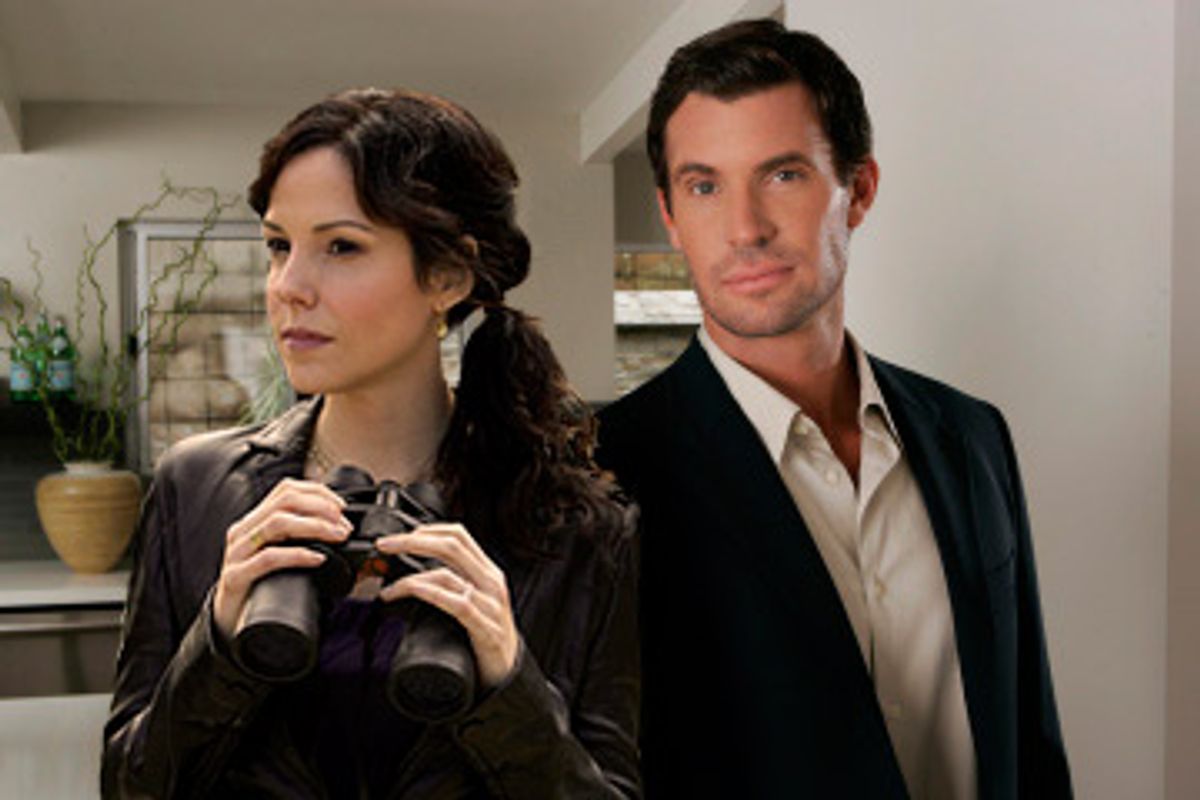 The hardworking men and women of America are what make this country great! We'd thank them ourselves, if we knew any. Sadly, all we know are soft-assed nitpickers and middle-managing mouth-breathers and tender-pawed desk ornaments with hair-trigger tempers. But you can be sure that we'd slap a hardworking fella on the back for a job well done -- if we weren't surrounded by overeducated hothouse flowers, lily-livered second-guessers, arrogant pencil pushers and self-proclaimed experts with corn-chip breath.

It wasn't always this way. In the old days, folks had calluses on their hands and dirt under their fingernails. My grandfather was a coal miner in Pennsylvania and his father scraped by in a tiny village in the Carpathian Mountains before making his way to the States. What would they say if they saw me now, reclining on my bed in bare feet with two dogs snoozing by my side? Would they feel shame in their hearts and call me a lazy, dog-loving whore? Would they gasp to see our once-great nation filling up fast with lackadaisical sons of bitches and ill-tempered neurotics who spend their days frowning at their computer screens?

The ghosts of our ancestors should take heart in the fact that, deep inside each of us, the burning desire of a working-class American hero breathes strong. Even after marinating in witty e-mails and alt-rock ballads and triple nonfat cappuccinos for a few decades straight, some small part of each of us wants to put our weak backs and wimpy arms to good use for a change, shoveling soil or hammering nails -- just for a few weeks, of course, or as long as it takes to get ripped abs and two mud-smudged meat Chiclets. And once we look like Marlboro men, we'll get fall-down drunk and stumble home to beat the ever-living crap out of our smartass kids so they won't grow up to be bloviating pudwhackers whose idle lives are made possible by the tedious toiling of working-class Americans!

Don't break the ice!
Yes, the romanticization of the working class has begun, springing from the self-loathing loins of a spoiled, flaccid nation in decline. What else explains the popularity of shows like "The Deadliest Catch" (about crab fisherman off the coast of Alaska) and the emergence of so many spinoffs, from "Ice Road Truckers" (about truckers in the Arctic Circle) to "Ax Men" (about lumberjacks in the Pacific Northwest) to the upcoming "Black Gold" (about men who work on oil-drilling rigs in Texas)?

Since most of us have forgotten the meaning of hard work, at least we can watch people work hard on TV. When we see these rough-and-tumble guys enduring dangerous conditions and eating their pride while their supervisors hound them, we're reminded that there are worse things in life than dry eyes, carpal tunnel syndrome and e-mails with an unnervingly passive-aggressive tone to them.

Take Hugh Rowland, aka "Polar Bear," the ill-mannered trucker with the dirty mouth at the center of "Ice Road Truckers" (premieres 9 p.m. EDT Sunday on the History Channel). Hugh's reputation as a curmudgeon precedes him, thanks to the show's first season, but his boss, Kurt Wainman, seems undaunted. "Lot of guys laughed and said, 'Hey, you got the asshole,'" says Kurt in a deadpan voice. "And I said, 'Well, you know, he'll probably fit in here.'"

But when Hugh discovers that his enemy Drew Sherwood will be working with him, he's a little less understated about it. "Holy fuck, you're workin' here, too?" Hugh grumbles. Last season, Hugh fired Drew. Drew thought Hugh shortchanged him on some money when he was fired. But Hugh says he almost hit Drew, who started talking back. "I said you don't say a fuckin' word 'til I'm done talkin'!"

It's not all that difficult to understand why these men might prefer to spend so much of their time alone, in the icy wilderness. This season, Hugh and the other truckers have relocated to Inuvik, a town 100 miles north of the Arctic Circle, where they'll carry massive loads an additional 100 miles north and over the frozen ocean to a natural gas exploration site.

Kurt has a few words of wisdom to share about Hugh and Drew's feuding: "I know their history -- I guess they don't get along. Like I really give a shit. There's a lotta guys that work here that don't get along. You know, tough it out, be men, take your crybaby shit home if you wanna argue about somethin'." My God, this man should be a management guru!

In fact, all of you One Minute Managers out there should really take a few tips from Kurt, who not only can't remember Drew's name ("What's the other guy's name? Dewey?" he asks the cameraman), but reduces fraught managerial interactions to the fewest words possible. When one guy quits in anger, this is how the exchange goes:

Trucker: I'm gonna love you and leave you. I don't know if it was a test or whatever, but standing around all day, I've got a bad taste in my mouth.

Kurt: Oh, so you're done, you're quitting?

Kurt drives off in his truck, and that's that. The Ten-Second Manager rides again!

Despite Kurt's stunning efficiency and similarity to a character from a Coen brothers film, he's got his work cut out for him: Most of the truckers seem to disapprove of one another without much provocation. Trucker Alex Debogorski says of blue-mohawk-sporting fellow trucker Rick Yemm, "You know, teenagers and the odd misled 20-year-old maybe will have blue hair, but if he hadn't used his private parts for toys, he would be a grandfather by now!" Yes, blue hair and casual sex are the markings of a wasted life, as far as Alex is concerned.

With so much colorful talk (Hugh, for one, can't finish a sentence without using the word "fuck" at least three or four times), the driving-over-a-frozen-sea thing sort of plays second fiddle here, which makes "Ice Road Truckers" a little less compelling than, say, watching crab fisherman cling to the deck as their ships are battered by the icy waves of the Bering Sea. There are a few dangerous moments in the first episode -- Hugh's brakes threaten to give out on his first run, which cues a menacing voice-over: "Driving on the ocean, the last thing you want to do is stop. Your heavy load becomes dead weight. That's bad news when there's only 3 feet of ice between you and 110 feet of frigid water, and the nearest person is hours away!"

But however dangerous the job might be, big mishaps and accidents are pretty rare, which leaves us with a bunch of men in puffy coats, rolling their eyes at one another's foolishness as they speed over the barren landscape.

There will be blood

For less curmudgeonly loners and more macho hard hats straight out of the latest Playgirl calendar, you'd better tune in for "Black Gold" (premieres at 10 p.m. EDT Wednesday, June 18, on TruTV), where tough Texans wrestle with heavy machinery on oil-drilling rigs. The voice-over growls, "They could get slammed by the iron tongs, whipped by the steel chain, or crushed by the ten-ton blocks!"

"Is that a promise?" we cruel tender-paws at home idly wonder, before we're hit with another wave of self-hatred and guilt. But we wouldn't feel quite so worthless if we worked hard wrangling massive, spewing pipes all day long like those sweaty, muddy, macho men ...

Unfortunately, though, that long-awaited high-capitalist orgasm doesn't come until we've sat through hours of tedious, repetitive foreplay: Turn the pipes. No, harder. Slower. Faster! Be careful. Don't stand there! Not there, here. Watch it! Look out! She's gonna blow! Duck!

"If I see you stick your fingers at the bottom of that pipe, I'll cut that son of a bitch off," one of the drillers (who supervise the other men who work the rig) tells one of his men. And then, he says to the camera with a smile, "Don't put yer fingers nowhere you wouldn't put yer pecker!" Well, that narrows down your choices considerably.

Not surprisingly, these charmers tend to socialize a little more than the "Ice Road" loners. One driller named Tim goes out for his 31st birthday and orders eight shots at a time, then tries to start a fight outside the bar. Meanwhile, his underling Derek is using his powers of persuasion on a member of the fairer sex. "I wanna hang out with you," he tells the stranger. "For real, though, for real: You're so fine!" Someone needs to warn that boy that his private parts aren't toys. Doesn't he want to be a grandfather someday?

Unfortunately, about halfway through the second episode, it becomes clear that working on an oil rig is as repetitive as it is dangerous: The iron tongs and the chains and the pipes are pretty much it. Sure, there are personnel changes (Tim skips work the day after he gets wasted, and is fired when he shows up) and equipment malfunctions along the way, but let's face it, near accidents and minor barroom skirmishes don't really touch traversing a stormy sea in the dead of winter, hauling up enormous cages full of crabs.

But don't tell that to oilman Mike LaMonica, who believes that drilling is part of his patriotic duty. "Anything we can do in our own country to make our own oil and to take care of American people, I want to do it. Get those boys home."

Who knew that profiting from a rapidly vanishing commodity was such a noble pursuit? You can almost see a mustachioed Daniel Day-Lewis gritting his teeth at the smugness of this oilman. I drink your milkshake, Mike LaMonica! I drink it up!

Those who are less interested in macho working men and more interested in blue hair and casual sex and the idle life of the big-city lesbian might enjoy the hopeless awkwardness of "Gimme Sugar" (premieres 10 p.m. EDT Monday on Logo). But be forewarned: If you thought it was impossible for any show to be more insipid and staged than "The Hills," rest assured that "Gimme Sugar" flails in "The Hills'" massive, pop-cultural wake like the Little Gay Tugboat That Couldn't.

Yes, of course, we want the little gay tugboat to chug, chug, chug along and whip up a pop-cultural frenzy all its own. But spend a little time with Charlene and her crew, with their endless tittering and their cue-card conversations and their bad '80s outfits, and you'll find yourself craving Heidi Montag's company like never before.

Here's a quick summary of the first two episodes, from the mouths of the babes themselves:

"Your girlfriend is here, and you're, like, making out with another girl right now?!"

"The girls and I were having a very interesting conversation about starting our own club night!"

"You guys, we have to get Charlene to do this with us!"

This is what happens when you take aimless, untested young people, give them an arbitrary task (promote a lesbian night at a club) and film the whole thing. It's like being forced to hang out with peppy, self-satisfied teenagers. Nobody wants that.