John McCain and his national security advisor both want to get tough with Russia -- but one of them got paid to say so. Does McCain have another lobbyist problem? 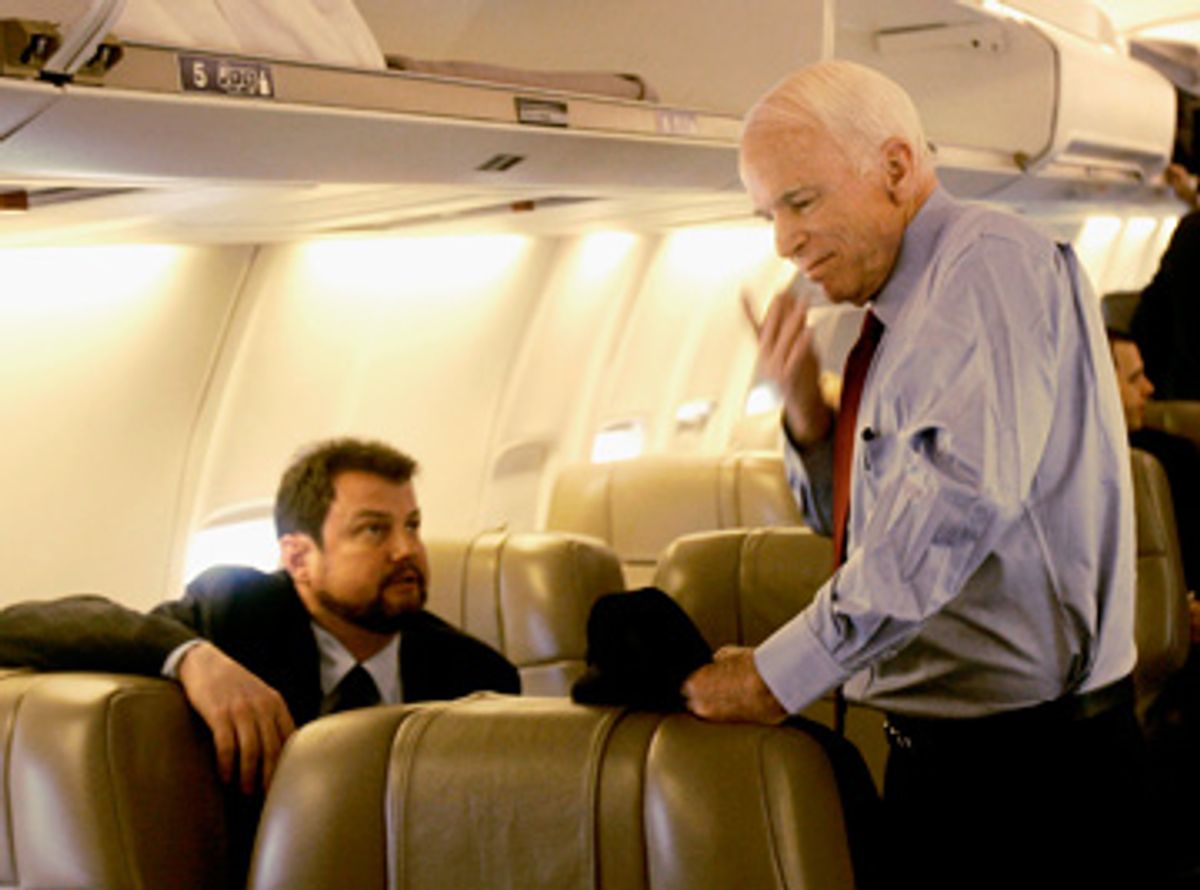 John McCain is a saber-rattler when it comes to Russia. On the campaign trail, the Republican presidential candidate warns of the "dangers posed by a revanchist Russia." A quick Google search produces video of McCain plodding through his oft-repeated joke that when he looks in Vladimir Putin's eyes, he sees three letters: KGB (and not, like George Bush, Putin's "soul").

As president, McCain says he would back up his tough talk with equally aggressive policies. He wants to kick Russia out of the Group of 8, the organization of the world's leading industrial powers. McCain has also long been a proponent of quickly expanding NATO to include former Soviet allies like Georgia. Russia bristles at the notion of the Western military alliance encroaching on her border. "Rather than tolerate Russia's nuclear blackmail or cyber attacks," McCain said in a March speech, "Western nations should make clear that the solidarity of NATO, from the Baltic to the Black Sea, is indivisible."

This kind of talk -- in particular the call to oust Russia from the G-8 -- has given pause to seasoned experts on that part of the world, who tend to emphasize engagement with Russia. McCain's harsh rhetoric and tough proposals led Newsweek's Fareed Zakaria to write an April column titled "McCain's Radical Foreign Policy." If McCain were to pursue his Russia agenda as president, Zakaria wrote, it would be interpreted by much of the world as an "attempt by Washington to begin a new Cold War."

But the sound of sabers rattling is music to the ears of Randy Scheunemann, the McCain campaign's senior foreign policy and national security advisor. A long-term confidant of the candidate, Scheunemann also supports a very tough stance toward Russia. Unlike McCain, until very recently he was paid to support that stance. McCain, already under fire for the role of lobbyists in his campaign, is taking his foreign policy advice from someone who was a paid lobbyist for former Soviet Bloc countries that are wary of Russia, and seems to advocate those policies the countries and their former lobbyist want. Notably, McCain supports a quick expansion of NATO, and Scheunemann has already helped two former Soviet satellites gain admission to NATO and has worked on behalf of two others.

Until early this year, Scheunemann was simultaneously working for the McCain campaign and as a lobbyist for a shifting menu of Eastern European and former Soviet Bloc countries with NATO aspirations. Some, including Georgia, have chilly relations with Russia. At various times from 2001 through early this year, Georgia, Latvia, Romania and Macedonia paid Scheunemann and his partner, Mike Mitchell, more than $2 million. Much of Scheunemann's work focused on paving the way into the NATO fold. Two of Scheunemann's clients, Latvia and Romania, were admitted to full NATO member status in 2004, after which they ceased paying him.

McCain, who has portrayed himself as a crusader against the corrupting influence of money in politics, has already been compelled to cut ties with lobbyists who have worked for his campaign. On March 12, a New York Times story noted that a co-chairman of McCain's campaign and other campaign advisors had lobbied for European Aeronautic Defense and Space Co., which beat Boeing for a contract worth $35 billion to build aerial tankers for the Air Force. The headline in the Times was "McCain Advisers Lobbied Europeans to Win Air Force Tanker Deal."

The bad press sparked efforts inside the McCain campaign to purge any real or perceived conflicts of interest. On May 15, the campaign instituted a new policy that bars staff from also working as "registered" lobbyists, requires unpaid advisors to disclose such activity, and prohibits those volunteers from trying to influence McCain.

The new policy was drafted by McCain’s campaign manager, Rick Davis, himself a lobbyist until 2006. The new rules quickly resulted in the departure of at least two advisors, including a key fundraiser, Thomas Loeffler. The European Aeronautic Defense and Space Co., which beat Boeing for the Air Force tanker contract, was one of his clients.

But the policy does not state that a campaign staffer can't be a former lobbyist. According to Justice Department records, Scheunemann halted his lobbying activities on March 12, the day the Times story on the Air Force tankers appeared. Scheunemann's partner continues to lobby on behalf of Georgia and Macedonia.

The neoconservative Scheunemann was a national security advisor to Mississippi Republican Sen. Trent Lott. He worked on Bob Dole's campaign in 1996 and McCain's failed 2000 White House bid. Like McCain, Scheunemann was an early and ardent advocate of regime change in Iraq. He helped draft a 1998 bill giving $98 million to the Iraqi National Congress, the exile group led by the controversial Ahmed Chalabi. In the early days of the Bush administration, he served as an advisor on Iraq to former Defense Secretary Donald Rumsfeld. In 2002, prior to the invasion of Iraq, Scheunemann helped lead the Committee for the Liberation of Iraq, a nongovernmental, pro-invasion group that counted McCain as a member.

Lobbying disclosure records for Scheunemann's two-person company, Orion Strategies, show dozens of phone calls and meetings with McCain and his staff between 2001 and 2008, as well as regular contributions to McCain's campaign and political action committee. In 2006 McCain cosponsored legislation that passed the Senate endorsing an expansion of NATO to include Georgia and Macedonia as well as Albania and Croatia. Late last year, while Scheunemann was still on Georgia's payroll, Georgia got a shout out, by name, from McCain in a national security treatise published in Foreign Affairs. McCain warned of Russian efforts to "bully democratic neighbors, such as Georgia, and attempts to manipulate European dependence on Russian oil and gas." He also hammered on the "diminishing political freedoms" in the former Soviet Union, and wrote that the country was "dominated by a clique of former intelligence officers."

Incidentally, China also took it on the chin in that Foreign Affairs article. At the time, Scheunemann was working for Taiwan, which has paid him and partner Mitchell a half-million dollars since early 2005. (Scheunemann ceased lobbying for Taiwan in March; Mitchell continues to work for the Taiwanese.) "When China threatens democratic Taiwan with a massive arsenal of missiles and warlike rhetoric, the United States must take note," McCain wrote. Lobbying records show that as late as June 2007, Scheunemann's partner was lobbying McCain staffers on "Chinese ballistic missiles pointed at Taiwan."

During the presidential campaign, the presumptive Republican nominee has shown remarkable interest in Scheunemann's client, Georgia, a country of 4 million. In his statement last month on the inauguration of Russian President Dmitry Medvedev, McCain said he hoped the new president would "take steps to ease tensions with Georgia by reversing recently announced measures that undermine Georgia's internationally recognized sovereignty which have rightly caused great concern among our European allies."

McCain might take his hard line on Russia because it plays well with some of the GOP base. Experts on Russia say some of those Republicans harbor nostalgia for being tough on the Soviet Union. Or perhaps he simply believes Russia will respond best to threats. But there is little doubt that McCain's rhetoric and policies would please the countries Scheunemann has worked for.

"Those are countries whose advantage it is to point the finger at a Russian threat, particularly Georgia," explained Thomas Simons, ambassador to Poland under George H.W. Bush and to Pakistan under Bill Clinton.

There is no way to tell if Scheunemann has influenced his boss on behalf of his clients, or if McCain and Scheunemann simply share a common get-tough-on-Russia philosophy. But when there are lobbyists on a candidate's campaign staff, it's hard to distinguish chicken from egg when it comes to policy.

"The whole point of lobbyists is to influence how politicians think," said Dmitry Gorenburg, executive director of the American Association for the Advancement of Slavic Studies and a lecturer at Harvard. "If these people have had an association for a long time, how do you tell if it is because they think alike, or one has told the other how to think because he is getting paid?" he asked. "Any time you've got a guy who has been lobbying for somebody as opposed to a regular observer, it sort of makes you wonder," said Gorenburg, who also thinks the hard-line approach with Russia is the wrong way to go. "My guess is that you cannot completely disentangle the influence."

The campaign did not respond to Salon's questions about this topic. But McCain spokespeople have said in the past that any similarity between lobbyist interests and McCain's actions is coincidental. Jill Hazelbaker, McCain's spokeswoman, has said that her boss has "never violated the public trust, never done favors for special interests or lobbyists."

While McCain's plan to kick Russia out of the G-8 is widely unpopular, Democrats also support expanding NATO -- but more gradually and with Russia's concerns carefully taken into account. At a meeting at the Council of Foreign Relations on March 7 that included Scheunemann, the Democratic candidates' national security advisors said McCain was too confrontational with Russia.

"Where I get a little bit concerned, Randy, is when you sound like you're issuing ultimatums in a variety of fronts without finding ways to be able to talk and discuss and work through our issues as well," said Mara Rudman, a Clinton advisor.

Scheunemann took a hard line. "No outside country has a veto on [NATO] membership," he said. "With Russia, I don't think Senator McCain's position is secret to a lot of folks," he added. "He often likes to say when he looks into Putin's eyes, all he sees is a K, a G, and a B."

Simons, now a visiting scholar at Harvard's Davis Center for Russian and Eurasian Studies, was one of a number of experts interviewed by Salon who believe McCain's hawkish Russia policy is counterproductive. "It is not the right way to deal with this part of the world," Simons said. He described McCain's strategy as "punish and challenge, hit them in the nose, stick them in the eye."

Given the concern about McCain and his advisor's aggressive attitude toward Russia, a recent speech the candidate delivered about nuclear nonproliferation left many Russian experts scratching their heads. In a May 27 address in Denver, McCain struck a strangely conciliatory note, laying out "a vision not of the United States acting alone, but building and participating in a community of nations all drawn together in this vital common purpose," he said. "While we have serious differences, with the end of the Cold War, Russia and the United States are no longer mortal enemies." McCain then announced that he would seek a new arms control agreement with Russia.

Russian experts, who have eyed McCain's confrontational tone with some skepticism, were obviously confused. Charles Kupchan, a professor of international affairs at Georgetown University, said the speech left him thinking that McCain's policy toward Russia is "schizophrenic."

"It is just contradictory," explained Kupchan. "If you really want a breakthrough arms control deal with the Russians, it is probably not a good idea to kick him out of the G-8."

Other experts speculated that McCain has set aside the tough talk now that the reality of the presidency is staring him in the face. It would be wonderful if the change didn't have anything to do with less money changing hands.