"I now pronounce you wife and wife" 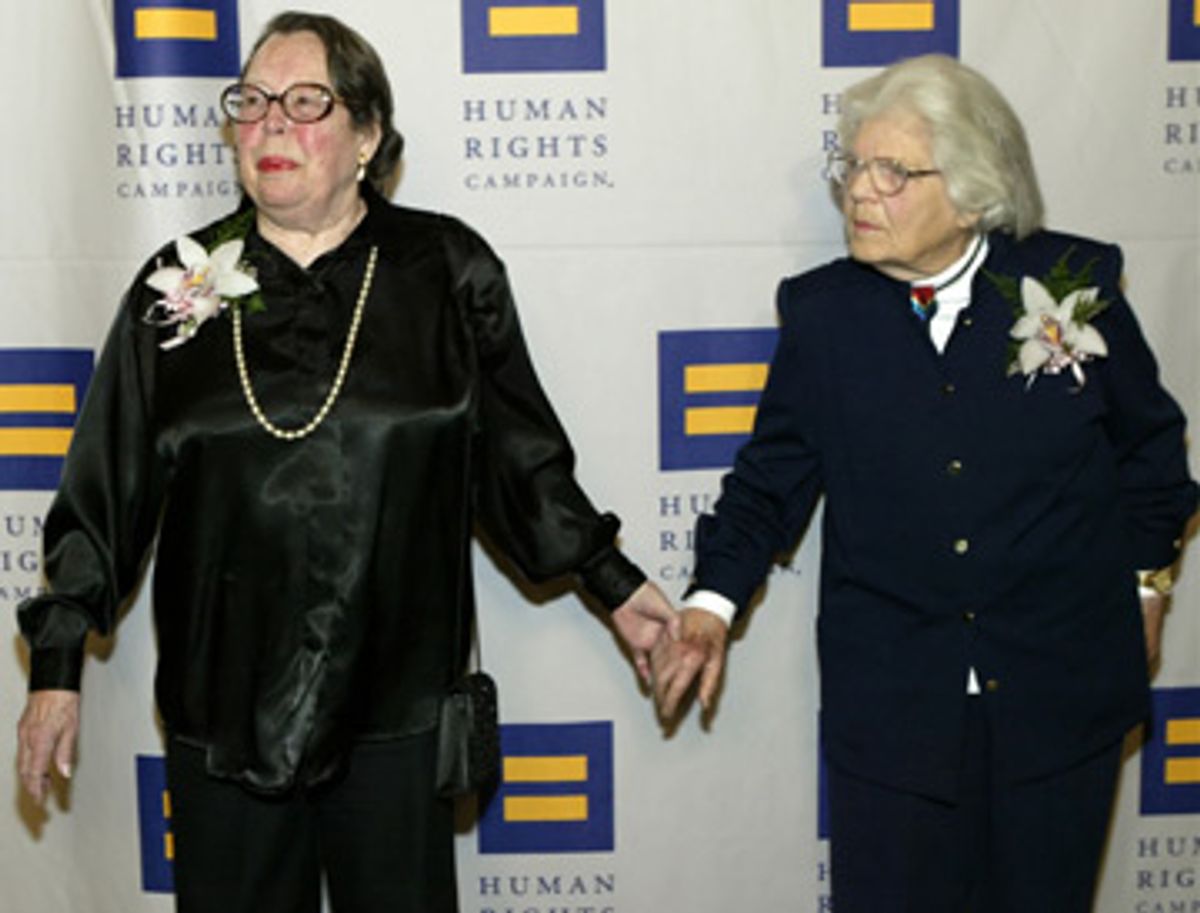 If you cry at weddings, grab a hankie; the news of these upcoming nuptials already has me tearing up at my desk. Next Monday, June 16, at 5 p.m. PDT, Mayor Gavin Newsom will preside over the marriage of Del Martin, 87, and Phyllis Lyon, 83, at San Francisco City Hall, the San Francisco Chronicle reports.

You may well remember these two brides from their first trip to the altar back in February 2004. Martin and Lyon, who have been together more than 50 years, were the first same-sex couple to be issued a marriage license by the city of San Francisco. (For a refresher, their iconic wedding photos are here and here.)

Mayor Newsom has said that Lyon and Martin's love story inspired him to start issuing marriage licenses to lesbians and gays. But the couple's first marriage license and those of more than 4,000 other couples who got hitched during San Francisco's Winter of Love were later ruled invalid by the courts. Undaunted, Lyon and Martin became plaintiffs in the lawsuit that in May led the California Supreme Court to rule that same-sex couples do have a right to marry.

This isn't the first time that Lyon and Martin have broken new ground. Back in the '50s, they were also pioneers, founding the country's very first lesbian organization. "The couple first met in Seattle in 1950 and moved in together in a Castro Street apartment on Valentine's Day 1953," reports the San Francisco Chronicle. "Two years later, Lyon and Martin and three other lesbian couples founded the Daughters of Bilitis, which historians call the first lesbian organization in the United States. Lyon and Martin have been leaders of the lesbian community ever since. Their organization's monthly magazine, the Ladder, was an influential publication in the LGBT rights movement and began publication in 1956. Both women were inducted into the National Lesbian and Gay Journalists Association Hall of Fame. A San Francisco medical organization founded in 1979 as a clinic for lesbians -- Lyon Martin Health Services -- was named for them."

The state of California officially starts issuing marriage licenses to same-sex couples on the morning of June 17. But California has granted permission to San Francisco to start conducting same-sex ceremonies at 5:01 p.m. on June 16, after the state's official workday ends. In deference to their pioneering role, Lyon and Martin's wedding will be the only same-sex marriage held in San Francisco on the evening of June 16. The next morning, same-sex couples around the state will be free to marry, too. Kate Kendell, executive director of the National Center for Lesbian Rights, think it's fitting for San Francisco to honor Lyon and Martin's lifetimes of activism by letting them go first: "At a time when being openly gay cost you everything you cared about, they were. And they took risks and spoke out from the 1950s on in a way that I certainly do not believe I would have nor would most of us," Kendell said. Inviting the couple to be the first to marry "is the absolute least we can do to acknowledge how critical their legacy is to the lives of all of us."

(The photo at the right shows Lyon, on the left, and Martin arriving at a Human Rights Campaign gala in Los Angeles on March 6, 2004. Photo by Reuters/Lucy Nicholson.)

Lyon told the San Francisco Chronicle that it's "heartwarming" that San Francisco wants her and Martin to be the first couple to marry, but ever the activist, she said that what really matters is that so many other couples will now have the chance to do so, too: "Hundreds of thousands of couples will be getting married this time, and that's the important thing," Lyon said. "It's something that has been due for a long time, and thank God, it's here."